Skip to content
Geocaching and Maps, History and Genealogy, Rambling 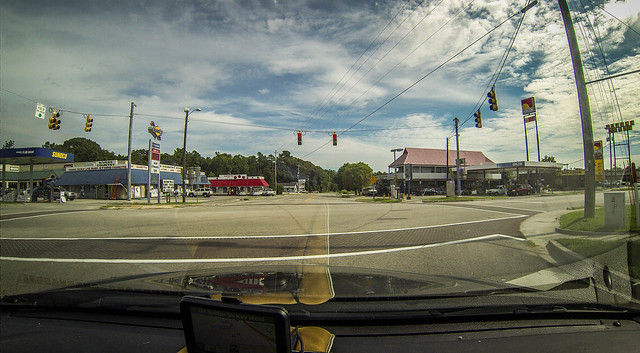 For some reason the town of Santee intrigues me. It’s something of an anomaly compared to the other cities on the Tobacco Trail. There is no main street or central business district. Those features make me think that the town as, say, Orangeburg, Allendale or Bamberg. I decided to find out more about it. In the process of that research I discovered a new ghost town.

What caught my eye first was the old bridge over the lake, the one with these concrete supports: 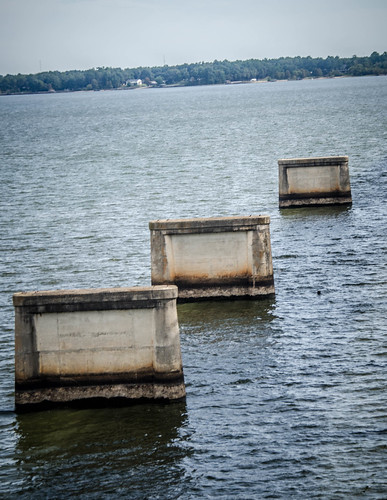 I decided the best way to do this was to look at old maps of the area. I knew the following: First, the lake was built in 1938. In 1947 301 was extended from Florence to Santee, following the former SC Highway 4 and running concurrently with US 15. US 15 itself replaced part of US 401 through the area, which had followed a somewhat zig-zag path that didn’t make much sense. 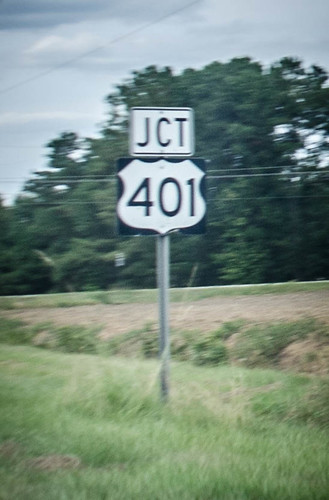 The question was…which of these had been the original bridge? To answer that question I turned to the historic map digital collection at USC. I started with a map prior to 301. This is the 1921 Eutawville USGS topo map of the area. The location of the 301 bridge is almost off the map in the upper left corner of the quadrangle, and isn’t complete. Even so, you can see that the lake hasn’t been built and the only major road is a northwest-southeast route called River Road. More importantly, in 1921 the town of Santee is nowhere to be seen. 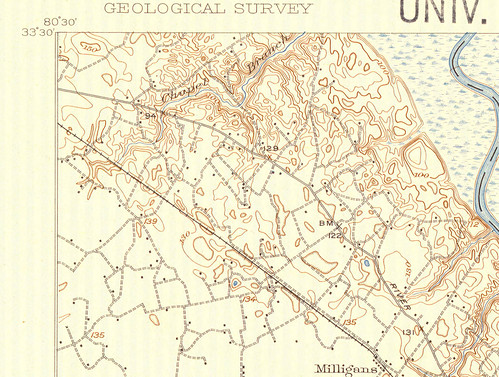 Oddly enough, the 1942 map still doesn’t show any of these features. 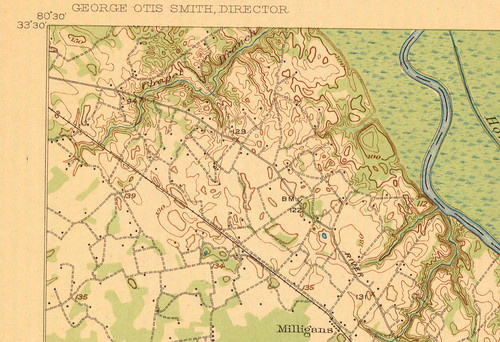 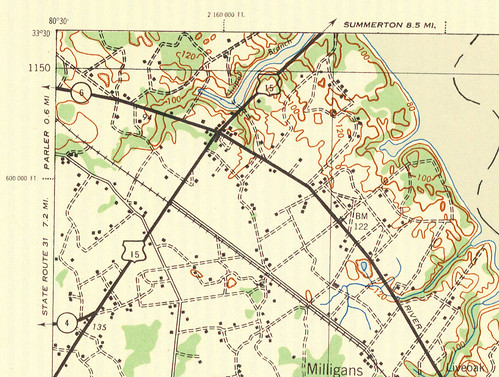 My focus was still on the bridge, though. Since I didn’t see anything definitive in the topo maps, I turned my attention to historical aerial photography. Even though the topo maps didn’t show a bridge through this area, a 1937 composite aerial clearly shows one. 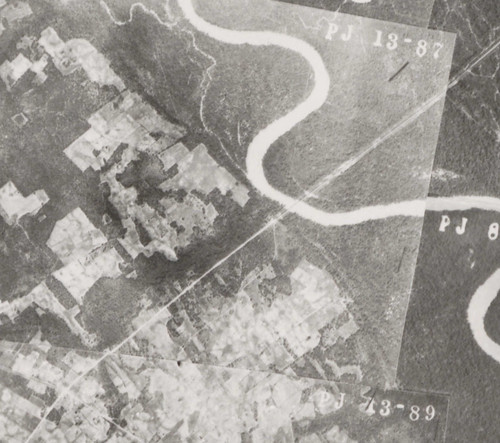 Time to turn my attention to road maps. The 1917 “Official Map of South Carolina” doesn’t show much detail. It looks like there are two bridges across the Santee River, but no way to know what roads these are. 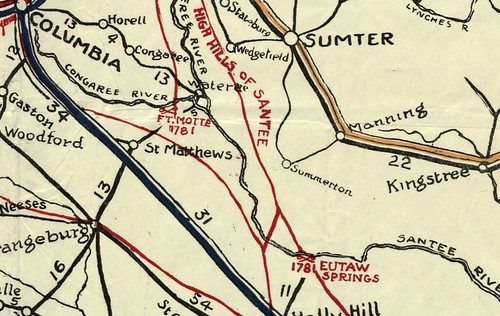 As for the town of Santee, I was having trouble finding anything official on it, either. There doesn’t appear to be any official town website. There are a couple of regional tourism sites, but nothing lists the date of incorporation of the town. I’m sure it’s in some official record somewhere. Finally on the Carolana website on their list of towns in South Carolina with post offices it says that the Santee Post Office was established in 1940. This would put it in 1940, after the lake was constructed.

What Carolana actually says is that the post office was once called Parler, and that in 1940 the name was changed to Santee. A 1938 transportation map of Orangeburg County actually shows both of these. Parler is indicated slightly to the northwest, and Santee is just give a place name without town limits. This map shows a road going “to Summerton” across the Santee River. 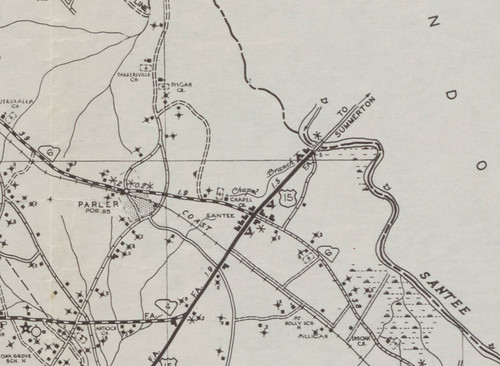 The 1951 version of this map shows the roles reversed, with Parler shown as a tiny place and Santee much larger. Now 301 and 15 are shown crossing Lake Marion to Summerton. 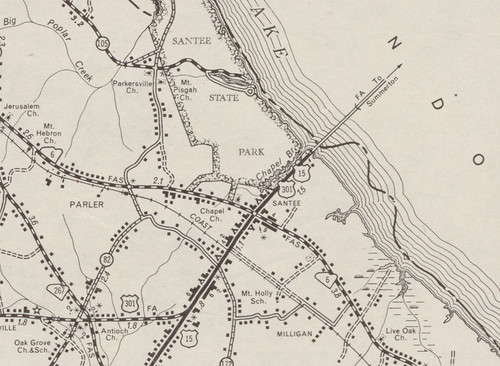 Even though I hadn’t found out much about Santee, I had discovered another ghost town – Parler. It shows up as more prominent than Santee in early maps, but I was curious how far back it goes. I found Parler on a 1913 soil survey map. No Santee, but this map does use the word “lake.” 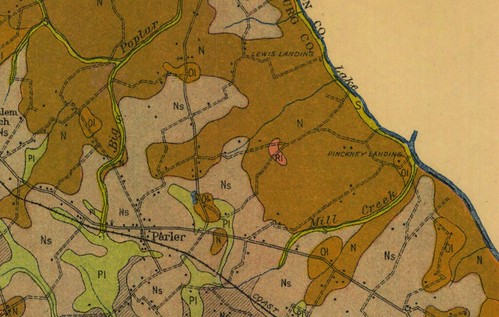 Turns out, Parler is even listed on Mill’s 1825 Atlas. In addition to Parler there is a location called Parler’s Store. 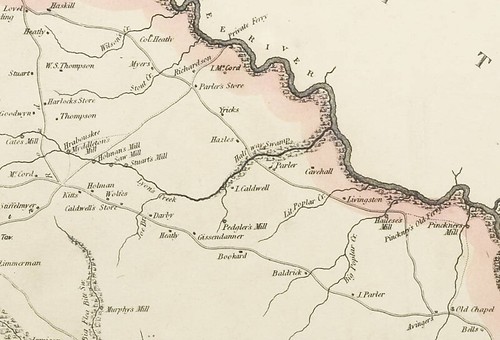 Now I was beginning to piece together a tale I’d seen played out many times before. Sometime after the Civil War the Poplar community was renamed for the family with the largest holdings in the area. Parler was on the railroad, and was a thriving farming community There was even a Parlerville to the northwest. They even had a bank. The Manning Times reported on December 22, 1920 that there had been an armed robbery at the bank.

As travel shifted from trains to automobiles, the population followed the transportation routes. Santee waxed and Parler waned. Santee was more fortunate than some of the Tobacco Trail cities, though. When I-95 came through it just shifted the motels a couple of blocks over. Plus, there was already a tourist draw with the lake and other attractions. Santee would be OK.

As I’m mentioned before in this series, sometimes it’s hard to tell if a motel’s demise was due to the transition from 301 to I-95, or if it was just the natural life cycle of a business. In the case of Santee, I think it’s as much the latter as the former.

Next up, I cross the bridge and find myself in Clarendon.

One thought on “The Rise of Santee on The Tobacco Trail”