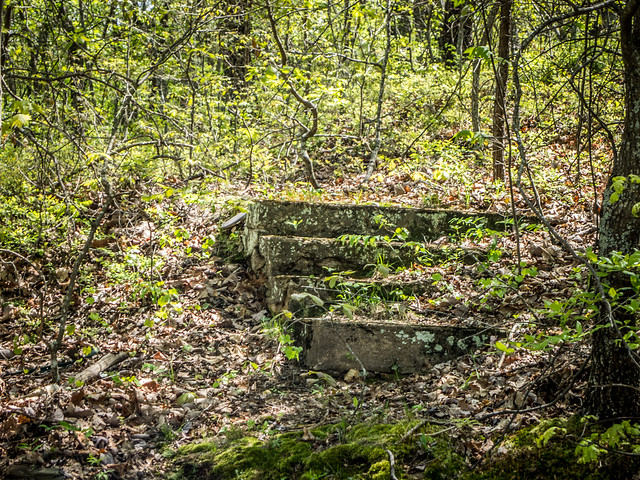 Ken and I had found one mystery on our outing on this particular Friday, but a second mystery was in the offing. Since we had access to the convertible we decided to drive up Altamont Road over Paris Mountain. Along the route we took a moment to drive up Tower Road to the top and admire the vista.

As we drove back to Altamont Road, I paused at a sharp bend to point out an old set of steps next to an overgrown dirt road. I made the comment that these steps were all that was left of the old Altamont Hotel that once stood atop Paris Mountain. 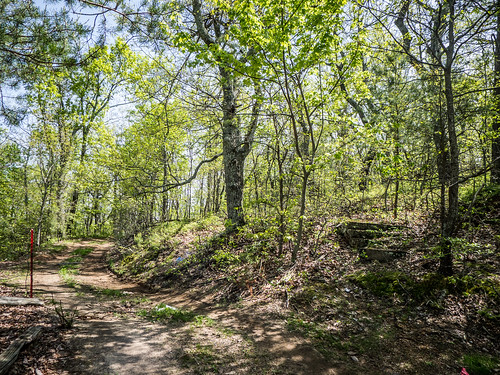 I’ve never poked around up there, but I’ve been tempted. My friend, Mark Elbrecht, explored the area back in 2012, but could find no conclusive remains of the hotel.

Mark provided a short history of the location on his blog:

The Altamont Hotel (also known as the Paris Mountain Hotel) was built in 1889, but was sold 8 years later in 1898 to Reverend N. J. Holmes. N. J. Holmes repurposed the hotel to serve as the home of the new Altamont Bible and Missionary Institute, with later name changes to Holmes Bible and Missionary Institute and to Holmes Bible College. The hotel would become vacant when the institute moved away to Columbia, then Atlanta, then to the city of Greenville. The institute sold off the hotel to help pay for the new Greenville location in 1918 to Augustus M. Hayes. Hayes had intended to develop the property as a modern resort or a sanitarium, but in 1920 the hotel burned down and wasn’t rebuilt.

The Altamont Hotel has been long in our family lore. My grandparents met at Altamont Bible College when they were there as teachers. My grandfather and N. J. Holmes also held tent revivals throughout the area. 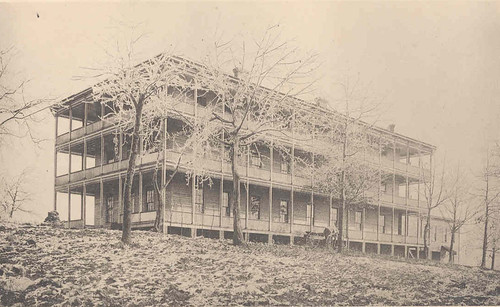 Later that day I posted my photograph of the old steps to one of the Greenville interest groups on Facebook. I got lots of comments, but one in particular kind of turned my understanding of the location of the hotel on its head (I’ve added paragraphs for clarity):

Thank you, Tom. I always assumed it was there before I started researching it. Now, I’m just not sure. We could find no deeds for the property. While most written accounts state it was located on the “top” of Paris Mountain, some recorded patrons of the hotel say otherwise. One stated the hotel was less than a mile up (Altamont Rd) from Buncombe Rd. (It is over 2 miles to the summit.) From the hotel, it is stated, one could see both the village of Greenville and clear views of Glassy Mountain, Tyger, Enoree, and Saluda Mountains, Table Rock, Caesar’s Head and parts of Georgia. (Don’t think that is possible from the Summit but from some lower elevations it is).

Mann Batson told us that, although, he could not take us to the exact location, he remembered that there was a pond across the road and a conveyor belt that carried water across the road to the hotel. (We could find only two ponds on Altamont Rd. Neither are near the Summit, but one is about a mile up from Buncombe Rd and the land levels out so those views are possible). The research has been interesting and very informative.

Legend has it that Cherokee Indian chief, Walhassa, made his daughter, Talawa, and son in law promise to protect their mountain from the pale face below when he died. The son in law sold the land for beads for his wife. She was so angry that she stabbed him to death and killed herself in loyalty to her father.

So, not only does this bring into question the location of the hotel, but it adds yet another doomed Indian maiden to my growing list.

There is a small lake not far from the summit. Mark found pipes that might lead in that direction. However, my Facebook contact thinks the elevation change and distance would be too great.

My Facebook contact also said that she had not been able to find any deeds for the property, and that she had contacted the present-day Holmes Bible College, and they didn’t have any historical documents. Turns out, Mark had linked to the original deeds in his post. The problem was that for some reason they were not downloading correctly as PDFs. I was able to convert them, and then reposted them on my Google Drive account.

This first deed is from 1893, when N. J. Holmes first purchased the property.

The second deed is from the sale of the property in 1912. My grandfather is listed as one of the trustees on the deed.

Each deed has a description of the boundaries of the property, but the language uses landmarks that are long gone.

All that tract or parcel of land situate, lying and being in Greenville County, South Carolina, on the waters of the Reedy River and Mountain Creek, waters of the Enoree River, and having the following lines, metes and bounds, to-wit: Beginning at a pile of stone 3Xom, originally a red oak on the Paris Mountain Road, and running thence S. 23 E. 16.50 to a stone 3XoM gone, relocated 3Xrm; thence…

…and so on, listing lots of rocks and trees as reference points. For our purposes the location of the hotel is still a mystery. I guess we could have a surveyor locate this, but I’m not ready to go through that expense.

I still maintain that the hotel was where we suspected, at the top of the mountain. The steps in question were pointed out to me by my father, who, in turn, had them pointed out by his father who had taught there. I think that’s a pretty strong argument, so unless it’s shown otherwise, I’ll still consider that the location of the old Altamont Hotel.

29 thoughts on “The Mystery of Altamont Hotel”