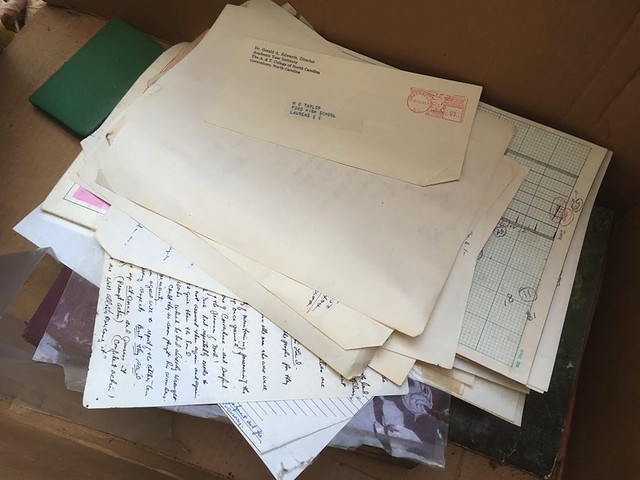 Most of our discoveries were about my dad. It’s not that my mom was any less important, but she tended to be more private, Plus, she threw away stuff. There may have been just as many discoveries waiting to be found for her, but we may never know. She was living in the Prosperity house at the time of Dad’s death in 2011, and went through tons of records disposing of anything she deemed unimportant, regardless of its possible interest to us. And that’s OK. To her it was part of the process of mourning.

Dad, though, was a prolific writer and meticulous record keeper. While Mom did a pretty good job of cleaning out the Prosperity house, we found boxes upon boxes of sermon notes and other items of his while cleaning out the Gray Court house and getting it ready to sell. 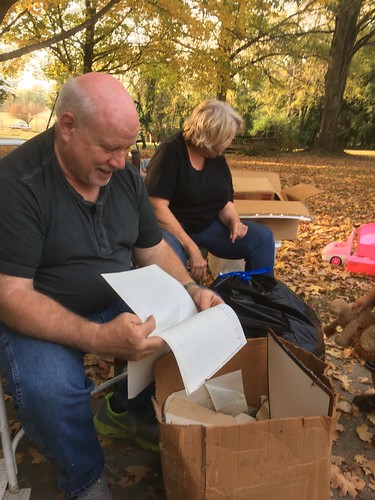 The saga started in late November. Glynda’s son-in-law, Aaron, and I were tasked with cleaning out my dad’s old office. Aaron was perfect for the job. His ex-military efficiency made quick work of the task. Plus, he had no emotional attachment to some of the junk we were going through. I followed his lead, but there were a couple of things that caught my eye. These would have been inconsequential to anyone who didn’t know the family history.

While Dad may have been a meticulous record keeper, he wasn’t exactly organized. We found many random boxes of papers that contained all kinds of things. Some of these were school-related, like his teaching certificate and bus driver’s license. 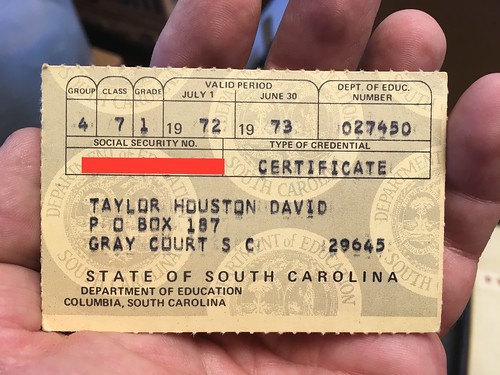 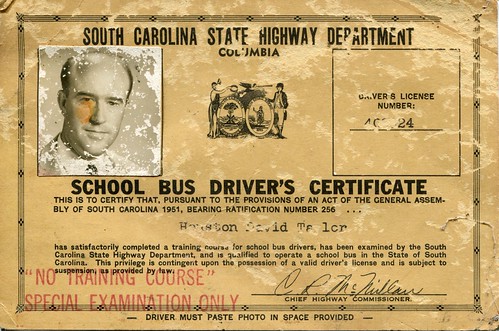 Others weren’t limited to family interest. This is an original copy of the Greenville News from November 23, 1963, the day after Kennedy was assassinated. I remember finding this same paper once when I was living in the house, tucked back in the back reaches of a bookshelf. Seeing the news in its original form was more visceral than I thought it would be. I was too young to remember the assassination, but the accounts were chilling, none-the-less. 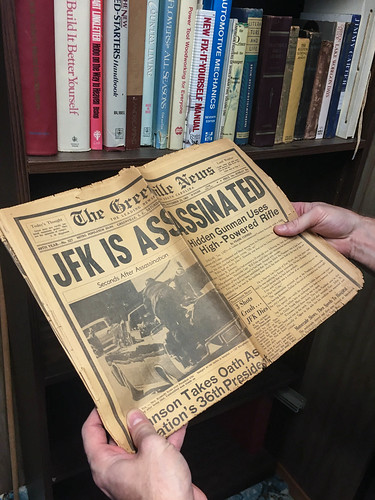 Dad had already given away most of his Bible commentaries and theology books, so most of what was left in the office were old literature books and how-to books. I came across a biography of Winston Churchill that Dad had given me at some point. It went on the pile for Goodwill along with most of the others.

One book looked as unimportant as these until I opened the cover. Inside was a handwritten inscription. It was given to my dad by my mother for his birthday in 1947. They would be married later that year in November. I hung onto that one. 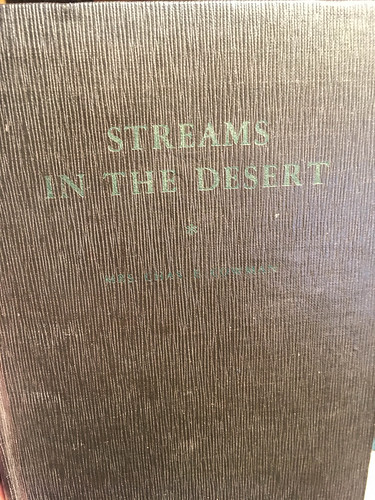 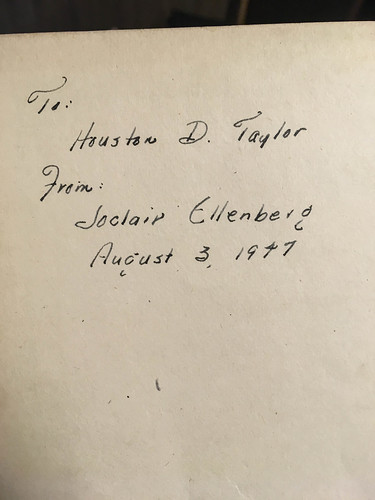 Dad had a very distinctive signature, and I wanted at least one good sample. I found one in an old date keeper. 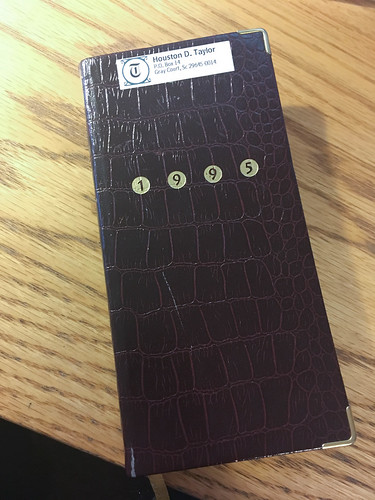 The problem with having such a distinctive signature was that we all learned how to forge it. I remember having one bad grade on a test that I had to get signed. That skill came in handy then.

However, my dad’s signature wasn’t the only one I found. There was one theology book published 100 years ago, in 1916. My grandfather had signed it and dated the signature that same year. He always signed things, and was referred to as “O. E. Taylor.” I’d heard that he wasn’t fond of his first name, Oscar. 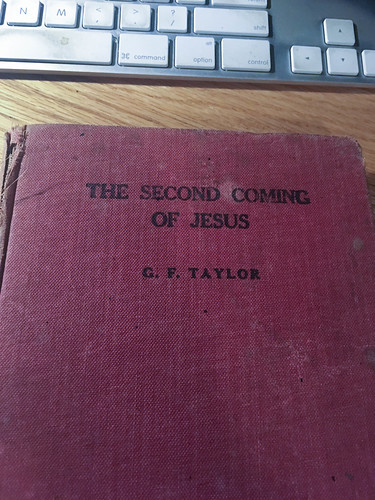 There were a couple of old books related to Holmes Bible College, where my grandfather had taught. 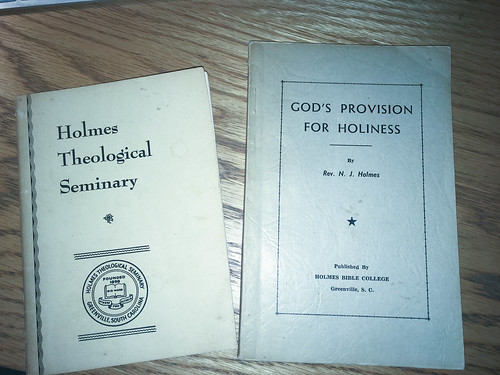 The drawers of Dad’s desk held mostly old financial records. We were kept our eyes open for sermon notes or anything else Dad might have written. We didn’t find much, but I did find a single sheet of notebook paper. It had the hand-written outline for a funeral service that my dad had conducted, along with a clip of the obituary. 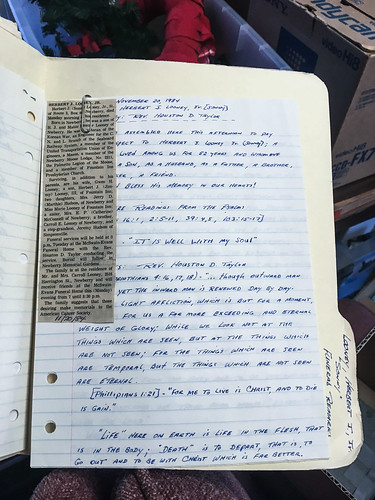 It was in the out buildings that we found boxes of papers. In the attic of the garage, the attic of the OLD garage, and in the shop we found several boxes of sermon notes and other items. Most of these were so deteriorated that we just had to throw them away, but some proved interesting…and puzzling.

We found a life insurance policy that posed more questions. It was actually two policies, one for $5000 and one for $1000…on ME! These were issued shortly after I was born. So far we have no record of similar policies on any of my siblings. So, why? Was I not expected to survive? Mom had a miscarriage before I was born. There might have been an eighth Taylor child between Stephen and me. Might that have prompted this action? It’s also possible that Dad did this for all of the kids, but we just didn’t find those policies, but it made me feel a bit weird.

I don’t know if it was for a course assignment, but for some reason Dad made a chart of his life. Finding this was actually a goldmine for Stephen and me, because we always had some gaps in our knowledge as to what Dad had done when. He first started with just a timeline calendar, but had then turned that into a pie chart. On the pie chart he had projected his life expectancy as 72, the age his father had died. 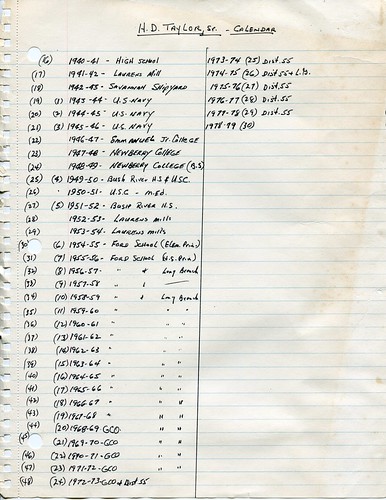 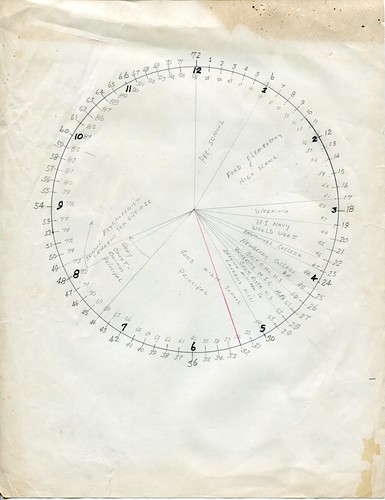 Dad had several medals from his time in WWII. My sister Ann had taken these and placed them in a beautiful frame some years ago, and they had been on display at the house in Prosperity. He had a Purple Heart as well as medals for the various theaters in which he had been involved. In my mind I had always pictured him as receiving them in some medal ceremony, kind of like the one at the end of Star Wars, or in all of those movies where you see some official pinning a medal on someone else. Turns out the reality was quite different. One piece of paper we found showed that Dad had received the medals in 1966, many years after the war. I guess that stands to reason. So many fought in that war, and each were presented medals for service. A ceremony could only be held for the most important. 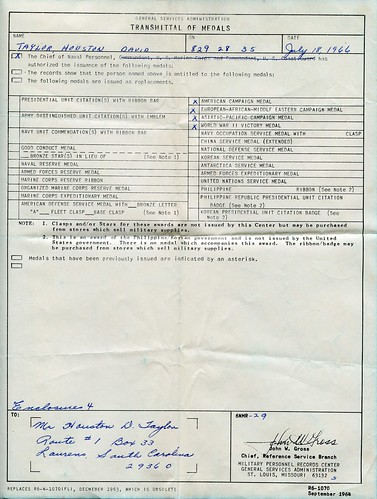 As mentioned, there were tons of sermon notes. This one seemed to be especially timely. I have no idea when Dad actually wrote it. He had a habit of typing out his notes, first on an old Smith Corona typewriter, and later on computer. He would type it on whatever paper he had handy, but seemed to prefer smaller notes that he could tuck into a pocket. 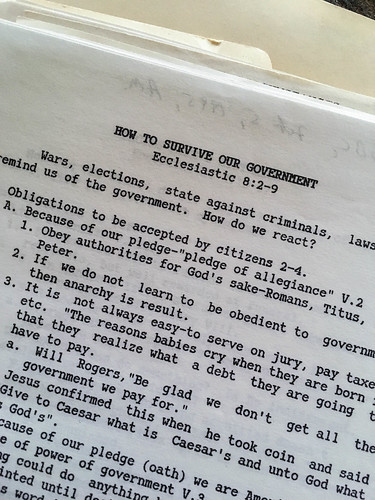 There were news clippings, very old theology papers, and some items that just defying explanation. 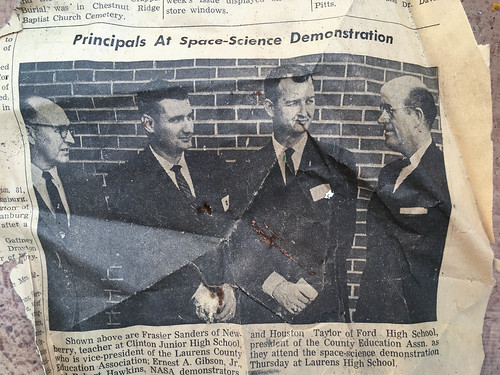 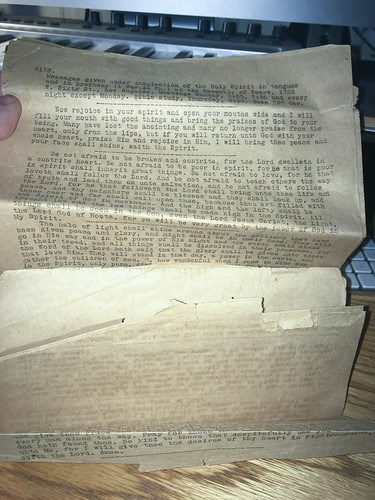 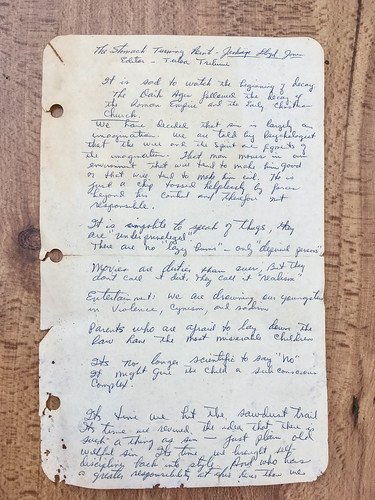 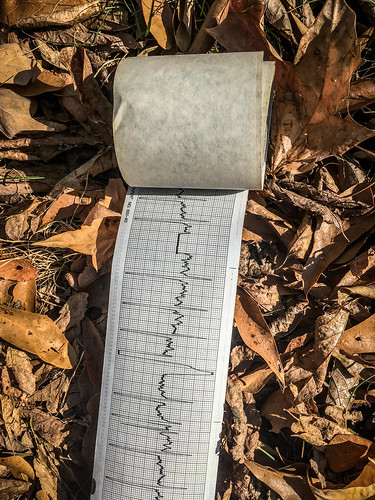 Two items really caught the attention of Stephen. First was a rather morose and stilted poem written by my father, date unknown. As was typical, it was typed on an old typewriter. I transcribed it, correcting some of his punctuation and grammatical errors. 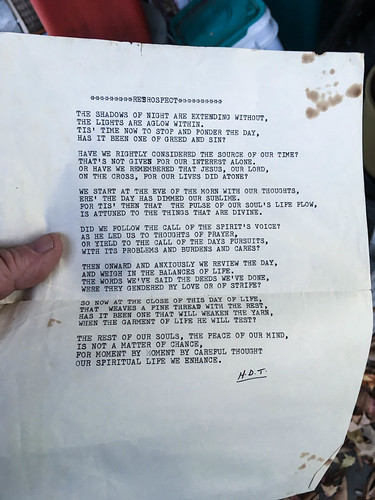 The shadows of night are extending without,
The lights are aglow within.
Tis’ time now to stop and ponder the day,
Has it been one of greed and sin?

Have we rightly considered the source of our time?
That’s not given for our interest alone.
Or have we remembered that Jesus, our Lord,
On the cross, for our lives did atone?

We start at the eve of the morn with our thoughts,
Ere’ the day has dimmed our sublime.
For tis’ then that the pulse of our soul’s life flow,
Is attuned to the things that are divine.

Then onward and anxiously we review the day,
And weight in the balances of life.
The words we’ve said, the deeds we’ve done,
Were they gendered by love or of strife?

So now at the close of this day of life,
That weaves a fine thread with the rest,
Has it been one that will weaken the yarn,
When the garment of life he will test?

The rest of our souls, the peace of our mind,
Is not a matter of chance,
For a moment by moment by careful thought
Our spiritual life we enhance.

Second was a diary that Dad kept for awhile. The diary was pre-printed with dates starting in January of 1956, but Dad began it in the summer of that year. He continued through 1957, just changing the dates in the calendar as needed. It makes for a confusing record, but does provide some more insight in the family’s daily life. It looks like this might have been a recommendation by the Pentecostal Holiness Conference. The first entry is June 23, 1956, the beginning of the conference year. For some reason Dad lists the ages and weight of the entire family. I wasn’t born yet. 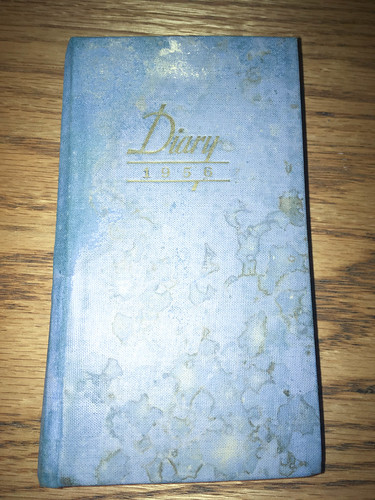 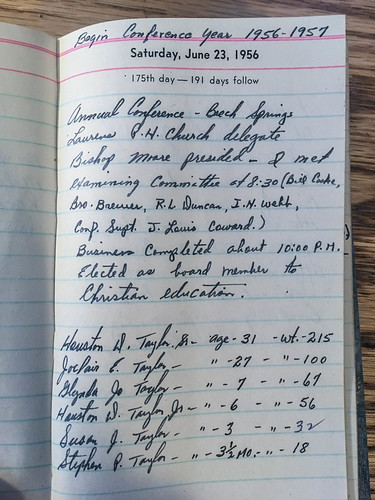 As with most diaries, this one started out verbose, but got shorter as the school year picked up. Most of the entries were rather mundane. Mixed with these were Bible verses and other reflections. 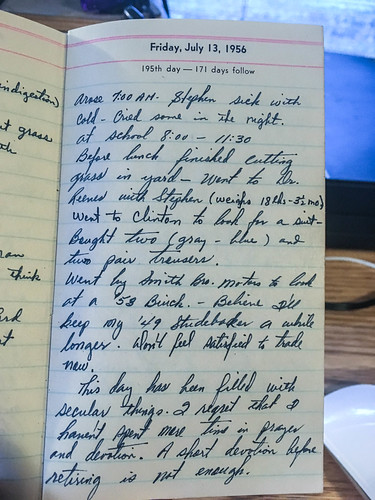 This day has been filled with secular things. I regret that I haven’t spent more time in prayer and devotion. A short devotion before retiring is not enough.

The diary goes on to list sermons topics that Dad preached, and where, and how much he was paid for them. (“Drove 18 miles in ministry.” “Preached on ‘Faithfulness of God’. Recieved $80 for revival services.”) They also detail his school dealings, including his search for a football coach for the high school. The diary shows that his religious views even influence his decision about coaching candidates.

The diary, coupled with the poem, paint a picture of a man trying to provide for his family, yet bound by very high expectations of piety. At least in these documents, it would seem that between Grace and Works, Works seems to be taking over his life. He was young (31!) and probably needing to prove himself in both fields, education and ministry. I’m glad that he did mellow and find time to enjoy life toward the end.

The Ephemera of Life can be astounding – so many bits of paper that reveal so much about how a life was lived. Most of this stuff we would toss away, but many of us are compulsive paper collectors. We are already going through Laura’s family things and making many discoveries about their lives. As I reviewed these materials I began to wonder about the ephemera of my own life. There is certainly this blog, but we have tons of photographs, financial records, news clippings, etc., etc. Since the mid-2000’s most of that has been digital. How will that influence how future generations see us? How much should we keep, and does it really matter?

As for me, I find this material interesting, but I really have no desire to keep these physical things. If someone in my family wants the the few papers I have saved, they are welcome to them. I have copies of the contents, and for me, that’s enough. 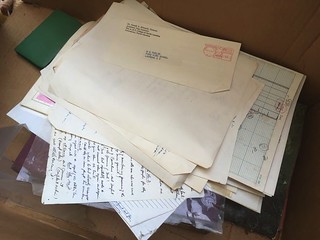 3 thoughts on “The Ephemera of Life”