I found my vest, and a distinguished gentleman with a pronounced accent came over and asked if I needed assistance. I told him I had found what I needed. He asked if I were headed to a holiday party somewhere. I said that I wasn’t, that I had several singing engagements and needed this for one of those events. That immediately got his attention.

The salesman, whose name badge identified him as M. El Rifahi, said that he loved music, but their family was so poor growing up that they could afford neither instruments nor lessons. He then proceeded to tell me that when he was 17 years old he had actually met Zoltan Kodaly, and had spent an evening talking with him. Kodaly was attending a concert in Hungary where one of his students was performing. The salesman was at the same concert, and somehow was able to spend time with him. Kodaly was 85 at the time.

I made the comment that I had played several Kodaly pieces once in a piano recital, and that I had been a music teacher and had used the Kodaly hand signals all the time. This made him open up and provide even more details of his life. Turns out he was studying medicine at the time. I asked him if he had completed med school, and he said he had, and had been a trauma surgeon for the past 35 years. He then began to tell me about all the concerts he had attended at the Vienna Opera House, as well as other famous venues all around Europe.

I really wanted to know more about Dr. Rifahi. Was he originally from Hungary? Where had he practiced medicine? What were the circumstances that brought him to the United States? What had led him to his current position as a salesman in Dillards? There were stories there, and I wish I’d had all afternoon to record them.

Sadly, our salesman-customer relationship was coming to an end. I had more questions about this unique individual who loved music. Especially in light of the current political debate over immigration, I really wanted to know more, if only to provide another example that the current xenophobes are terribly off base. I now had my sweater bought and paid for, and past the point of transaction, further questions seemed impolite.

Even so, I enjoyed our brief encounter. So, thank you, Dr. Rifahi, for the wonderful conversation. I wish you well, and a very happy holiday season. 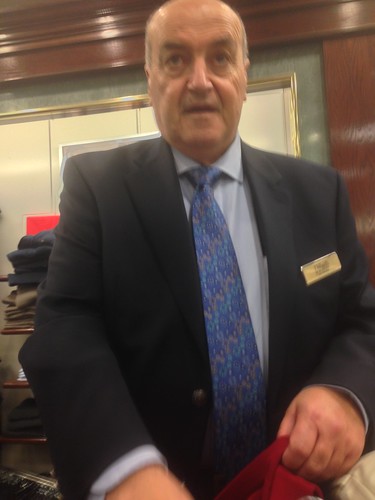 (And please don’t get mad at me for snapping your photo.)