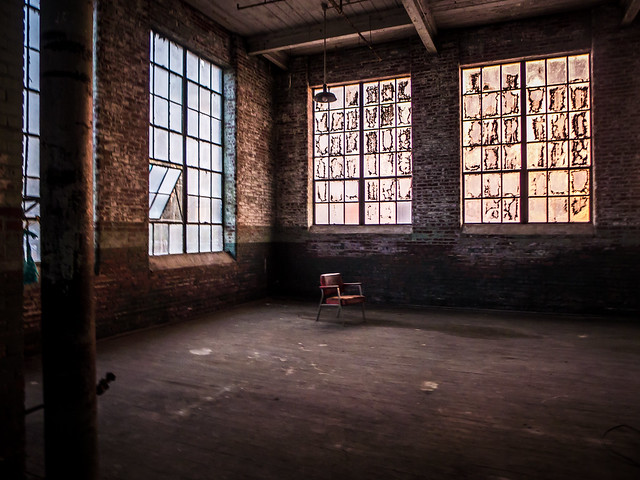 Last week I visited a new coffee shop in the old Southern Bleachery Mills in Taylors. This week I noticed that they were going to have live music Friday night, and that the artist studios I had seen on that last visit would be open for First Friday. After dinner in Greer, Laura and I decided to check it out.

At first she was quite skeptical. I took the back way, following Chick Springs Road from Greer into Taylors. It worked perfectly, but Laura had no clue where we were going. Her skepticism increased when I drove onto the old mill property. However, when she saw all the cars and activity, that skepticism diminished.

Due South Coffee was hopping. They had opened two of the large garage doors leading into their space, and we could hear the music all over the parking lot. However, we decided to check out the art studios first.

There are actually very few signs advertising studios in the building. Taylors Mill Properties advertises nearly 800,000 square feet of space available, so there is HUGE potential for studios. Yet, from the outside it’s hard to tell how many are actually there. Quite a few, as it turned out.

Our first stop was the studio of Jaryd Walley and Mobili Farm Tables. Jaryd’s tables are made from re-purposed barn wood and old doors. The results are beautiful distressed wood tables. The studio occupied a large space on the first floor across from the coffee shop. There were more studios on the second floor. Skiver Book Studio was at the entrance, and featured custom-bound books. There were beautifully bound leather editions and small expensive notebooks in the entryway. A hallway led past glass windows with a view into the workshop. We were soon to find that there were many more studios beyond. Artwork lined the hall, and soon we found ourselves in another suite with several small studios. Signs pointed toward more studios, and soon we found ourselves in the middle of the Rusted Palace Art Happening. A band was setting up, and sculpture and art by Allison Anne Brown and Carey Morton were on display. A band was tuning up, and others were loitering about. We wandered into the studio of Joe Everson. Joe does pencil drawings and acrylic work. Many of his pieces are comic book-themed. Laura liked the abstract nature of his pieces, and the minimalist approach to some of his work. She actually purchased one of his prints. Rather than stick around for the party, open doors leading off of the event space beckoned. If we were allowed to explore the interior of the old mill, then I was going to take advantage of the opportunity. However, I was now wishing I had my Nikon with one of my fast lenses, rather than just my little Panasonic.

Passing through a door we found ourselves on one of the crosswalks connecting sections of the mill. We had views down across the parking lot from the windows. On the other side of the crosswalk we found ourselves in a wide-open manufacturing space. 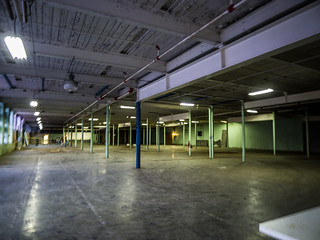 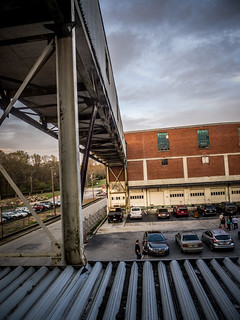 Caution tape blocked off portions of the floor where the flooring was rather iffy. There was light at the other end of the huge space, so we headed in that direction. There we found the pottery studios of William Felton. Felton’s studio was a teaching studio, with a circle of potter’s wheels. We had been told that the third floor of this build was called the “Ballroom”, and had incredible windows and lighting. I wanted to find a way up there, but it was tricky. We had to retrace our steps back across the second floor to the Rusted Palace space. Behind one of the art displays we found a semi-hidden stairway that led upward. There we found access to the second level of the crosswalk, and access to the Ballroom.

The ballroom did not disappoint. There we found a wide open space similar to the floor below. However, huge smokey windows and skylights let the setting sunlight filter through. It looks like the changing lighting in this place would be spectacular for a photo studio. At the other end of the Ballroom was accessed to the dramatic crosswalk across the entrance to this mill area. Maps of the event had this section marked as “closed”, but there was nothing to indicate that it was closed. I decided to explore, but Laura declined. On the other side I found yet another wide open manufacturing space. However, it was getting quite dark with the setting sun, and I didn’t want to get trapped in a space with no light, even though I did have a flashlight. I returned, and took a few shots of the setting sun through the dirty windows. We found even more open spaces opening off of the ballroom. It looked like there was LOTS of room for studios of just about any kind. By this time Laura was getting tired of exploring, and we were losing light. I wonder if we could get access to these spaces in daylight, just to explore. I may have to check that out. Regardless, we headed on out as the crowds continued to gather. Our stay was brief, but I’m glad to see so much activity in this old mill.

One thought on “Taylors Renaissance Revisited”