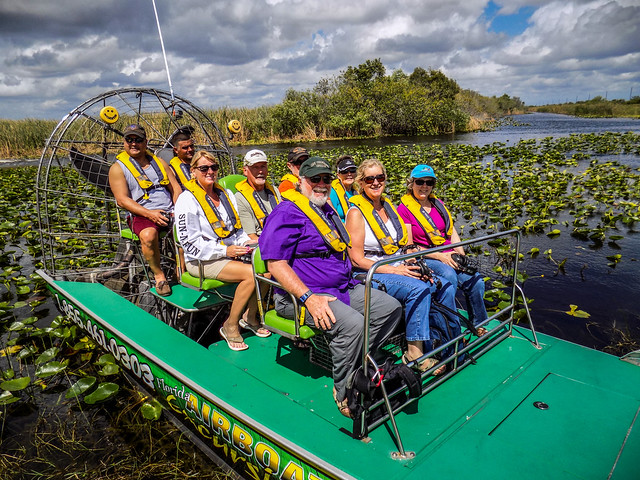 First impressions weren’t promising. The crowds were incredible, and we had to hustle for a parking space. Once we got parked, there was a line for restrooms, and they were in the most atrocious condition imaginable.

We watched as boats loaded and took off. It seemed like there were many more boats operating than we remembered. 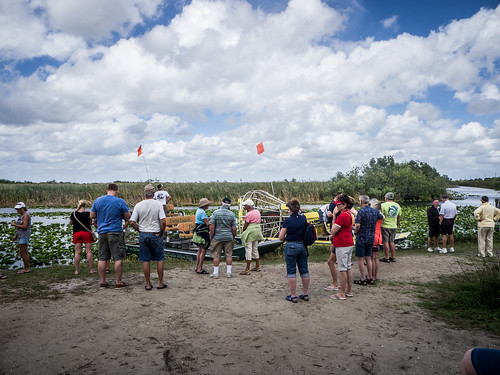 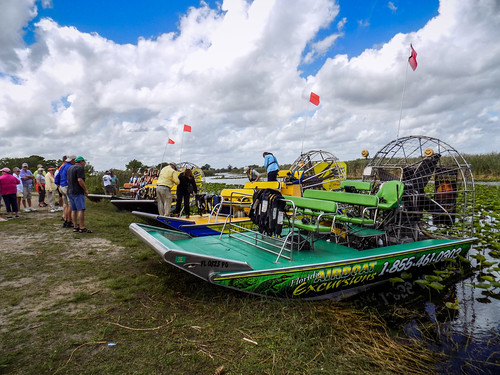 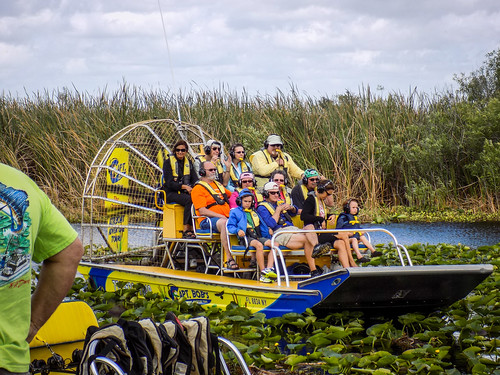 Soon we were met by our guide and boat pilot, Captain John. He spoke with us a bit and gave us some safety instructions. Amy, Laura and I were seated on the front row. 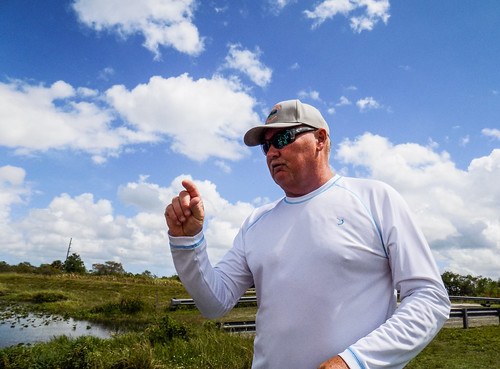 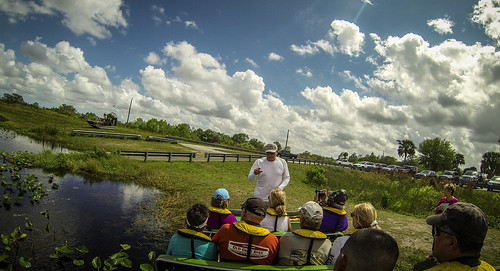 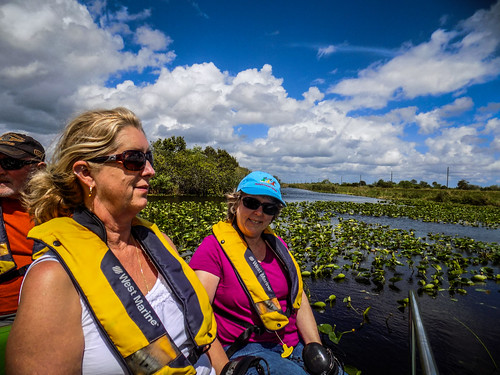 John had GoPro mounts all over his boat, and he let me mount mine on the fan cage. I opted NOT to use the one that points back at the passengers. 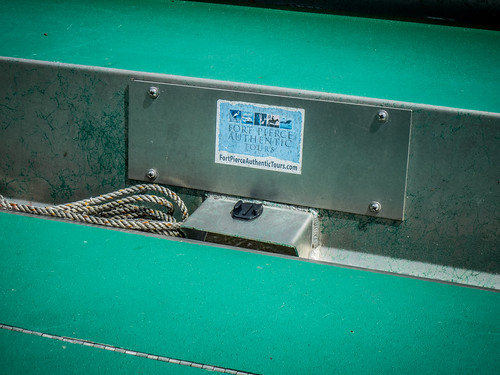 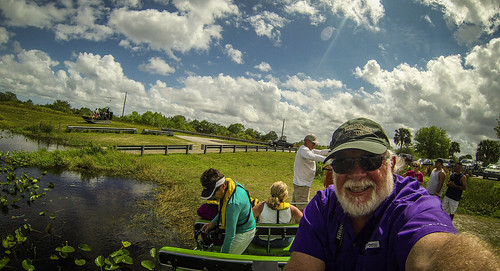 We got underway. Once we cleared the boat traffic at the landing, we picked up speed and started weaving a bit for some excitement. Soon, though were we spotting different birds – herons, osprey, and coots. 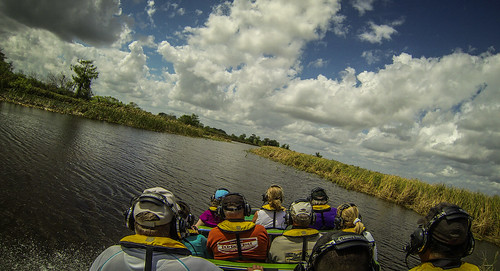 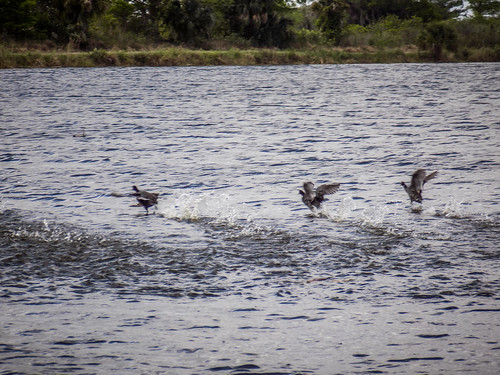 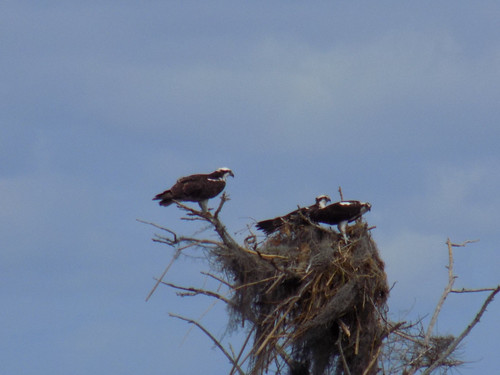 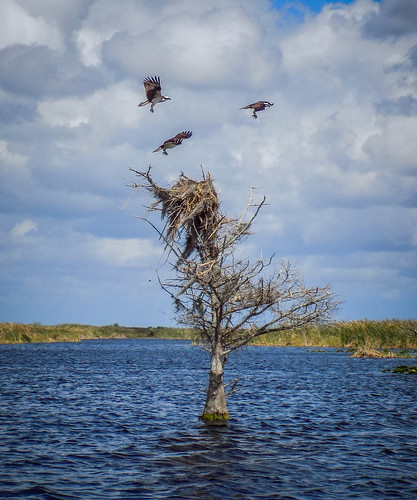 This being Florida, tourists want to see alligators. Since this was a general interest tour, Captain John tried to find us some. It was apparent that all the tour captains fill each other in on the location of gators and wildlife, so we drove right to them. 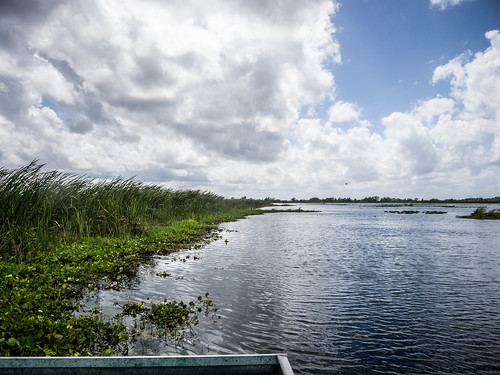 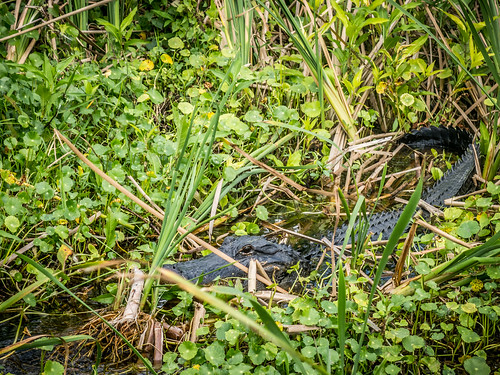 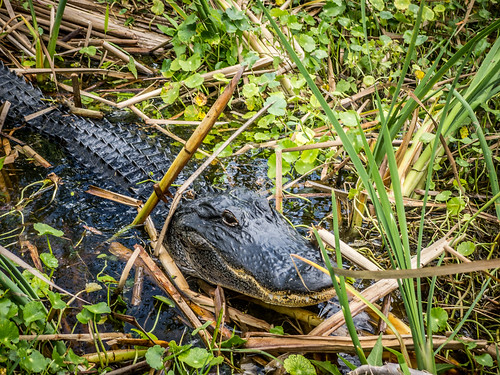 The alligators were hanging out on the small islands throughout the lake. There was a mix of large and smaller gators. We got quite close to them. 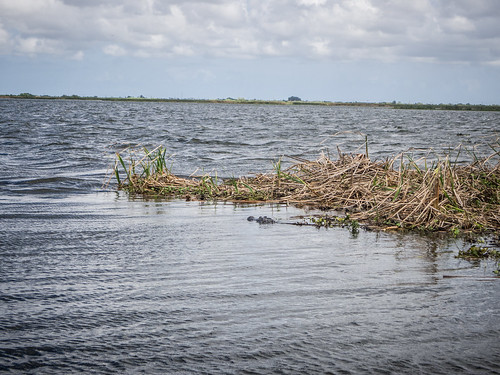 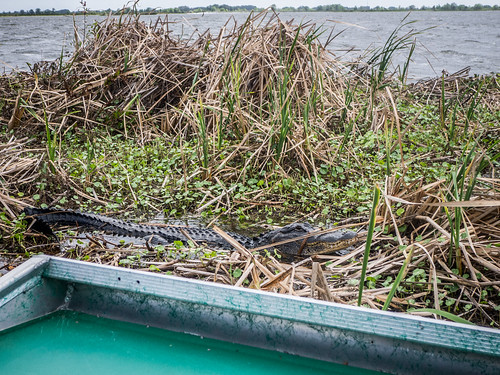 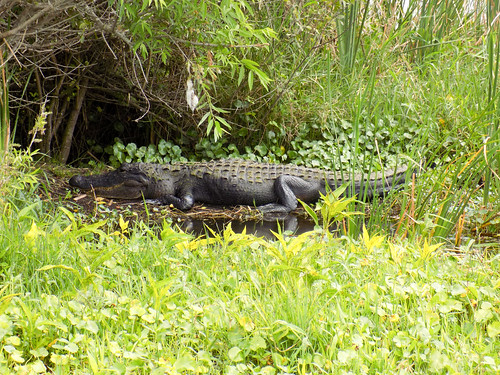 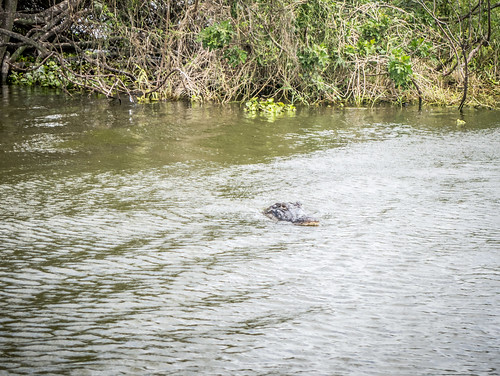 Captain John was an excellent guide. It was obvious he knew quite a bit about the lake, but since Florida seems to be all about alligators, that was his focus. He led us to two more spots where we could see baby alligators. 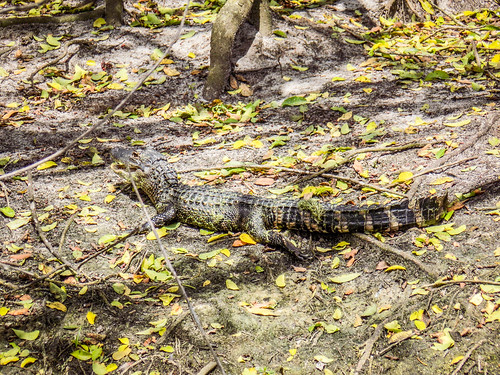 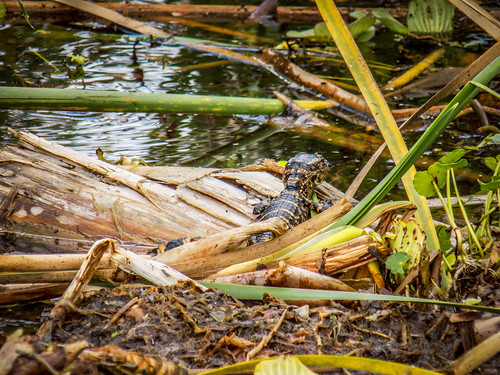 I was amazed at the capabilities of the airboat. In addition to being fast (and loud), it seemed to be able to go over just about any terrain, including limited dry ground. Water grasses and lily pads that normally stump my kayak were no problem for the airboat. It was windy out on the lake today, and it was subject to being blown about, though. 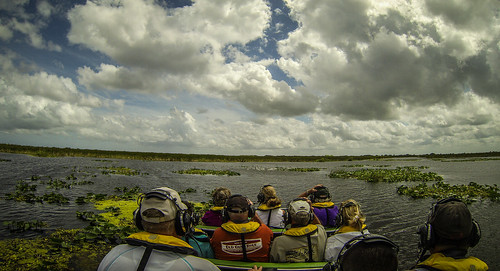 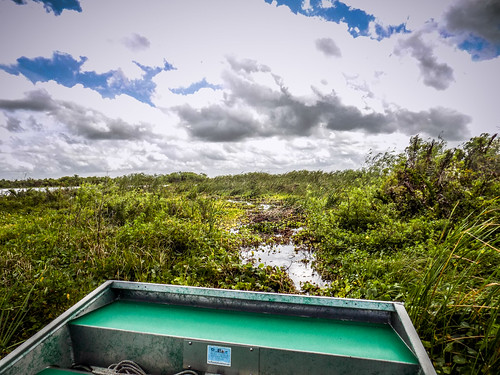 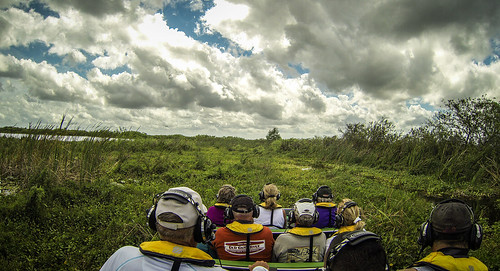 We wanted to see more wildlife other than gators. There were quite a few birds out. There were lots of cattle egrets, herons, and more osprey. Captain John took us by a nest that had a baby heron in it. 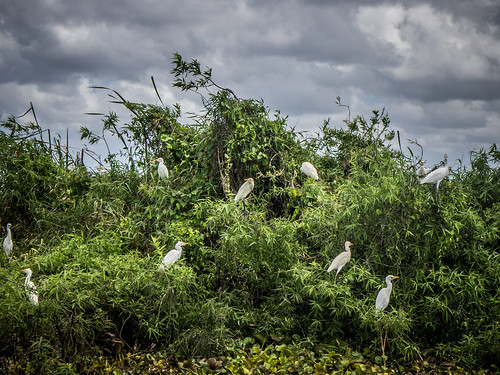 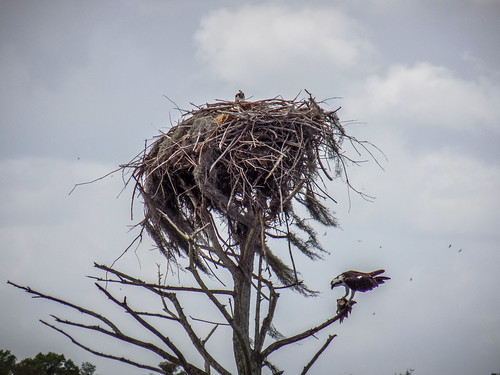 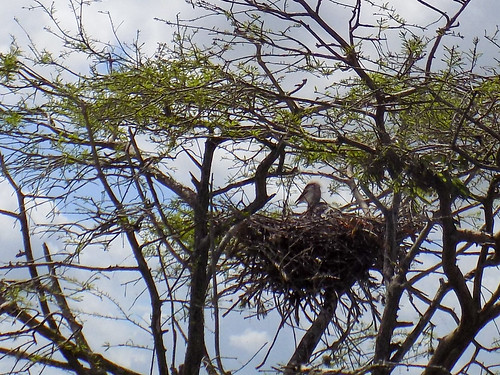 Soon, though we headed back. The tour lasted about an hour, and was quite enjoyable. I took the video from the GoPro and combined it with some of the still photos and uploaded that to YouTube. This video will give you a flavor of the tour.

We drove north through the wetlands and farm land toward Fellesmere. Captain John had said that it was possible to take an airboat from the Blue Cypress area all the way to Jacksonville. Looking at the wetlands surrounding us, I believe him.

We had one last surprise along the way. We were just west of Wabasso between I95 and US 1 when a spotted a familiar trio. At Allen Chapel AME Church there was a set of Coffindaffer Crosses in the church yard. I don’t know if they were official Coffindaffers, but they certainly looked like it. After-school traffic was bad, so I didn’t stop to take a photo, but I did find this image in Street View.

It was a great day air boating. I’m glad we decided to be tourists for a day. 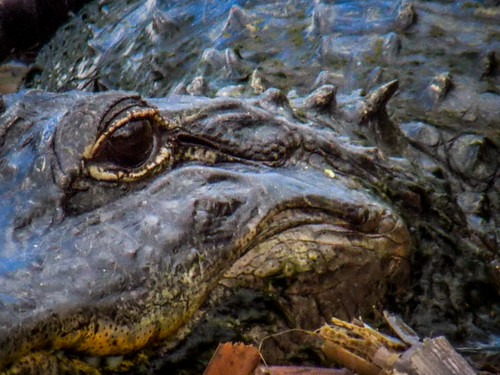 UPDATE: Laura was very concerned about the restroom conditions at Blue Cypress, so she e-mailed her concerns to the St. Johns River Water Management District. She got an immediate response. The district is also concerned. They stated that they do maintenance on the restrooms and porta-potties twice a week, but based on Laura’s report, would increase that to three times a week.

A supervisor called Laura back this morning with more information. He stated that ten years ago the area only go 10-20 visitors a day. With the increase in airboat tours the site now sees 3000+ visitors a day. My personal thoughts are that if the airboats aren’t doing so already, they need to be assessed a usage fee for the site. For the most part the captains seem to be environmentally aware, but the sheer impact of that many visitors can’t be good. The supervisor liked Laura’s assessment that the wilderness area is being loved to death.