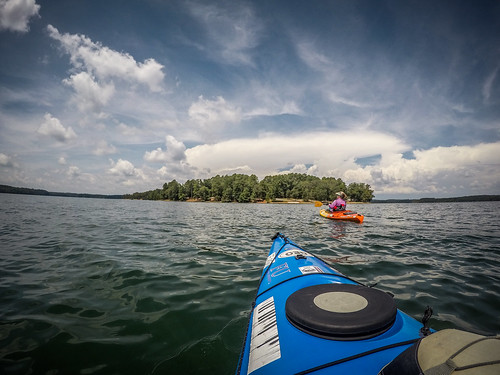 A few summers ago several of my friends and I started doing what we called “Water Wednesdays.” We would pick a different venue each week and try to get out on the water. Since then several of my paddling friends have retired and in this time of social distancing, it seemed like a good time to revive our tradition.

Kayaking is an excellent way to see friends while still keeping apart. You’re naturally apart on the water. The tricky bit is finding an appropriate venue. You can’t do a river with an A to B paddle that requires a shuttle because of close confines in a car. The venue needs to be close enough so that all parties can arrive separately without too much hassle.

Fortunately, Upstate South Carolina has loads of great venues that meet these requirements.

I’m always trying to update this map and welcome suggestions for new places to paddle that are within an hour or so from Greenville.

For our first Water Wednesday back we decided to head out to Ghost Island in Lake Hartwell. The island is so-named because it is the site of the Harris Family Cemetery and was part of their Harrisburg Plantation. I had visited the island once before and wrote an article on the history of the location for the Hartwell Lake News. The text of that article is below:

For this trip I would be joined by Alan Russell and Jeff and Lori Holland. I was the only one of the four that had made the trip out to the island. We met at the Coneross Boat Ramp near Townville, SC. From there it was just a short 1 mile paddle out to the island.

We made good time out to the island. When we arrived there was a pontoon boat at the beach where I wanted to land, so we picked a smaller beach that was actually closer to the old cemetery.

From here there were clear trails leading up to the cemetery. It looked well-tended and we didn’t spot any trash around the area, which is a good thing.

I had intended to check out some of the cross-island trails. However, it was hot. Plus, as we were exploring the cemetery we heard the pontoon depart and decided to move our boats over to the better beach.

Alan set up his hammock, Lori went swimming, and Jeff set out to explore. I had my metal detector with me so I started scanning with it. I found lots of beer cans and one tent stake. I decided I didn’t have the patience for this while I was with other people, so I joined Lori swimming. It was great, except for the fact that fish kept biting us.

We had our lunch, then decided to continue on around the island. The east side of the island also has a great beach and it looks like it’s been used for camping, too. Across the lake we could see another great beach, but this one was occupied with lots of pontoons and jet skis.

Instead of heading straight back to the landing we paddled across to Oconee Point Campground, where I had launched on my last trip. There were quite a few campers, but there were also lots of prime waterfront spaces still available.

We headed on back across the Coneross branch of the lake and back to our original launch. Mileage-wise it was a fairly short trip, only a little over four miles. Here is the time-lapse from the trip.

We did more hanging out than actual paddling, but it was still a great day for our Water Wednesday relaunch.