This morning I got a message from a friend considering a GoPro camera as a Christmas present. Since I’ve gotten that question several times, I decided to put together a blog post with what I’ve been telling folks who might be thinking about getting one, either for themselves or as a present.

I’ll state up front that I love my GoPro, but sometimes it’s a love-hate relationship. Even though I (and lots of other people) come up with different ways to use the camera, it’s a niche product, and you have to know its limitations. TL;DR version, I wouldn’t recommend it as your sole camera, but if you’re an active, creative photographer, you’ll find yourself using it in all sorts of ways you never imagined when you first got it.

Disclaimer – I have the Hero 3 Black. This is my second GoPro – my first is at the bottom of Bear Creek Lake in North Carolina. Since then GoPro has come out with the 3+ and the 4. There are several flavors of these, and I’ll go into this in a bit. My pros and cons are based on the unit that I own, and may have been corrected/mitigated in later models.

The first thing to bear in mind is that this thing EATS batteries. It probably has the crappiest battery life of any camera out there. When you add WiFi, Bluetooth, an LCD back (standard on the new version 4 Silver), or other option that just increases the battery load. When I’m on an extended kayaking trip I carry no less than six fully charged batteries, and I’m always stopping to change them. Understand, though, that I keep my camera running throughout a long day’s worth of paddling. With casual usage you won’t go through batteries as fast as I do, but I’d still recommend buying a couple of spares. Wasabi power has a great two-battery package that comes with a wall charger – another bonus that’s missing from the standard GoPro package.

Secondly, the camera is limited to wide range only. There is some fish-eye distortion, and no amount of Photoshop or Lightroom will clean it up completely. Just understand what type of shot you’re going to get and frame your shots accordingly, and everything will be fine. Objects that are close are subject to distortion. For example, here’s a throw-away shot of a building. Notice the curvature of the roof of the building. 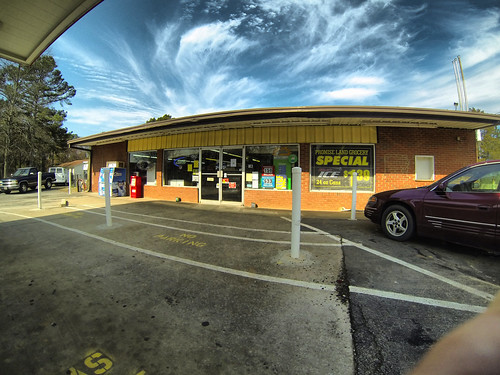 However, a landscape shot from the kayak looks fine. 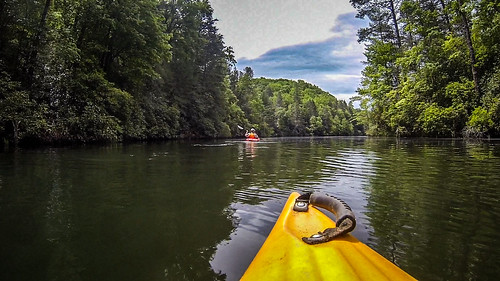 Sometimes that curvature can be OK. For example, this group selfie we shot in Palm Beach makes it look like you can see the curvature of the earth in the ocean. 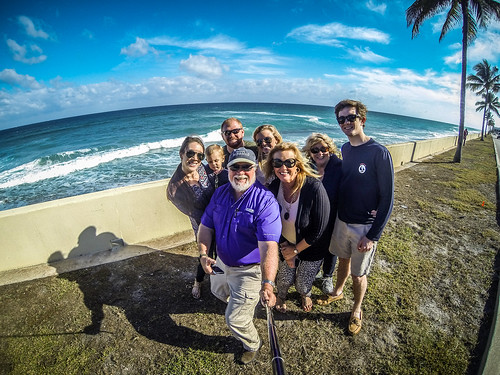 On the plus side, the camera takes gorgeous photos, and the video can be stunning. It’s smooth, and doesn’t seem to have the jerkiness of most hand-held video cameras. Some of my paddling video is so realistic as to almost make one seasick. Here’s an example from one of my trips on the Indian River.

For time-lapse applications, the camera is hard to beat. It’s simple to set up, and the results are excellent.

One of my favorite options with the Hero 3 Black is that you can record video and 12mp still images simultaneously. So, you get full video, plus the option of a time-lapse. The stills are high resolution, rather than just a screen capture.

The camera does have 4K video, which I have never really used. I do like the very high frames per second rates available at lower resolutions. You can get some very smooth slow-motion effects with the camera.

The camera has lots of options for remote control, from the GoPro remote, to controlling with an iPhone app. I’ve used both of them effectively. Just remember that these options will cost additional battery life.

Finally, the versatility of the camera is simply amazing, and this is due in no small part to the variety of mounting options. You could sink a TON of money on additional mounts, and you can mount this thing on just about anything. I’ll mention more on that in a bit.

As stated previously, I’ve got the Hero 3 Black. The Silver version didn’t come with WiFi, and didn’t allow for simultaneous video and still capture. The version I have does everything I need, so I have no great urge to upgrade to the 4. There was a HUGE jump in capabilities from the Hero 2 to the 3 version. Someone with more professional needs might want to consider the greater power of the 4, though.

That being said, probably by now the Hero 4 is all that’s available. The Hero 4 Silver is the same price as the old Hero 3 Black was, and seems to have many of the same specs. It even now comes with an LCD preview back, making it more like a standard small camera. I don’t know how that affects battery life. The Black version just has more and better of everything for $100 more, but it doesn’t appear to have the LCD back. Both units come with Bluetooth now, in addition to WiFi. For me, I’d probably go with the Hero 4 Silver at this point, and shut off the LCD to conserve battery power when not needed.

Quite simply, the more the better, and the more ways you’ll be able to use your camera. I’ve got the suction mount which I use lots of places. I have an extension pole. I have adhesive mounts on all my boats (although I’ve found they don’t hold as well on curved surfaces, even with the curved mount. It’s hard to get them to match, and if sea water gets under the adhesive, it can come loose.) I have a bicycle mount, and various stands. I’ve also got three cases for mine, including a bare-bones frame, a case with floatation, and one without. A tripod adapter is a must-have. 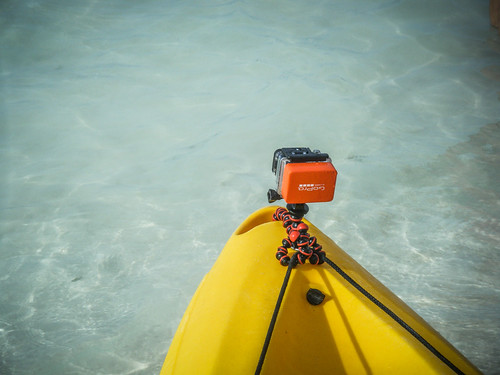 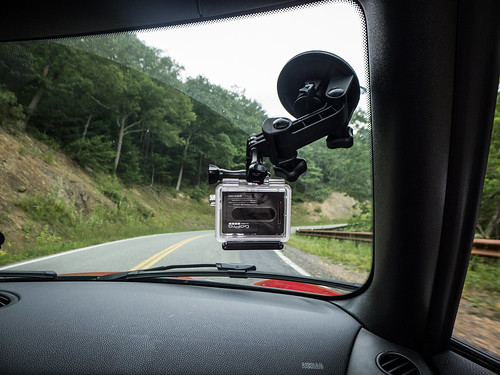 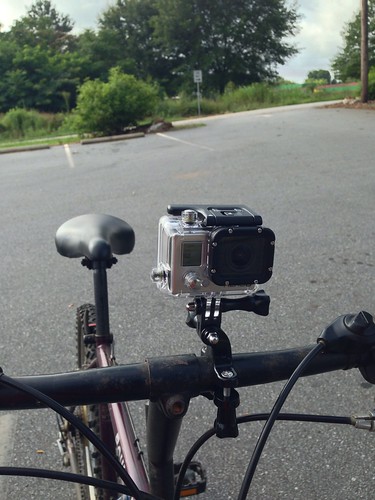 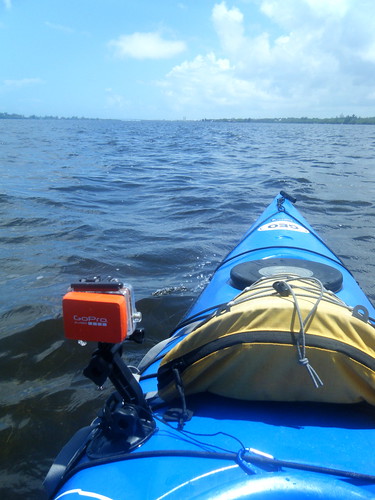 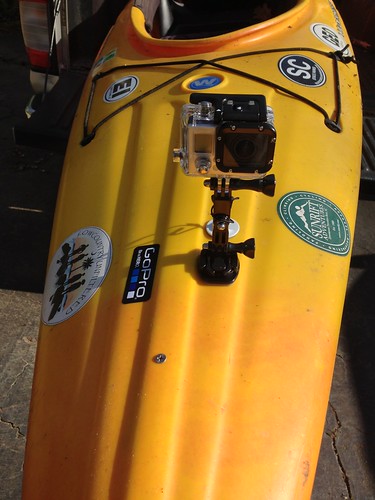 As to where to get the accessories, I DON’T recommend going to GoPro, Amazon, or any of the other retailers, unless you get a really good deal. These things are at a premium price. GoPro’s marketing is brilliant. They will sell you the camera, and make almost as much again in accessories.

The best pace to find mounts and other things for the GoPro is on eBay. A goose-neck extension that sells for $30 at retail only cost me $11, and I got a $25 float attachment for $6. Cases and critical components I’d still get from GoPro, but the mounts and adapters can be had for much less.

So How Do You Use It?

There’s the obvious – an action camera for kayaking cycling and other sports. I also use mine for time-lapse while mounted on a tripod. There are some not-so-obvious ways that I use the camera. I have it with me when I want to do a very wide angle shot. Since it’s light-weight, I use it on the extension pole to get interior shots through windows of historic churches, etc. 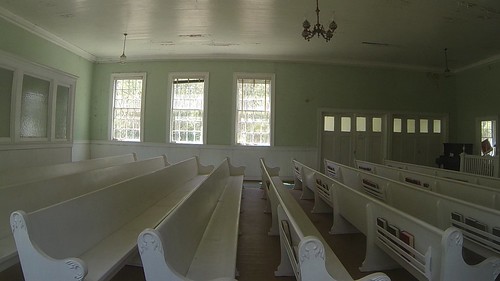 Since it’s such a small camera it’s unobtrusive, and I can get shots where a larger camera might be more intimidating. For example, I’m not sure I could have gotten this shot of this tattooed gentleman at the Pickens Flea Market if I’d pointed a larger camera in his face. 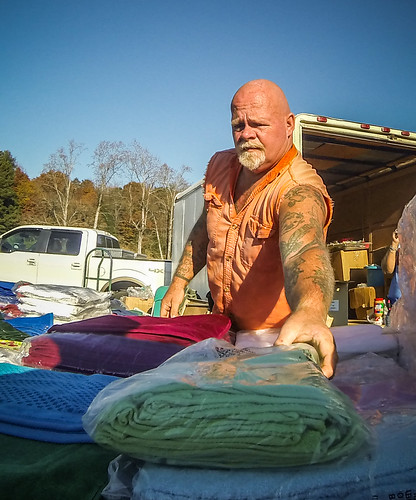 I find that I don’t do as much video with the camera as I’d like, and that’s a shame, because this is where the camera excels. Perhaps I need to just start walking around with the headband mount all the time.

In short, it’s a great camera, and I wish I’d invested in GoPro stock. You just have to be aware of its limitations, and know where it excels. It’s a great addition to a camera toolset, but shouldn’t be the only tool.

One last note – there are lots of competitors, such as Sony and Garmin, and quite a few knock-offs. The competitors put out some decent products, but I’ve never used them, so I can’t make recommendations. I will say to stay away from the knock-offs. The video quality just isn’t there.