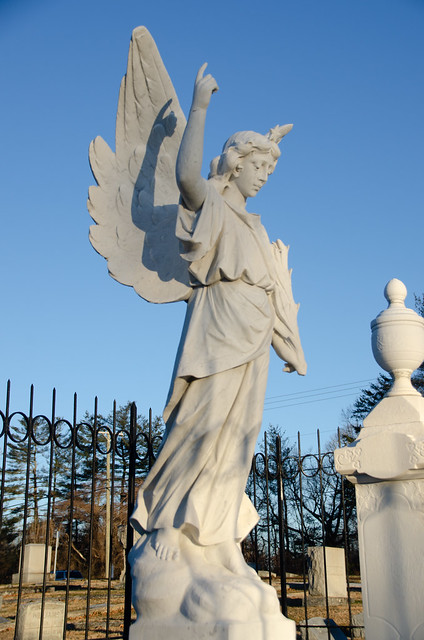 Ay me! Whilst thee the shores, and sounding Seas
Wash far away, where ere thy bones are hurled,
Whether beyond the stormy Hebrides,
Where thou perhaps under the whelming tide
Visit’st the bottom of the monstrous world;
Or whether thou to our moist vows deny’d,
Sleep’st by the fable of Bellerus old,
Where the great vision of the guarded Mount
Looks toward Namancos and Bayona’s hold;

I finally got around to reading Thomas Wolfe’s Look Homeward Angel. At this point I felt somewhat obligated, not from any literary guilt, but so that I could understand the role that this mythical being played in Wolfe’s world.

As a taphophile I was more interested in Thomas’s father, William Oliver Wolfe. I’d seen the purported “Look Homeward Angel” at the Oakdale Cemetery in Hendersonville and I’d visited the Wolfe family graves in Riverside Cemetery. I had even toured the Wolfe Memorial in Asheville and “The Old Kentucky Home” next door.

Yet these were bits of unrelated history with no context as far as I was concerned. It wasn’t until I finished slogging through Wolfe’s dense prose that I understood exactly how autobiographical the novel actually was. The protagonist, Eugene Gant, is the youngest of a large family, as was Tom Wolfe. Eugene’s father in the novel, W. O. Gant, sold monuments just like the real W. O. Wolfe. There were twins, Grover and Ben, just like Wolfe’s real life brothers, and “The Old Kentucky Home” boarding house becomes “Dixieland” in the novel. I can kind of see why Asheville was reluctant to accept Thomas Wolfe after the novel’s publication.

And, yes, it was a slog. I can’t say that I actually enjoyed reading it. Apart from the dense prose there were heavy racist allusions that jar modern sensibilities and other early twentieth century idioms that might not be understood as easily as back then. There were nuggets of gold, but overall I found it difficult getting through the incessant turmoil of a dysfunctional family.

Most importantly, though, I wanted to understand the use of angel imagery throughout the work. The title is a quote from a poem by John Milton mourning the death of “…a friend drowned in his passage from
Chester on the Irish Seas, 1637.” (Bartleby.com). The exhortation is for the Angel to look back towards home rather than the wilds of adventure. Scholars have said that Wolfe’s use of the title in this context is ironic, as he sought to escape the confines of his mountain home.

The word “angel” itself appears only 48 times, apart from the the title, which seems like a scant amount given the length of the book. However, even though there are few references, more than one angel appears in Wolfe’s novel. There are the physical manifestations of the angels from W. O. Gant’s monument shop and his obsession with them from an early age.

As the boy looked at the big angel with the carved stipe of lilystalk, a cold and nameless excitement possessed him. The long fingers of his big hands closed. He felt that he wanted, more than anything in the world, to carve delicately with a chisel. He wanted to wreak something dark and unspeakable in him into cold stone. He wanted to carve an angel’s head.

Oliver entered the shop and asked a big bearded man with a wooden mallet for a job. He became the stone cutter’s apprentice. He worked in that dusty yard five years. He became a stone cutter. When his apprenticeship was over he had become a man.

He never found it. He never learned to carve an angel’s head. The dove, the lamb, the smooth joined marble hands of death, and letters fair and fine–but not the angel.

The physical angels are often described in unflattering terms such as “fly-specked.” Wolfe likes to use the oxymoronic term “soft stone” while describing them, writing of a “soft stone smile” or “soft stone idiocy.”

The angel identified as the real monument in Oakdale Cemetery in Hendersonville only makes a very brief appearance. This one doesn’t get the flattering treatment, either. An old friend, Elizabeth, appears at Gant’s shop seeking a monument for a young woman in her care that had recently died…

“I want the angel out front.”

His face was shocked and unwilling. He gnawed the corner of his thin lip. No one knew how fond he was of the angel. Publicly he called it his White Elephant. He cursed it and said he had been a fool to order it. For six years it had stood on the porch, weathering, in all the wind and the rain. It was now brown and fly-specked. But it had come from Carrara in Italy, and it held a stone lily delicately in one hand. The other hand was lifted in benediction, it was poised clumsily upon the ball of one phthisic foot, and its stupid white face wore a smile of soft stone idiocy.

In his rages, Gant sometimes directed vast climaxes of abuse at the angel. “Fiend out of Hell!” he roared. “You have impoverished me, you have ruined me, you have cursed my declining years, and now you will crush me to death, fearful, awful, and unnatural monster that you are.”

But sometimes when he was drunk he fell weeping on his knees before it, called it Cynthia [Gant’s deceased first wife], and entreated its love, forgiveness, and blessing for its sinful but repentant boy. There was laughter from the Square.

“What’s the matter?” said Elizabeth. “Don’t you want to sell it?”

“It will cost you a good deal, Elizabeth,” he said evasively.

“I don’t care,” she answered, positively. “I’ve got the money. How much do you want?”

He was silent, thinking for a moment of the place where the angel stood. He knew he had nothing to cover or obliterate that place– it left a barren crater in his heart.

More prevalent in the novel, though, are the non-corporeal angels. These tend to be less guardian angel and more dark witnesses to life below. Ben Gant, in particular speaks directly to his angel, frequently uttering the phrase, “Oh, my God” in the angel’s direction.

“Oh, my God,” answered Ben, turning his lean, gray, bitter, bumpy face up toward his listening angel. “Listen to that, won’t you?”

OK, spoiler alert below if you haven’t read the book. However, as the book is now 90 years old I don’t think I’m really spoiling anything…

As Ben lies dying of pneumonia Eugene reaches out to Ben’s dark angel for help and comfort.

At the end of the novel the physical and non-corporeal meld. Eugene has a ghostly encounter with his dead brother.

Eugene saw his father’s name, faded, on the old brick in moonlight. On the stone porch of the shop, the angels held their marble posture. They seemed to have frozen, in the moonlight.

Leaning against the iron railing of the porch, above the sidewalk, a man stood smoking. Troubled and a little afraid, Eugene came over. Slowly, he mounted the long wooden steps, looking carefully at the man’s face. It was half-obscured in shadow…

In addition to his deceased brother, he sees in his father’s shop all of the stone angels coming to life, raising their hands and walking about.

With a strong rustle of marble and a cold sigh of weariness, the angel nearest Eugene moved her stone foot and lifted her arm to a higher balance. The slender lily stipe shook stiffly in her elegant cold fingers….

…Within Gant’s shop there was the ponderous tread of marble feet. Eugene leaped up and peered through the broad sheet of Jannadeau’s dirty window. Upon his desk the strewn vitals of a watch winked with a thousand tiny points of bluish light. And beyond the jeweller’s fenced space, where moonlight streamed into the ware- room through the tall side-window, the angels were walking to and fro like huge wound dolls of stone. The long cold pleats of their raiment rang with brittle clangor; their full decent breasts wagged in stony rhythms, and through the moonlight, with clashing wings the marble cherubim flew round and round. With cold ewe-bleatings the carved lambs grazed stiffly across the moon-drenched aisle. “

Reading that last passage I couldn’t help but wonder if Steven Moffat read this before scripting the Doctor Who episode “Blink” with its Weeping Angels.

“Remembering speechlessly we seek the great forgotten language, the lost lane-end into heaven, a stone, a leaf, an unfound door. Where? When? O lost, and by the wind grieved, ghost, come back again.”

So now I understood the fiction…somewhat. It was time to delve into the historical reality. There are real stone sculptures of angels from W. O. Wolfe’s shop scattered across North Carolina, angels I wanted to find.

Like the fictional W. O. Gant, W. O. Wolfe migrated from Pennsylvania to the mountains of North Carolina to set up his monument business. I was able to find advertisements for his business in Asheville in several area newspapers. These date from the 1880s through the early 1900s.

W. O. Wolfe had an impressive building at Court Place and Market Street as seen in this image from the Pack Library in Asheville. Sadly, I don’t see any angels in this image.

In 1924 W. O. and Julia sold the Wolfe Building. It was demolished to make room for the first skyscraper in Western North Carolina, the Jackson Building. It’s seen in this 2014 image by Flickr user Paul Malcolm.

At the other end of this block is a replica of Wolfe’s angel from the Hendersonville cemetery.

Julia’s “Old Kentucky Home” still stands and is now part of the Wolfe Memorial in Asheville.

Enough history and literary criticism. I was ready to find some angels. In Part 2 Alan Russell and I brave extreme cold and winds to locate other angels from W. O. Wolfe’s shop.