Today was our concert with the Greenville Chorale Chamber Ensemble. This is the small, 20-voice ensemble directed by Bing Vick. The concert, entitled Sacred Music for a Sacred Place, was held at St. George Greek Orthodox Cathedral in Greenville. For me, it was a bittersweet experience. 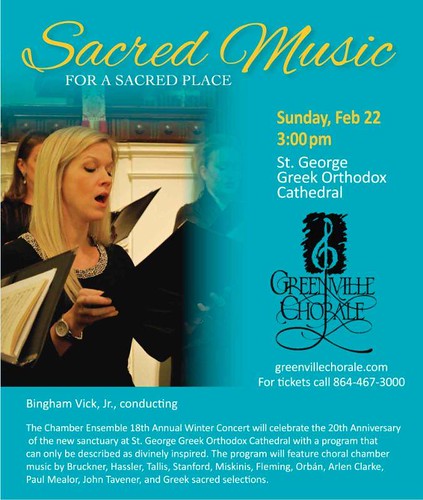 This morning I learned of the sudden death of Dr. Jeffry Jahn. Jeffry was celebrating his 25th year as artistic director and conductor of the Arizona Repertory Singers. Cause of death was an apparent heart attack. Jeffry was just a couple of years older than I am. 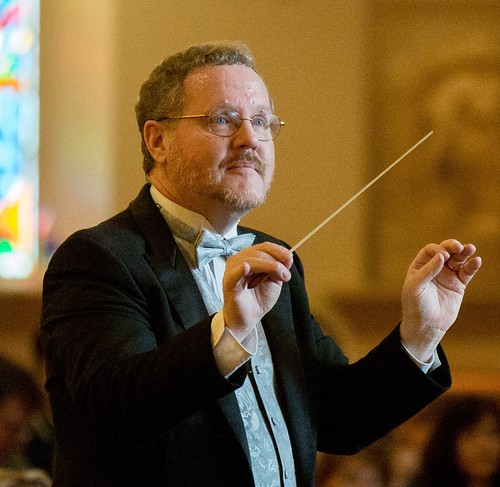 In 1991 Laura took a sabbatical from Furman to do research at the University of Arizona. I left my teaching job and tagged along. During that year I sang with the Arizona Repertory Singers under Jeffry’s direction, and it was one of the defining experiences of that year. So much so, that I’ve compared my singing experiences with all other groups since then to my experience with ARS, and have tried to recapture that time. That just can’t be done, though.

Let’s start with the group itself. I became close friends with many of my fellow singers, and frequently visited their houses for parties and dinners. A fellow baritone was a computer programmer at the Mount Wrightson Observatory, run by the Smithsonian. He and I hiked from the bottom of Madera Canyon to to the top of the peak so he could do some work at the site.

We held our rehearsals at the old Masonic Lodge, a mystical place with amazing resonance. Jeffry could be temperamental, just like any other conductor, but he had a knack for precision and expression, and he was a delight to work with. I don’t remember any prima donas in our our group, and we achieved a marvelous sound. After rehearsals we would go on a quest to find the best Margarita in Tucson.

Arizona Repertory Singers had received a grant to bring the arts to some of the remote communities around Tucson. We gave concerts in some VERY obscure places. I remember one was straight out of the old west, with honest-to-goodness cowboys with six shooters strolling down the street. Our Christmas concert that year was held at San Xavier del Bac, a large Spanish mission south of Tucson.

Connecting that experience to our concert today…

One piece on our concert was Charles Stanford’s “Beati quorum via.” That piece was a signature piece for ARS. We sang it at almost all of our concerts, and it was on ARS’s repertoire when Laura and I returned for a visit several years later. As the Chorale Chamber Ensemble sang it this afternoon, I kept thinking about Jeffry, and I personally was hoping that we were doing the piece justice, in his memory.

The rest of our concert this afternoon went very well. The Greek Orthodox Cathedral was absolutely packed. I’m not sure there were any available seats, and we even had folks sitting up in the choir loft, from which we would be singing in the second half of the concert. 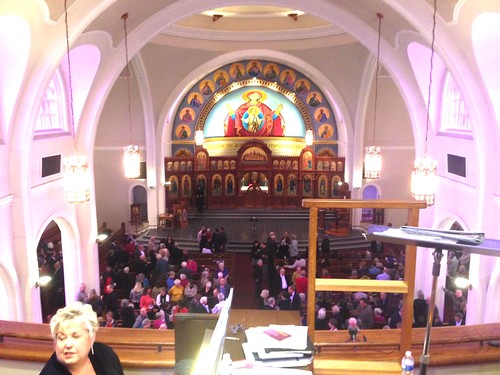 We did a mix of sacred music in different styles. Laura’s favorite was “Sing and Ponder”, but mine was a piece entitled “Daemon.” In the second half we sang part of the Greek liturgy from the balcony. I told our conductor, Bing Vick, that it must be like singing “Blessed Assurance” in a Baptist church – we had to get it right. We finished with a set of spirituals back down front.

The concert was well-received, and we got a standing ovation. Members of the congregation came up to us and said that we got the enunciation of the Greek texts correct. It was a good concert, and singing those pieces helped me remember one of my favorite conductors.