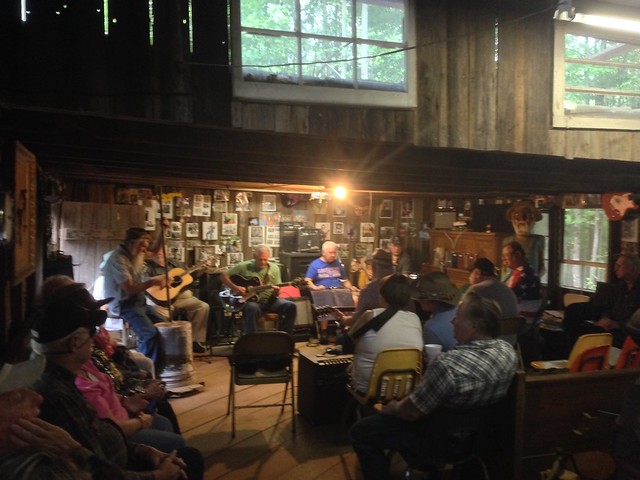 Monday night Stephen and I decided to head back to Perryville. Stephen would be in the midst of moving mid-state in a couple of weeks, and I would be picking back up with summer Chorale rehearsals, so this would be the last opportunity for awhile.

We agreed to meet up at Robert Perry’s place. As I drove up there, I wondered if Robert lived in any area with blue ghost fireflies. I’d have to check. As I turned in, at least two cars pulled into the drive in front of me. I wouldn’t be the only one here.

Somewhat reluctantly I’d brought my banjo. I also had my standard documentary equipment – multiple cameras and audio recorders. However, I couldn’t really use both. As I’ve said before, you can either participate, or you can document. If you try to do both, it lessens the experience from either standpoint. I thought it best to check out the lay of the land before deciding which role I would play tonight.

There were more people and more musicians than when we visited a couple of weeks ago. There were at least a dozen players in the circle, including a blind bass player, several guitars, three mandolins (two of whom doubled on fiddle), a harmonica player, Robert on washboard bass, and a couple of percussion players (spoons, tambourines, etc.) There was one banjo player – a different guy from the last time. I decided that with that many people I could sink into a corner and strum along. I went back for my banjo and took a seat away from the woman playing mandolin who had scowled at me last time. 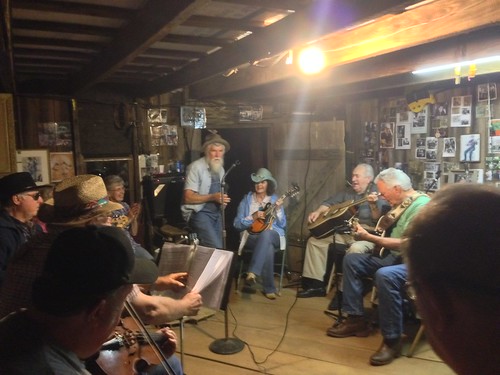 From here on out I took no more photos. I just played. And I had a blast. I had learned one more chord on the banjo, and as it turns out that’s all I needed to keep up with almost everything they played. I could play in G or C, now that I had the F chord under control, and with a capo I could play A or D. That seemed to be the gamut of the country and gospel songs they selected.

Robert would move the microphone around the circle for each player to select a song. Once again I declined, preferring just to play along. Several from the audience also came up and sang some songs. The usual instructions were to play the first chord, which would set the key. “Gimme a chord of G!” Since the banjo is tuned to an open G I liked it when I heard that, but this time I could hang with them in other keys, except for when one singer specified Bb. NO ONE liked that.

The other banjo player was very good, and quite friendly. We chatted for a bit, and he gave me a few pointers. Instead of just strumming or clawhammer, I pulled out the finger picks and plucked along with some of the songs. The slower country songs were great for practice. The banjo player selected Foggy Mountain Breakdown for one of his pieces, and I was even able to jam along with that, mostly just playing the chords (FYI, there are only two – G and E minor.)

Stephen came in a bit after I did, and after I was already playing. He had gotten a Panasonic Lumix camera like mine and Houston’s, and was wandering around taking photos with it. I was glad he was going to tonight’s documentarian, because I had nary a camera with me except for my iPhone.

The break came and Stephen and I were able to catch up for a bit. Were were hoping the wives would be able to join us, but both Cynthia and Laura had conflicts. Laura has said she would really like to visit Perryville.

Break over, I headed back in. Stephen took a spot closer to me this time, but couldn’t stay much longer. I kept playing. I probably would have played as long as they had if I hadn’t given Laura an approximate time I’d be back home. Regardless, it was a blast, and even more enjoyable that the last time. It’s amazing what one additional chord and a capo can do. 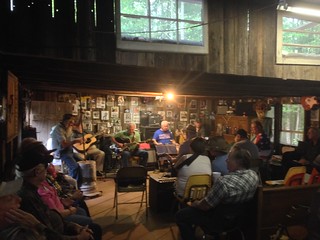 3 thoughts on “Return to Perryville”