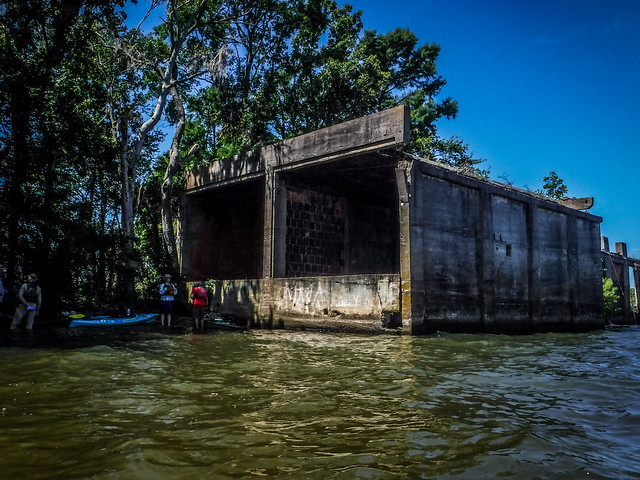 The ghost town of Ferguson has been on my mind quite a lot lately.  I’ve written a couple of articles about it and my blog posts about the town continue to be the most popular.  I’m involved with a project dealing with Lake Marion and Ferguson that I’m not at liberty to discuss online, but that has made me want to head back out and see the ruins.  This past Saturday I had the opportunity to do just that with some of my Lowcountry Unfiltered friends.

Paddling friends Tim Brown and George Hancock had visited Ferguson recently and posted some photos.  It looked like more of the old structures had collapsed.  The Tri-County Blueway Paddlers were making a trip on Sunday, but I couldn’t join them because of church obligations.  When Matt suggested the venue for our Second Saturday trip I jumped at the chance.

This trip would also give me a chance to test out my new kayak rack for my truck.  Laura drove the Outback to Washington and I didn’t think my 18 foot Tsunami would fit in the Mini convertible.  It sticks too far out of my truck, so I needed something to lift the boat above the cab.  The solution was to build something that fit within the bed from 2X4s.   I put it together with bolts that could be removed and stored flat when not in use.  I had actually already used the rack twice, once with my canoe on Lake Marion on July 4, and last Saturday on the Edisto trip.  This was the first time I’d be using it with the long boat.  Jim Leavell would be riding down with me, so I’d have his boat loaded as well.

Jim Leavell and I headed down early Saturday morning, joining Alan Russell at our favorite breakfast spot, Bill & Fran’s in Newberry. From there we caravanned down to the put in at Ferguson Landing in Eutaw Springs on Lake Marion. Matt Richardson and his friend Chris joined us from Bluffton.

It’s strange how a single incident can take on a life of its own. Our original visit to Ferguson was in 2013. The write-up of that trip went viral and is the most visited post of this website. It’s brought an unusual amount of attention to myself and even opened a few doors. A couple of years ago I was able to return to Church Island but this was the first time I’d been back since that initial trip.

Since that first trip I’ve done lots more research on the ghost town of Ferguson, including locations specific to the town such as the mill location and locations of the residences. This time I had these marked in my GPS as we set out. I also had several other interesting points marked for exploration.

The bulk of the remaining ruins are located on Ferguson Island, which is just a short paddle from Ferguson Landing and Taylor Campground. I was surprised at just how close the ruins are. A row of cypress trees blocks the view, otherwise, they would be visible from the landing.

We had a quick, albeit bumpy paddle out to the ruins. A brisk wind had whipped up a few white caps, but we managed it without problems. It meant that paddling around the ruins themselves was trickier than usual.

We found a spot on the north side of the island and pulled up to explore. It looked like more of the old lumber kiln had collapsed in the six years since we last visited. Here is a view of the kiln from 2013…

…and here is the view as I approached on this trip…

Some of the outer walls and more of the roof has collapsed.

Also on our last visit the water was much lower. More of the ruins of the town were visible. With the rough higher water we had difficulty landing on the north side of the island, but we managed. We got out to explore the kiln and enjoy a toast to the history of the area.

From the kiln we continued along the north side of the island passing ruins we had not seen on the previous trip.

One ruin that caught our attention was an overgrown round brick structure. It had some arched windows. and interior chambers. We had no clue as to its purpose.

We circled the eastern end of the island through the thick cypress, then headed back along the southern end. The remains of brick structures line the banks of the island. We didn’t get out to explore further, though.

I’d marked the location of the railroad spur and the main processing mill. When we reached that location any remains were submerged. This is a view of the Ferguson mill when it was in operation.

Looking at my maps I believe this structure would have been just off of the southwest corner of the island. However, the historic photo makes it look like it sits up high, as if it should be on an island itself.

I also had marked the location of the main residential structures. On this trip all you could see was open water.

The day’s weather forecast kept changing. Tropical Storm Barry was churning in the Gulf and the early call was for 80% chance of rain today. By the time the actual trip rolled around that was down to 40%. So far we had clear, beautiful skies. Even so, we decided to stick fairly close to the landing and make this an out-and-back trip. To that end, I’d marked what looked like a lovely beach for our bratwurst and sauerkraut feast. We set off in that direction.

It seems that lots of others had the same idea. There were already five pontoon boats either pulled up to the beach or anchored nearby. One family had a large tent set up. There was still plenty of space for a few kayaks, though, and we found a great spot with a bit of shade.

The water was perfect for wading. We relaxed for awhile…

…then Matt worked his magic with The Most Photographed Coleman Stove in the Southeast™.

Things were going well until some dufous in a pontoon boat pulled up and started blaring a stereo as loud as possible. It was time to leave.

The area behind the beach consists of several ponds, some of which are accessible from the lake. This area is an SC Wildlife Management Area. We decided to see if we could get back into several of those waterways. I had a couple of entrances marked on the GPS, so after lunch we paddled in that direction.

The channel led to a large bay with water lilies and other aquatic vegetation. There were no boats in this area and it was peaceful…except that the blasted noise from the stereo could still be heard everywhere we went.

We paddled back as far as we could, then made our way back out to the main part of the lake.

The nice sunny skies that had blessed us all morning started to turn dark. I checked the weather map and saw that there were storms all around us, but we seemed to be OK for the time being.

We decided to venture just a bit further. We rounded another bend and found another nice sandy beach upon which to hang out for a few minutes. This one seems more sheltered and less likely to be invaded by pontoon boats. We’ll have to remember this one the next time we head down this way.

By this time the skies really were starting to turn dark on the other side of the lake. We decided it was time to head back. We paddled back past the beach and its party, still in full swing despite the weather.

We made it back and got our boats loaded with no problem and long before any storms hit. Later we learned that others were not as lucky. A pontoon boat trying to beat the storm capsized. One person and two dogs drowned, five others were rescued. Very tragic.

We had completed two of Bs, and now it was time for the third. That meant a trek to Sweatman’s BBQ on the other side of Eutawville.

One of my dieting coaches said, “Your feet can’t outrun your stomach!” Neither can you out-paddle it. I always tend to weigh more after these trips, but the occasional indulgence is worth it, to me.

After our feast we said our goodbyes and parted ways until the next Second Saturday. It was great to revisit Ferguson, and we had a good day out on the water. In all we paddled about seven miles.

I did have the GoPro going for a time-lapse. I haven’t had a chance to fix a mount onto my big red kayak, so I used a VERY tall gooseneck that tended to be rather unstable.

Some of the images came out weird, but, regardless, here is the time-lapse from the trip…

And, finally, here is a link to the photo album on Flickr…