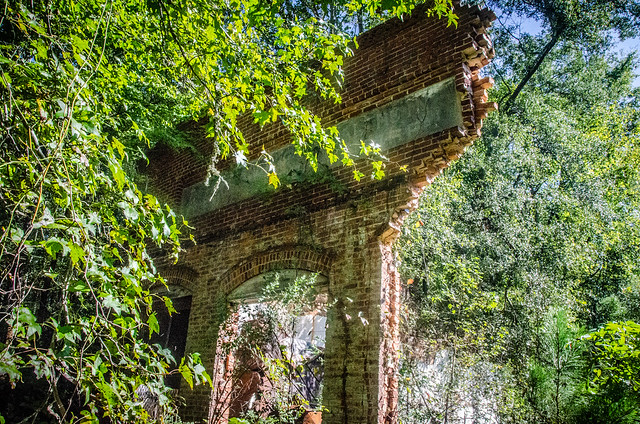 When you’ve lived in an area as long as I have you can’t help but find yourself exploring places that you’ve been previously.  Expect the term “Revisited” to start popping up more frequently in blog post titles.  This was the case for a recent photo trek with fellow explorer Mark Elbrecht as we wandered over lower Laurens County.  We both wanted to see what was left, if anything, of the old ghost town of Renno.

This particular adventure started with a discussion about a photo Mark posted.  The photo showed the remains of the old Bell’s Store in Renno.  We both wondered if even these few bricks remained, or if it were all gone.  We decided that we needed to head down and check it out.  We would also head down to Stomp Springs and a couple of other places along the way.

First, a recap of the town’s history…

Renno was first known as Reynosa.  A large farm in the area still bears that name.  It was once an active railroad stop with several stores, a cotton gin, and even a movie theater.  During the Great Depression the businesses closed and many residents moved to the larger communities of Clinton or Laurens to seek work.  The town disappeared and the community returned to its agricultural roots.

Mark and I set out on a Wednesday morning heading down toward Laurens.  At the Old Laurens Road exit I suggested leaving the interstate.  I had an ulterior motive.  This would be my first visit to the Gray Court area since we sold our home place nearly two years ago.

Quite frankly, it was depressing.  The town of Owings once had murals painted on the sides of the buildings and it looked like there was interest in restoring the historic buildings.  Now they seemed to be deteriorating.  The old Bryson and Stoddard Store was in the worst shape I’d seen.

Things weren’t any better in Gray Court itself.  Our old home was overgrown and a gutter was hanging awkwardly from the eaves.  The houses across the street seemed to be falling in.  A yard a bit closer into town had a large tree down, and it looked like it had been there awhile.  The town itself was almost completely dried up.

We drove past the old Gray Court Settlement which used to be a display for historic buildings.  The place was overgrown and now there were gates with “No Trespassing” signs.

One of the local business owners had told us that the town was overrun with drugs and prostitution and that he had witnessed transactions from his store’s front window.  The mayor turned a blind eye as his son (with whom I attended school) ran the illicit dealings.  That business owner also closed shop and left town.  Quite frankly, I’m glad we got rid of the place when we did.

We cut across the country down Highway 92 and over to the town of Ora.  The danger here was “mission creep”, as Mark called it.  It would be very easy to get distracted and we would never make it to our target area.  We were disciplined, and apart from our detour through Gray Court, we stuck to our agenda.

Eventually we reached the old Tip Top Store on the Whitmire Highway.  I’m not sure when the current structure was built, but it has the features of a “transitional auto-centric store.”  This is a two-story structure with an overhang where cars could pull in to get gas, although it looks like they would not have actually been able to pull under the overhang.  The upper floors served as a residence or storage while the public spaces were down below.

Vegetation seemed to be taking over the building. Heavy vines now wrapped around the front support columns in such a way that they almost looked like trees themselves.

I wish I could find more info on the store.  I’m sure it’s available from one of the local historical societies.  I don’t know when the store opened or closed, but I have vague memories of stopping by here for a snack with my father when I was a child.  Early editions of the Laurens Advertiser indicate that this was a local meeting and polling place as early as 1917.

We continued on around to the town of Renno.  First up was the old school.  There is absolutely nothing left there now.  If you didn’t know where to look you would miss it completely.  Where the foundations once stood there is now just a group of bushes.

This is what the school looked like in its heyday in this photo from the South Carolina School Insurance archives:

Back in 2008 there were some walls left:

And in 2011 at least you could still see the foundations.

I was able to find a photo on Flickr from user Gene Brooks that showed a classroom from the school. I don’t know when the photo was taken. I can see from the board that it was October, but I don’t know the year. I guess you could figure it out from which date falls on which day of the week.

Our next stop was the only other remnant of the town, Bell’s Store. Back in 2008 this is is what I found:

When I visited in 2011 there was only a part of the facade and one wall. We were pleasantly surprised to see that it hadn’t deteriorated further. It was still in pretty bad shape, though, and was much more overgrown.

We took a quick turn through the community. Across the tracks is the Reynosa Farm. Some of the farm houses had been renovated and looked lovely. Others hadn’t fared so well. One building set back off of the main road puzzled me. It looked like it could have been an old church, but it also could have been a house.

Across from Bell’s Store I spotted an old dirt road leading into the woods. I was tempted to follow it, but it probably just led across someone’s farm.

From Renno we continued down the Whitmire Highway until we got to the turn off for Stomp Springs. This area always depresses me. The loop around the springs was once covered in junk. It had been cleaned up quite a bit, but it was still spooky. There had been a meth lab on this loop. At the actual springs there were so many “No Trespassing” signs that we just kept going. These looked like the types of folk who would shoot first and ask questions later. We took no photos.

Back out on Highway 72 we stopped by the Sardis Church Cemetery. I had visited this once before, but Mark had not.

Someone had visited recently and had used pink chalk to enhance the writing on some of the headstones. Generally I don’t approve of any “enhancement” to bring out the images because you don’t know what chemicals will react with and degrade the stone. My preference is to use photographic enhancement as much as I can.

I found a couple of signature stones that I didn’t spot the last time I was here. One was a “G. Geddes” from Laurens, but the other was illegible.

We took a few more photos, but it was starting to get hot out there.

It was lunch time so we headed on toward the town of Whitmire to see if we could find a bite to eat.  It was Mark’s first visit to the town.  We made one stop so that he could photograph the old Carver School, an “Equalization” school from the 1950s.

From there we headed on downtown.  We made one pass through the town, then headed back to find a parking spot.  It looked like there was only one place open for lunch, the Whitmire Cafe.  We decided to give it a shot.  First, though, we made note of some old ghost signs and some interesting advertising embedded in the sidewalk.

There were several locals sitting outside of the cafe.  Mark tried to act nonchalant, in case there was trouble.

The cafe was a meat and three.  I got fried chicken, mashed potatoes, and fried okra, my first since returning home.

As we looked around I spotted a familiar sign on the wall:

Back in 2009 I had stopped at the Whitmire Truck Stop before joining friends for a kayaking trip on the Enoree River.  This sign was on the outside of that building, the truck stop now long closed.

I mentioned the sign to our waitress and she said that her grandmother, who passed away in 2014, had run the truck stop.  Looking back at my entry for that previous trip, one commenter said that she had two aunts, I assume sisters – one ran the Whitmire Truck Stop and the other ran the Whitmire Cafe.

Hey! That is my aunts truck stop! Glad to hear you enjoyed your stop. I have another aunt that has a cafe on main St. You should try it out also. Thanks for stopping by!

The food was good and filling.  We headed out and took a few shots of the town.

Even though there wasn’t much open in Whitmire this morning, it looked MUCH better than Gray Court.

Across the street from the cafe was a sign for the South Carolina Bottle and Whitmire Museum.  Sadly, it was closed, but we peeked through windows to see row after row of bottles.  At the end of one of the rows was a display rack for Shivar Springs Mineral Water.

From downtown we made one more stop so that Mark could take a photo of the old Whitmire High School.

We also headed north on 72/178 so that Mark could see the old Whitmire Truck Stop.

Since we were down this far I decided there was one more spot I wanted to check.  Jews Harp Spring is about 6 miles from Whitmire on the Maybinton Road in Sumter National Forest.  A short trail leads down to the spring.  I’d visited once before, but decided that it would be another good place to revisit.

We found a place to park along the road and hiked down to the spring, which was surrounded by a stone wall and topped with a wooden fence.

The spring is so named because the circular basin and drainage trench look like a Jews Harp.

The spring was a water source for Orange Hall Plantation, located nearby.  Mark was able to find a land grant map showing the original location of the plantation.  The spring itself was improved in the 1860s by J. E. Sherman.

The last time I was here I was looking or a geocache and I got frustrated that I couldn’t find it.  This time I decided to give it another shot.  My app indicated that it was nearby, on the other side of the creek.  The impact trail from a recent find led me straight to it.

As we hiked back to the car I saw that there was another geocache near the entrance.  Impact trails helped a bit, but this one was a little harder to find.

We had a good day out and about, but the clouds were starting to build and it was time to head back to Greenville.  For the most part we stuck to our original mission, but still had some time to explore other targets.  All of my photos from the trip can be found at this link.  Mark posted his description of the trip on his blog and his photos can also be found in a Flickr album.