I get really, REALLY mad when people steal my work. I just now came across another example on Facebook. Apparently someone visited my post about the cursed Robintation Tree, downloaded the images, then posted them to a Ghost Towns discussion group as her own. However, not only did she steal my photographs, but she copied a portion of my post word-for-word and posted it as her own, including a parenthetical aside. Here’s a screen capture: 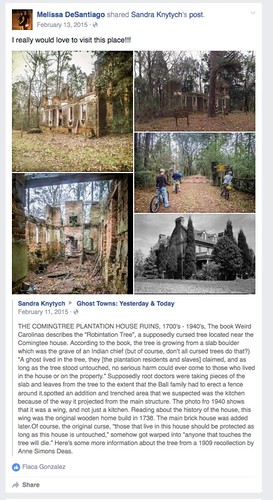 This isn’t simply “sharing”. The user goes on to claim these as her own in subsequent comments. Next to another of my photos is this passage:

…the wife and husband died,sons didn’t want it cause it was haunted, the full story is in my original posting with other photos…Warning signs are post everywhere not to enter…

She also makes comments about “her original research” in other comments. Even though the post was from February of 2015, this content theft was so blatant that I felt it couldn’t go unchallenged. I have left comments on the original posts, and have tried to contact both the user and the administrator of the group. No response.

UPDATE: The post has now been removed. Here’s that screen capture: 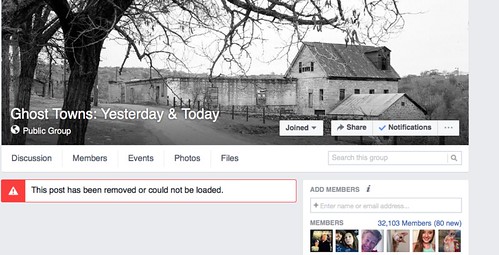 Let’s make this simple: Just because something is posted online doesn’t mean that it’s free for the taking. Copyright laws apply. I retain the original images and EXIF data so that I can prove photo theft when it occurs. I also retain copyright to all my images and content, unless otherwise stated.

Don’t tell me stuff like, “Well, you shouldn’t post it if you don’t want it stolen.” You could apply the idea “If you didn’t want X you shouldn’t have done Y” to just about any crime. That doesn’t excuse someone from breaking the law, but simply shifts the blame to the victim of the crime.

So, sadly, I have placed this site on lockdown. While you’ll always be able to read and access the content on this site, I have disabled the ability to right-click and copy anything, including images and text. Yeah, yeah…I should have done it sooner, so I’m stuck with something that’s like locking the barn door after the horse is out. Also, it won’t prevent someone from doing a screen capture, but it might discourage others. You can still click the images for a larger view on the original Flickr page, which is also protected from download.

I put this stuff out there because I WANT people to read it. If you would like to reuse anything you see here, please ASK! Usually I’m pretty cool when folks share my work, and I have approved all kinds of use of my photographs, as long as proper attribution is given.

PS: If you’re wondering how I discovered this, I track activity on this site. When I spot that a post is getting more traffic than usual, I like to find out why. While this Facebook user didn’t post a link back to my site, I’m guessing that others were using Google to find out more, and were coming across my original post. The Google search terms statistics support this theory. I’m just surprised that no one had called her out on this earlier.

2 thoughts on “RandomConnections on Lockdown”