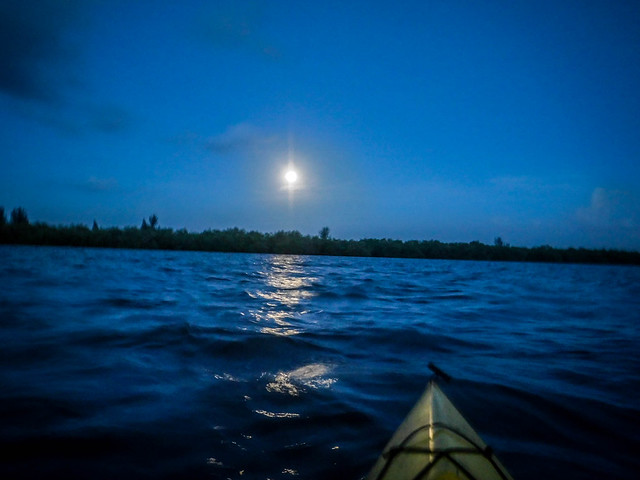 We just got back last night from a quick trip down to Florida. Laura had a four-day weekend because it’s Fall Break at Furman, so we took the opportunity to head down and assist her sister Amy with their mom. It was also a birthday weekend for both sisters, so we tried to work in a joint celebration.

We had been worried about damage from Hurricane Matthew. We saw trees down as we traveled down I-95, but the roads were cleared. Down in Florida there were trees and limbs down, but they had been spared the wrath of the storm. Amy had been without power for a couple of days, but now things were pretty much back to normal.

Amy’s birthday was Friday, and Laura’s was Saturday. We made it down late Friday evening, and were able to spend some time celebrating. Mrs. Wright has been doing physical therapy at a rehab center, so we spent a good part of the day over there with her. I had brought my banjo, and she seems to respond well to that. After she went to bed (fairly early) we went out for a nice meal.

However, this was really a work weekend. Our job this weekend was to get Mrs. Wright’s place ready at the memory care facility where she would be moving. It wasn’t a particularly pleasant job, but one that needed to be done. We spent a good bit of time shopping for things she would need, then rented a van and loaded up her bed and other furniture. We were able to accomplish everything we had planned to do, and her room will look homey and ready for her when it comes time to move.

I was able to get one paddling trip in. I set out very early Sunday morning – 5:30, to be exact. It was very windy and the water was bouncing, but I set out anyway. The full Hunter’s Moon was starting to set in the west, and casting reflections on the rippling water. 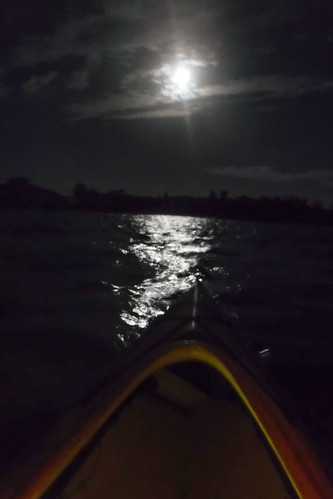 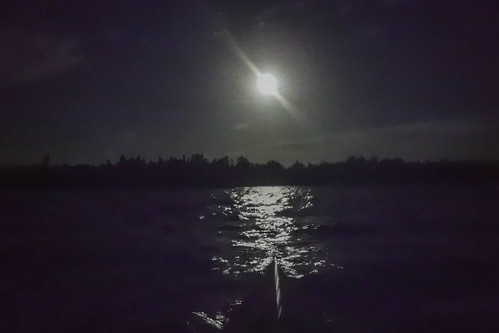 I was getting tossed around like a cork in 2-3 foot waves. I only had my small waterproof camera with me, and had to make the best of it. Most of the shots turned out blurry in the low light. 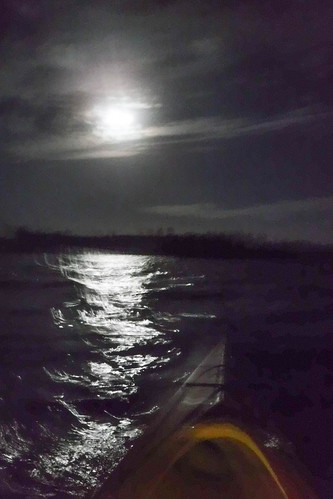 To the north there were lightning flashes. I checked the radar and there was a large storm cell about 50 miles up the coast, but it didn’t look like a cause for worry. It was just adding some pyrotechnics to the setting.

Eventually the sky began to brighten to the east. I found myself rotating to try to catch the best shots. 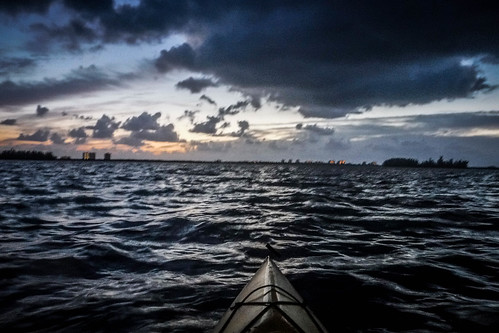 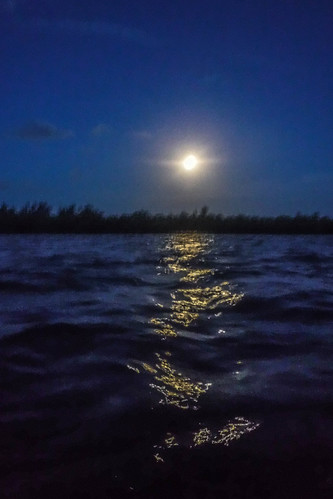 The lighter skies actually made it easier to photograph the full moon. 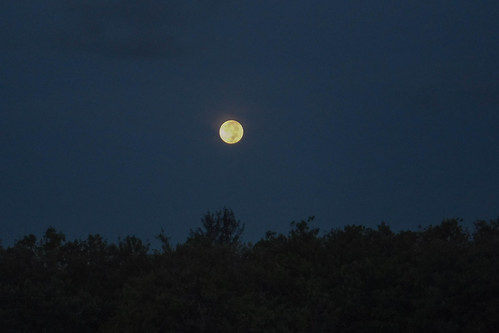 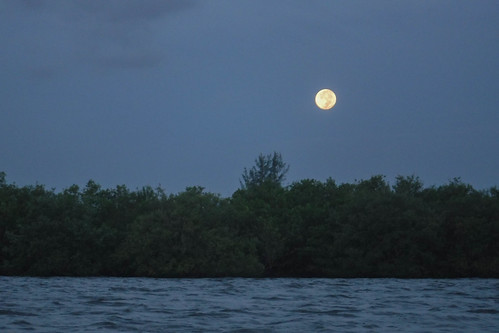 I tried to get a panorama showing both the rising sun and setting moon. The waves were just too bouncy.

Eventually the moon sank behind a cloud bank. It looked like the same thing was happening to the east in reverse. The sun was coming up behind some clouds, and it would take longer than I had available to clear the clouds. 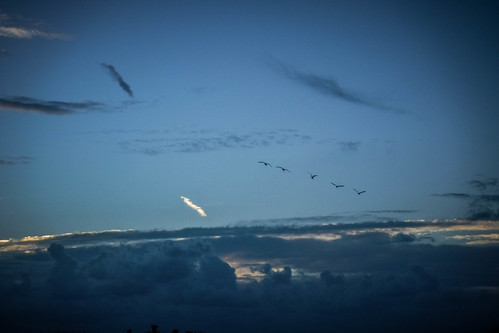 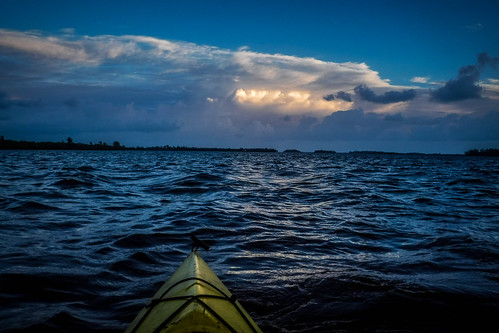 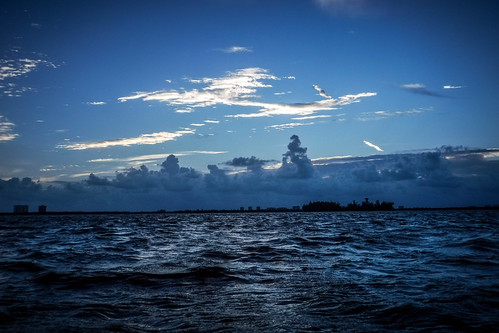 Reluctantly, I headed back, battling wind, waves, and an incredibly high incoming tide. As I approached Amy’s channel I noticed that the neighbors at the end of the channel still had their hurricane shutters up. I guess they had not yet returned. 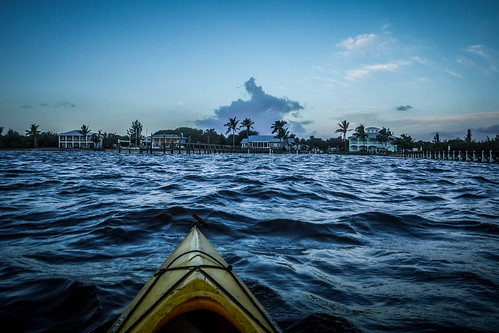 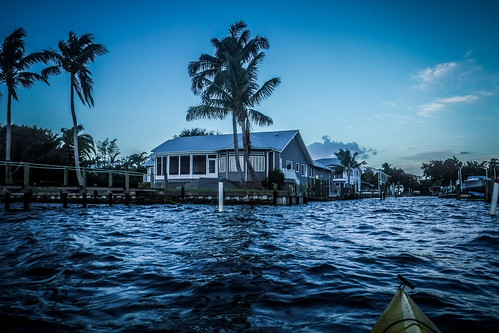 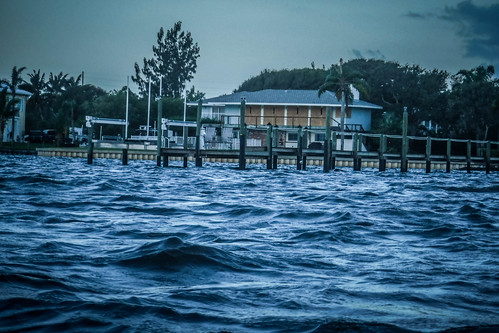 We had one more nice meal at at Harbortown Cove looking out over the water. Interesting shapes formed in the clouds in front of the rising moon, including one that looked like a witch. Appropriate for Halloween. 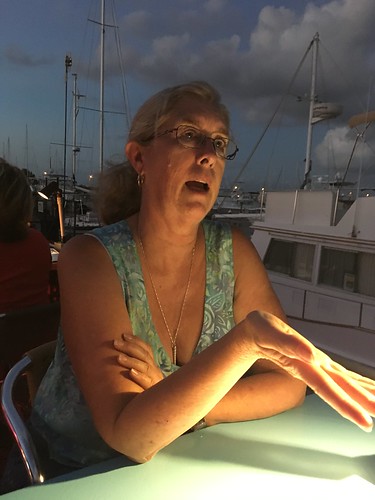 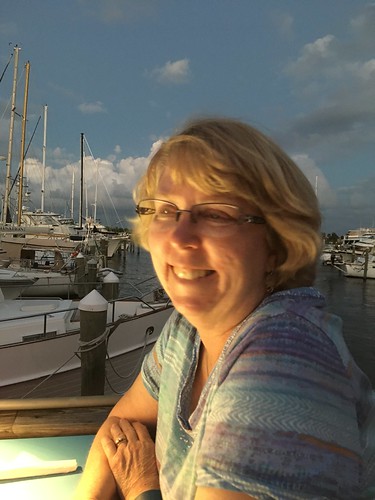 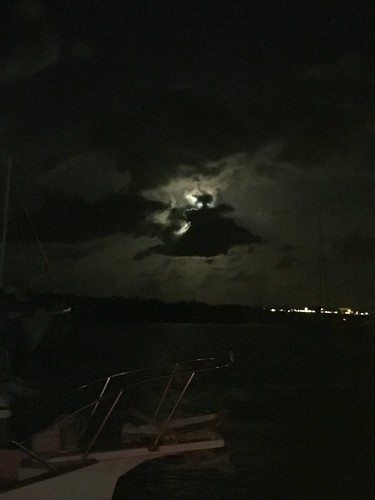 It was a tiring, but productive trip. We are hoping that Mrs. Wright finishes up her rehab soon, and can get settled into her new digs. At least we now have the place ready for her. 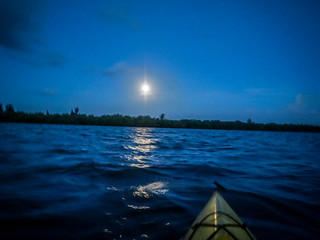 One thought on “Quick Weekend in Florida”