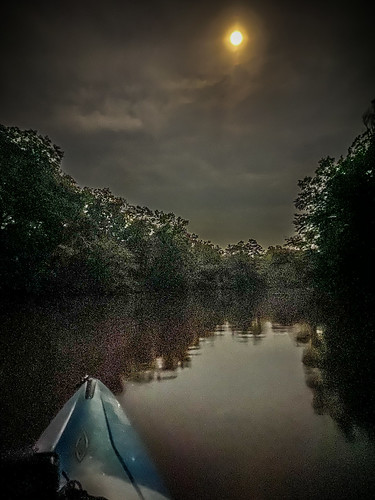 These past couple of weeks have been difficult with the loss of our brother-in-law.  I’m trying to catch up on several posts.  I was able to take a few kayaking trips during that time, mostly as a way to cope with stress.  One of those trips was a full moon kayaking trip on the Saluda River with the Saluda River Ramblers.

Nathan Weaver and his wife Angie started Saluda River Ramblers back in August, operating out of Piedmont and providing guided trips between Piedmont and Pelzer.  For this full moon paddle the Ramblers would be renting kayaks and carrying a busload of paddlers from Piedmont down the launch in Pelzer, but they were also inviting those of us with our own gear to join them.  We would be meeting at the ADA launch and paddling up to Allen Shoals.

I arrived at the Pelzer launch site early, as usual.  It wasn’t long before other paddlers arrived, though.  In all, twelve paddlers met at the launch with boats.  Angie helped organize and answer questions until Nathan arrived with about fifteen more paddlers on their bus.  Festivities were scheduled to get underway at 9:30.

Nathan and Angie passed out glow bracelets.  Everyone had flashlights or headlamps.  I was dismayed to find that the battery cap had one off of my headlamp, so it was unusable.  I had to create a makeshift headlamp with one of my Maglights.  However, with the full moon I rarely turned on my flashlight.

We were asked to find a buddy for the trip.  Most everyone already had a partner, so I paired up with a couple of guys in a tandem.  Mauricio and Tim turned out to be great paddling partners and we had quite a bit in common.

Some folks were launching from the boat ramp, but we decided to use the ADA launch.  I was surprised at its condition.  The bench that extends for wheelchair access had been damaged so that it couldn’t be retracted.  I tried to hammer it back into place, but with no luck.  It made launching from the ramp a bit more difficult, but we managed.  Nathan later told me that they have had problems with the locals damaging the ramp and even cutting pieces off of it to try to recycle.  Seems we can’t have nice things.

The river takes on a completely different feel at night.  It was impossible to really capture with a camera. I had my GoPro set to Night Time Lapse mode and tried to use my Fuji, but I got the best results from my iPhone.  With the long exposure the GoPro shots took on a surreal impressionistic look. None of the shots from the Fuji came out.  For the most part I just tried to absorb the atmosphere and not worry about photography.

The route up to Allen Shoals was longer than I remembered against a current that was stronger than I remembered.  Even so, we made good headway.  There were lots of inexperienced paddlers on the trip.  I spotted one guy struggling against the current, wobbling back and forth in a stubby rental while employing very bad paddling technique.  I made a couple of suggestions that helped him straighten out a bit.  The current and distance proved too much for many of the paddlers, though.  Most of them turned around before reaching the shoals.

We passed under a railway trestle then eventually made it to the Highway 20 bridge.  There was some activity on the highway with lots of blue lights flashing, but we couldn’t tell what was happening.  As we approached the shoals the current got stronger and there were a few submerged rocks.  Most of the paddlers still with us pulled over to the small island just below the shoals.   Mauricio, Tim, and I paddled right up the the rapids.  I tried my hand at a bit of night surfing, then turned and rode the small standing waves back down to the end of the island.

The trip back was more leisurely with the current.  I had a chance to chat with my paddling companions.  Mauricio and Tim are both real estate agents from Greenville.  Mauricio is a fellow musician, so we had quite a bit to discuss.  When he’s not running Saluda River Ramblers Nathan is an environmental impact engineer.

We got back to the launch to find paddlers waiting for their ride back to Piedmont.  I guess that’s the price of turning back early – you have to wait for the bus driver.  Most of those that had brought our own boats managed to make the four-mile round trip up to the shoals.

The route is below.

I did put together a time-lapse from the GoPro imagery.

I didn’t get back home until nearly 1:00 am, but it was a great trip and a much-needed distraction from family tragedy.  The Saluda River Ramblers did a great job of organizing the event, and I’m glad I joined them for this excursion.