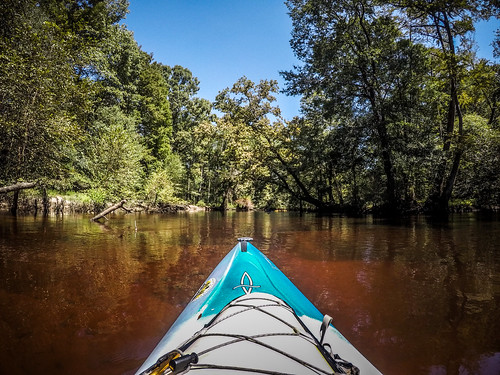 The first Saturday of each month the Bamberg County Chamber of Commerce sponsors a trip on a section of the Edisto River. I have tried to attend as many of these as I can. The events are well-organized and I’ve met some great people. This month we did a section of the river that began at a private launch on the South Edisto downstream from Brabham’s Landing, continued past the confluence of the North and South Edisto, and ended at another private landing on the main stem of the river.

The instructions were to drive down to Brabham, then we could follow someone over to the private landing. I had the directions to the landing, so I drove straight there. I found a large group already gathering. I unloaded my boats and met up with George Montgomery and Hans Herrman, with whom I had been paddling on these trips. More folks gathered, and Jerry Bell rounded us up for his instructions.

From there we caravanned to the take-out. The route led us down multiple dirt roads. My car would be in serious need of a wash after this trek.

Shuttle back to the landing, and we got underway. The launch was on a small side channel that opened onto the North Edisto. George, Hans, and I set out on an absolutely stunning morning.

The Edisto never disappoints. I know I’ve taken many trips along this river and the photos can get repetitious, but floating along on its current just soothes my soul. After the family tragedies of this week that was something that was sorely needed.

Another reason I like these Bamberg County CoC trips is because they are so well-organized. Scouting trips are made before each trip to make sure that the path is clear. If limbs are down across the river they trim them. Even so, in Jerry’s instructions he pointed out some places we would want to use caution and some side routes we should take that aren’t blocked. These locations were marked with caution tape so we wouldn’t miss them.

The bright sunlight really brought out the tannin-stained colors of the Edisto.

Unlike the ADD nature of my friends at Lowcountry Unfiltered, George and Hans were keen to get on down the river without much delay. We paused only occasionally for a sip of water or for me to change a camera battery. Soon we found ourselves at the confluence of the North and South stems of the Edisto. A small cabin sat conspicuously at the point. The North Edisto seemed a bit smaller than the South, but from here on the river widened.

The confluence is on a deep oxbow. You could actually bypass the confluence through a shortcut across the oxbow, but I didn’t want to miss it. Downstream from the oxbow is an old railroad trestle that used to pass through the logging village of Embree, once located on the banks here.

We passed up many inviting beaches. I’d give the subtle hint, “You guys want to pull up here for lunch?” but we kept going. One one of these beaches there was an encampment with a couple of tents. The camp was surrounded by tRump flags and Confederate flags. Politics aside, I had to wonder. Why would someone even bother with this? “I’m sorry honey. We couldn’t bring food for breakfast because we had to bring the flags.” This has truly gotten to be a cult. Sadly (or fortunately), I didn’t get a good shot of the camp, photographic or otherwise.

Before long we were reaching the take out. It was just after noon, so we had made amazing time.

I bid farewell to George and Hans, who were keen to get back to the Upstate. I had lunch with me, so I joined Hugo and one of his friends. A bevy of kittens joined us. Apparently there were many of these around, none very tame.

The trip was about 9.5 miles long. Here is the GPS track:

Hugo had told me about the logging ghost town of Embree not far from the confluence of the North and South Edistos. Of course, if I was this close and it was a ghost town I had to check it out.

I had down a bit of research on the town when Hugo first mentioned it after his scouting trip for the Bamberg excursion. The town was named for John William Embree, a Chicago businessman who speculated in lumber throughout the southeast. Like Benjamin Franklin Ferguson and Francis Beidler, Embree bought up large tracts of land to log cypress lumber in the period after the Civil War.

As for the town named for him, I found a description of Embree in an Orangeburg newspaper.

Several miles from what is now U.S. Highway 78 was the former town of Embree on the Edisto River that sprang up around a large lumber mill.

The thriving mill was located on the curve of the river where it was crossed by Southern Railroad.

The first known occupant of Embree was a Mr. Walker, who operated a shingle mill there. The town was also home to a popular picnic ground known as “The Quarters.”

1Walker sold his shingle mill to a northern firm which changed the name of the business to Embree Lumber Company and established a sawmill and planing mill. The lumber — as much as 4 million feet of cypress and pine — was loaded in car boxes and shipped by rail on the company’s spur tracks. The lumber sold for about $20 to $22 per meter.

Timber was purchased from area landowners for approximately 50 cents an acre, with the prices increasing in later years. Timber on land near the river was shipped via barges and timber farther from the river was transported by train.

Embree Lumber Mill maintained its own school and interdenominational church for its 100 employees.

A resident of the town recalled when the area was flooded by the river, requiring an evacuation.

The town of Embree was also a flag stop for the train. Some residents would catch the train early in the morning to go to Branchville to shop and return by train that evening.

As the community grew, electric lights and a commissary were added.

The Embree Lumber Company sold its holdings, and the business gradually declined in the 1920s, with the equipment eventually being sold. The village steadily declined. Today, there are few signs that Embree ever existed.

The site remained relatively forgotten, except by a few fisherman, until camping and vacation home sites were offered for sale in the 1970s.

I found several references to Embree in historic newspapers. In addition to the aforementioned flood, there had been a large fire at the mill as well as labor unrest and rumors of race riots. Most of these would be typical happenings for a remote lumber town. I did find a couple of interesting advertisements for War Bonds for WWI, sponsored by the Edisto Lumber Company at Embree.

Consulting my vast collection of maps I found a 1900 map of South Carolina railroads. This map, as well as an earlier one from 1880, simply list this area as “Edisto” or “Edisto Station.”

A 1921 USGS Orangeburg Quadrangle topographic map shows a substantial number of structures in the area and does list it as “Embree.” There are two railroad spurs, one headed further in the Edisto Swamps and another running by the mill.

Visiting this location meant crossing to the other side of the Edisto River from our private landing, which mean finding a bridge. I crossed the river on US 78, then took the road toward Bamberg. There I found a dirt road heading toward my coordinates for Embree. Sadly, I couldn’t make it down to the area I wanted to explore. Elaborate gates blocked my way forward. Oh well.

Even though I wasn’t able to find the ghost town of Embree the day was a success. So far I’ve paddled 107 miles of the Edisto, but I still have huge gaps of unexplored areas.

The October trip will fill in one of those gaps, from Kill Kare Landing on the North Edisto down to Zig Zag Landing on the main stem. I’m looking forward to it.