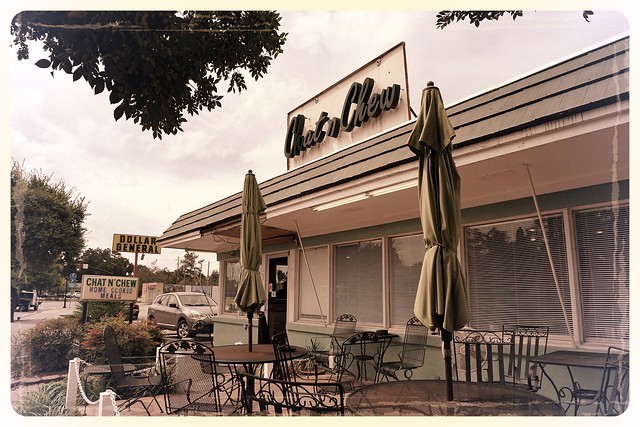 I do my homework before I go out on these extended photo expeditions. I like to know what’s in an area so that I make sure I can get to my intended target. Sure, I miss things. There were lots of things I had to skip on this particular trek. Sometimes I find too much, and those extra places of interest become distractions from my intended target. Sometimes, though, things work out perfectly, as was the case with lunch at the Chat n’ Chew in Turbeville on this particular trek.

I had spent some time in the South Carolina Room at the Greenville County Library. In a book entitled “A Pictorial History of Clarendon County” I found a page with “Popular Stopping Places along 301.” At the top of the page was an old photo of the Chat n’ Chew. 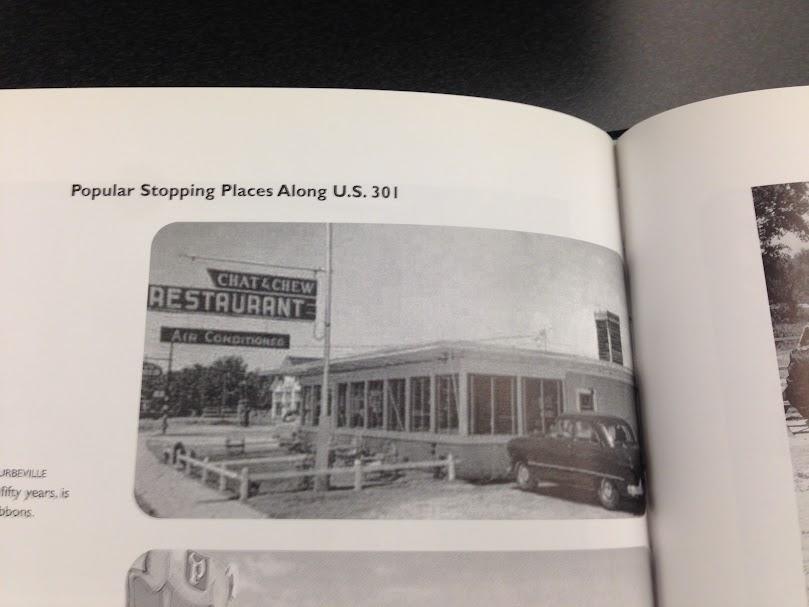 It was about 12:30 when I reached Turbeville and I had been driving all morning. At the south end of town I spotted the restaurant and remembered it from my research. What better way to have lunch than to stop at one of the remaining Tobacco Trail establishments? I pulled in. 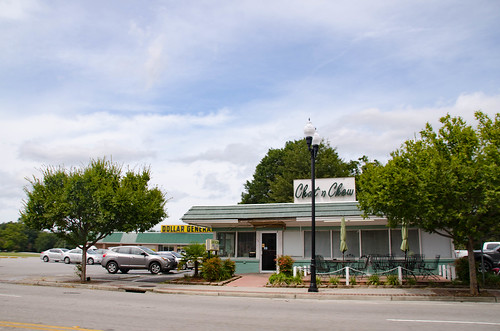 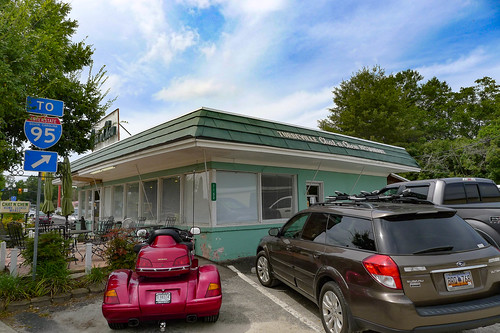 One of the first things I noticed was that there were multiple variations on the name. The image from my book had it as “Chat & Chew.” Even on the current signage there was both “Chat-n-Chew” with dashes and “Chat n’ Chew” with an apostrophe. Most of the online resources I found have the apostrophe, so I’ve stuck with that for this post. 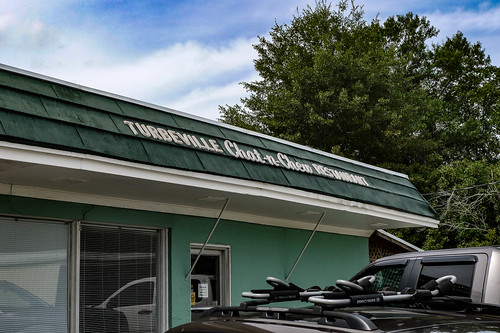 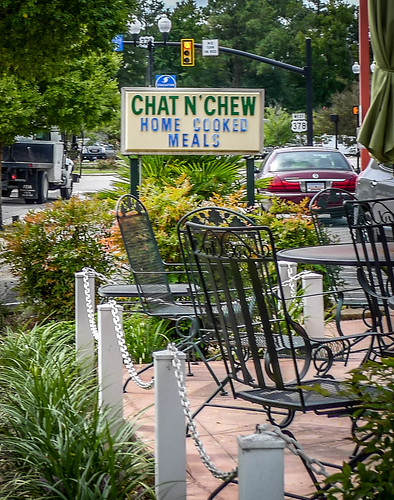 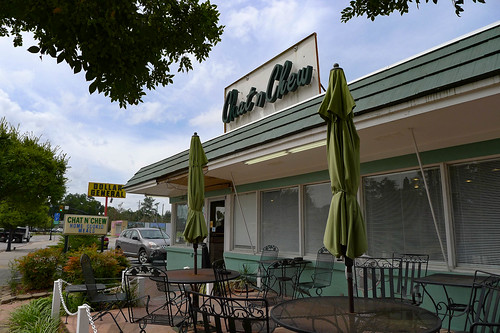 First a bit of background…

The Gibbons and their three daughters ran the place for many years, then it changed hands several times. According to an interview with current owner Bernard Blackmon, the quality of the restaurant went downhill during this time, and it looked like the restaurant might close. Blackmon and his wife Willie were long-time residents of Turbeville, and hated to see the place closed, so they bought it. Blackmon was especially concerned that if it closed, the Chat n’ Chew would have to be torn down and rebuilt because “so many regulations had changed and the restaurant had been grandfathered in.”

An enlarged postcard from the 1950s hangs on the wall of the restaurant as a reminder of the Chat n’ Chew heritage. This is a color version of the photo I found in the book. 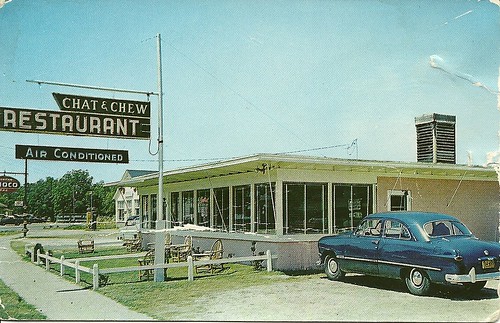 Inside the place was small. There were a few tables and a row of booths. There were a few lunch patrons. These all looked like locals. Many were senior citizens. One table of women were wearing scrubs. The place was a pleasant, clean green that was oddly soothing. There were lots of local touches, such as placemats with advertising from other local businesses. 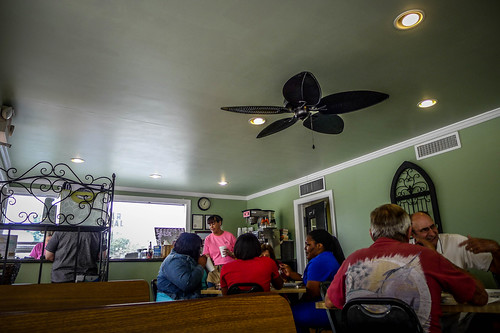 It’s my understanding that the specialty is breakfast. I love finding a place like this for breakfast, and was sorry that I had missed out. Perhaps when I come back this way for the remainder of the Tobacco Trail I can use this as a starting point with breakfast.

However, I was here at lunch, and that was what was available to me. There were some standard short-order items such as hamburgers, club sandwiches, etc., but the most popular fare was the meat and three. I had to try it. I ordered a pork chop with green beans, okra and tomatoes, and rice. When it arrived the okra and tomatoes were served over the rice, which was perfect. There was also a sliver of cornbread. Of course, the only beverage appropriate is good old Southern sweet tea. 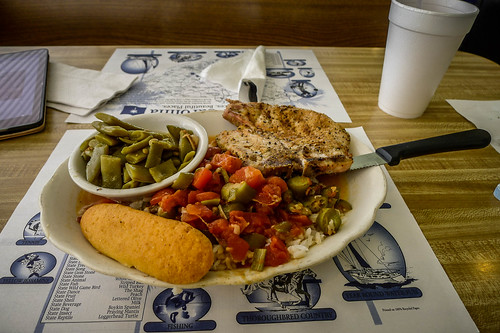 It was absolutely fantastic. The pork chop was seasoned perfectly, and I almost wish there had been a second one. The okra-tomato-rice combination was excellent. My only complaint was that I’d occasionally get a fibrous bit of okra, which wasn’t pleasant. Green beans are green beans, and you have to make an effort to screw those up.

What I didn’t expect was dessert. The options were coconut pie and some other type which I promptly forgot when I heard the word “coconut.” It was perfect. It reminded me of my dad, as this was his favorite. 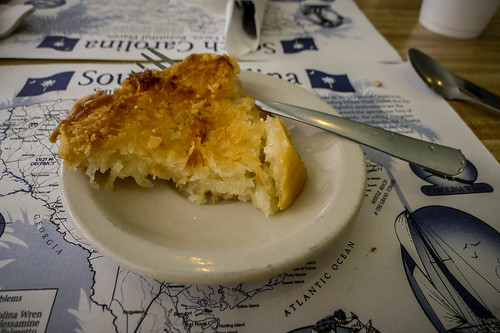 With drink and dessert included, lunch came in well under $10. Can’t beat that.

As I enjoyed my meal I watched the local patrons. Three elderly women were getting up to leave and one with a walker was having particular difficulty. A table of men stood from their meal, took her by the arms, and made sure that she got out to her car safely. It was nice to see.

All in all my lunch experience at the Chat n’ Chew on the Tobacco Trail was a very pleasant experience. I rarely get down this way. Ok, I NEVER get down this way…this was my very first visit to Turbeville as far as I can remember. However, if I ever do pass back through here at mealtime I’ll have to remember this place. It’s worth a stop.

One last note. While searching online for vintage postcards I came across the Chat-n-Rest Motel in Turbeville. I’m not sure that it was associated with the restaurant, though. The proprietors’ names are different. The back of the postcard says “restaurant adjoining.” It’s possible that the motel had one owner, and the restaurant was owned by the Gibbons. 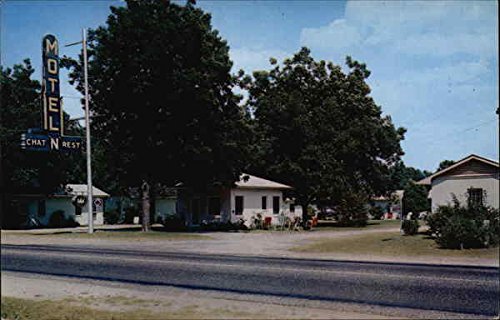 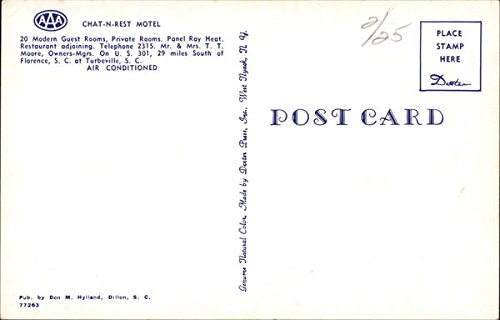