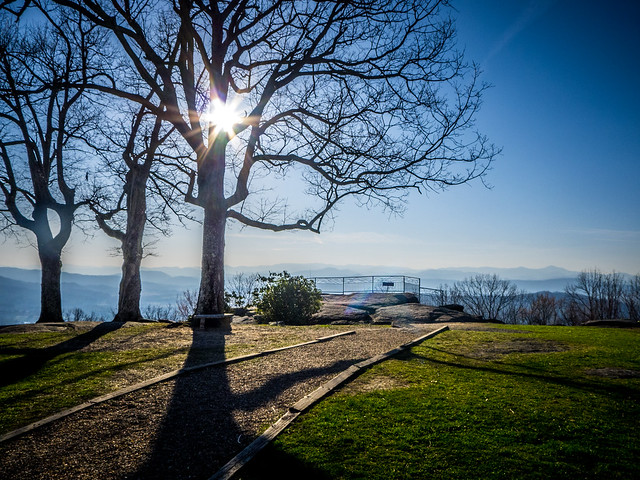 We had spent a delightful afternoon at a birthday party for a two year old, the daughter of friends that live in Hendersonville. Glynda was flying into Asheville later that evening, and I wasn’t keen on making two trips up the mountain. Laura caught a ride back to Greenville with some other friends, and I decided to hang out in Hendersonville while I waited for my sister’s plane. It gave me a bit of time to explore.

It was already late afternoon, and light was not ideal down in the valleys around the town. Plus, I only had my little Panasonic with me. I drove on into town and down along Main Street. There was a bit of activity, but the shops and lots of the restaurants were closed. Eventually I found myself on the west side of town at the Oakdale Cemetery, looking at the historical marker for W. O. Wolfe’s Angel from Thomas Wolfe’s Look Homeward Angel. Since I seem to be on a cemetery kick this weekend I decided I needed to check it out.

I drove along the narrow lanes of this city cemetery and eventually reached the fenced in angel. As I drove along I could see tat this would be an interesting place to explore when i had more time, but right now I only had time for my specific target.

This is the actual angel from Thomas Wolfe’s novel. His father, W. O. Wolfe, was a headstone carver, and used the statue as an advertisement for his business. He himself did not carve the angel, but had purchased the statue and had it shipped from Italy. In 1906 the angel was purchased for the grave of Margaret Bates Johnson. The angel was fenced in when it was later damaged by an “ardent fan.”

As with many headstones in southern cemeteries, the angel faces east. This meant that it was severely backlit, not great for photography. I tried to use the small camera flash to offset the bad lighting. 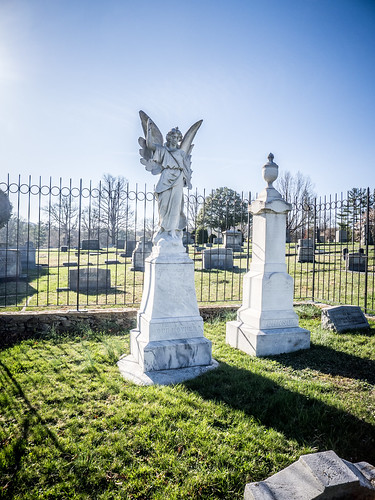 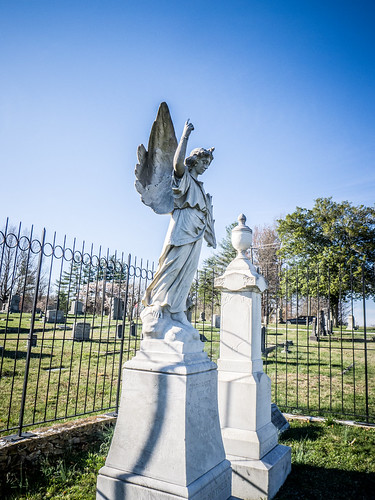 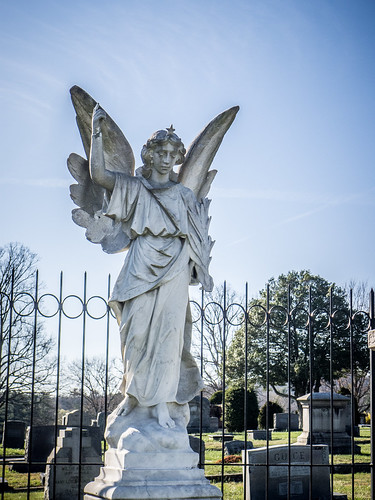 Even though I didn’t have time to do much more exploration here, there were a couple of stones that caught my attention. There was one bas relief angel on another stone. 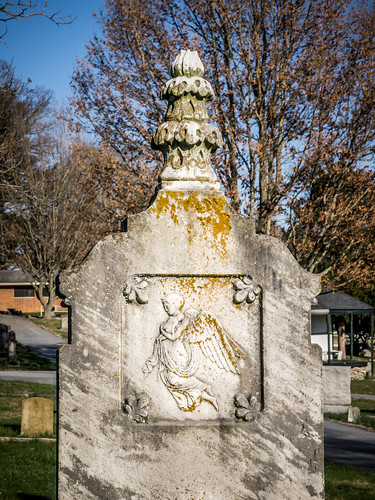 There was also an elaborate statue of Jesus flanked by two more angels. The grave also spelled out an unfortunate phrase. 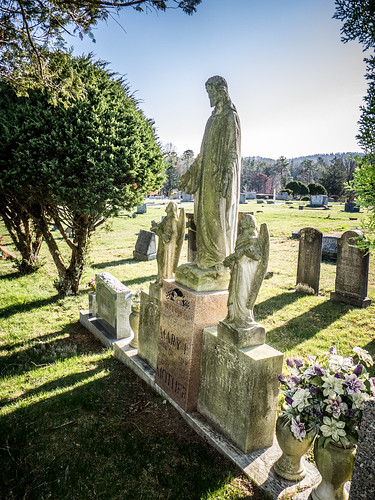 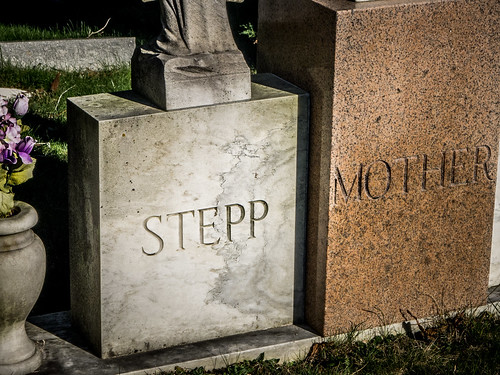 The sun was setting, but I would need to be closer to Asheville in order to pick up Glynda when the sun actually set. I wouldn’t be able to get any photos of the actual sunset, but had to content myself with late afternoon shots. I decided to drive up to Jump Off Rock for some westward views.

Laural Park is a separate, incorporated town west of Hendersonville and on the western slopes of Echo Mountain. A five mile road winds through the community and eventually ends up at the overlook known as Jump Off Rock. This is yet another one of those places named for a suicidal Indian maiden, like Blowing Rock, Issaqueena, etc., etc. 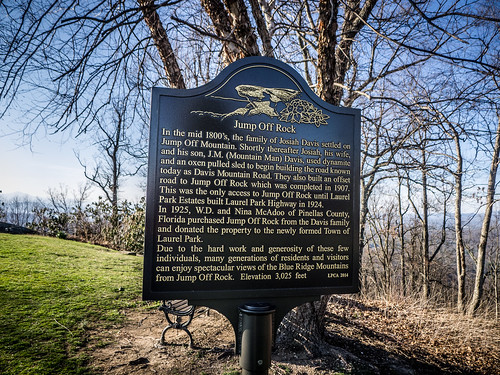 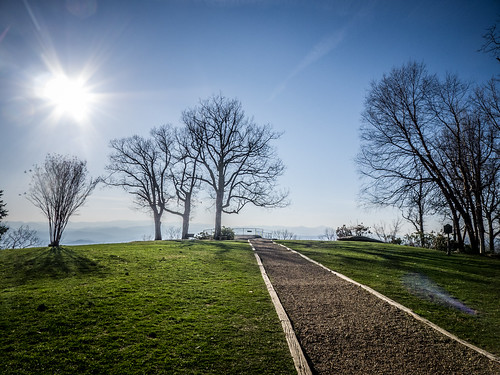 The area has been developed as a very nice park. There is a large condo complex at the top of the mountain within site of the rock. The overlook has spectacular views both to the west toward Pisgah and the national forest area, and to the north toward Mills Creek. 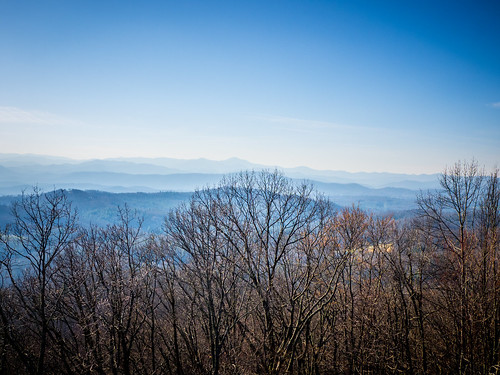 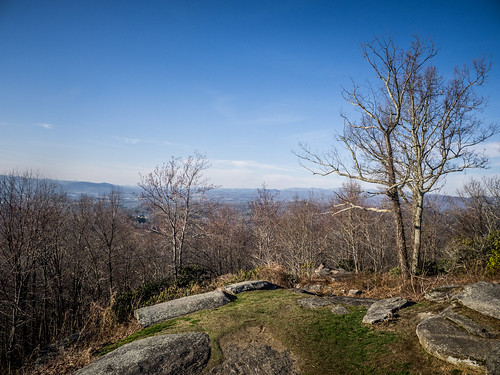 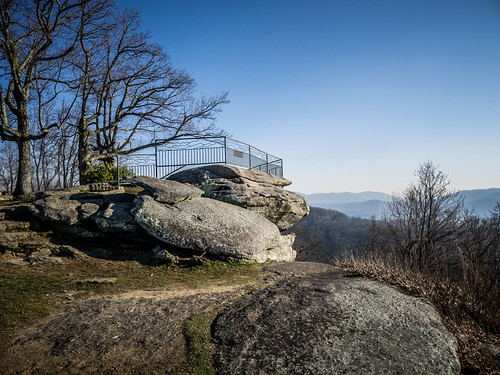 After scrambling around on the rocks a bit, I decided to take advantage of the long shadows cast by the setting sun. I had an idea for another cinemagraph. Here’s the result:

I just had time to make it to the airport to get Glynda, but it had been a successful late afternoon killing time.

One thought on “Killing Time in Hendersonville”