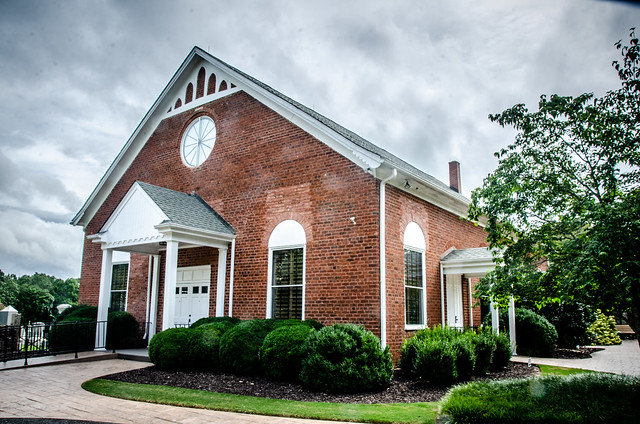 I worked in Spartanburg county for fifteen years. During all of that time I never got around to visiting Nazareth Presbyterian Church. I knew it was one of the first churches in the area, having been established around 1765, but for some reason I thought that the building had been updated and no longer retained its historic character.

I was wrong. When I had driven by it I had seen the new Family Life Center (a.k.a “gym”) and had thought that IT was the church, somehow missing the older building right next to it. While out doing some research on another project about church architecture Alan Russell and I finally paid Nazareth a visit.

The current sanctuary was built in 1832 and is the oldest public building in continuous use in Spartanburg County. The South Carolina Picture Project has this summary of the history of the church.

When Scots-Irish settlers from Pennsylvania and Ireland established a community along the Tyger River in the mid-eighteenth century, they also organized a religious group called the Tyger River Congregation. Records differ, but this was in either 1765 or 1766. The Presbyterians first met for worship in members’ homes. Soon afterwards, a log meeting house was built for the congregation roughly 200 yards from the present church …, and in 1772 the church was formally recognized and became part of the Philadelphia Presbytery. Following the Revolutionary War, a larger frame building replaced the cabin. This brick edifice followed in 1832 and remains the oldest continuously-used public building in Spartanburg County.

In 1872 the church was incorporated as Nazareth Presbyterian with the state of South Carolina. The Yorkville Enquirer reported the event.

CORRECTION NOTE: I was able to find renewals for the charter going back, so 1872 wasn’t the date of original incorporation. It was mentioned in The Carolina Spartan for 1866 and I’m sure it appears even earlier. The article about does say “…and shall continue in force for the term of twenty-five years.”

It was later in the morning when Alan and I arrived. Storms were threatening to the west, but we still headed out to explore. The sanctuary did look old, but it also looked like improvements had been added, such as the covered portico entry. Looking at other buildings from that time period, such as the Old Brick Church in Fairfield County, there was probably just a door leading straight into the church.

I was surprised to see that the church isn’t on the National Register of Historic Places. If the original building was substantially modified, that would make ineligible for listing. The SC Picture Project confirms that modifications were made to the church.

Several modifications have been made to the sanctuary since it was built in 1832. Worshipers once entered the building from the side, as two doors were available – one for the men, and one for the women, or so the story goes. Today a single front door – which originally was used as a side door – welcomes parishioners, though the side entrances remain …. The twentieth century saw new buildings added to the church grounds, including an education building and a Family Life Center.

I peeked through the front door to get a glimpse of the interior. It looks like there is a balcony. Given the time period, at one point this was probably a slave gallery with an exterior entrance.

We headed back to the cemetery, which was extensive. There were headstones ranging from ancient to modern, simple hand-engraved to elaborate.

According to the Find-a-Grave listing for the cemetery there are 1,747 burials here. Alan and I had already been out exploring and we were on a bit of a schedule. Plus, the weather was threatening. It was a bit daunting. Exploring all of it would not be possible.

Apparently folks thought that keeping track of the cemetery was daunting as far back as the turn of the 20th Century. The Abbeville Press and Banner reported in 1909 that Nazareth had developed an innovative way of tracking burials in the cemetery. The article hoped that this process would be adopted by others.

The article states the following…

There are two cemeteries at Nazareth, an old one in which there are a number of historical graves, and a new one….the oldest grave that bears a mark is that of John Wilson, buried in 1784, although it is known that there were a number of burials before that time. There are now about 700 graves at Nazareth, only half of them marked.

That means about a thousand graves have been added since then. I don’t know if they were able to keep up this system.

The earliest grave I could find was from 1802. Most of the stone had eroded, but what was there showed that it was hand carved.

We found quite a few signature stones. Our old friend W. T. White was present, as as his brother, E. R. Hall, who had carved a rather elaborate obelisk.

There was Boyne and Sprawl, which I’d seen in other cemeteries, and a new one for me, Brownson from Spartanburg. There was also another Spartanburg carver I didn’t recognize.

Some of the family plots had names I recognized from the region such as Moore and Reid.

Behind the church was the old Caldwell cabin, which I suspect had been moved there.

More interestingly, though, was a path behind the cemetery which led down to a spring. There were old markers and even some old headstones along the path. There were also benches and some markers. Alan said that this looked like someone’s Eagle Scout project.

There was much more of the cemetery, but we were really pressed for time and the weather was threatening.

Alan and I left Nazareth and went to lunch and we were sitting in the restaurant the bottom of the sky fell. We had to wait for awhile before we could even get back to the car. That effectively put an end to the day’s exploration. We had visited several locations that will figure into a later post. But for now, I’m glad that I finally stopped by Nazareth Presbyterian. I’m going to have to return and do a more thorough exploration of the church.

One thought on “Journey to Nazareth”