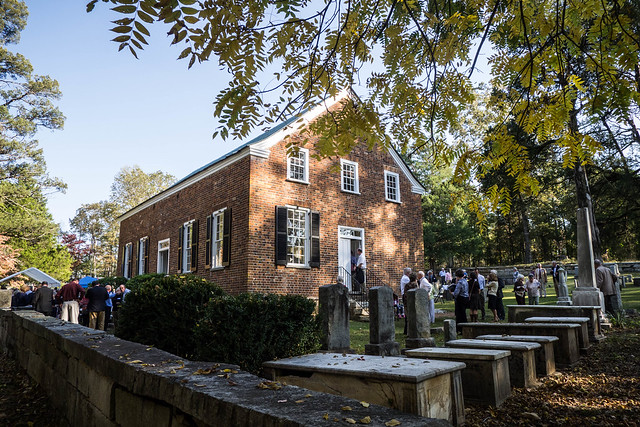 Ebenezer A.R.P. Church, otherwise known as “The Old Brick Church,” is one of my favorite places to explore and photograph. It’s on my list of historic churches where I would love to attend a service.  I finally got the chance this past Sunday, Reformation Sunday on the liturgical calendar.

Originally founded as Little River Church, the Old Brick Church is on the National Register of Historic Places. It was renamed Ebenezer so as to avoid confusion with Little River Baptist Church just up the road.

The current sanctuary was constructed in 1788, and was severely damaged by passing Union troops. Union soldiers under Sherman’s command dismantled part of the church to rebuild nearby bridges destroyed by retreating Condeferate troops. One Union soldier left a note of apology for “defacing your place of worship.” The original now hangs on the wall of the church. 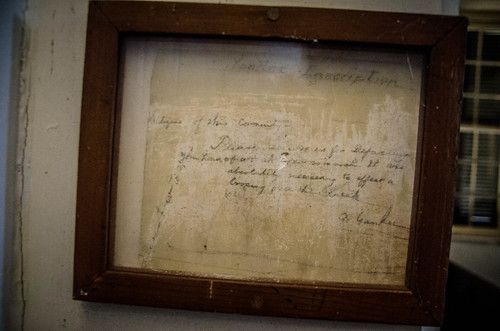 The congregation never fully recovered from the effects of the Civil War. Membership dwindled, but the church hung on until 1920, when regular services were discontinued. The property fell under the care of nearby Bethel A.R.P. Services are now held at Ebenezer three times a year, and are by invitation.

Earlier this year photographer Bennie Brawley and I spent some time photographing Mount Zion Institute in Winnsboro for the Fairfield County Museum and FOMZI, the Friends of Mount Zion Institute. Sabi Cathcart works with both of those organizations, as well as serving as a trustee for Ebenezer. He graciously granted us access to the church when we finished with our photography in town.

Several weeks ago Sabi was once again very gracious to us, and sent Bennie and me invitations to the upcoming Reformation Sunday service on October 30. I knew I had to attend.

The date arrived and I headed on down for the afternoon service.  I thought I was leaving in plenty of time to get there early and take some photos.  However, it took longer to get there when I thought, and a crowd was already gathering. In fact, a deputy patrol car was parked on the side of the road with blue lights flashing.  It would be there for the entire service.

I found a place to park and walked to the front of the church.  There were tents set up all around the church, some for refreshments later, and some for overflow seating at the back of the church.  Two tables were set up where visitors could sign in and receive name tags.  I did both. 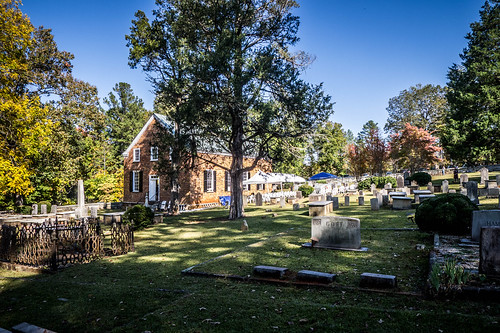 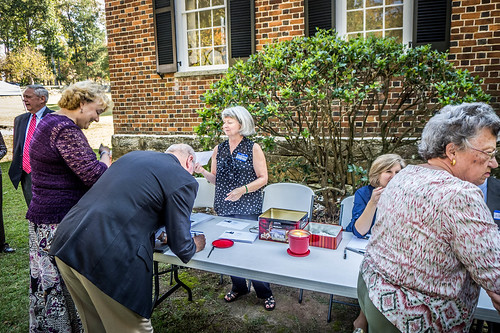 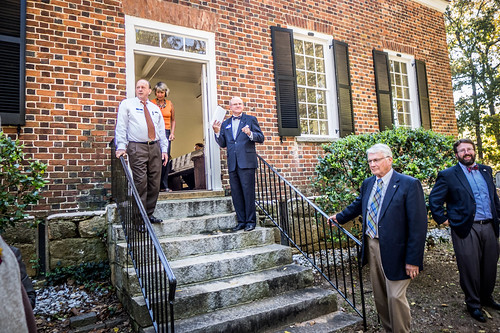 I entered and found a seat. The choir for the service was warming up a bit, but soon it was just the noises of a gathering congregation. My pew mates were friendly, and we had some mutual friends. This was their first time in the church, so I got to play tour guide. Eventually about 150 people gathered for the service. The main sanctuary was filled, as was the small balcony. I couldn’t see how many were in the overflow seating outside.

Soon the congregation was called to order by Alan Broyles, then David Hodges from First Presbyterian in Columbia gave a historical perspective on the church. The Call to Worship was an a capella Psalm. I was quite impressed with the level of congregational singing. It sounded wonderful in the historic setting. 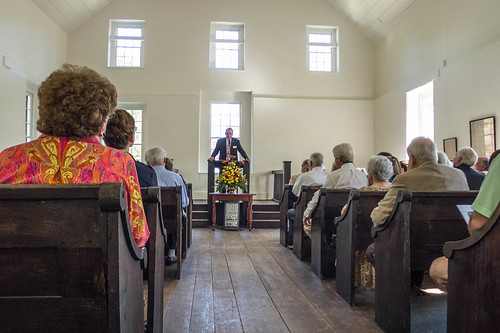 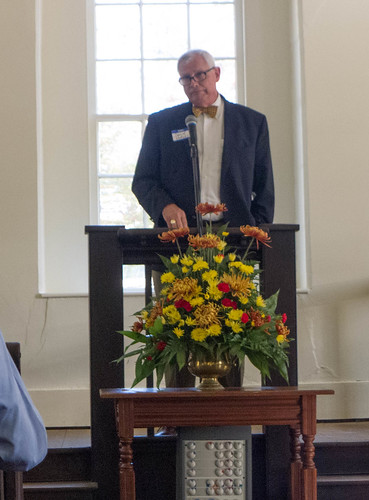 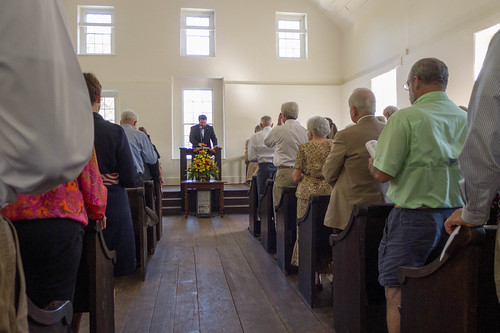 What followed were the typical elements of a Presbyterian service – prayers, creeds and offerings, led by Mr. Broyles. The choir from Centennial ARP Church sang an offertory. Their director sported a tight bun (a “Baptist facelift”, as Chip calls it) and wielded her baton like a light saber. Regardless of my pickiness with her conducting technique, she got a nice sound from the group with their presentation of John Stainer’s “God So Loved the World.” 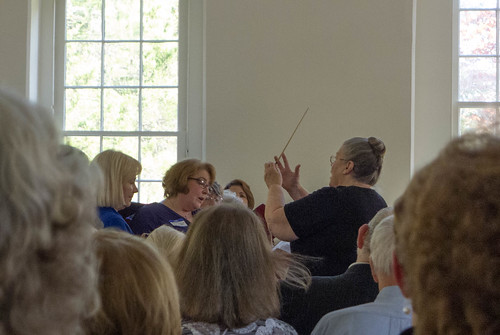 The scripture and sermon were presented by Dr. Derek Thomas, senior pastor of First Presbyterian in Columbia. I thought this an interesting coincidence, since Dwight and I had just visited there on Friday. Dwight had commented that Dr. Thomas is from Scotland, and is highly thought of by the congregation. 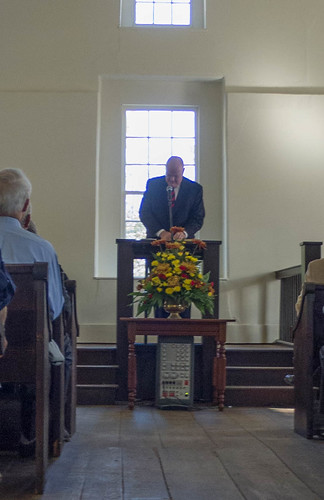 I liked his selection of text, particularly in this setting.

Do not say, ‘Why were the old days better than these?’ For it is not wise to ask such questions.
-Eccelsiastes 7:10, New International Version

It started as if it were going to be a very progressive sermon, but…alas. I had to keep reminding myself that I was a guest. This was not my denomination. They hold more conservative beliefs than mine. However, to me it seemed that some of the more conservative points in the sermon were a bit ironic given the context of the scripture.

The sermon ended with a setting of the 23rd Psalm set to New Britain, aka Amazing Grace. As with the earlier Psalm, it was robust, heart-felt, and enjoyable. There was a benediction followed by a rousing Doxology, then the service was over.

As I walked out I had a surprise. One of my kayaking friends from Lowcountry Unfiltered was also in attendance. James Martin had paddled with us on many occasions, but now has his hands full with five daughters. He doesn’t get to join us as often as he used to. It was great seeing him and meeting his family.

I spoke briefly with Sabi and thanked him for the invitation, then wandered over to the tents for a couple of delicious brownies. 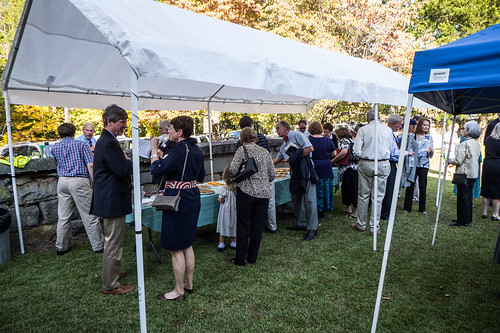 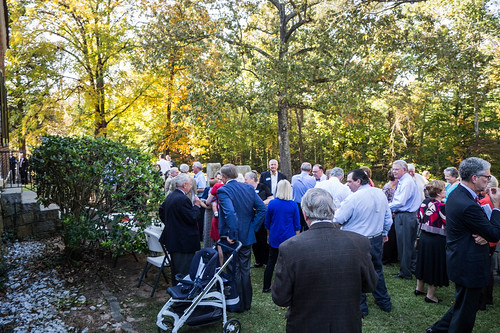 Since I’d had a previous opportunity to photograph the church, I concentrated on capturing the event. I didn’t send much time in the cemetery exploring, still feeling the effects of cemetery overload from Friday. Plus, the gnats were really bad and the heat was miserable for late October. 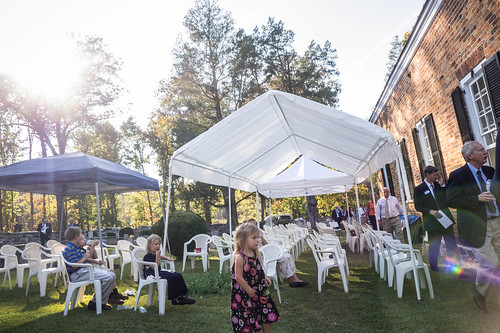 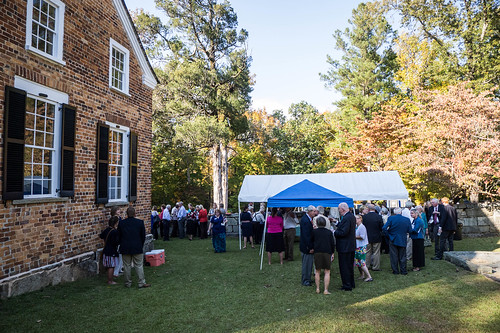 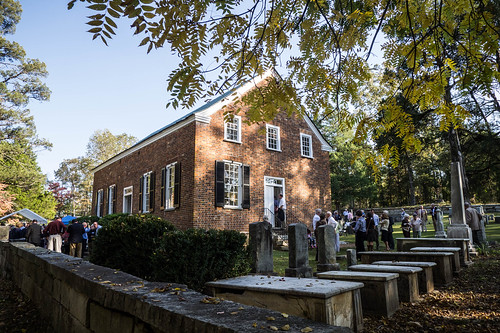 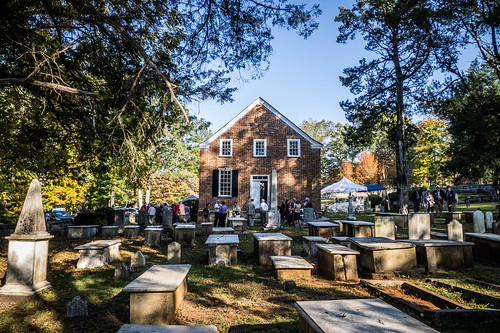 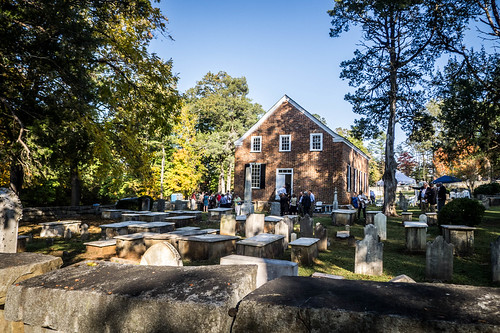 As I left the patrol car was still in position with its blue lights flashing. I guess folks get used to driving up and down this road with no activity at the old church. It was nice to have them there.

Despite our theological differences, I thoroughly enjoyed my visit to Ebenezer ARP. I would hope to attend another service here. I think I may make it a goal to attend a service at another historical church. Perhaps Macbee Chapel in Connestee? Horn’s Creek Baptist (once restoration is complete)? Maybe one of the Lowcountry Chapels of Ease? We’ll see. 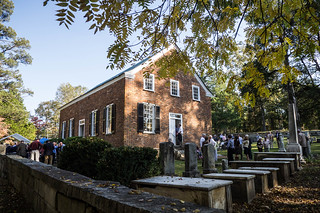