This week marks the tenth anniversary of the collaboration between the Furman Lakeside Concert Band and the Greenville Chorale. It’s of our most popular concerts, certainly the best attended. We had rehearsals Monday night, then Tuesday with the band. The concert was Thursday.

Laura and I were joined by my brother Stephen and his wife Cynthia. We had a picnic lunch, then assisted the Chorale by passing out fans printed with our upcoming concert schedule. 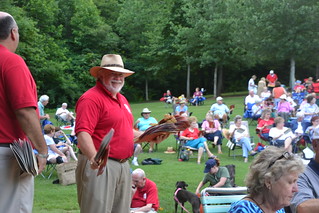 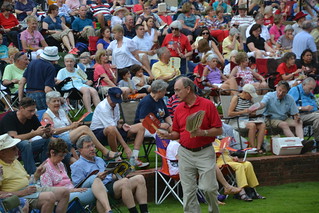 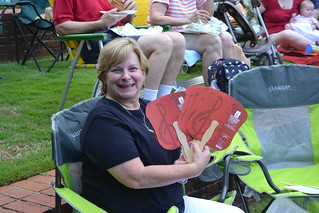 The photos above were taken by Stephen. I didn’t get around to taking any, except for this panorama from the stage showing the crowds. There were lots of others all around the lake.

My favorite shot of the evening was this one of Stephen and me that Cynthia took. 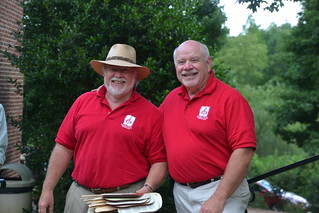 The concert went well. We did a some patriotic songs and several others, all lighter fare. Our new president of Furman, Dr. Elizabeth Davis, also participated by reading Lincoln’s Gettysburg Address. 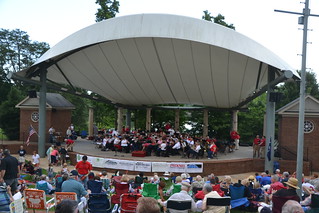 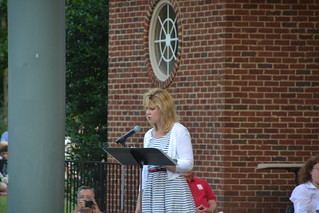 It always seems odd that we do Tchaikovsky’s 1812 Overture for the Fourth of July, as it commemorates a Russian victory over French forces. Oh well. Regardless, the opening of the piece is a Russian hymn. We sang that opening section this time. The piece ends with the chorus singing “God bless our gracious Tsar!” We changed the lyrics to “God bless America!”

There were cannons, but I never heard them. I was standing right behind an enthusiastic bass drummer.

Fourth of July and Penguins

I finally got our back yard under control…somewhat. My reward for this was a blazing case of poison ivy. I had never reacted to it before – ever.

In the evening we had friends, family, and neighbors over for burgers and fireworks. We actually had quite a bit of food (blowing our diets out of whack), but the hit of the evening were the penguins.

A friend of ours had shared these on Facebook with the following image: 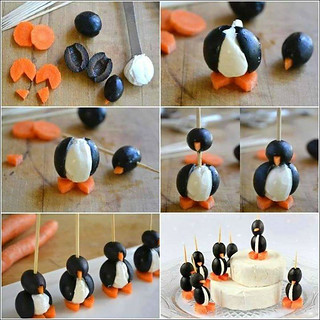 They looked super simple to make, so we gave it a try. 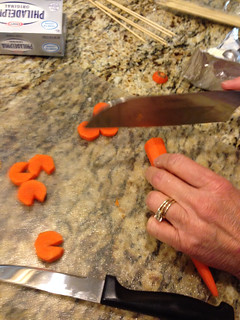 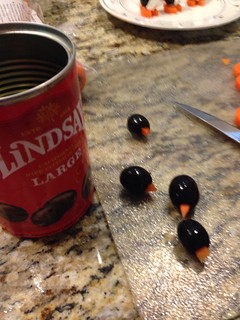 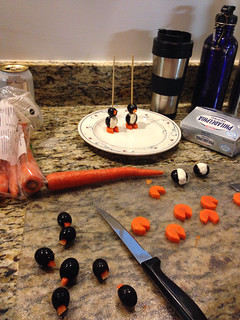 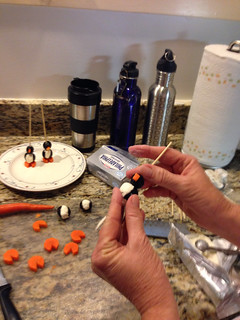 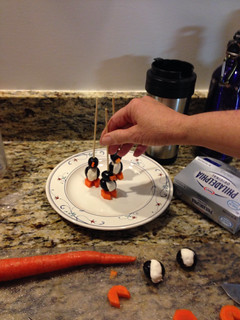 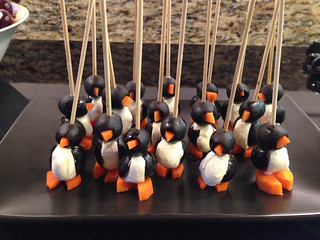 They were quite a hit, and were tasty, too. All it takes is cream cheese, black olives, and carrots. Another Facebook friend pointed out that this would work as well with mozzarella. Looks like there are lots of other variations, when I did a quick search online.

What do penguins have to do with the Fourth of July? About as much as the 1812 Overture does.

Saturday was a down day for us. It was breezy and cool in much the same was that typical days in July aren’t. We lingered on the back deck for most of the morning. Then we decided to go for a ride in the Mini.

We headed up Highway 25, then took the turn toward Saluda, NC. We found ourselves right in the middle of their Coon Dog Days. A parade had just ended, and people were heading back to cars. We managed to make it through, but lunch in the town would be impossible. It looked liked there were booths set up along the street, and if we had known about it, it might have been fun to explore.

Instead, we braved bands of cyclists and headed toward Hendersonville. It was busy, too, but we were able to get parked, and find a nice lunch. Dinner tonight was ribs and corn on the cob.

Oddly enough, I hardly took any photos over the weekend. On the Fourth I was too busy shooting off fireworks to take any photos. Still one more day in this holiday weekend. I suspect more down time, and maybe I can take a few photos.