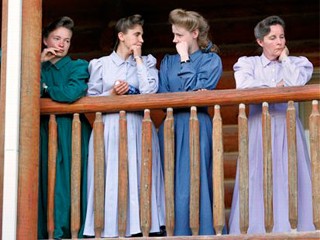 I stopped by our local sandwich shop for a quick lunch yesterday.  The lady behind the counter is of Islamic descent, and wears a head scarf.  She is always pleasant, if not a bit shy and deferential.

As I sat with my lunch, I thought about her attire.  I’ll be up front and admit that my initial reaction is always one of cultural xenophobia.  It brings to mind the treatment of women in general in Middle Eastern countries, and the lack of rights for so many of them.

About the time I’m ready to let loose with a round of mental condemnation, I pull up short.  What really motivates someone in their choice of attire.  Is it really a choice?  I am concerned for this woman if she were forced to wear this by her husband, but it could just as easily have been a cultural choice of her own.  She may simply feel more comfortable wearing that with which she is familiar.

It’s tricky navigating between cultural choices and abuse of rights.  It’s one thing for someone to say, “This is who I am and my choice of clothing reflects my religion and culture.”  It’s quite another to condemn one’s deviation from a strict dress code as an “abomination unto the Lord, thy God” (Deuteronomy 22:5).  Then there are those gray areas where departing from cultural norms bring not quite condemnation, but at least some scorn.

Questions of modesty and indecency aside, here are some things to consider…

Even among these there are gray areas.   What someone considers indecent within a society may be perfectly acceptable to others.

Of course, as I sat contemplating this, I did so in a dress shirt and necktie that I soooo want to be rid of.  Maybe my Muslim sandwich lady was actually pitying me.