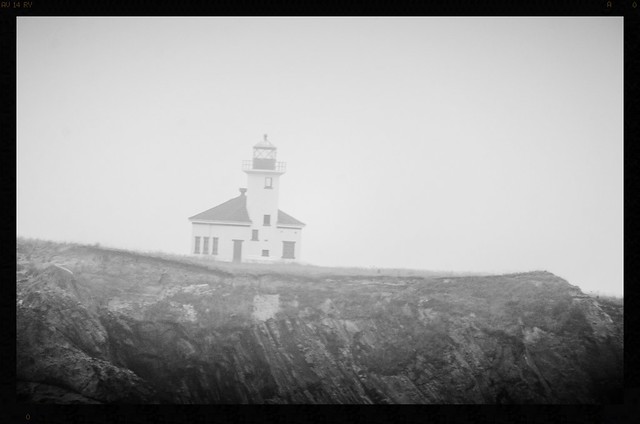 Where did July go? Normally this date would cause major consternation as I panic about the start of school. This is the second time around that I haven’t had to worry about it, and it shouldn’t bother me. Occasionally, though, it does. That’s why it’s nice to be traveling this week.

Laura and I found breakfast at the hotel, then headed over to Fred Myers to pick up a few supplies before meeting Aunt Ellen. I’ve not seen these stores in our area, but they are up in the Northwest. They are like a really nice Walmart, with groceries and higher end household goods. This turned into a more extensive shopping trip than we planned.

Back at the car we were approached by an older gentleman with an unusual proposition. He was admiring the Mustang, and said that his wife had one just like it. Unfortunately, his wife now has Alzheimer’s, and he was looking for someone who would appreciate the car. He would basically give it away for $5000.

It was tempting. If legit, it would be the buy of a lifetime. We made our apologies that we couldn’t take him up on his offer since we were traveling. However, I kept kicking myself mentally for not at least seeing if there was some merit to the offer. I’m retired. I could have driven the second Mustang back home across country. It wouldn’t be the first time I’ve driven a convertible that far in that direction.

We picked up Aunt Ellen about mid-morning and set off for a drive, this time in her Mercedes SUV rather than the Mustang since it would hold more people. First we went in search of the lighthouse we had seen last night. Last night I had found that it was the Cape Arago Lighthouse, and wasn’t too far from where we had been. We retraced our steps through Charleston and past the Bastendorf Beach turn off. There was a road marked “Lighthouse Road” at the correct spot, but it was also marked Private.

We continued past Sunset Bay State Park, looking for any place that might grant access. We found none. There was a scenic overlook, and Laura suggested that we pull in. I was just going to turn around, but she wanted to take a look. Good thing. There were several other lighthouse hunters there, and they had been informed that this overlook was about the only place where one could view the lighthouse. It was otherwise inaccessible. Unfortunately, it was about as visible from this point as it was last night because of the fog. 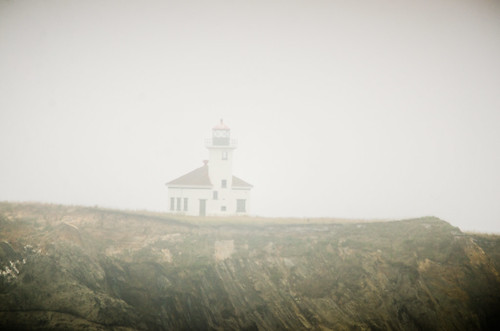 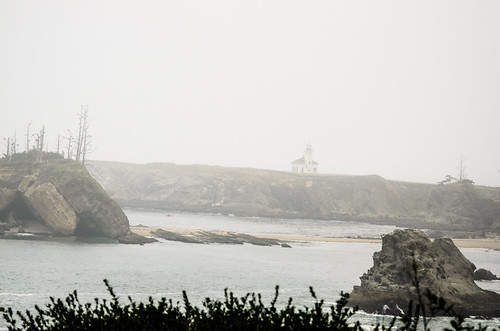 Strike one for the first lighthouse. However, that wasn’t the only one I had in my GPS. There was another a little ways up the coast. We headed north and crossed the bay itself. Aunt Ellen pointed out the beginnings of the Oregon Dunes, a long stretch of massive sand dunes along the coast popular with off roaders. As we road past we saw a couple of ATVs out on the dunes.

We continued on for another sixteen miles or so. There were sand dunes to the west, and lakes to the east. All along the route were state parks and campgrounds. However, all of the campgrounds indicated that they were full.

I found the proper turn off, and we soon found ourselves at Umpqua Lighthouse. It was still very foggy, but at least we could get to this one…sort of. The lighthouse was surrounded by a chain link fence and what appeared to be active Coast Guard housing. 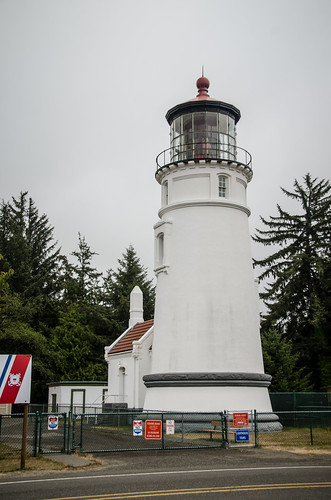 There was an overlook with information about whales that might be visible from this point. However, what drew our attention was not whales, but a roar from below. On the dunes below we could see hundreds of RVs and campers, and even more ATVs riding in every direction. We would learn later than this Dunefest, and it would last all weekend. 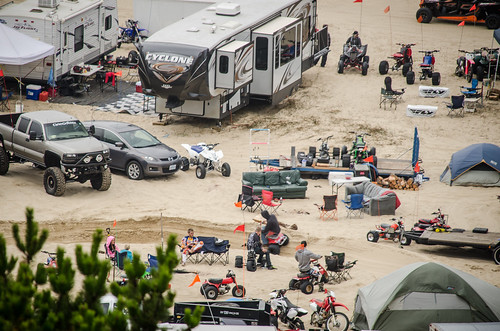 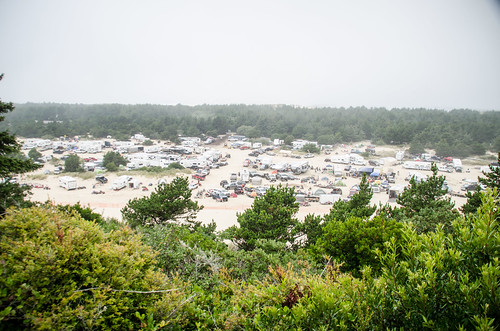 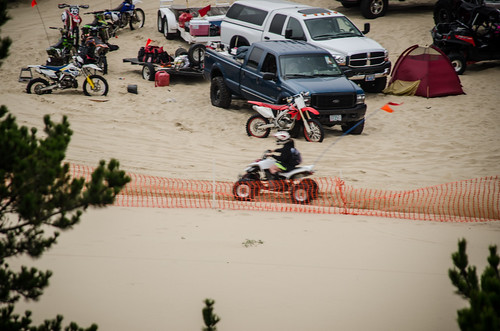 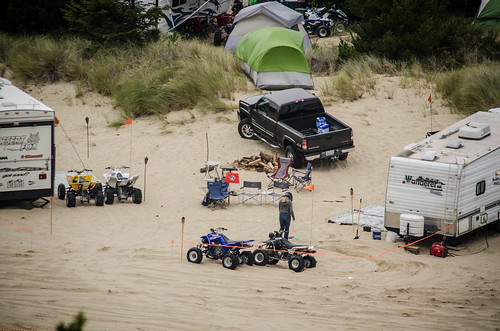 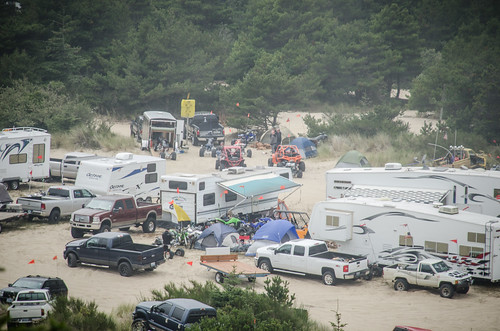 It was absolutely crazy. However, I couldn’t spot any of them wearing Still Suits.

Nearby was a building that served as a Coast Guard museum. At one time it housed sailors with the coast guard and served as a base of operations for this area. We walked in and reserved a tour for ourselves, then checked out the displays as we waited for our tour. 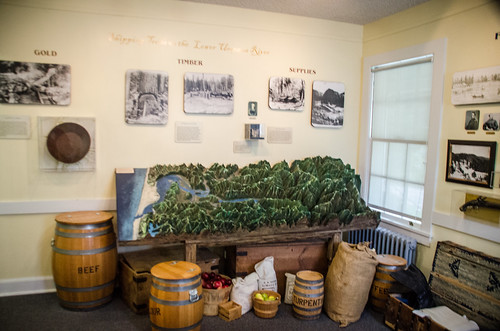 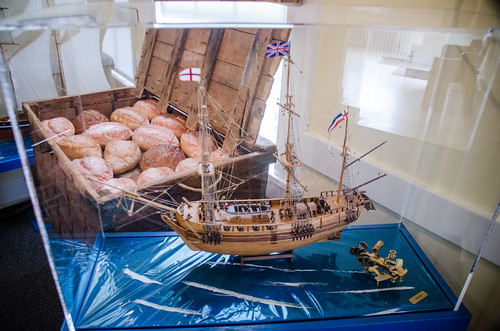 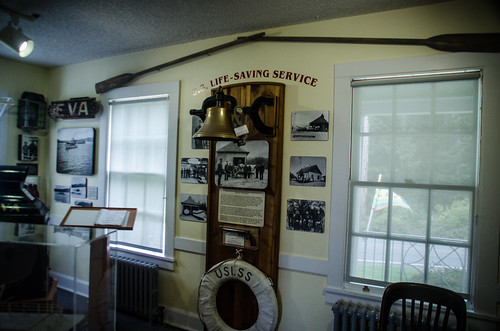 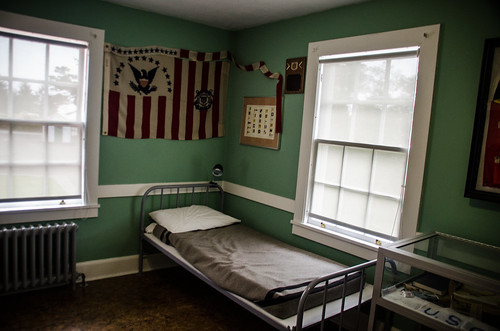 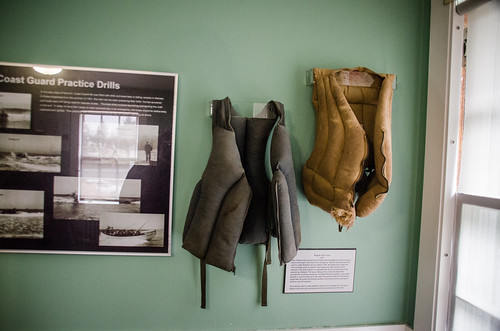 Our tour guide, Roger, was another RV’er who volunteer as he traveled around the country. He and Aunt Ellen had quite a bit in common, as she and Uncle Larry had similarly volunteered in their RV travels. He gave us a bit of the history of the area, and also describe the self-righting rescue boat on display next to the museum. 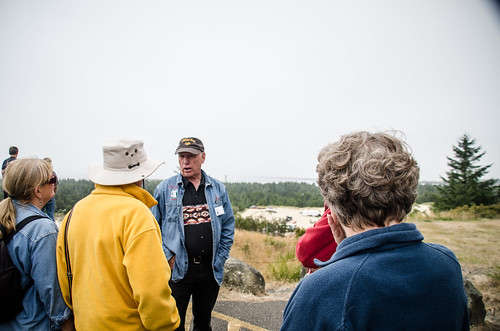 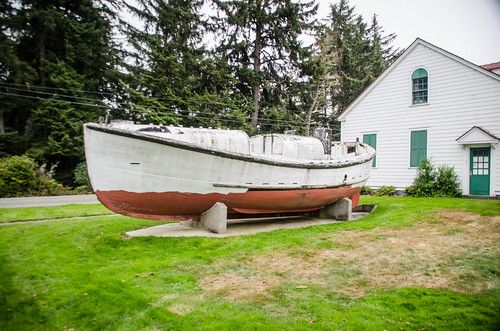 The lighthouse is still in active use, and this is still an active Coast Guard station. We were led past the barracks, then through the fence to the lighthouse proper. Roger described the architecture of the light, and how the tower structure was designed to act as a chimney so that it didn’t fill with soot from the original oil lamp. 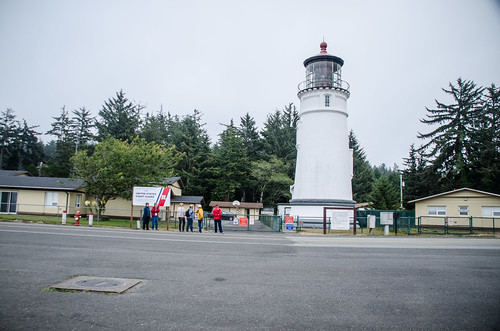 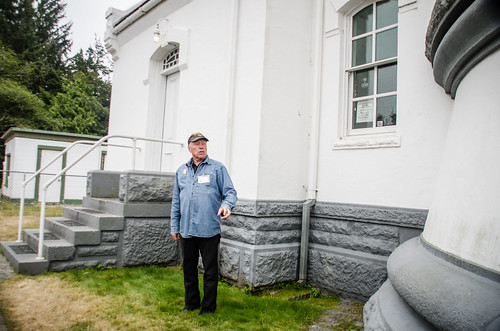 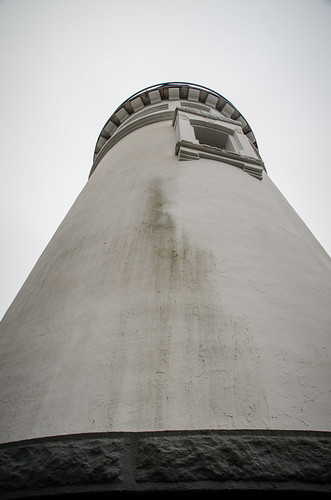 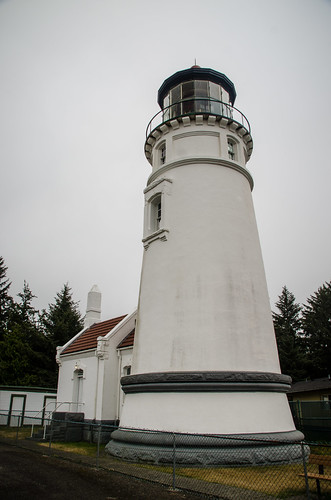 Inside we were given more info about the light. This one has a first order Fresnel lens, and has an alternating red and white pattern. A weighted chain was used originally to drive the clock mechanism. I took the obligatory spiral staircase shots, and pretty much the same shots I’d taken at Coquille Lighthouse yesterday. 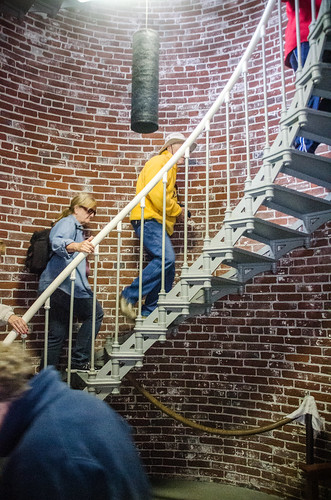 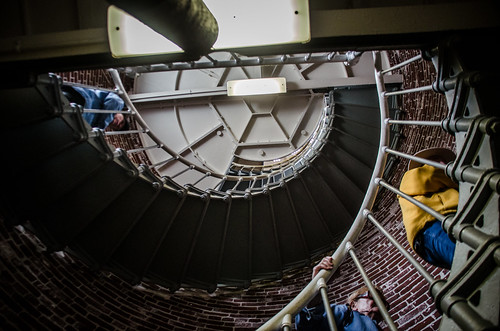 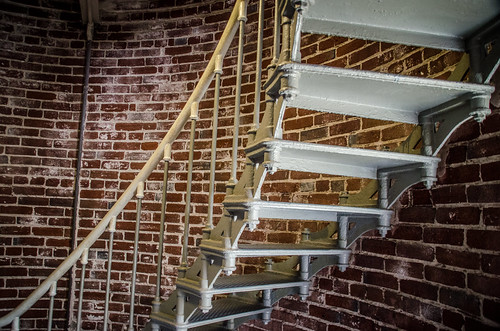 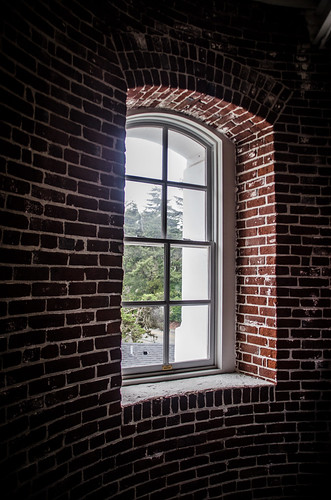 We couldn’t get all the way to the top as we could with yesterday’s lighthouse. However, we were allowed to poke out heads into the Fresnel Lens as it was rotating. Pretty spooky. 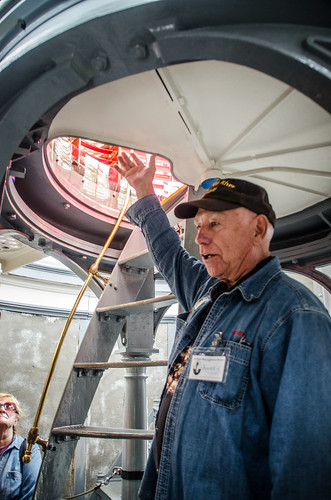 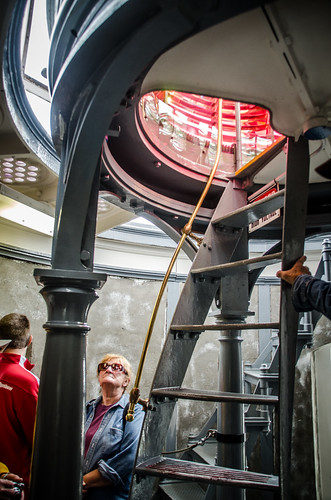 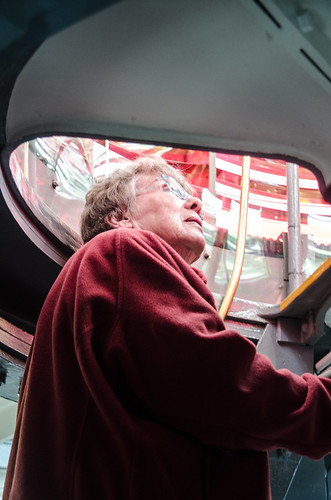 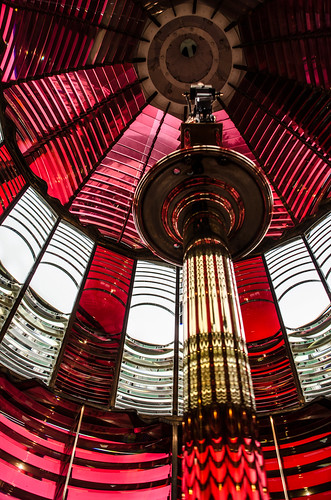 Laura managed to get a bit of video as the light was rotating.

We climbed back down, and another tour with a different volunteer took our place. We thanked Roger, then headed on back to the car.

Aunt Ellen wanted to have lunch at Winchester Bay, which was below the light house. However, when we drove down there we found the place overrun with off-roaders. There was no way we were going to get into a place for lunch here. We wound up driving all the way back to Coos Bay to find a burger joint near Aunt Ellen’s House. Afterwards, we returned to her place and just hung out with her for the afternoon.

Aunt Ellen was getting tired, so we reluctantly said our good-byes, and headed on back to the hotel. It was walking distance to downtown, so we set off in search of dinner. There seemed to be things going on – the town wasn’t dead. However, we couldn’t find anything that really appealed to us. We settled for Wendy’s salads, then turned in for the night.