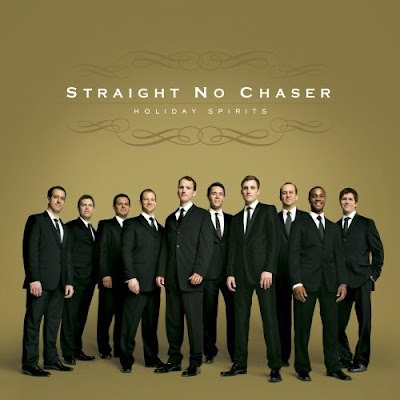 I love a capella and close harmonies, for just about any genre of music.  My co-worker, Rick, alerted me to a new group he’d heard on XM radio called Straight No Chaser that does some absolutely fantastic Christmas music.   I’ve been enjoying it quite a bit lately, much to Laura’s dismay.

Most of the group’s music is in a Do Wop a capella style, with a little bit of a beat box going on in the background.  SNC was formed in 1996 at Indiana University, and over the last 10 years have been doing very well, touring and recording.

Their name, of course, refers to the consumption of alcohol, and several of their songs and albums have that twist.  Their first Christmas album was entitled “Holiday Spirits” and the latest is “Christmas Cheers.”  There are several outstanding arrangements on the latest recording.  There is a a setting of “We Three Kings” set in 5/4 time with an underlying “Mission Impossible” motif.  It sounds quite cool.  One of my favorite songs is “Who Spiked the Eggnog?” and has an accompanying video.

Apparently the group gained most of its fame when a YouTube video of them went viral. I’m not sure which video that would be, but here is a recording of them in 1998 performing the “12 Days of Christmas”, in their own inimitable style.

Of course, with this discover, I’ve been searching for other a capella and beat box groups. Seems there’s no end of recordings on YouTube. While I’ve got some time off I may explore some of these other groups, too.