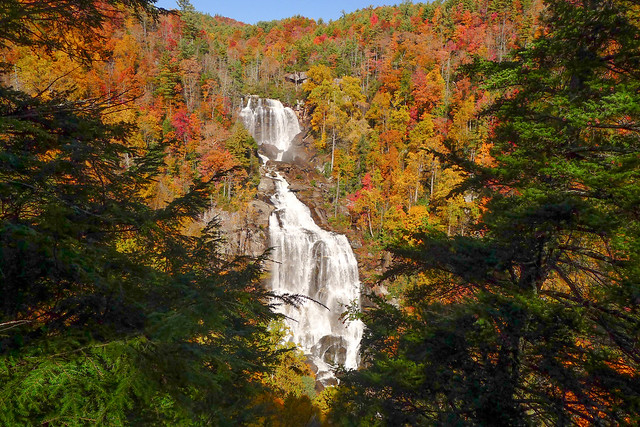 While out on my fall leaves ramble with Glynda yesterday I got a text message from friend Ken Cothran. He was out on his own color ramble, and sent me a photo of Whitewater Falls in spectacular foliage. So, on Friday I decided I hadn’t found quite enough leaves. I thought I’d see if I could replicate Ken’s photo, and find a few more colors.

I had a few iconic fall scenes I wanted to snag. Last year I had gotten some great shots of Table Rock from Lake Oolenoy. I didn’t have my kayak with me to get out onto the lake, but I did walk down to the fishing dock to get a couple of shots. I wasn’t to happy with the telephone wires that interfere with this view, though. 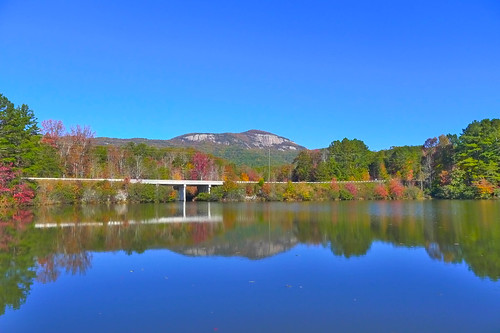 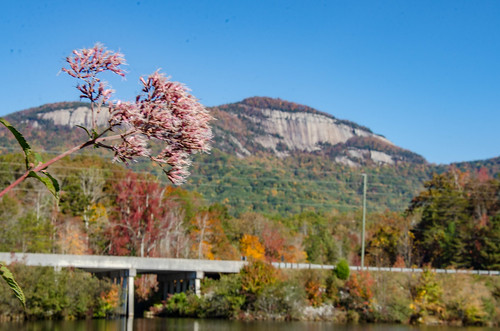 I drove back along Highway 11 until I reached another iconic view. This one is across a small open field with a stream flowing through it. 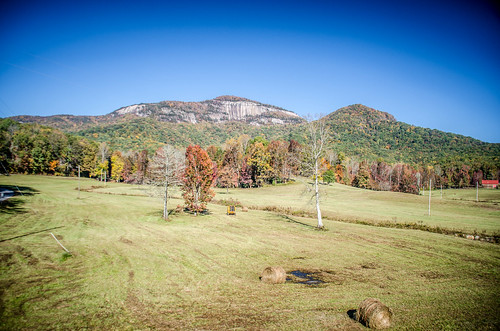 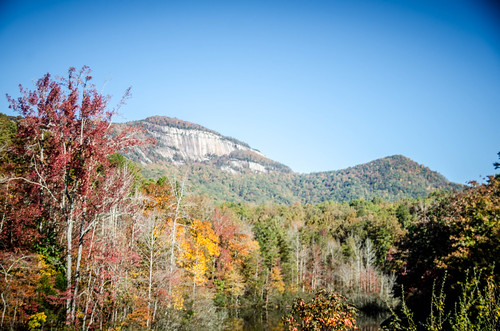 I continued on along Highway 11. The skies were crystal blue, and the colors were just incredible. I was running out of superlatives. My next stop was really up at Whitewater. Ken had told me that he was there at mid-day, and I was aiming to get there the same time had had been there. I turned from Highway 11 onto 130 toward Whitewater.

I had a couple of stops to make first, though. I pulled onto Wigginton Road and took a photo of Lake Jocassee from the overlook there. 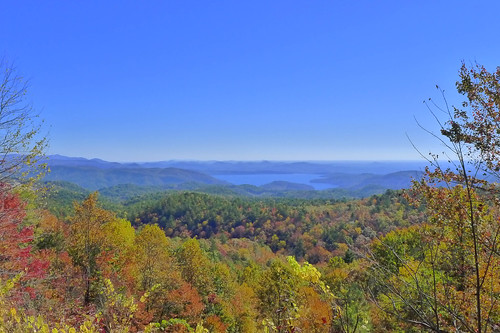 As I climbed higher the colors got even more intense. I pulled into the Bad Creek Project for more views of Lake Jocassee and the lower Whitewater falls. 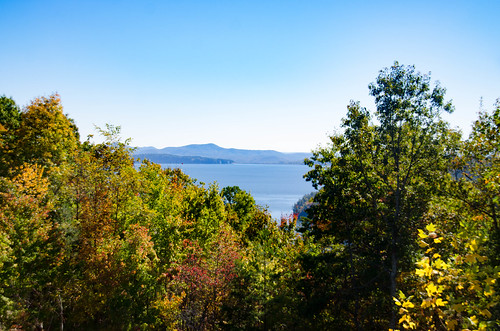 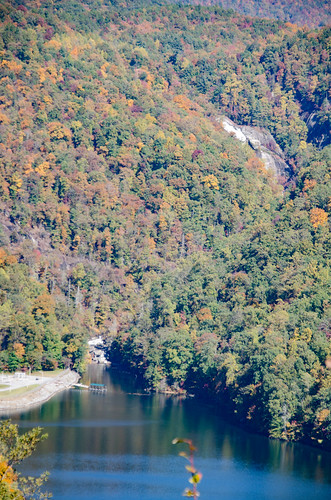 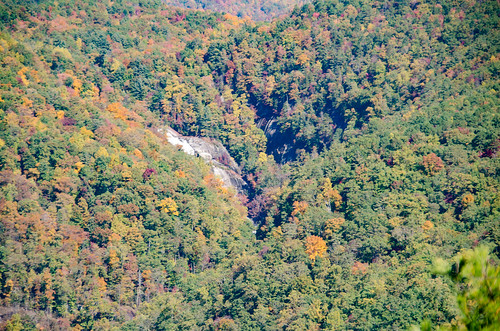 I continued on up to Whitewater and pulled into the parking lot. I grabbed cameras, lenses, and headed out. There were lots of other folks out to see the falls.

At the top the views were incredible enough. I snapped a couple of photos, and almost snapped at a looky-loo. I had just lined up a shot when a woman climbed over the barrier and stood right in front of me so she could get a shot with her iPad. I am by no means a scene-hogging photographer, but this really made me mad. I steamed for a bit, then asked, “Are you finished?” then got my shot. 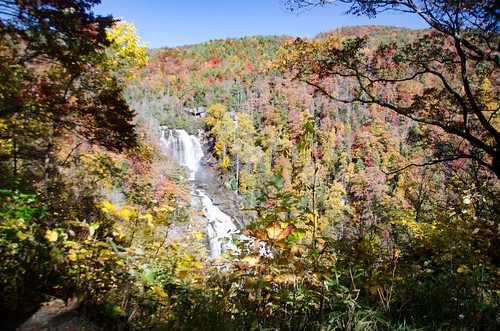 I was more mad at her behavior rather than any ruined shot, though. I knew that the better shot waste the viewing platform below. I climbed down the 150 steps to that view, and had it all to myself.

Ken was right. This was the perfect time of day for these falls. I’d been here in later afternoon, and the lower parts of the falls are cast in shadow. At noon they were fairly evenly lit. I broke out the tripod and took LOTS of photos. 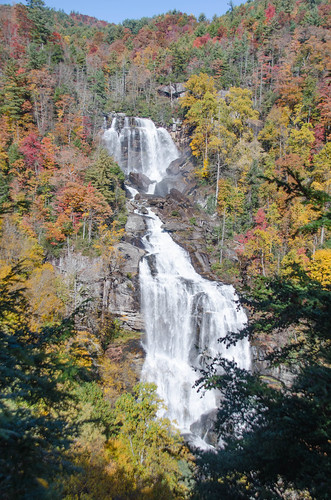 I thought I had brought my 35mm lens. I was going to use it with a neutral density filter to slow down the exposure time. Turns out I had my 50mm. Since the field of view was so narrow I shot in landscape instead of portrait. I shot five images at a longer exposure and stitched them together. I was pretty happy with the results. 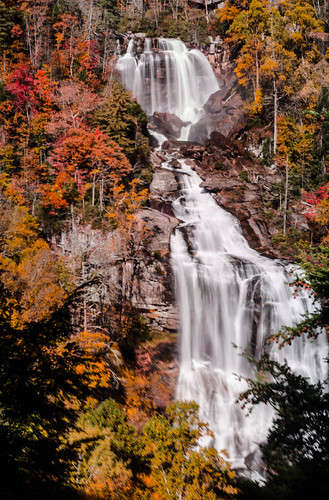 The filters were throwing off the color and white balance a bit, so I had to do quite a bit of correction. Here’s a shot in portrait mode with the 50mm lens and filter before I applied color correction. 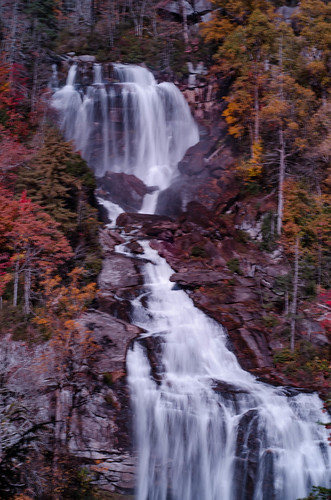 It was getting crowded, even down on the lower platform. I stepped back out of the way to let others get their shots. Some of the folks saw “big camera and tripod” and asked if I would take group photos with their cameras. I obliged, but I wound up taking photos of at least five groups with multiple cameras. Later Laura suggested that I charge $1 per person for each group.

I climbed back up the stairs, starting quickly at first. I had to stop for someone about 2/3 of the way up, and I immediately started gasping for breath. I was moving too quickly, and had to slow down. I think I could have made it all the way to the top at that pace before I started gasping.

A wild idea struck me. If the views were this spectacular from this side of Jocassee, then they must be equally good on the other side. I decided to try to find Jump Off Rock – not the one from yesterday, but another one. Yes, just like the one near Hendersonville this one involves a legend about some Indian maiden leaping to her demise over lost love. It’s amazing how many times that has supposedly happened across this part of the Blue Ridge.

I drove back down to Highway 11, then retraced my steps back to Highway 178. There I turned north toward Rocky Bottom. At Rocky Bottom I turned onto a narrow dirt track, and was thrown back in time.

In the early 1960s my dad was a camp counsellor at Rocky Bottom Campground. We came up for several summers. Back in the days before Lake Jocassee was built he took us on several drives through the area. One time we reached a rickety wooden bridge across the Horsepasture River. Dad made us all get out of the Pontiac and walk across the bridge. He didn’t trust it. He then gunned the engine and drove across as quickly as he could. Later, in the early 1970s we found ourselves on another twisting dirt road in this area. It was getting dark, and every time Dad asked how far it was to the main road, it was always “five miles.” It was the longest five miles I could ever remember.

Flash forward a couple of decades. My friend and co-conspirator Bob Donnan and I loaded up backpacks and set off along the very road which I was now driving. We hiked 8 miles along the Foothills Trail down to Laurel Fork Falls and camped at the top of them. The next day we hiked back out. Given my exhaustion just at the Whitewater Falls overlook, there is no way I could do that now. 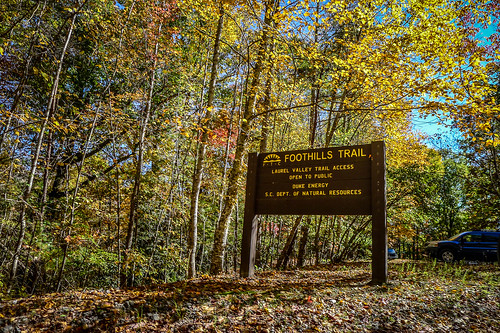 All these thoughts passed through my mind as I carefully drove along the rough dirt road, climbing up toward the ridge. I wasn’t alone, though. I passed several cars at wide spots. Another Subaru was in front of me. We stopped at a small waterfall, and chatted a bit. We decided to stick together as we drove up over the ridge. 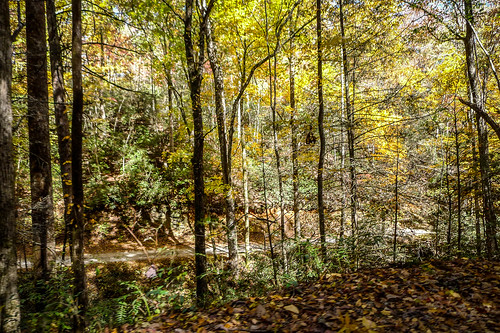 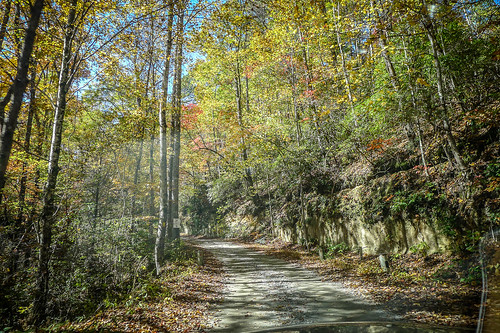 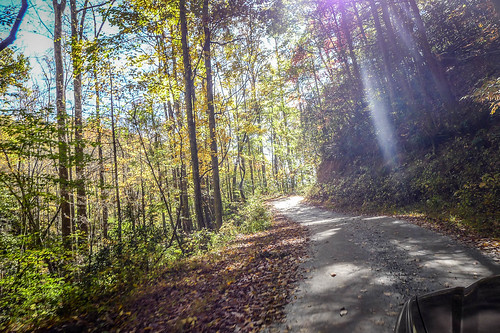 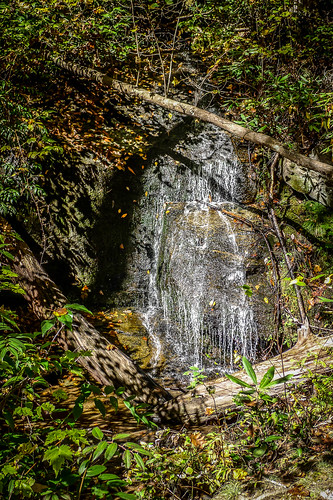 The road seemed to go on forever. I thought back to that “just another five miles” adventure. As we crested the ridge we had views out over the Horsepasture River Valley, with glimpses of Jocassee. 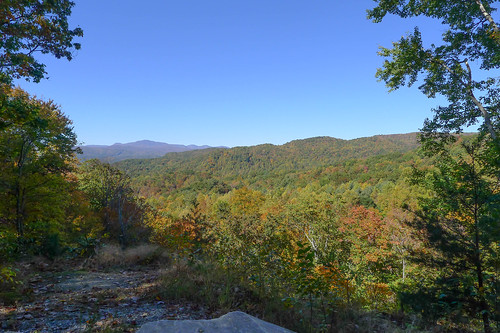 The road really was rough and treacherous. My car seemed to be handling it with no problem. 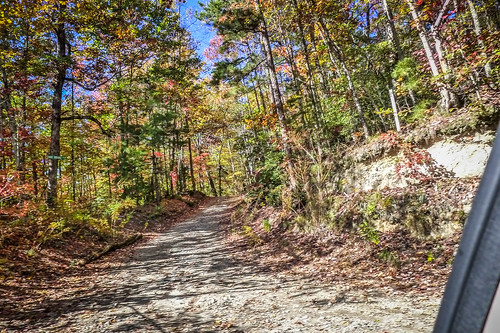 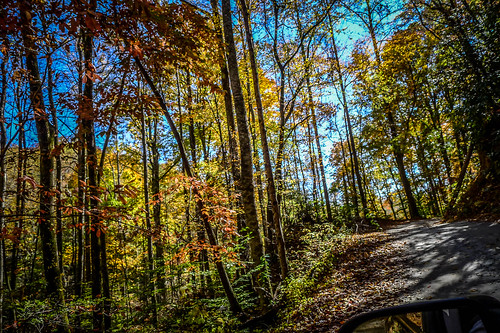 Eventually we made it to the top. There was a little parking area and a trail that lead out to the rock, proper. 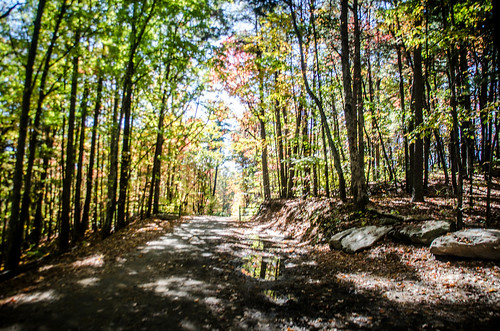 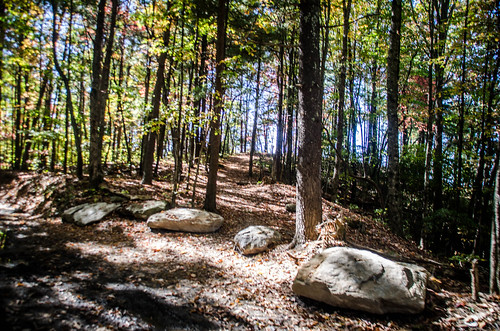 At the top was a monument to James Timmerman, Director of the Department of Natural Resources when Lake Jocassee was constructed. 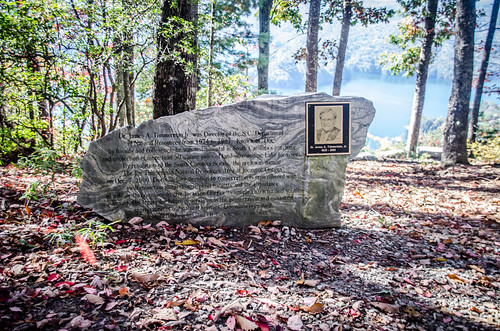 There was also a stone bench and sitting area, as well as the views of the lake which I had sought. My new friends in the other Subaru, Mike and Tree, enjoyed the view as well. Tree is an avid photographer, and had multiple cameras and tripod set up to get some images. 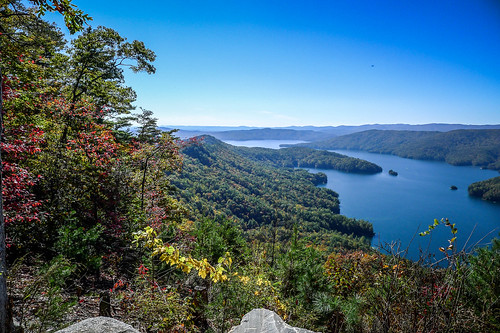 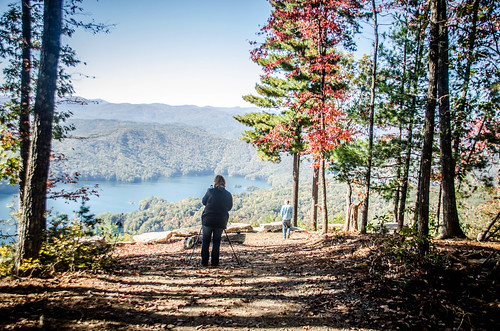 I lingered a bit, but it was getting later than I liked, and I still had an arduous drive back down the mountain. I said my goodbyes and set out. The drive back seemed to go more quickly, and soon I was out on true pavement and headed back home. It had been a spectacular day out in the autumn leaves. The forecast was for rain for the weekend, so I’m pretty sure I caught the last of these views for this year. 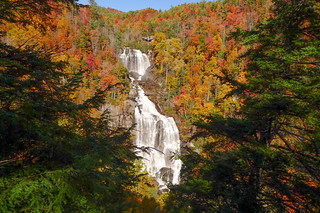