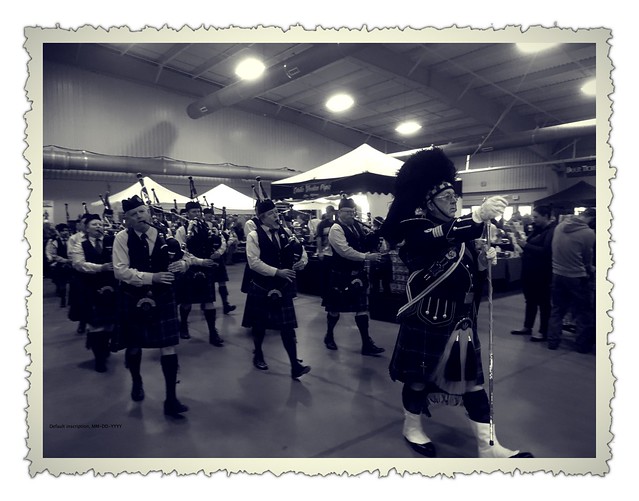 Since I no longer have a regular choir gig with rehearsals on Wednesday evenings I’ve been going to the Celtic jam sessions at the Stomping Grounds in Greer. I’ve been enjoying those so much that I’ve been looking for other outlets. So when I spotted that the Asheville Celtic Festival was happening, I knew I had to attend.

I bought my ticket ahead of time, saving a bit of money. On the appropriate day I drove up to the event venue, the WNC Agriculture Center in Arden. I was glad that I didn’t have to drive all the way up to Asheville. The event started at 10:00, and I got there about 10:30.

This is the first time for this event, and there were a few…rough edges. First off, those of us with advanced tickets had to wait in a long line, while those that were buying tickets at the door went right on in. That was NOT good, and they better fix that before next year.

I eventually made it inside the exhibit hall. The entire festival is indoors. There were vendors set up, with a place for performances in half of the space.

The Knoxville Pipe and Drum Corps had just gotten started. I couldn’t get a glimpse of them because of crowds, though. One thing I did appreciate was that I recognized almost all of the pipe tunes from all of the practice sessions I attended at the Littlefield Celtic Center in Mount Vernon. However, pipe bands were meant to be heard outside, preferably at a distance. When the band decided to march through the vendor booths and around the exhibit hall I found myself covering my ears and shirking away. I guess that was the original true intent of a pipe and drum corps, marching into battle.

With the pipe band tucked back in their boxes it was safe to wander around the vendors. One could purchase exotic pipes, various blades, tartans, steampunk boots, and just about any other item vaguely related to the British Isles.

Almost none of it felt authentic. I felt like I was in some sort of weird Celtic, Game of Thrones cosplay alternate universe. People had pieced together outfits they thought would be appropriate. I had the sense that someone visiting from Ireland or Scotland would feel the same as I might if I were to attend a festival in the British Isles where everyone dressed in their interpretation of Confederate Army attire. I freely admit that I’m a nerd and that I enjoy good displays of cosplay, but this just felt…weird.

Apart from the pipes and drums, the other music seemed equally inauthentic. The next group scheduled to play was a Celtic rock band. A more mellow trio was playing in the “cafe” but they didn’t sound anything like the traditional music I heard in Ireland, or in any of the sessions I’ve attended in the US.

There were some things outside. There was a forge demonstration. There were supposed to be Scottish games, and a sheep dog demonstration was about to get underway. Anyone could easily have watched these without having to pay the admission fee.

I walked through the vendors a couple more times, but soon lost interest. I’d seen everything of interest to me. If I was there a whole two hours I’d be surprised.

Reflecting on the Asheville Celtic Festival I thought of several things that I like about other festivals that were just missing from this one. The Grandfather Mountain Games and the Greenville Games have as much emphasis on the clans and Scottish heritage as on the fantasy aspects. Sure, dressing up in kilts with clan tartans is still cosplay, but there is a more established social aspect when you can identify with a clan. At the Asheville festival there was only one representative clan, Clan Gordon.

At the Skagit Valley Games in Washington there was more emphasis on traditional music. I attended several workshops in the music tent. It’s been a VERY long time since I’ve been to Grandfather Mountain, but in both Greenville and Washington they have piping competitions. The only thing I spotted in Asheville were the scheduled performers. There was one Celtic Jam scheduled for 2:30, but I didn’t want to hang around for that long. Even so, with everything in an enclosed space, having several different music activities would be problematic.

My complaints aside, this was the first year for the Asheville Celtic Festival. I’m hoping it does well, and that it evolves into a successful, more authentic representation of Scottish and Irish culture. However, the fantasy/cosplay aspect seems to be inescapable whether it’s Game of Thrones or Braveheart.

Having left the festival, I decided to head down to Hannah Flannagan’s Irish Pub in Hendersonville. I had a glass of Smithwick’s, but the regulars arguing over the television and wanting the station changed to NASCAR made lunch not quite as pleasant. I guess you could change from southern accents to an Irish brogue and substitute football (not the US kind) for NASCAR, and it would be the same. 😉