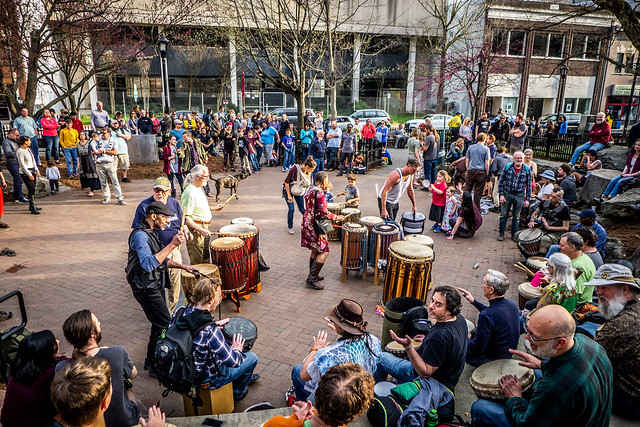 Ever since I started playing djembe I’ve heard about the Asheville Drum Circle. By the time I was thinking about heading up there last fall, they were shutting down for the winter. With the coming of warmer weather the circle is now back in full swing. This past Friday evening I finally had a chance to take part.

Laura has been teaching a lab course which keeps her occupied from early in the morning until evening as students try to finish experiments. She’s been coming home exhausted, and I knew she wouldn’t be up for the trek. When I told her that Glynda and I were headed to Asheville, she welcomed a chance to have the house to herself and to watch TV with supreme control over the remote. So, fairly early in the afternoon my sister and I made the trip up the mountain.

It seemed a bit crazy to be leaving the house at 3:00 for a 5:30 event. However, we timed it just about perfectly. Traffic was horrendous coming into Asheville. It always is. We were able to find the perfect parking spot in the Wall Street Garage with street level access. Since we had time we were able to explore the Grove Arcade and some of the shops in the area.

We got an early dinner at Early Girl Cafe on Wall Street, which had a view out over Pritchard Park. As we ate we watched as the drummers gather.

After our meal Glynda headed on down to the park and I went back to the car to retrieve my drum. When I got down to the park I found that Glynda had snagged a perfect spot, and that there were spaces reserved for drummers. I took a seat on the upper row, on the fringes of the main action, and Glynda grabbed my camera for a few shots. The rest of these photos are a combination taken by both of us..

The guy sitting next to me introduced himself as Glen, a long-time drummer with the group. He welcomed me, and we jumped right into the rhythms.

On one of our kayaking trips I’d asked Jeff Holland about the Asheville Circle. He said that they don’t have a facilitator, as such, so it can be a real free-for-all. Yet, there was a dun dun section up front setting tempo and style.

Sometimes spontaneity can be fun, but sometimes chaotic. I witnessed both types. The rhythms are usually duple, but at one point the beat mutated into a triplet rhythm. I kind of liked it, but I saw others raising their hands and asking, “Where’s the beat?” Here’s an audio sample from that rhythm:

On the chaotic side, Glenn said that some of the regulars weren’t there to keep things on track, so the beats were getting a bit squirrely. There was some other odd behavior, too. One young dude who was obviously quite drunk came up and wanted to play. He kept messing with people’s drums and trying to take the sticks away from the dun dun players. When rebuffed he got kind of hostile. At one point someone gave him some sticks just to shut him up.

There were dancers, hula-hoopers, and various other free spirits. These didn’t strike me as odd or out of place, but perfectly natural in this setting.

There was a group of young women that Glynda said was part of a bachelorette party. They were dancing, hula-hooping, and even tried the dun duns. One old guy who may or may not have been intoxicated was having a great time dancing. He was particularly interested in dancing with the bachelorettes.

I counted thirty drummers while I was there. There was a huge group of on-lookers. Over the course of time I drummed there was a constant turnover of drummers, coming and going. One thing I noticed, though, was that I really needed to spruce up my drum circle attire.

Despite the occasional drunk, it was a fun, family-friendly event. Glynda and I stayed until 7:00. She even agreed to take a turn with the djembe before we headed out.

It was a great evening and I’m glad we went. I’ve got several concerts and kayaking trips coming up, so it will be awhile before I can get back up to Asheville for the drum circle. It will be interesting to see how crazy this gets at the height of tourist season.