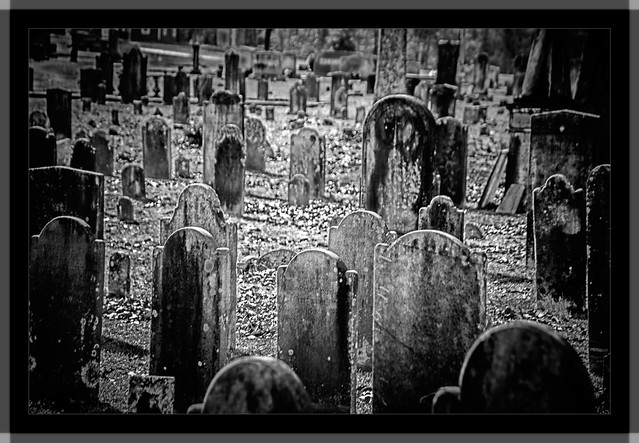 Each year Alan Russell and I do an exploration on the Matin Luther King holiday. This got to be a tradition because both of us were available on a day when we didn’t have family obligations, etc. This is the first year since Alan has been retired, so this time he DID have MLK Day obligations, so we took our trek on Tuesday instead of Monday. For this year’s exploration we decided to explore the Waxhaws section of North and South Carolina.

The Waxhaw region straddles the North Carolina-South Carolina line southeast of Charlotte. Named for a tribe from the Catawba nation, the original inhabitants died from diseases brought by European settlers, or were killed off in the 1715 Yemassee War. In the mid-1700s Scots-Irish settlers came to the area, founding the Old Waxhaw Presbyterian Church. Several Revolutionary War battles were fought in the region, and Andrew Jackson was born here. Neither Alan nor I had ever visited, so it seemed ripe for exploration.

The NC-SC border through the region was disputed for a long time. Andrew Jackson claimed to have been born in South Carolina, but others have argued that he was born in North Carolina. Both states have stone monuments commemorating his birth. The South Carolina region forms an unusual wedge bounded by the state line and the Catawba River. The 1825 Robert Mills atlas shows some of the prominent features of the area post-Revolution, and places the Jackson birthplace in South Carolina. 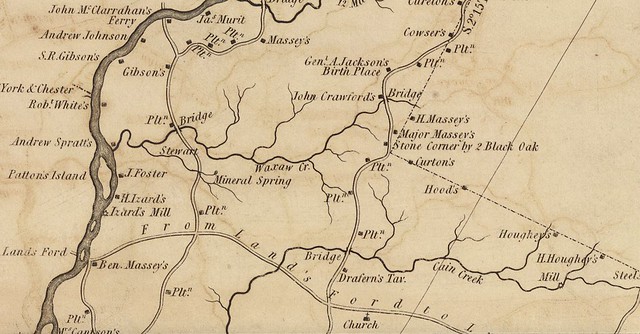 We left fairly early, with a stop by Stax Omega for breakfast.

From there we headed straight on up I-85 through grueling traffic. We skirted the south side of Charlotte, then continued southwest toward the town of Waxhaws. I’d noticed on previous trips that just about anywhere within a 30 mile radius of Charlotte has become subsumed into the city. Whole towns have become bedroom communities. Village centers with condominiums have replaced farmland. As we approached the town of Waxhaw we saw that a large group of condos was being built right up to the town’s historic main street area. This photo from Google Earth is actually behind the times. 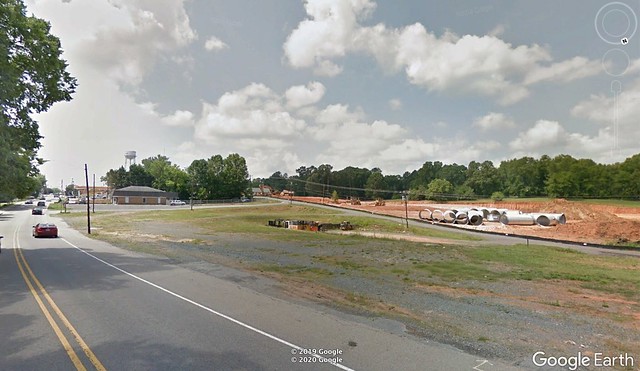 Even though the town is part of a National Register Historic Region, we didn’t stop. We drop through the town, which looked like it had some neat shops and restaurants, but just didn’t feel the urge to get out and walk.

There was a Museum of the Waxhaws nearby, but it was only open on Saturdays. Alan also mentioned that JAARS was nearby, originally known as the Jungle Aviation and Radio Service. JAARS formed as an independent organization to support Wycliffe Bible Translators in their effort to distribute translations of the Bible worldwide.

Museum of the Alphabet

Across from the JAARS headquarters were two museums. The Museum of the Alphabet was open and caught our attention.

We were greeted by two hosts and encouraged to join several other visitors for a portrayal of the Wycliffe founder, William Townshend, by one of the hosts. We sat and listened for a bit.

The first display was a sculpture of the Tower of Babel, the purported source of all languages.

Our host offered to give us a tour but seemed somewhat…zealous. We were afraid we wouldn’t get out in a timely fashion to do the rest of our exploration. At least, not without a profession of faith and/or conversion.

Combined with the biblical nature of the first display, we wondered what we might find inside. We were pleasantly surprised to see a very scholarly exhibit documenting the evolution of languages and alphabets.

After spending more time than we intended, we left the Museum of the Alphabet in search of our next target. Both of us had made a note of the nearby Pleasant Grove Camp meeting, so we set off in that direction.

2 thoughts on “A Wedge of Waxhaws”