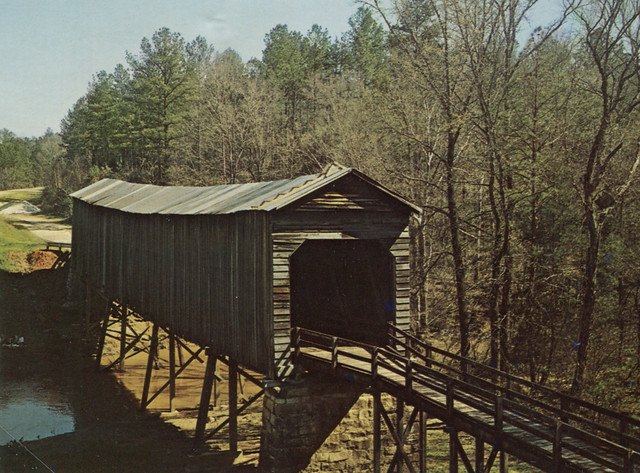 This was going to be a very different post. I was about to explode with righteous indignation about the theft of yet another photo. And while the photo theft did take place, it was a different photo and my culprit turned out to be…me. It was an interesting rabbit hole of research that led me to an unknown (to me) photographer and an appreciation for his work.

It all started when I came across this post by Beth Salley Traynham on the South Carolina Picture Project Facebook page about the old Long Cane Creek Covered Bridge in McCormick County that burned in 1979:

I spotted it right away as a photo I had on my Flickr stream, but with some differences. The color was off a bit, and there was a wavy border at the bottom, but other than that they were identical. 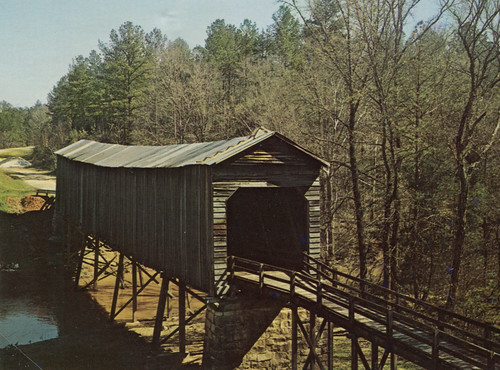 Let me be clear – I didn’t think that Beth Traynham had stolen the photo. She had not claimed it as her own, which would have really ticked me off. I figured she had found it on Google somewhere and reposted it without citing the source. I was after the original culprit – the one who had altered my image. I posted a comment simply asking if she knew the source of the photo. I had to be sure before I posted anything else, so I did some tests.

First about the photo in question…

My brother Houston had taken some photos of the bridge in the mid 1970s. He had done one of them in sepia which I scanned. Back in 2011 I was experimenting with creating fake 3D analyphs from a single image. I converted a couple of these using that process and uploaded them to my Flickr account. I converted the disputed photo to black and white before rendering it in 3D. If you’ve got a set of red-blue 3D glasses you can get the full effect. 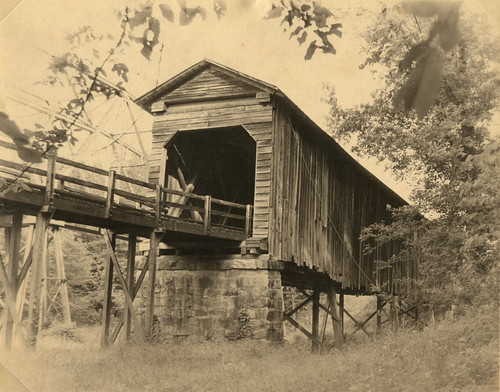 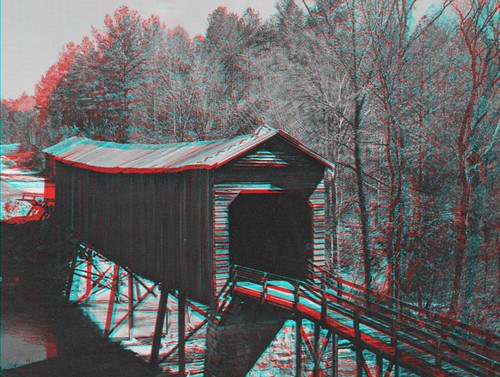 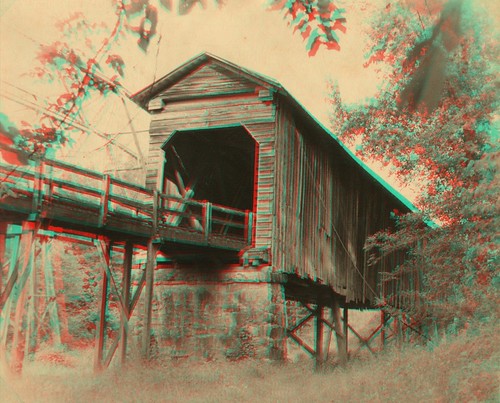 There were enough differences between the Facebook post and my image that I had to be sure. I didn’t want someone to just say that it was a photo taken from the same vantage point. I loaded both into Photoshop so that I could do a side-by-side comparison.

They were pretty damn close but there was some parallax distortion. I went a step further and overlaid one layer on top of the other. It was an exact match, down to the shadows and leaves on the trees. The photos were identical. We had a problem.

At this point I still hadn’t heard back from Beth about the source of the photograph she posted. I started to do my own research. I started with Flickr. This is where I ran into a whole new set of problems. When I did a search for “Long Cane Creek Covered Bridge” the results returned my photos, as well as a couple labeled “Scene of Yesteryear #9” by Flicker user “JustMeSKJ ~ Postcards.” 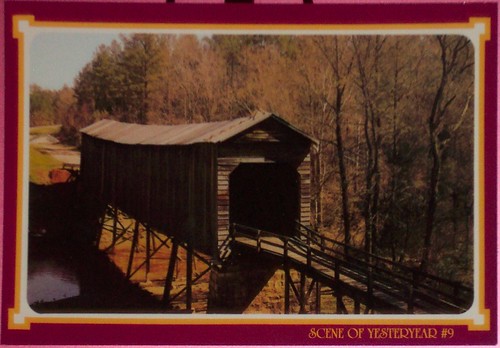 This was a completely different alteration of the bridge photo, but it obviously came from the same source. The user left the EXIF data visible, and it showed that this was a photo of a photo, taken by a Kodak LS443 Camera on July 7, 2008. The EXIF data for MY photo showed that it was created on March 26, 2011, three years after this guy took his photo. So, unless he has a time machine, Flickr user JustMeSKJ did not steal my photo. I was having some serious doubts about my assumptions about this photo.

I did a Google Image Search based on my photo and it returned multiple hits. Most of these came from Pinterest (in my opinion, the root of all evil on the Internet.) Many of the hits had the word “postcard” associated with it. I found one of these on eBay and was able to get the information off the back of the postcard. 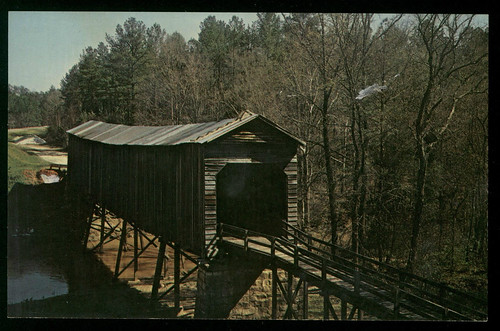 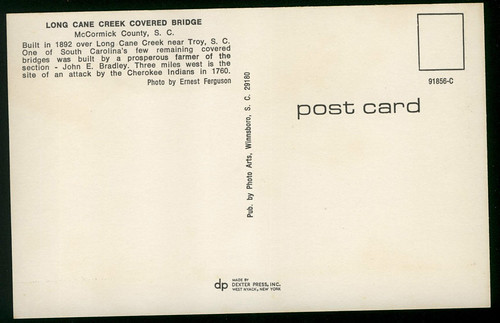 The back says that the photo was taken by Ernest Ferguson. Had he swiped Houston’s photo?? These postcards seemed to be the source of all of the duplicates. Now that I had a name, I had to find out more about this guy.

Turns out there was quite a bit of info about Ernest Ferguson. He was a prominent photographer who lived in Winnsboro. He published postcards through his company, Photo Arts, Inc. These often pop up on eBay, and are even included in several library collections, including one at the Spartanburg County Library. Ferguson passed away last year (2016) at the age of 92. Here’s an interview for SCETV’s Palmetto Scene with him discussing antique cameras.

This hardly seemed like a guy who would steal a photograph.

At the start of all this I had sent an e-mail to Houston asking about the photo. He had damaged his phone, so he couldn’t respond to text or a phone call. The response came long after I’d made these discoveries about Ferguson and the postcards. Houston confirmed that the sepia photo was his, but as for the disputed photo, he didn’t recognize it. It wasn’t his. Furthermore, Houston said that he only had black and white film loaded in his camera that day, so this color photo couldn’t be his.

So where did it come from? Why had I attributed it to Houston? My only guess is that when I was doing my 3D anaglyphs I thought I needed another photo of the bridge and found this one online. Somehow I had tagged both as belonging to Houston. I was the one at fault.

I had learned about a new photographer, Ernest Ferguson, and I want to explore his work further. It looks like he has some fascinating historical images. I hate that I had mis-attributed his photograph, since I’m usually such a stickler for these things.

As for Beth Salley Traynham? We had a great discussion on Facebook about this. Beth had taken a photo of a postcard that had been in her dad’s collection. Since it was her photograph (of a photo) she had not felt the need to cite a source, which makes sense to me. That’s why she hadn’t responded immediately when I asked about the source of the photo. However, she added another layer of mystery. Beth had this to add about the information on the back of the card:

I’m convinced the photo was by Ferguson. There is a possibility that Williams worked for Photo Arts, Inc and actually took the photo, for which Ferguson took credit. That’s just speculation, though. I haven’t been able to find anything else about Williams.

I may have been the unwitting culprit in this case, but that doesn’t mean there wasn’t a theft of one of my photos…

As I was searching through Pinterest (the root of all evil on the Internet), I came across this image: 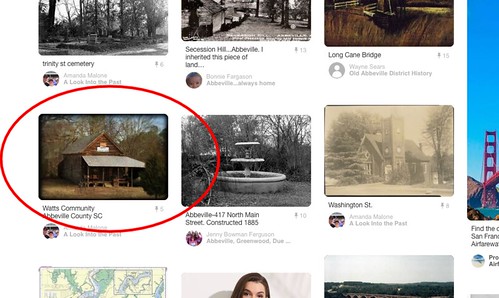 I immediately recognized it as mine. The direct link from Pinterest didn’t give me any clue as to the identity of the thief. They had substantially altered the photo, running it through some filter, but it is the same.

Here’s the link to my original photo: 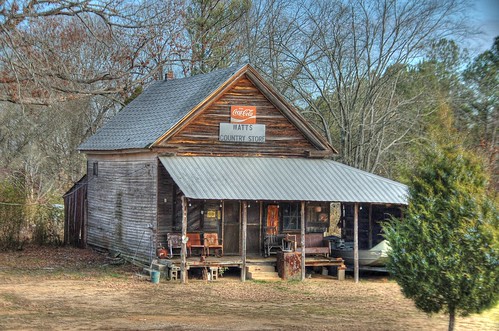 Oh well. I guess you can’t win them all. 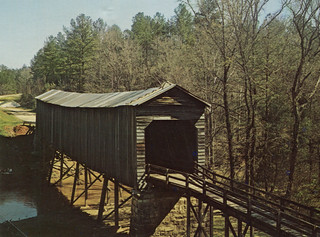