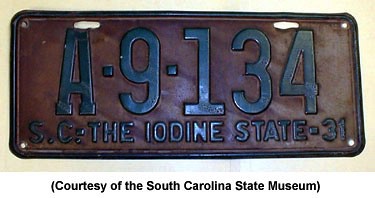 At dinner tonight Bill Pennington told us of his latest acquisition – a 1933 South Carolina license plate he found on eBay. What made this interesting to him was the phrase "S.C.-The Iodine State."

Bill is a chemistry professor at Clemson who works with iodine compounds, so the subject is of inherent interest. His wife, Wendy, has worked to help develop the South Carolina National Heritage and Discovery Corridor, the interest in history is there.

From 1930 – 1933 something with the word "iodine" appeared on the license plate. It was one of the earliest examples of a motto being placed on a plate, and was a part of a marketing strategy by the agricultural commission. It seems that South Carolina’s vegitation is rich in iodine. The idea was to market the state’s vegetables to states in the mid-west because of this addition. Unfortunately, the Morton Company in Michigan started adding iodine to their salt, effectively killing South Carolina’s plans.

In addition to the license plates, there are other remnants of this campaign. WIS-TV in Columbia took the letters to stand for "Wonderful Iodine State" when it was first getting started as a radio station.

The things you learn when you dine with chemists. 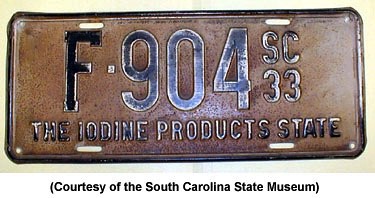