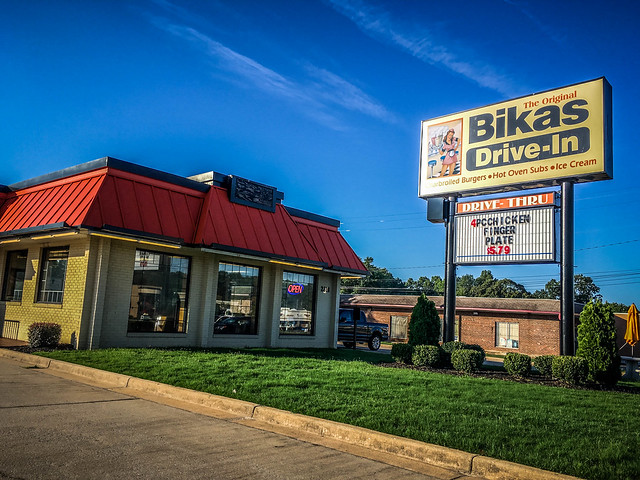 Laura was away for a faculty retreat at Furman. I decided I would check out a couple of new spots for breakfast. I hit two home runs, first with Bika’s Drive-In on Wade Hampton on Wednesday, then again with O. J.’s Diner on Pendleton Street on Thursday. I had two great breakfasts on two consecutive days.

I’m not going to use my normal format for reviewing restaurants. I only experienced these places for breakfast, and it looks like these places have extensive lunch and dinner menus. I’ve heard from others that their other food is also quite good. I want to come back to each of them at a later date.

The original Bika’s is on SC 253 in the City View area of town. This location opened in an old KFC on Wade Hampton. A couple of other restaurants tried to make a go of it when the KFC closed, but didn’t make it. One Italian place lasted longer than the others.

Initially there really hadn’t been anything to attract me to Bika’s. It was just one of the many mom and pop drive-ins all around town. The other day, though, I spotted this sign: 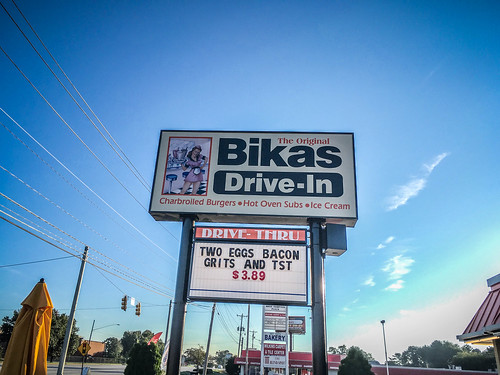 That looked like a fantastic price for breakfast, so I decided to check them out at my earliest opportunity.

I had a kayaking trip scheduled with Bennie Waddle, but we weren’t meeting until 9:30. Since Laura had to leave early for her retreat, I decided I had plenty of time for breakfast. I almost made a tactical error, though. I left right as school was taking in, and the 2nd day of school traffic was pretty bad. I made it, though, and found Bika’s to be not overly crowded. 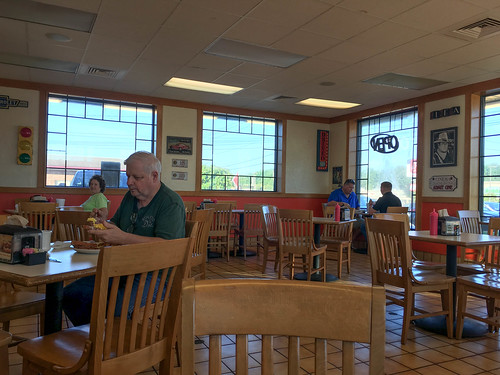 As with Campobella Italian before them, Bika’s can’t quite escape the old KFC architecture, but they make the most of it.

One orders from the counter. I found the menu boards a bit difficult to read, especially under pressure. I think my uneasiness showed. The girl behind the counter asked if I were in a hurry. I hated to tell her that I just felt a bit rushed because they had such an extensive breakfast menu. I made some lame excuse about having a paddling appointment, but I think she took that the wrong way. 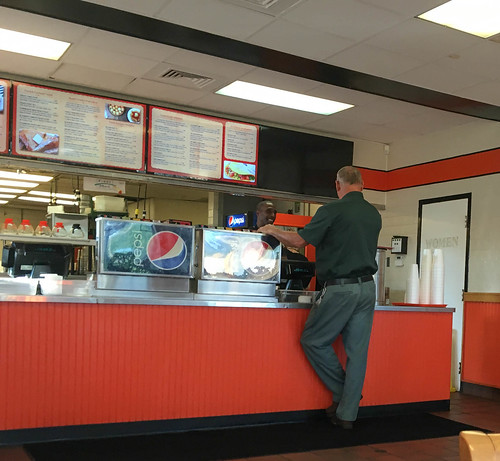 In the end I stuck with what I’d seen on the sign, plus a cup of coffee. Total damage came to little over $5. Not too bad. I took a seat, and my food arrived rather quickly. 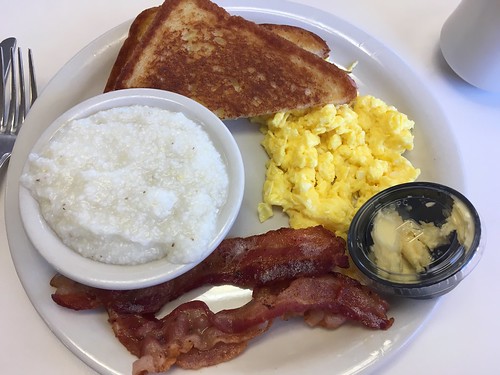 The food was good and well-seasoned. I was even willing to forgive them for serving the grits in a bowl instead of on the plate where they should be.

The waitress came over and asked a follow-up about my “paddling appointment.” I clarified, much to her relief, and she said she and her boyfriend wanted to try kayaking. We chatted a bit, and I gave her one of my cards. Another patron sitting nearby joined in the conversation. It was quite a friendly place.

…and that was the overall vibe I got. Two guys from the kitchen, one of whom I assume to be either an owner or manager, also greeted me and asked how things were going. So far I really like the place, and I think I will be back.

One last note – I checked in on Facebook, and I got comments from several of my friends raving about their burgers. I didn’t see a menu for later meals, but I’ll have to try them sometime.

Thursday morning my plans changed several times. Originally I was going to get up early and do some photography. I overslept. Second choice was to find another cool place for breakfast. I had passed by the Happy Biscuit near the village of West Greenville, and it looked interesting. However, when I drove by I found it closed with a real estate sign out front. Oh well. 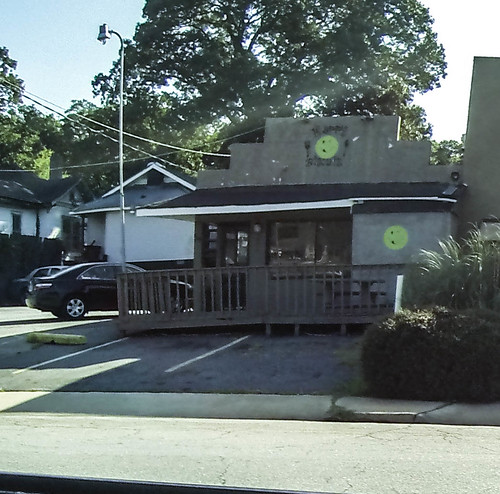 I had to go with a Plan B (or Plan C by this point.) I drove along Pendleton Street back toward town. Just past Academy Street I spotted OJ’s. The parking lot was crowded, which was a good sign. Speaking of signs, the marquee read, “Come in and make a friend.” How could I refuse? 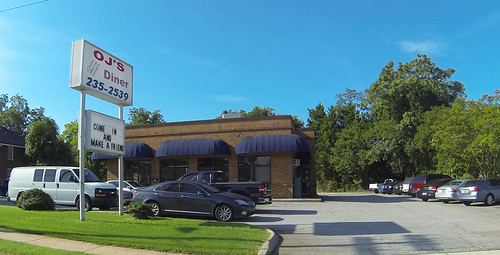 One enters, takes a tray, and is served from the line. The concept is “meat-n-2” for breakfast, a meat and two sides, with bread included. I got bacon, and my two sides were cheese grits and eggs. A biscuit rounded out the meal. Coffee was also included, so the whole deal with tax was just a shade over $5. 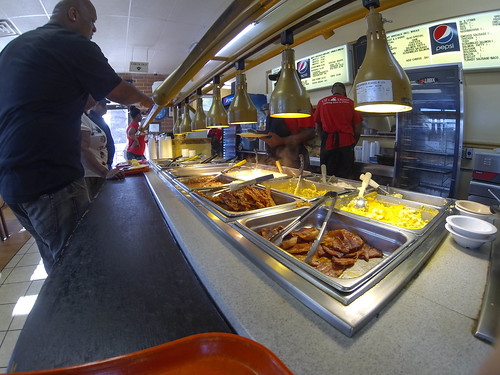 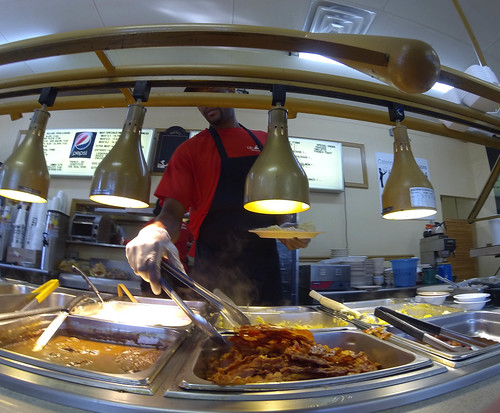 The place was crowded, but I found an unoccupied booth. The clientele was working class and predominantly African American. A long table next to me was taken over by members of some college fraternity, all of the men in their sixties. They apparently gathered on a regular basis. 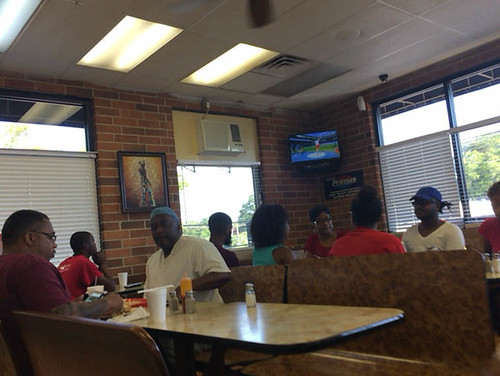 As for the food, it was excellent. I especially liked the cheese grits. Everything was seasoned nicely.

There were some other items on the serving line that seemed unusual for breakfast. There was rice, and some sort of meat (cube steak?) with a dark gravy. There were salmon patties, and a salmon crumble that could have been had instead of bacon. Smoked sausage and sausage patties were also available.

For lunch and dinner a meat-n-3 is available. Bennie Waddell had commented that they serve turkey and dressing on Tuesdays, and that the line can wrap around the building. I bet it is tasty, and I do want to come back for another meal.

So, two excellent breakfasts, in to completely different venues. These two successes made me want to check out other mom and pop places. This has inspired me, and I may have to do a weekly breakfast exploration. No promises, though. I’m not sure my waistline can take it. 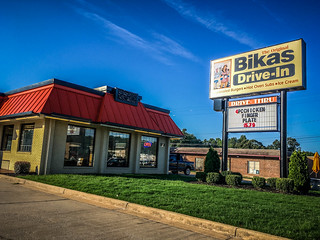 2 thoughts on “Two for Breakfast”