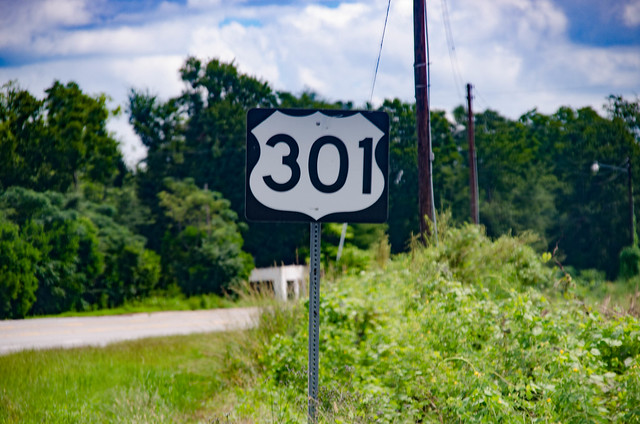 It was time to explore Highway 301. I had done the preliminary research and discovered the importance of The Tobacco Trail as a major route through South Carolina. I was ready to get out and actually take photos of some of these locations. However, I still had a bit of research to do.

The first thing I did was begin collecting old postcards and images from eBay and other sources. This would give me a comparison of what had been with what I would find. The next step was to mark potential locations in Google Earth. I traced the route of 301 through the state, marking motel and other locations as I spotted them. I also added any National Register or other interesting sites I found along the way. These were then uploaded to my GPS so I’d have them for ready reference.

I would have loved to have done all of 301 in one go, possibly staying in one of the old motels still open as I took a few days to explore. That wasn’t possible this time, though. There were crises on both sides of our family, including an elderly uncle at the point of death. I would only have a few hours of exploration, at best. I could only do a short segment of 301.

I’ve already written about the trip down and the distractions faced along the way. I didn’t make it to the Highway 301 bridge on the Savannah River until 11:00 am. The day was already flying past.

I reached the Georgia-South Carolina border, but decided that I needed to check out the other side. I drove into Screven County where I came to the Georgia Welcome Center. 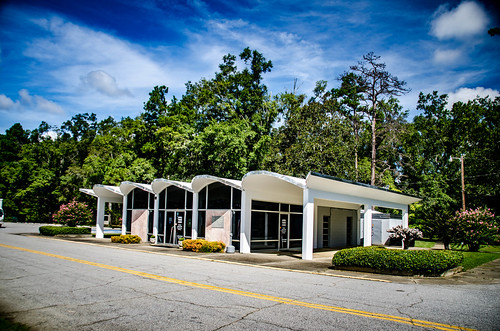 The welcome center was open, so I pulled in. A woman named Ann was working the counter, and was happy to give me information about the center. According to her, this is the oldest welcome center still in operation in the US. It was built in 1960, designed by Edwin Eckles in the style of Modernism. The scalloped roof is lined with aluminum, and concrete, glass, and Terrazo tiles make up the rest of the construction. 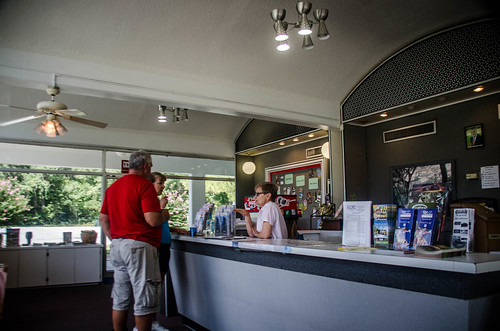 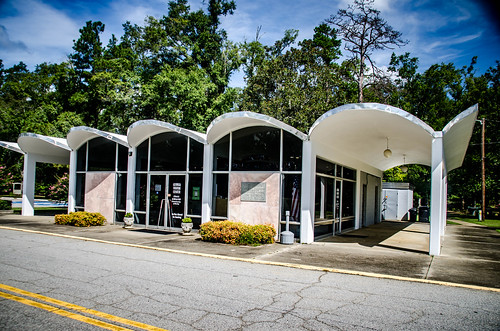 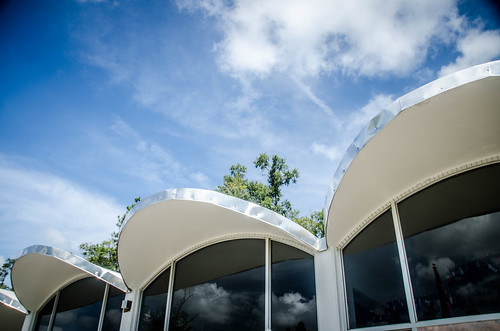 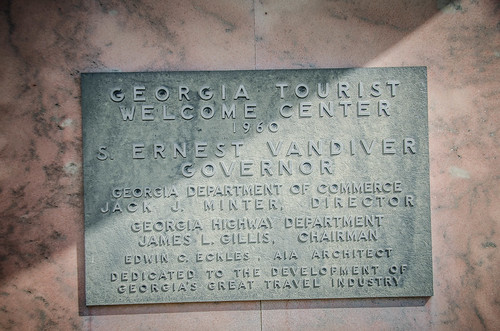 Ann said that the sign out front was the original from when the center opened. There was also a Georgia-shaped monument with the words “Georgia Welcomes You” inscribed thereon. Ann said that the monument was from Elberton granite, but that the Terrazo had to be imported. 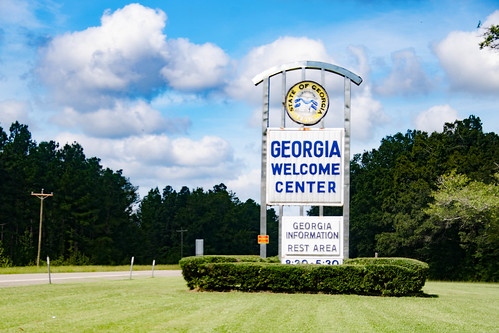 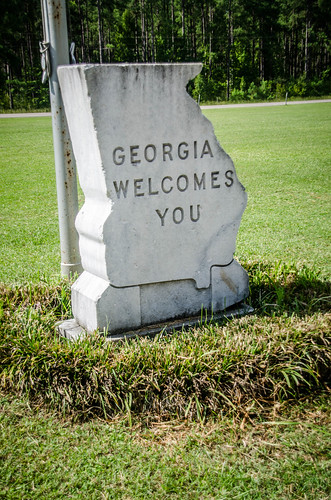 The center has all the things you would expect to find at any welcome center along an interstate – rest rooms, picnic areas, and printed matter relating to Georgia tourism.

From the Georgia Welcome Center I headed back crossing the Burton’s Ferry Bridge. I had given a bit of its history when writing up our Savannah River Trip that began at this point. The original bridge was built in 1938 to coincide with construction of 301. It is a turnstile bridge that could rotate to allow barge traffic between Savannah and Augusta. 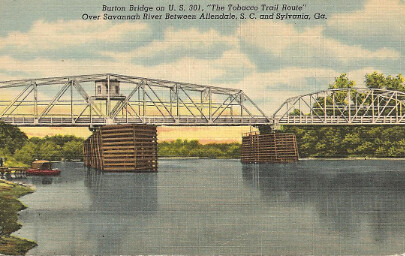 In 1965 the highway was re-routed and a new bridge built over the river. On our trip I had a chance to paddle under both new and old bridges to check them out. 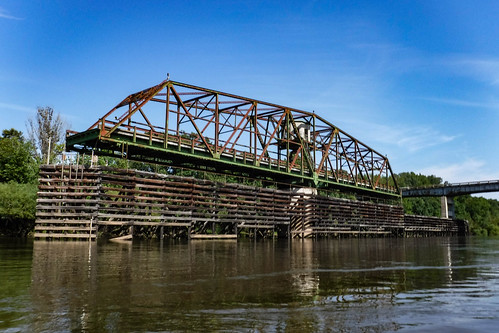 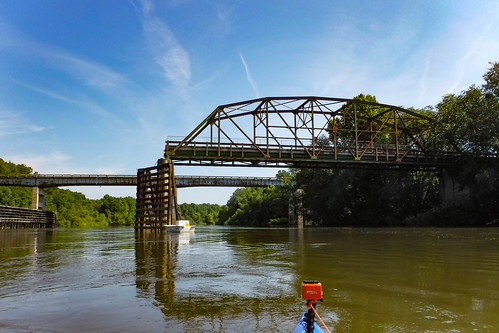 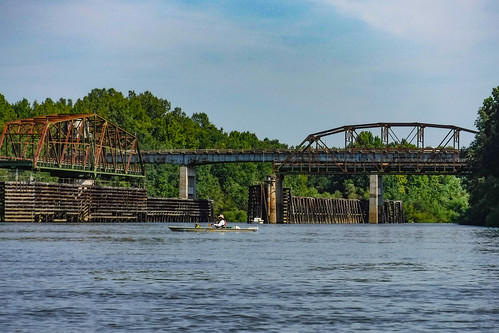 As I crossed the new bridge back into South Carolina I noticed a dirt road turning right, and running down to the river under the bridge. I had to check it out. 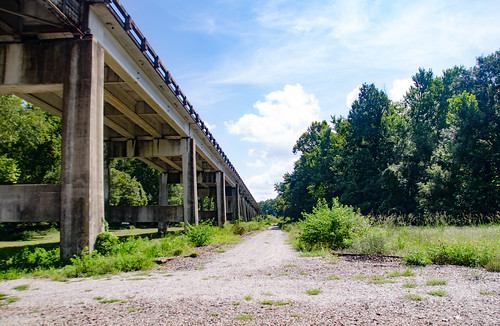 The road runs down to a short concrete fishing pier on the eastern bank of the river. There isn’t a launch spot, like the boat landing on the other side. I was actually between the old an new bridges, and I could see supports for the old bridge to my left. 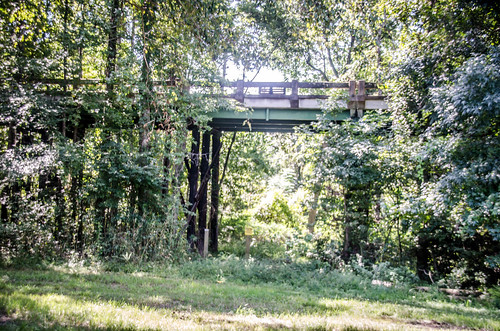 The fishing pier provided views of the bridges and river from the South Carolina side. 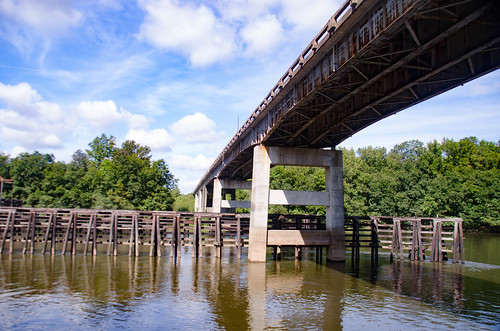 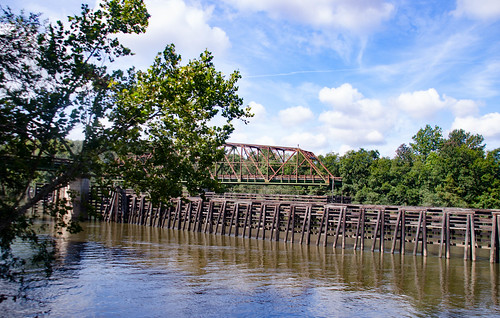 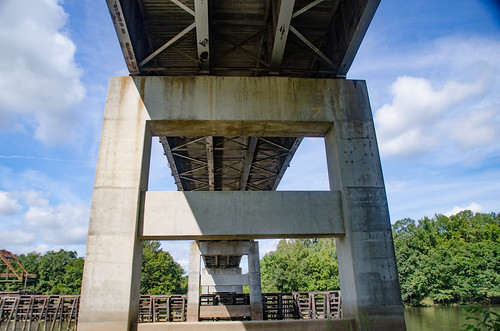 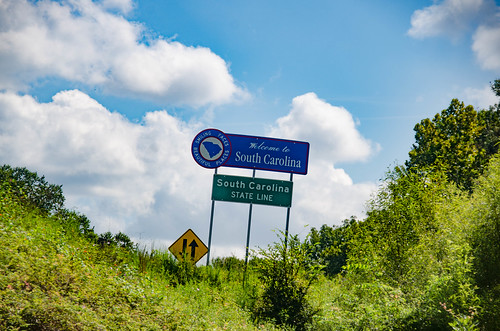 Back out on the highway I continued eastward. A couple of miles beyond the bridge, right where the old and new roadbeds diverge, 301 becomes a divided four-lane highway. Just a bit up from that is South Carolina’s answer to the Georgia Welcome Center. 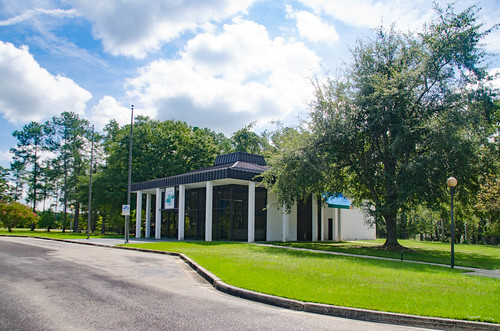 I don’t have the exact dates for construction, but given its placement I suspect it was in the late 1960s, after the 1962-64 widening of this section of 301. I now wish I’d stopped to see if there was a dedication plaque, similar to the one I found in Georgia. That would have given me the date as well as the architect.

Speaking of architecture, this building is similar in style to many public buildings constructed in the the state in the late 1960s and early 1970s. I’ve seen other SC welcome centers with similar design, so I may have to stop by one of those. The building shape, roof line, and columns are reminiscent of the Carolina Coliseum for USC, designed by the firm of Lyles, Bissett, Carlisle, and Wolff. This firm designed many public buildings during that time, including the government buildings around the State Capitol. While it stands to reason that they would be involved in a project like this, I have no proof that this is one of their designs. 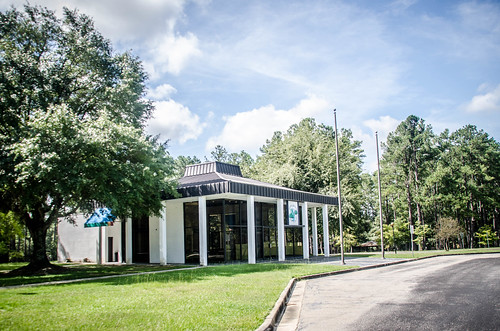 The Welcome Center closed in 2001 due to budget cuts. It sat empty and blockaded until 2010, when the property became the home of the Lower Savannah River Alliance. The group has maintained the picnic areas, and apparently several trail heads start from this point. The Alliance also maintains other trails in the region, and sponsors events focusing on nature. Their website is bare bones, but their Facebook page is much more active and up to date.

Had I known about the Alliance and its mission, I might have spent more time there, exploring the headquarters as well as the trails. As it was, I had just pulled through to get a couple of shots of what I had thought was a defunct welcome center. Given the previously described time crunch, I simply had not allotted enough time for that type of exploration. I’ll have to make another trip down sometime.

That time crunch would plague me for the remainder of my exploration time today. Next up, a quick look at what I found between Georgia and Orangeburg.

One thought on “The Tobacco Trail – Getting Started”