I remember the shock and sadness when I heard the news. On the morning of March 22, 2014 a hillside above the Steelhead Haven neighborhood on the Stillaguamish River gave way, sending mud across the river and wiping out forty-nine homes and killing forty-three people. Heavy rains had saturated the area and the vegetation just couldn’t hold back the soil. The mud dammed the Stillaguamish and caused flooding upstream of the slide, as well as wiping out about a mile of the main route, Highway 530.

The area has a history of geological instability. The Stillaguamish takes several deep bends and the current digs into the banks. In 1937 the area was labeled the “Hazel Landslide” and minor slides had been documented over the years. The Seattle Times has a fascinating interactive timeline that documents the history of slides with aerial photography.

So why was a neighborhood allowed to build in such a hazardous area? Snohomish County Public Works Director Steve Thomsen came under fire for saying, “A slide of this magnitude is very difficult to predict. There was no indication, no indication at all.” There is an ongoing controversy and investigation into logging activity in the area, as well as prior knowledge of the area as a slide hazard. In 2016 “… survivors and the victims’ families reached settlements with the State of Washington and a timber company, Grandy Lake Forest Associates, for $50 million and $10 million respectively….” according to the Wikipedia article

There are lots of before and after images online. Here are two from the Wikipedia article. The first is from 2009 and is looking south from the top of the slide. 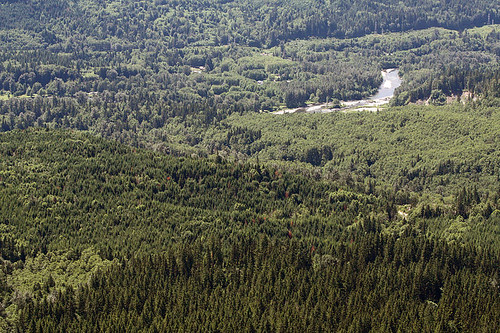 This shot shows the aftermath. It was taken on March 31, just days after the slide occurred.

Google Earth gives a very clear picture of the extent of the slide and the damage. In the historical imagery, both of these images were captured in March of 2014, one before and one after. You can clearly see the streets of the Steelhead Haven neighborhood along the banks of the river, now covered in mud. In the “before” shot, you can even see erosion along the hill above the slide area. To me it just looks like a slide area even before the disaster. It’s also clear from these images that the slide starts right at the edge of a logging clear-cut. 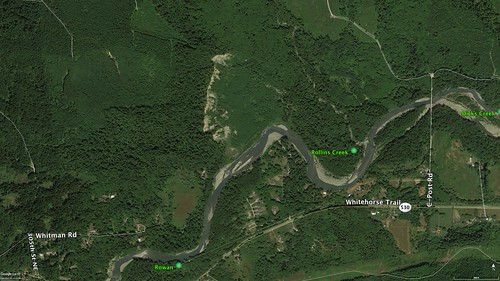 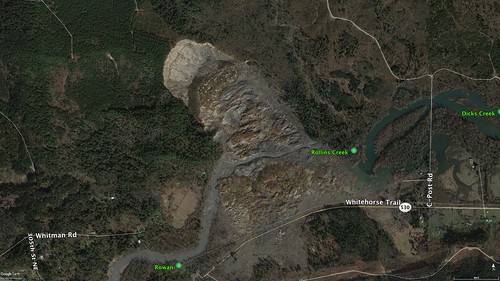 This YouTube video from the Wall Street Journal describes the mechanics of the slide and how it happened.

This video from the Everett Herald gives more details about rescue efforts.

The disaster had a profound effect on the nearby community of Oso and the towns along the Stillaguamish. The phrase “Oso Strong” became a rallying cry and memorial. A year after the community was allowed to grieve, online retrospectives popped up, such as this one.

I first passed through the area when Laura and I were out exploring. We were driving from Darrington to Arlington when we came across the slide area. Just being in the area was disconcerting for Laura and she did not want to stop. I decided that I needed to come back at some time, and that opportunity presented itself this past Monday. I had driven down to Everett to do some exploration, but the weather wasn’t great. I wasn’t able to walk along the streets as I had planned. I figured that along the way home I could visit the slide site.

I had lunch in Arlington then headed east along Highway 530. There had been sleet in Everett and the weather upriver along the Stillaguamish look even more dicey. While there was a mist with broken sun breaks along the river valley, I could actually see the snow falling just a few hundred feet above on the mountain slopes. 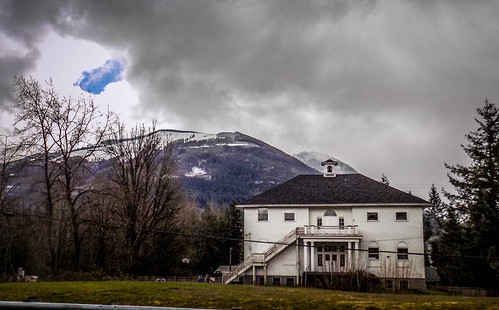 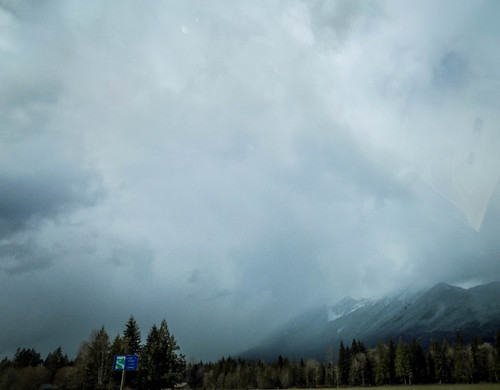 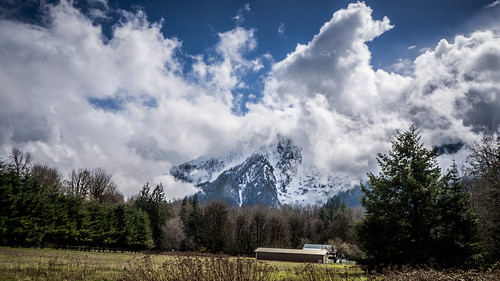 Traffic on 530 was terrible. Road construction had limited traffic to one lane for about three miles. When I finally crested the ridge with the best views of the slide from the highway there was no place to stop. I drove past the devastation, planning to come back. There was no convenient place to turn around for several miles, but eventually I found a place and headed back.

At the point where the road had led into the Steelhead Haven neighborhood there is a gate with a memorial. It was a good place to pull off the road and spend some time. 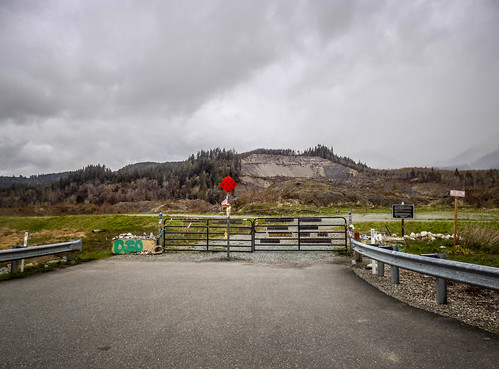 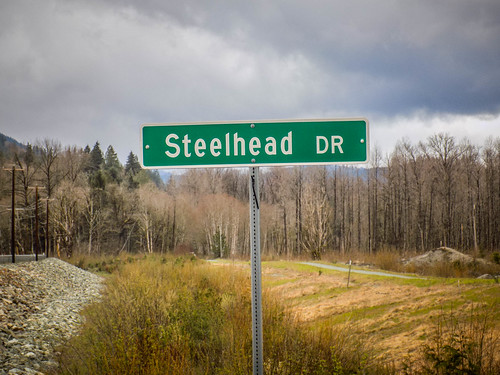 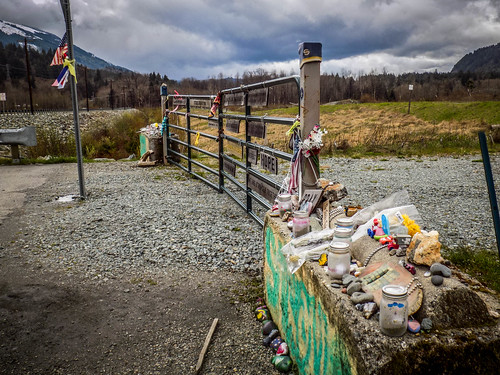 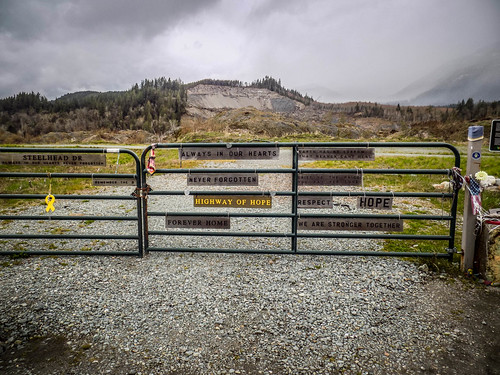 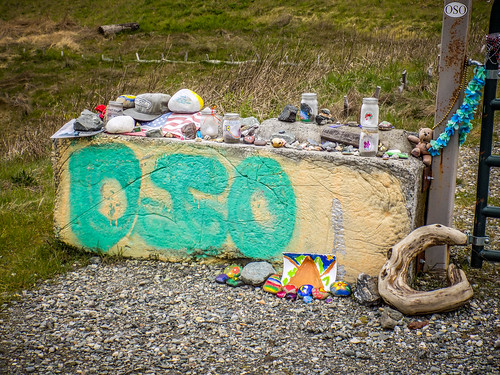 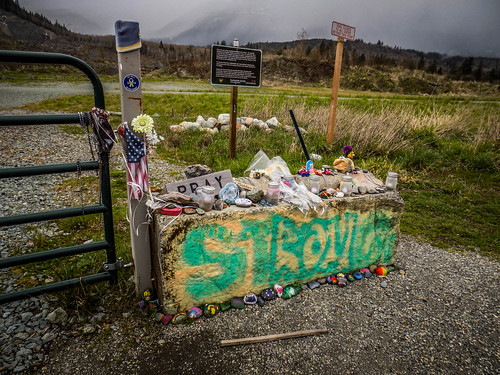 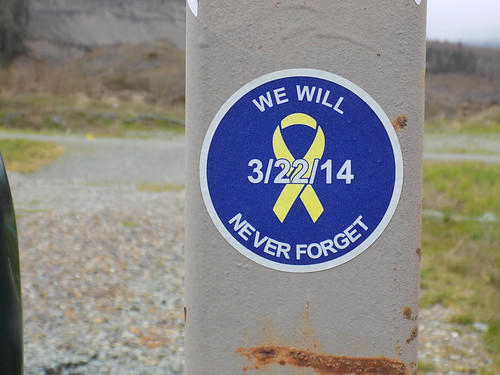 Most of the memorial is makeshift, but Shohomish County has erected an official sign. 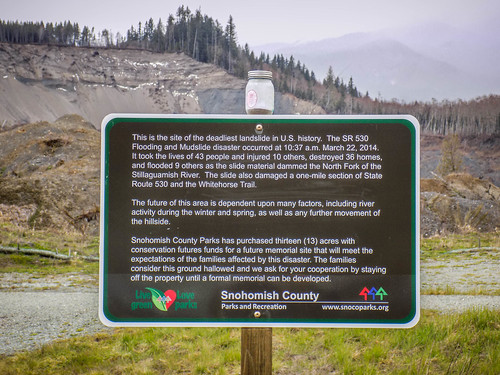 Next to the gate are three rows of cedar trees. A total of 43 have been planted, one for each victim of the slide. The trees have been decorated with items specific to the individuals represented by the trees. 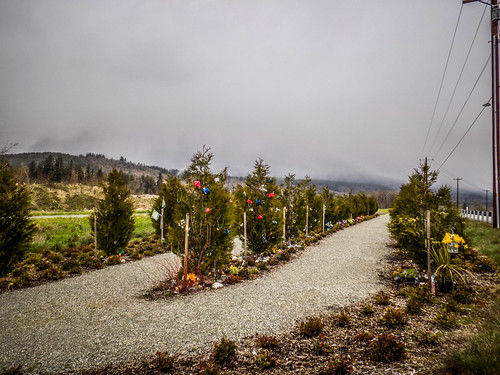 Across the highways on a knoll in a field is a large flag pole and more memorials. 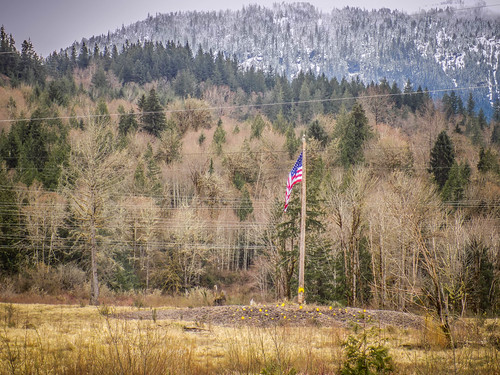 Looming over everything is the devastated hillside, the source of the mud now covering the area. 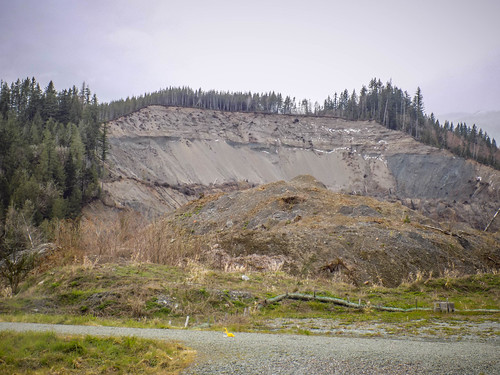 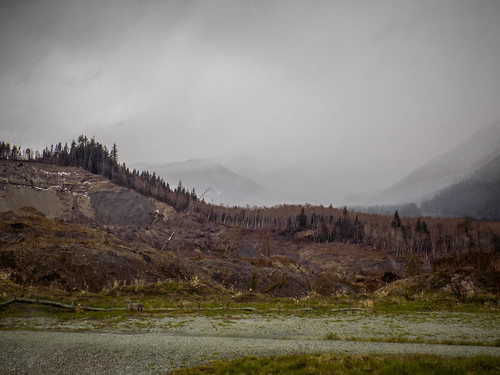 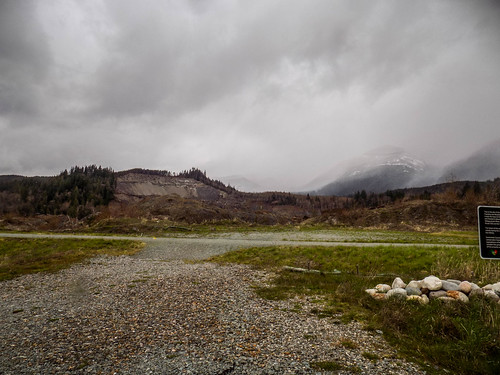 The mud field at the base of the slide is strictly off-limits. Even four years later its still unstable and dangerous.

One would hope that there are lessons to be learned here. Yet, there is a long history of building in hazardous areas. One might not even realize the hazards until the unthinkable happens. Just this past fall with heavy rains along the Skagit River some farm buildings and houses are falling into the river bed because of erosion. We sit at the top of a steep cliff overlooking Padilla Bay. Even along our own road I look at deep erosional cuts along the cliff edge and wonder when part of the road or, heaven forbid, a major slide occurs here. While we can’t change where our houses are now, we can hope that awareness of the problem will at least keep us from further disaster. In the meantime, the barren hillside above the Stillaguamish River serves as a reminder of what happens when we don’t heed these warnings. 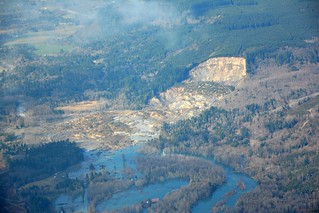