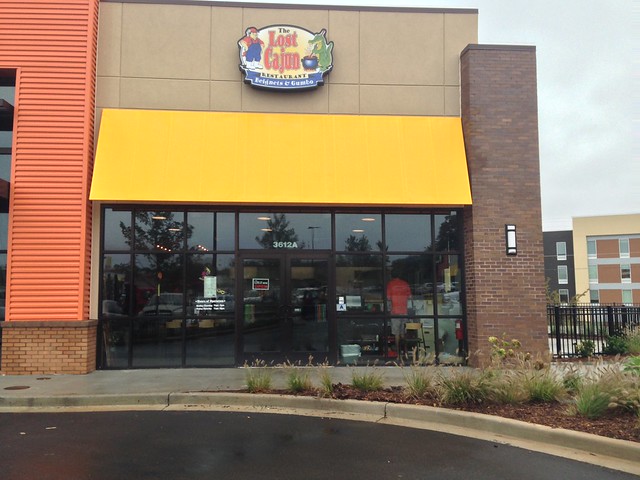 Normally I don’t review restaurant chains. I prefer locally-owned places, those restaurants and cafes that are unique to a particular community. I decided to make an exception for The Lost Cajun for a couple of reasons. First, there is a dearth of Cajun food in our area. Secondly, this is the first foray into our area by this chain. Since it was a rainy Monday, I decided that it would be a perfect opportunity to check out this place.

I’ve long lamented the lack of German restaurants in a town with so many German business interests. Cajun cuisine is about as difficult to come by. There are some places in town that have a couple of dishes, but aren’t really Cajun. Ford’s on Main closed. There used to be a very authentic place called Chop’s nearby on Pelham, but it’s closed. There was a place on Wade Hampton called London’s that tried to make a go of it, but it’s now closed. So, a new Cajun restaurant really caught my attention.

The Lost Cajun is located on “Restaurant Row” on Pelham Road, near its intersection with I-85. There is actually a new small strip of businesses. These include several other specialty restaurant chains, including Tzaziki’s, Local Taco, and the Chicken Salad Chick. Most of these places feature ethnic cuisine or some other unusual food. 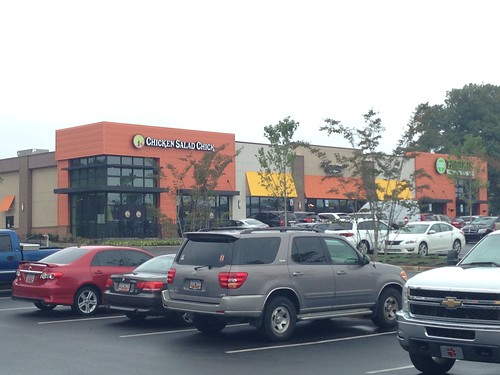 The “Lost Cajun” concept goes like this…franchise owners, usually chefs or other food service professionals with a background in New Orleans cuisine, set up a franchise in some location that is NOT New Orleans. Louisiana native Raymond Griffin opened the first gumbo shop in Frisco, Colorado, and developed the concept from there.

I’d heard that this place was opening, and was hoping for something a bit more cozy. This place has all the cliche New Orleans trimmings – Mardi Gras beads, masks, and the prerequisite phrase “Laissez les bon temps roulez” splashed on the wall. The only problem is that it reeks a bit too much of chain restaurant. Oh well. It’s not bad, but I was hoping for something a bit unique. 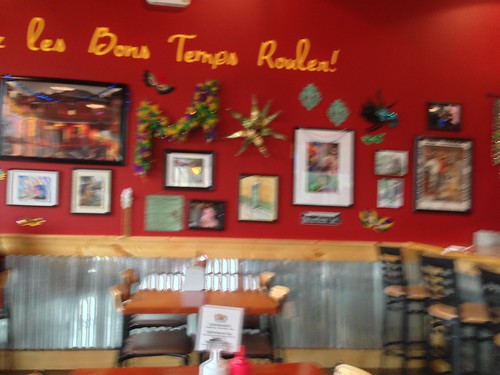 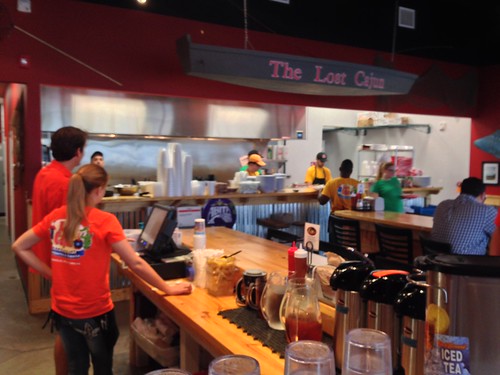 There was a good number of working folks, but it wasn’t overly crowded. Since I was by myself I sat at the bar/counter.

It’s pretty much all of the things you would expect to find in a place featuring Cajun cuisine. There are several types of gumbo, red beans and rice, and even crawfish etouffee. There was jambalaya and Po Boys, and other platters featuring fried catfish, oysters, and shrimp. The gumbos and jambalaya were anywhere from $5-$8 for a cup, and $7-$12 for a larger bowl. The Po Boys were upwards of $10-$12. The platters also had small and large sizes, running anywhere from $12 to $21 depending on size and composition.

They also had a lunch special today, a half of a Po Boy with a cup of gumbo. I didn’t get a price on that, but I imagine it was about the same as a whole Po Boy.

Here’s where things got interesting very fast. The waitress asked if I’d been there before. When I said no, she came back with a sampler of some of their dishes. The sampler included seafood gumbo, crawfish etouffee, lobster bisque, red beans, chicken and sausage jambalaya, and chicken and sausage gumbo. 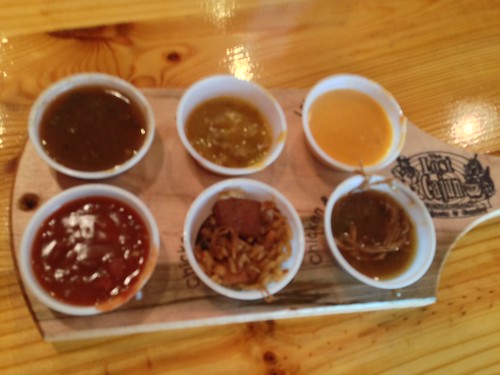 You could almost make a lunch from the samples. All of the flavors were great. However, I found that I liked the dishes with a lighter roux. The ones with a thicker roux – the crawfish, red beans, and chicken and sausage gumbo – were good, but had a somewhat slimy mouth feel. Perhaps too much okra?

I had come in with the intention of getting jambalaya if they had it. However, after tasting the samples, I decided on the seafood gumbo with a lighter roux. I just really liked its flavor. This came in a large bowl with a scoop of white rice in the middle. 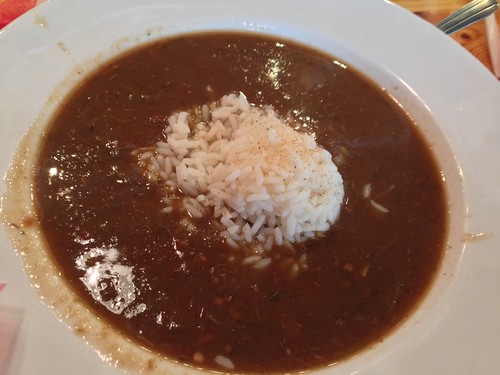 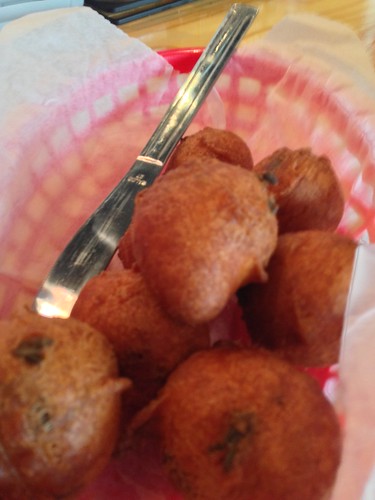 What New Orleans meal would be complete without a beignet for dessert? I ordered one, and it came out piping hot. When I bit into it, steam rushed from the interior and fogged my glasses. I had to let it cool a bit. I have confession…it’s the first beignet I’ve ever had, so I don’t have any comparison. To me, it was great, something like a cross between a croissant and a light doughnut. 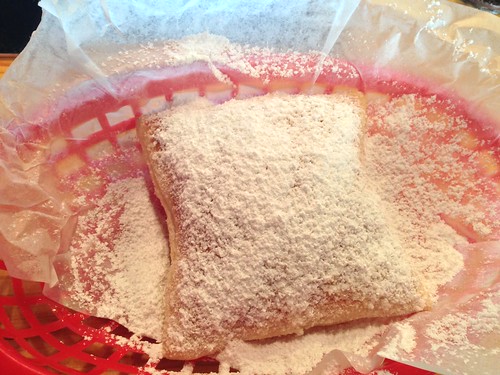 The waitress was super helpful, explaining the dishes and bringing out the samples. Service was quick and efficient. To be honest, at times it seemed that there were more servers than customers. I had a couple of them come by and check on me.

The place is a keeper. Despite the chain restaurant feel, the food is great, if not a bit pricey. If it weren’t for the prices and available wait service, I’d even call it Cajun fast food. It fills a much needed niche in the Greenville culinary landscape.

4 thoughts on “The Lost Cajun”