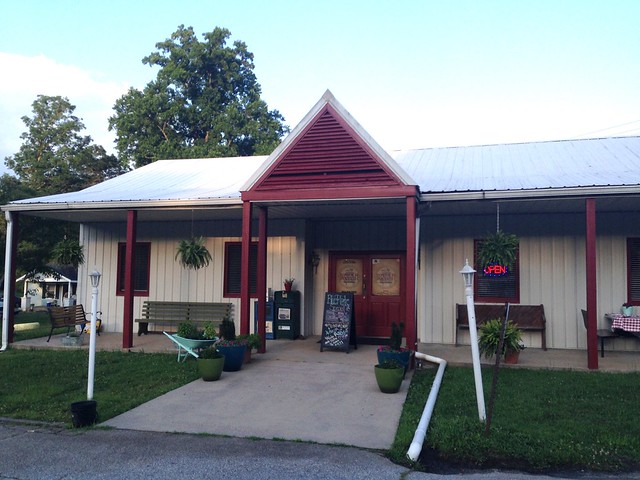 Keith is a native Mariettanite. He’s seen this particular building go through multiple incarnations, usually in the form of a classic local diner or meat-n-three. Its newest incarnation is as a hipster BBQ joint that endeavors to serve good, local, innovative food at a reasonable price.

The heart of this endeavor is Chef Daniel Dobbs.

“DoBBieQ is a food concept that involves local goods and good locals.”

Dobbs worked for several restaurants in the Upstate, and most recently took his DoBBieQ concept to IPA on Poinsett Highway in Greenville. His new place in Marietta has been open for about seven months. In addition to the restaurant, Dobbs runs a catering business featuring food from DoBBieQ.

Keith was driving his snazzy new VW convertible, and Tony and I were following behind in Laura’s Mini convertible. When Keith made the turn into the restaurant’s parking lot, Tony and I both looked at each other and asked, “Why are we going to an ABC store?” 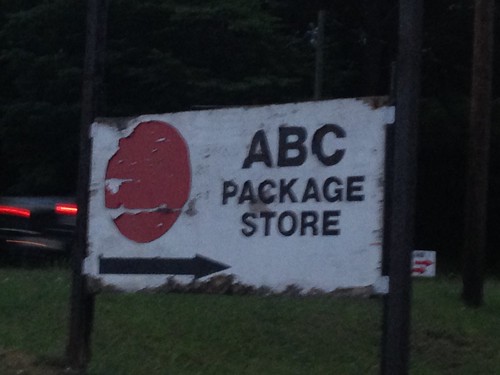 That was the only signage visible from the Travelers Rest direction. There was an ABC store, but it was on the back side of the parking lot. The restaurant sits perpendicular to the highway. 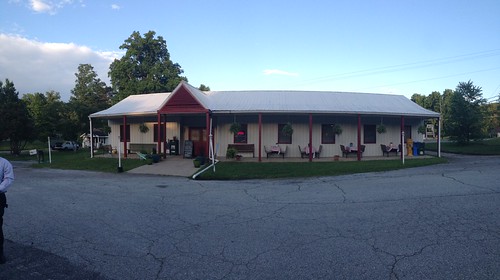 There is a cashier’s counter where one can order take-out, and the main dining space is to the right. To the left is a smaller room for overflow or for special events. Both rooms have copious seating at tables covered with red-checked tablecloths. 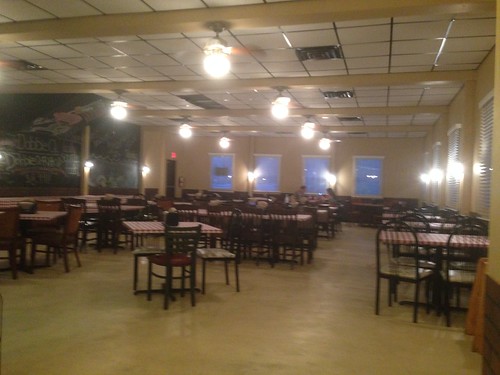 Across the back wall of the main dining area an enormous blackboard lists the daily specials. The decor is otherwise sparse, apart from some articles presenting information about the Slater-Marietta community. 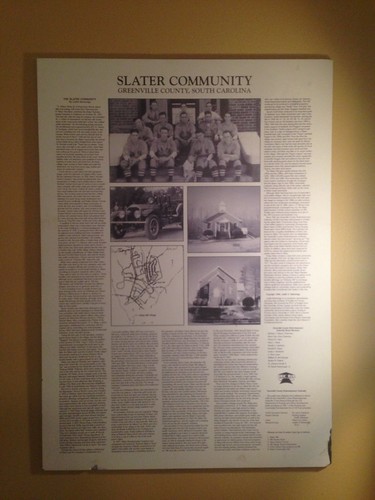 There were a couple of families seated nearby. These seemed to be local working folks from nearby, living up to the DoBBieQ mantra of “local goods and good locals.” I think one might have even been a former student of mine. It was later on a Thursday night, so no crowds.

This being touted as a BBQ place, I expected the usual smoked suspects to scream from the menu. That wasn’t exactly the case. It looked more like a listing of home-style favorites. 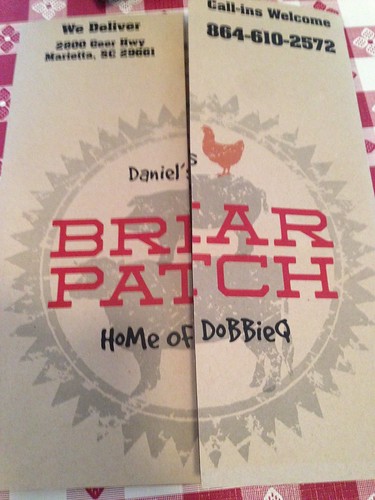 There are some specials, as well as salads and sandwich platters, but the heart of the menu looks more like a meat and sides selection. You pick from four meats or a veggie plate, then you can get it in several different styles. It can be served over grits with gravy, as a sandwich with a side, as a melt with grilled onions and cheese over Texas toast and a side, or as a plate with two sides. Prices for these run from $8 to $12. 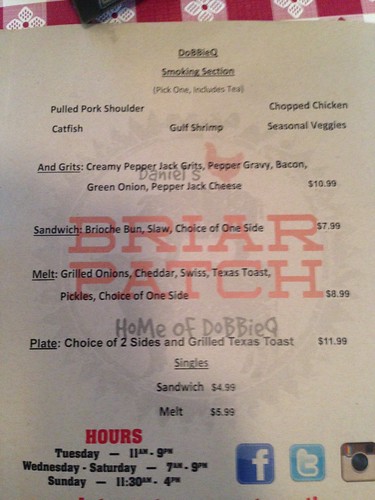 The specials for this evening were smoked chicken or honey glazed ham with three sides for $6.99 – a darn good deal. 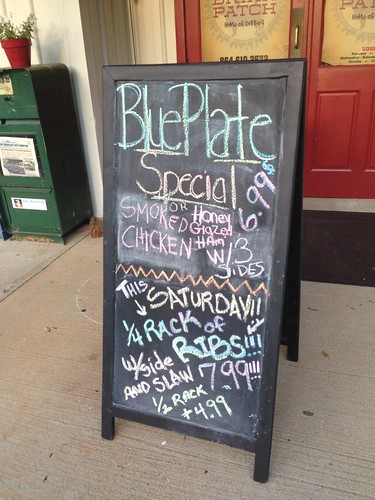 One word of warning, though. Sometimes the quantities can be limited. When we were seated our waitress ran down a list of things they were out of. Keith had wanted the honey glazed ham special, but it was not to be had that evening.

In a place like this the proper protocol is to order sweet tea. You can get something else, but if you’re going to do it right, tea it is. As we were sipping, our waitress brought out a bowl of fresh made cracklin’, AKA pork rinds. These were still hot, so they had just been cooked up. They were salty and good. We made short work of them. 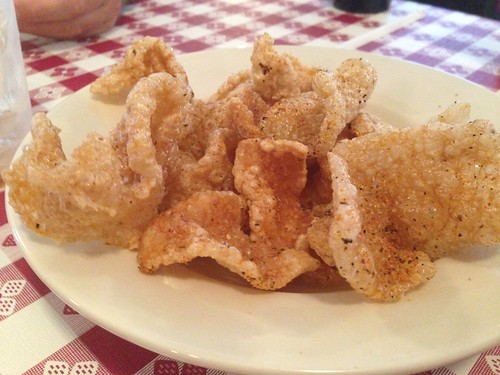 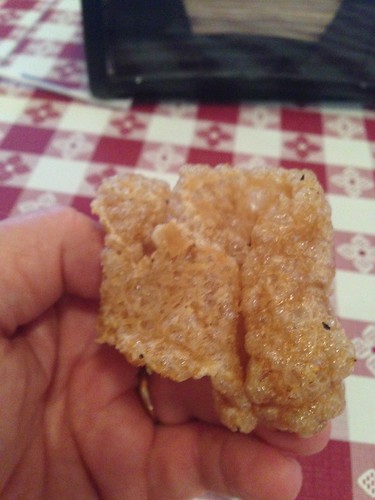 All three of us had ordered salads to begin our meals, and we had gotten exactly the same thing – a Caesar salad with signature black-eyed pea dressing. I’m not quite sure what I was expecting (it just sounded cool.) The salad was pretty much a classic Caesar, but with crunchy peas to add a bit of textural contrast. I think they were there more for crunch than for flavor, substituting for croutons or some other nut. The flavor was quite good, but what really made the salad was the shaved Parmesan cheese. 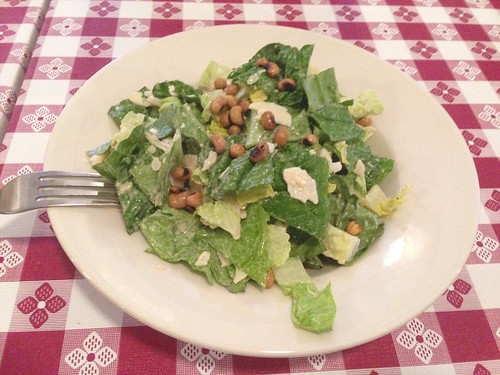 Soon enough our feasts arrived. Keith ordered turkey and dressing with mac and cheese, and raved about the gravy and dressing. Tony and I had ordered exactly the same thing – pulled pork shoulder with pepper jack grits and a grilled squash/zucchini medley. 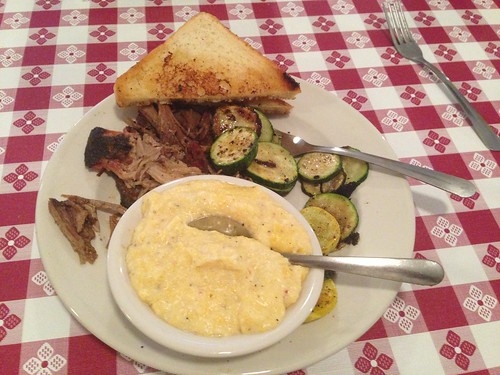 Keith said that the pepper jack grits could be spicy. To me, they weren’t at all. They tended to be a bit dry, though they did have good flavor. The vegetables had a nice smokey flavor, but were also a bit salty taken in context with the rest of the meal.

Oddly enough, the meat proved to be the juiciest bit of the meal. Flavors were great, and coloration showed nice smoke penetration throughout the pork. There was a sweet bourbon sauce or a mustard sauce available. I tried and like both, going back and forth between them throughout the meal.

You want to provide a good selection for customers, but the inherent danger of the mix and match of a meat-n-sides is that you can select items that might not complement things as well as you would like. On their own, each component of my meal was quite good. However, my palate had no respite from the salty smoke. I selected the vegetables, thinking they would be a nice contrast, but they were also salty and smokey. I don’t know if another choice would have made a difference – the green beans were tagged as “smoked green beans.” The grits might have provided a nicer contrast if they hadn’t been as dry. The meal tended to stick to one side of the flavor profile. I didn’t even eat my toast because it was too much dry. Maybe next time I’ll get baked beans as one of the items instead.

There weren’t any desserts available this evening, for some reason, so I grabbed a couple of home-made cookies on the way out as I paid my bill.

Our waitress was young and quintessentially Southern, peppering her conversation with phrases like “my love” and “honey.” She was attentive and efficient, and answered our questions with patience.

The food was quite good, and DoBBieQ seems to know his craft. Although we picked the pricier items from the menu and made it even pricier with the addition of salads, you can get a good, pretty filling meal for a reasonable price here.

Travelers Rest has come alive as a food destination, with lots of new restaurants several more planned. It’s nice to see that success continue on up the road to Marietta.