It hardly seems possible. This month marks ten years that I’ve been blogging at RandomConnections.com. The new website was announced on May 6, 2004 on a post on my previous website as follows:

With the new site in place, I’ll be able to create blog entries for specific categories, probably one for each of my alter egos that I use on various bulletin boards. I’m also going to post our travelog and vacation gallery there.

I love the Internet! Instead of boring just one small set of humans with your vacation pictures, you can annoy the entire planet!

The new website is now active (Duh, obviously). This site features a much more interactive weblog than my old site, while keeping things lean and clean. The other site turn [sic] into self-indulgent blathering, was over-designed, and cumbersome. I make no guarantees about this site, but at least the blathering will be categorized.

I also don’t intend to plaster my name over everything on this site. Certain portions will be kept more professional, and will focus on Education Technology and Web Design.

Yes, both of those posts are still online, as evidenced by the links above.   I haven’t fulfilled the promises in those early posts, but I had no idea I’d still be doing this ten years later, or what those ten years would have brought.

Before RandomConnections I had a personal website at www.taylordigitalarts.com. To say that it was “self-indulgent blathering” was an understatement. It had my photo, idiotic quotes, and a javascript keyboard menu that had notes that depressed when clicked. Fortunately I had the good sense not to have it play a tone as well, but thought had crossed my mind. The thing even had the Papyrus font for the headline, for goodness sake. 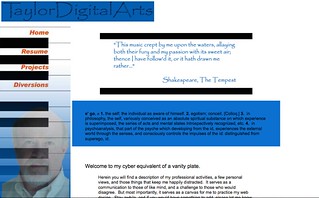 That first site came online in 2002. In 2003 I added a homegrown blog section. It was fairly simple, and looked more like something from a low-end MySpace – a bit juvenile. It was powered by ASP with an MS-Access database on the back end. I wrote the code myself, and it seemed to work OK.  Part of the reason it seemed so juvenile at the time was that blogging was in its infancy, and the only models I had were youngsters who seemed to be violating all the accepted web practices with new formats.  Partly I was teaching myself how to code, since I was designing other online applications for our school district.

I kept that blog for about a year. However, by 2004 several events brought about the need for a new site. First, the hosting was inadequate. I had limited space and no way to host photographs. Secondly, we were getting ready to take a LONG road trip, and I wanted an easier way to post a travelogue. Thirdly, and probably most importantly, I was a bit embarrassed by the self-indulgent tone the blog had taken. The whole endeavor seemed a bit silly, and I wanted something more professional.

I found that I couldn’t just transfer the domain name. The freebie/extremely cheap hosting company I had kept a lock on the domain. Lessons learned. BTW, I’ve just recently reclaimed the TaylorDigitalArts.com domain. I may figure out something to do with it.

I needed a new domain name. I wanted Random Thoughts, but that was taken. Random Connections was one of the suggested alternatives, and the rest is history.

With the new host I had lots more space, and could start adding photos. I copied over the ASP blog management system I’d had on the old site and updated it to include a way to upload and embed photos. These were also stored in the Access database. I had a digital camera, but was still shooting with a film SLR. Even with more space, I had to severely edit scanned photos and photos from my digital camera – they were still just too big. 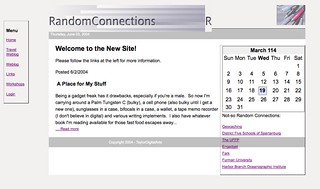 Notice that it still had “Copyright 2004 TaylorDigitalArts” at the bottom. That didn’t last long. I soon stopped bothering with the old site in favor of the new one fairly quickly. I eventually merged the two sites, so now all content resides here. For that reason it’s been hard for me to determine the first post after the initial announcement, but I think it was a review of Jordan’s Restaurant (now closed.)

As mentioned previously, we were planning a long road trip. We had just purchased an Audi A4 convertible, and we would be driving it from our home to Laura’s mother’s place, about two hours north of Seattle. Along the way we would be stopping at various national parks and other places of interest. We wanted a way to keep Laura’s mom updated as to the trip, so the new website had a separate travelogue section with a map that we could update. We would be uploading images from the road. It was the 200th anniversary of the Lewis and Clark expedition, and our route would roughly follow theirs.

With the site redesign I had not only provided a way to include photos, but also a way to categorize the posts and leave comments. I had several comments posted about places we stopped along the way and the system seemed to be working quite well. However, even the increased web space wasn’t enough to handle all of the photographs. Within a year I was running out of space. I had to find another solution if I was going to continue doing photography.

Along came Flickr. In 2005 I signed up for an account, using RandomConnections as the username. The intent was that it would be a companion for this site, and host images in a way that would not take up any more of my precious hosting space. The first image was this photo of Pomaria, taken in July of 2005. Now, nine years later, I have nearly 30,000 photographs on Flickr. I still use it as the primary image hosting for this site. I tend not to include many descriptions on my photos because I write about them here.

Since then I’ve tried to use the RandomConnections name with all of my media hosts, including YouTube and various audio sharing sites. The intent was that it would all tie back here.

About the time that I set up my Flickr account I started having problems with the website. It seems that some of the recursive loops I used in my programming were causing problems with my host’s servers. I decided to abandon the code I had written and go with WordPress. My first post on WordPress was on July 2, 2005, and I’ve used it ever since.

In the early days the posts were very brief. This was in the days before Twitter and Facebook, so microblogging wasn’t a thing. Now my short bursts of inspiration are shared on those other venues, and I write much longer posts here.

I’ve continued blogging after many have abandoned the practice. Looking back, I see links to tons of sites that no longer exist. The Internet landscape has changed dramatically in that time.

I’ve tried to keep stats on the site, but these only go back about three years. In that time I’ve had almost 200,000 views, with the highest hit rate being about 800 views in one day. The most popular posts are as follows:

The most common search terms used to find this site are “geocaching”, “lake jocassee waterfalls map”, and “abandoned places in south carolina”.

So, will I keep blogging now that so many have given up the practice and social media gurus have long proclaimed that “blogging is dead?” Probably. Having just retired I’ve got lots of time to explore and go on adventures, and more time to write annoying posts about said adventures. I’m hardly done.

However, even more so, I do this for myself. I’ve subconsciously divided my life into pre-2004 and post-2004. The very act of writing about my experiences helps me to remember them. Plus, I can go back and look up the information if I need. My life experiences prior to that time seem somewhat disordered. I think this would be the same whether or not I blogged or if I had kept a written journal. It’s just that I can annoy a wider audience this way.

The past ten years have seen major changes.  That stretch covers a large part of my career as a school administrator and instructional technology professional.  I’ve tried to write about those passions, as well as other things that keep my interest.  While I have written about personal events, such as the deaths of friends and family, I’ve tried not to get overly maudlin.  I also have not written anything about Laura’s struggle with cancer over the past year or my own career struggles up to the point of my retirement.  I just didn’t think this was the place.  I’ve tried to shy away from politics and religion, but occasional that creeps in.

Old habits die hard.  I’ll probably keep writing the way I always have, breaking all of the accepted literary rules at some point or other.  I am looking at new formats for the blog.  I particularly don’t like the fact that the font is so small.  That may be a simple CSS tweak, or a complete overhaul.  I guess we’ll see.

Enough metablogging.  Thanks for sticking with me and my random drivelings.  I can’t promise improvement, but I’ll keep looking for cool things that need some sort of comment.  I’ll try not to be overly verbose, but sometimes it just happens.  In either case, I’ll keep seeking out those random connections that make life so interesting.