After the Civil War southern states had to cope with the reality of newly freed slaves. The former slave-holding states set up “Freedmen’s Bureaus” to manage land claims and other issues relating to the former slaves. This included the development of several predominantly African-American settlements on former plantation lands and other available land in the state. In South Carolina these settlements began with the Port Royal Experiment and the town of Mitchelville. Other settlements included Kingsville, Promised Land, “Little Africa,” and Liberia.

The Kingdom of Happy Land was another such settlement, although not as formally established as Mitchelville or some of the other settlements. Sadie Smathers Patton wrote a history of the settlement in 1957, and states that the original settlers were a roving band of freed slaves from Mississippi and Alabama. These were led by a man named William Montgomery, who had a white father and a black mother and who purportedly even had owned slaves himself prior to the war. William and his wife Louella had been taught how to read and write, and served as teachers and ministers for the group. The band picked up followers, and eventually made its way to South Carolina and over the State Road through the town of Merrittsville, then up over the mountains to Tuxedo.

“Miss” Serepta Merritt Davis was the widow of Col. John Davis, a veteran of the War of 1812. They had owned a plantation in the Tuxedo area named Oakland. Davis struck a deal with the band of former slaves where they would be allowed to live in the old slave cabins and work the land of the former plantation, which straddled the North Carolina/South Carolina line. The new residents eventually purchased about 200 acres of land from the Davis family for $1 per acre, and the Kingdom of Happy Land was born.

Commerce in Happy Land was based on a communal effort. All crops and income were collected and distributed equally. The denizens produced a concoction of healing herbs called “Happy Land Liniment” that they sold to the surrounding neighbors and communities. Many took additional work as farm hands and domestics in Tuxedo and Flat Rock.

The residents of Happy Land also reportedly “squeezed some corn,” meaning that they distilled and sold moonshine illegally. It was said that their location right on the NC/SC border was ideal, as they could simply step across the line into another jurisdiction should trouble arise.

Even though life was communal, the Kingdom did have a King and Queen. William and Louella Montgomery first served that capacity. When William died, his brother Robert took over as king and his sister-in-law, Louella, remained Queen. Robert and Louella served as King and Queen for the longest period of time, and their names appear on the deed for the lands. They lived in a cabin that was dubbed the “palace.” The following photo from Patton’s book is of the remains of the Montgomery Palace, the last building in the Kingdom. 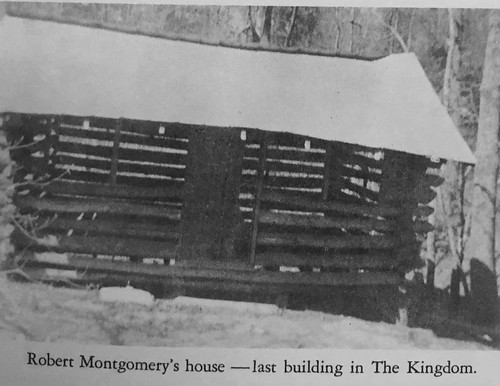 The Kingdom thrived for awhile. Queen Louella set up an informal school for the children and formed a choir. They had their own chapel, and Patton’s book states that, “tenets held by some members of the Kingdom could be classified as a ‘cult.'”

A Reverend Ezel Couch was brought to the Kingdom as a young child from Union, SC, and went out as a kind of missionary to entice other African Americans from South Carolina to join the group. Here is a photo of Couch from Patton’s book. 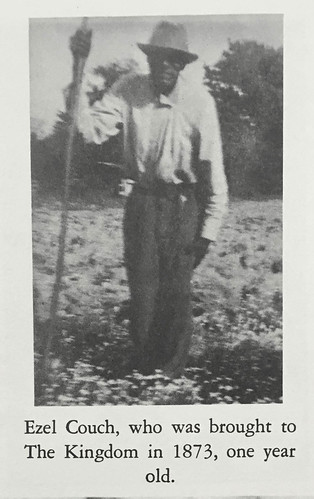 Eventually the Kingdom residents left to find other work and the population dwindled. In the early 1900s the former settlement lands were sold for non-payment of taxes. Jerry Casey, the last resident of the Kingdom, died in 1918. The land was purchased by Joseph Bell who established the camps in the Tuxedo area on Lake Summit and the original Kingdom remains in possession of the Bell Family to this day.

It was rumored that gold had been stashed in the chinks and crevices of the old Palace cabin. The Bell Family eventually dismantled the remaining chimneys and structures to thwart treasure hunters seeking the gold.

Sadie Patton’s short book included a stylized map showing the location of the Kingdom of Happy Land. Knowing that it probably highly inaccurate, I figured it was close enough to get me to the right area. 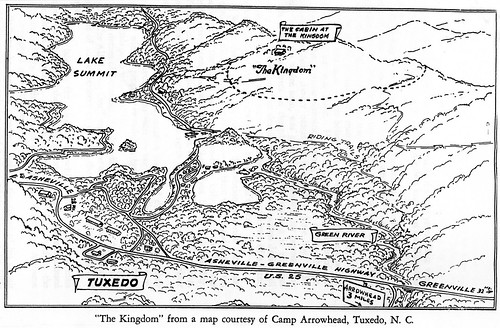 I headed out of Greenville early Thursday morning and drove up US 25 toward Hendersonville. Just north of Highway 11 I took the old 25 route across the Greenville Watershed, somewhat following the path of the original settlers. Eventually I made it to Tuxedo, coming to a view of a mountain that I could sort of, maybe, line up with the map. 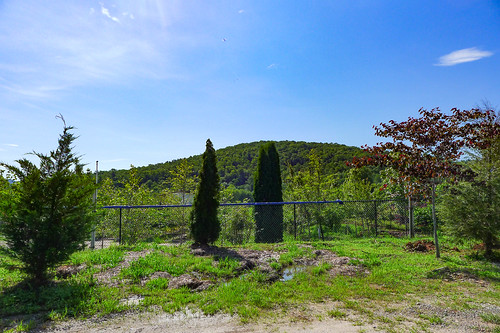 I knew I needed to get closer. I turned onto South Lake Summit Drive. Summer camp was in full swing and the lake was covered with small sail boats, canoes, and kayaks. Large groups of kids in swimwear and with towels walked down the road toward me. 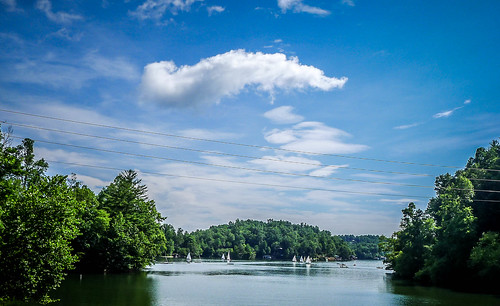 The lakeside road takes a sharp bend in a deep cove, at which point Bell Mountain Road branches off and heads up over the mountain. I figured that had to be the correct route. The road does wind up the mountain, passing coves dotted with small farms and mobile homes. I could imagine the early Kingdom settlers working these lands. 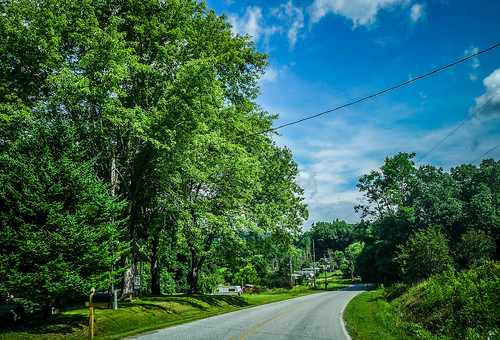 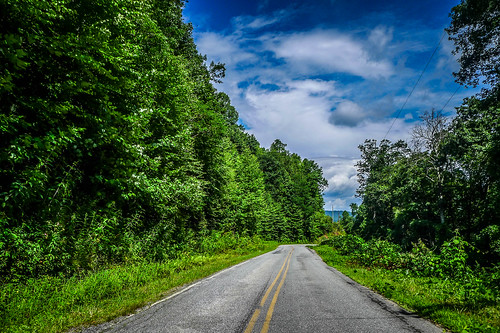 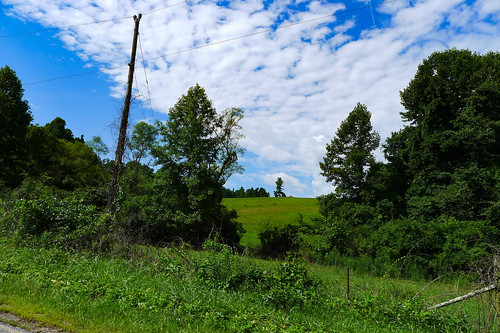 Eventually the pavement ended at the top of the ridge and the road branched north and south. I was at the state line, and the property on the other side of the road was on the Greenville Watershed. The dirt road to the right was marked private, but the dirt road to the left continued on. I turned left.

The dirt road was narrow, steep, and in terrible condition. I had only gone a couple of hundred yards when I came to a washed out area that I just didn’t feel comfortable negotiating. I have confidence in my Subaru. I just didn’t have confidence and a dicey road that had seen too many storms in the past weeks. I warily backed out the way I had come. 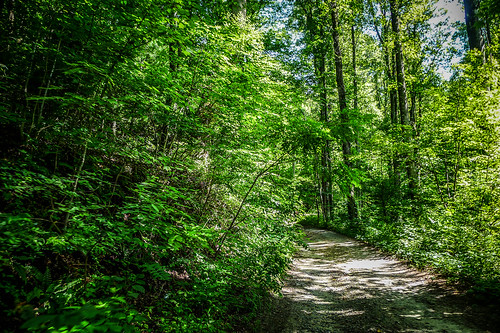 I retraced my steps back down Bell Mountain Road. I had gotten as close to the Kingdom as I was probably going to get. I knew it was on private land and I wasn’t going to be able to see the remaining foundations and ruins. I did want to see if I could find a better view of the mountains as pictured in the Patton book. I drove on around Lake Summit, looking at the small lake cottages and boat houses that line the lake and wondering if I should bring a kayak up as my friend and fellow explorer Mark Elbrecht had done awhile ago. Mark has an excellent description of what he saw on his paddling trip on his blog.

Eventually I found a spot that had a view of Bell Mountain and the surrounding area. 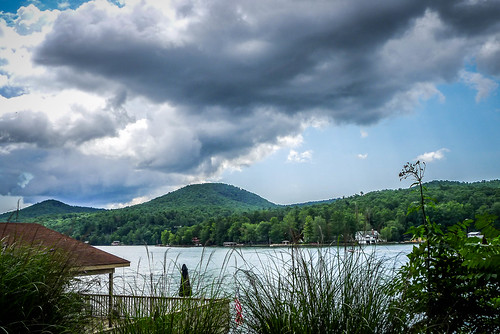 Part of the problem is that I didn’t have an accurate location. I just knew that the Kingdom had been on the state line and that it was near Tuxedo. I feel like I got close, but there was no real way to tell.

I had one more stop I wanted to make, though. I drove on up through Flat Rock, stopped at Haus Heidelberg for lunch, then headed to the Henderson County Library in Hendersonville. There I found a copy of Sadie Patton’s book in their genealogy reference room. 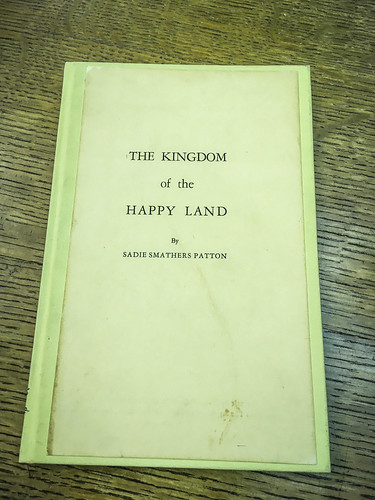 The book (pamphlet, really), is only 18 pages long. Patton’s language is florid, speculative, and her comments on race are uncomfortable to our modern sensibilities. This was in 1957, after all. Some of her details seem to conflict with each other, such as the identity of the original leader of the Kingdom. She first says that the leader was unknown, then later identifies him as William Montgomery.

Even so, Patton’s book seems to be the definitive work on the subject. I’ve listed my other online reference below:

I may not have found the Kingdom of Happy Land, either physically or metaphorically, but it was still a good day of exploration. I guess that, in a sense, is my own personal happy land. 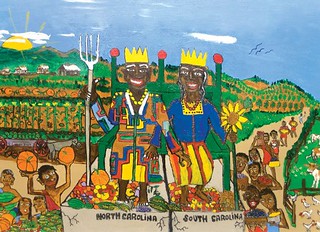 4 thoughts on “Seeking the Kingdom of Happy Land”