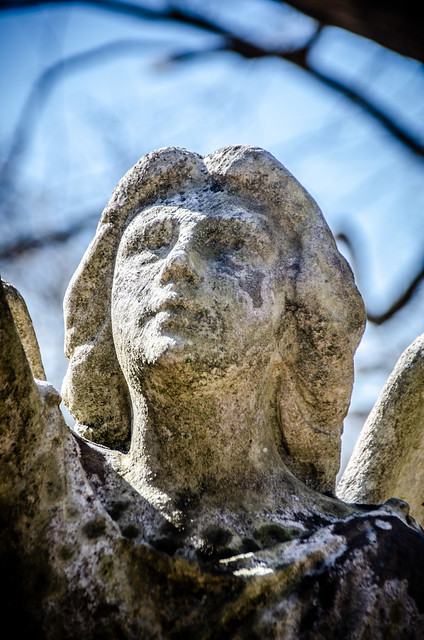 I had done the research. I’d read the book. I was ready to head out and find the angels sold by William Oliver Wolfe’s monument shop in Asheville, made famous by his son, Thomas Wolfe, in his novel Look Homeward Angel. Joining me would be fellow explorer Alan Russell.

I had actually been planning this trip for a long time, even before we left for Washington last year. I just hadn’t found a good opportunity. Alan and I have always tried to do an exploration on Martin Luther King Day since he has the day off, and we figured this would be a good time to find angels.

Most literary scholars agree that the angel from Thomas Wolfe’s novel is located in Oakdale Cemetery in Hendersonville. There is a historic marker at the location designating it as such. However, through my research I had found that W. O. Wolfe had sold eleven other angels and statues that had been installed mostly in the Asheville area. These were as follows, with links to their Find-a-Grave listing where available:

In addition to these there were two that were sold and transferred to Texas and Tennessee. Wolfe did not carve any of these himself. They were designed by unknown sculptors in Carrera, Italy. Wolfe purchased these from Cameron and Company in New York and had them shipped to his monument shop by the Southern Railway.

From this list I was able to generate a target map. It was doable in a single day, but it would be a stretch.

MLK Day turned out to be bitingly cold. There were high winds and temps well below freezing in Greenville. I knew it would be worse in the mountains. I also knew I had to get back in time for Chorale rehearsal in the evening, so I decided to cancel the Bryson City portion of the trek. The angel at the Emma Bell grave site is listed is “missing,” leaving only one angel at that location. I decided it was a long way to drive for a single angel.

I was surprised. As an English teacher, I had assumed that Alan would have read the novel. He had not. Neither had he visited the angel in Hendersonville. I decided that should be our first stop.

We arrived just as the sun was cresting the horizon. In fact, I was worried that we might not have enough light for photography. Turns out there was plenty and the angels were illuminated beautifully.

The angel stands guard over the grave of Margaret Bates Johnson, wife of Rev. Dr. Henry Johnson. According to Find-a-Grave Dr. Johnson was the president of Whitworth Female College in Brookhaven, Mississippi. The Johnsons both died in Mississippi but their bodies were re-interred in their hometown of Hendersonville.

According to a brief 2013 article in the Asheville Citizen-Times, “Myra Champion, a Pack Memorial Library reference department employee and Wolfe historian, determined in 1949 that the Hendersonville angel is the one the famous author referenced.” A historical marker indicating the angel’s relationship to Wolfe’s novel is located on Highway 64 just outside of the cemetery.

The Johnson graves are surrounded with an iron fence, but this wasn’t always the case. Once the angel was identified as the one from the novel, adoring fans would come to admire, touch, and in one case even hug the angel, causing damage. A tip of a wing and the angel’s pointing right hand were knocked off and repaired. The fence was erected to protect the monuments. As late as 2017 the angel underwent restoration and cleaning.

One side note: Prior to Champion’s research regarding this angel, several of the others on our list were also candidates for THE angel. This includes the grave of Emma Bell in Bryson City, whose angel is now missing, most likely stolen.

It was bitterly cold and the wind was brutal. Alan and I would normally explore the surrounding cemetery for more interesting headstones. Not this time. We wanted hot coffee and breakfast.

Breakfast at the Moose Cafe

I had eaten at the Moose Cafe in Asheville once before with Keith Dover on another Wolfe expedition. I figured that would be an appropriate place for us to eat this morning.

This being a Monday morning and a federal holiday, things weren’t too busy. We learned from our hostess that it was National Squirrel Appreciation Day as we were led to our seats. Moose and Squirrel.

The coffee was a warm welcome and the breakfasts were huge. Alan and I both ordered The Biltmore, complete with a side moose cake.

When we finished Alan had to browse through their gift shop to see if there was any moosabilia that he just had to have.

3 thoughts on “Searching for Wolfe’s Angels – Part Two, The Search”