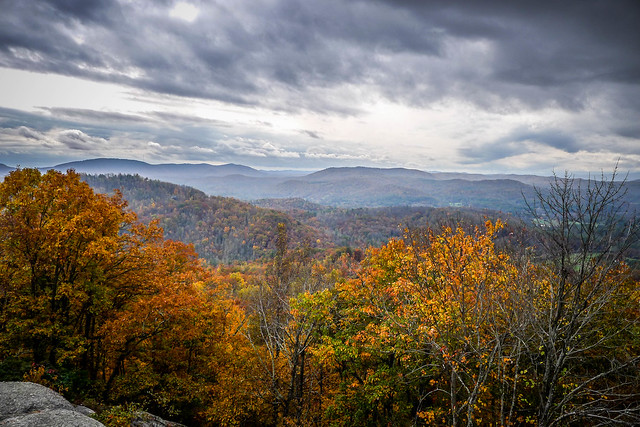 There used to be a BBQ place near my office in Duncan, South Carolina that we would frequent for lunch. There were lots of exposed timbers and it had a logging/lumberjack theme. Old photographs hung on the walls of men with saws felling giant trees. On close inspection, I could see that all of these were labeled “Skagit Valley Lumber.” It caught me off guard…but it really shouldn’t have. There has long been a connection between Appalachia and the river valleys of Washington, much of it based on the timber industry.

Western North Carolina is known as the “Cradle of Forestry.” George and Edith Vanderbilt of the nearby Biltmore Estate are credited with sponsoring the first science-based approach to forestry. However, logging and timber were booming in the area long before the Vanderbilts got involved.

When the timber areas began to open in the Pacific Northwest skilled lumber workers were needed. Settlers came from all areas, including the Southeast. Some of these, like the individuals in Part 1 of this series, were Confederate veterans looking for a more lenient climate. However, the real migration picked up with the completion of the railroads, first the Great Northern Railroad from Seattle to Bellingham in the 1890s, then the railroad from Burlington to Rockmont in the early 1900s.

The railroad and timber wasn’t the only draw for Southerners. Long before the Great Depression affected the rest of the nation Southern states were hit by the aftermath of the Civil War, Reconstruction, and the backlash to Reconstruction. Gold was discovered in Washington in the late 1800s drawing many migrants from the Southeast. However, it was the Skagit Valley timber industry that attracted and employed most of the Southern migrants. 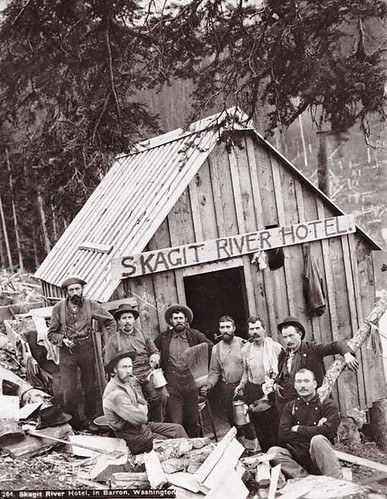 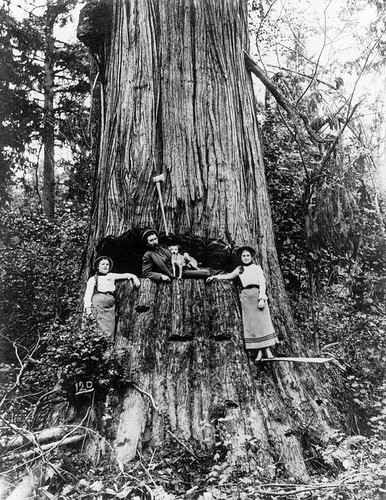 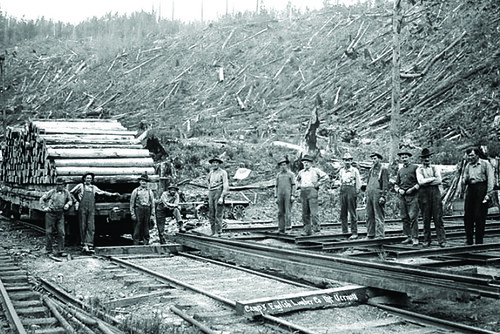 Most of the Southern settlers came from Western North Carolina counties and communities – Waynesville, Sylva, Hendersonville, Bryson City. There were a large number of settlers from other southern states. However, all were given the label “Tar Heel” once they arrived in the Pacific Northwest, regardless of their state of origin.

“Some of our best people are leaving here for Skagit County,” reported early editions of the Jackson County Journal, Dan Tompkins’ paper that flourished in the early decades of the 20th Century but became a casualty of World War II and ceased publication in 1943.

Skagit County, Wash., and Jackson County, N.C., are very similar. Both provide mountains and great fishing – here, it’s trout; there, it’s salmon. We have a national park; they have a national park. Jackson County has The Sylva Herald; Skagit County has The Skagit Valley Herald. We have Western Carolina University; they have Western Washington University.

The area along the Skagit River near the towns of Lyman, Hamilton, Concrete, and Rockmont became known as “Tar Heel Land.” The town of Darrington down in Snohomish County along the Stillaguamish River also received a large number of Southern migrants. The term was applied to several regions in Northwest Washington on both sides of the Cascades. This 1910 newspaper clip is from the town of Wenatchee, east of the Cascades. Okanogan is in the middle of the state. 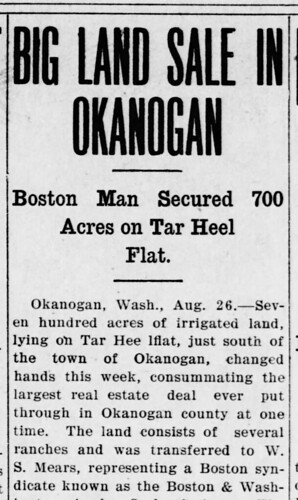 The Tarheels brought their culture with them, including cuisine, music, and even animals. It is said that the North Carolina migrants are credited with (or blamed with, depending on whom you ask) the introduction of the American Opossum to the area. From the Washington Department of Fish and Wildlife…

Prior to European settlement of North America, the Virginia opossum (Didelphis virginianus…) was found only in Central America and the southeastern United States. During the 1900s, its range expanded northward and westward.

Virginia opossums, also known as “possums,” first arrived in Washington in the early 1900s as pets and novelties. Some of these animals, or their offspring, later escaped from captivity or were intentionally released.

The North Carolinians introduced Bluegrass and Appalachian music to the area. Each year the town of Darrington holds a Bluegrass Festival in the summer.

The town of Sedro-Woolley used to hold a “Tar Heel Roots Festival” each year, but that seems to have been discontinued. There were other events that honored North Carolina roots and connections. According to the Sylva Herald article…

…the folks who left here for there kept their culture intact for a number of years and maintained close family connections. Many families in the area still celebrate their reunions on the same day the family in Jackson County does. In Skagit County, they used to have events called “Tar Heel Picnics” where they played bluegrass music.

Along with the music the Tarheels introduced clogging. Here it picked up the name “Tarheel Stomp.” According to the Skagit River Journal the Castle Tavern in Sedro-Woolley had a plaque that read “Home of the Tarheel Stomp.” More on that in a bit.

There are other vestiges of Tarheel life in Skagit and Snohomish Counties. I came across several local obituaries that mentioned Tarheel roots. One mentioned that the deceased was well-known for her “Tar Heel beans,” a delicacy I found referenced in several other places. I’ve never heard of Tar Heel beans. As with clogging, it could be a dish with which I’m very familiar that has just been given a new name. (Although beans and clogging might go together in a different sense.)

Of course, the biggest culinary contribution the Tarheels brought was moonshine. Duff McDaniel told me about a co-worker who would make regular trips to the hills above Hamilton to get his ‘shine. When he thought Duff was old enough, he brought him along and gave him a sample. Other, like the Rev. Chester Mitchell, who was pastor of the Northwest Missionary Baptist Church in Hamilton said in a 1977 article in the Port Angeles Daily News that he had learned to “…make whiskey and build a still before I was knee-high to a duck.” 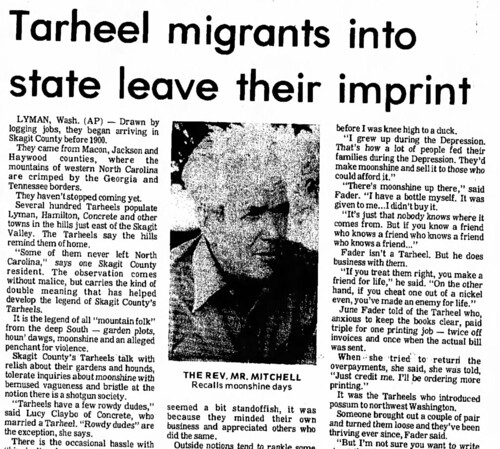 As usual when I come across a story like this, I like to try to find evidence of these Tarheel settlers myself. I visited the Sedro-Woolley Museum, where they had an impressive exhibit on logging. There was an equally impressive collection of cameras and salt and pepper shakers – somewhat random. They also had a life-sized (?) wood carving of Bigfoot outside. 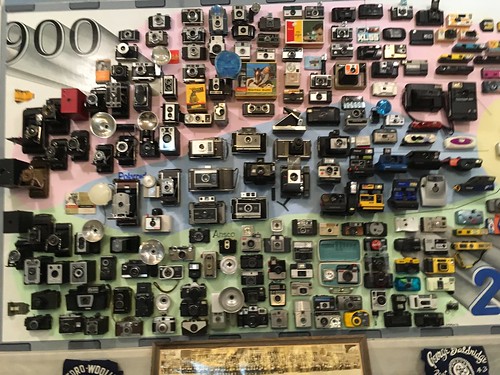 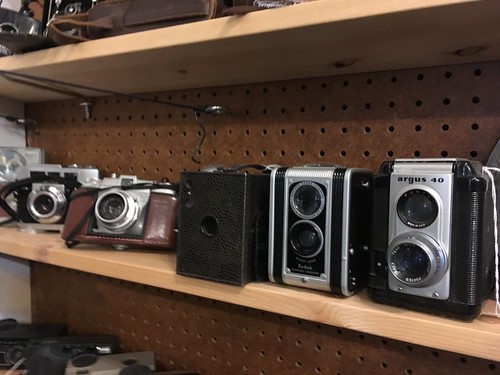 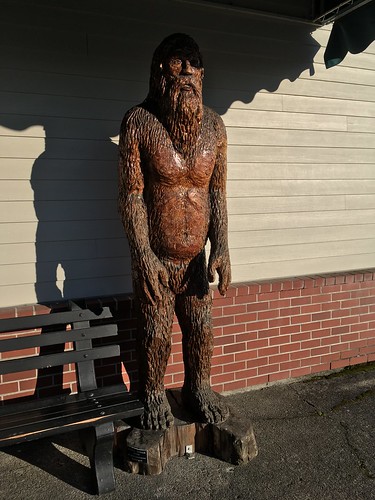 What they didn’t have was much information on North Carolina migration. I asked the docent on duty, and he was unfamiliar with the topic. Oh well.

I also decided I wanted to find the “Home of the Tarheel Stomp” sign, if it still existed. The Castle Tavern has undergone several transformations over the last couple of decades. Just recently it underwent a seven month remodel and reopened as the Iron Mountain Bar and Grill. It had only been open for three weeks when I dropped by for lunch one day. 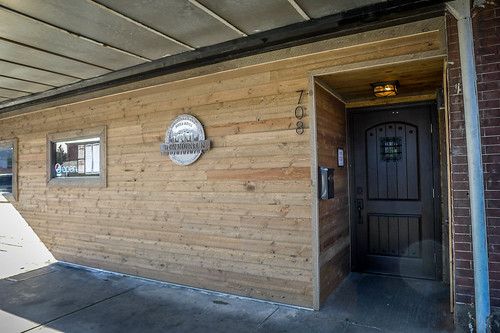 The place was sparse, and a true bar. There were a few tables, a couple of pool tables, and a couple of dart boards. Though it was only 11:30 a guy came in and ordered a whiskey for himself and vodka and water for his daughter. 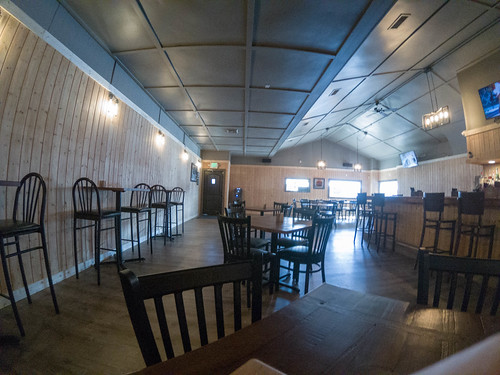 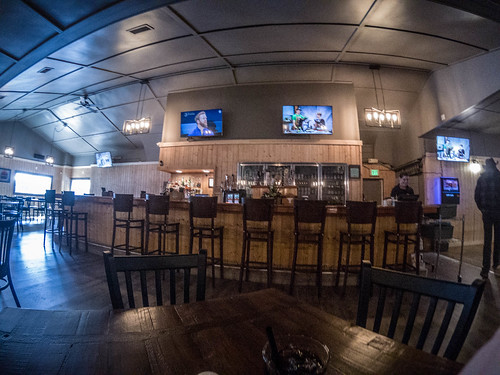 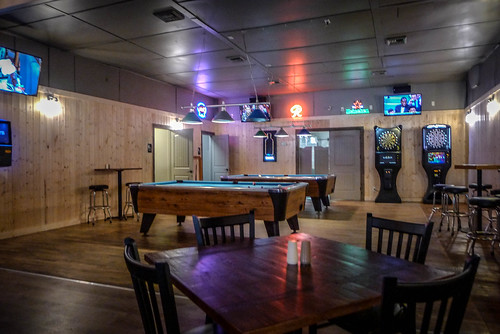 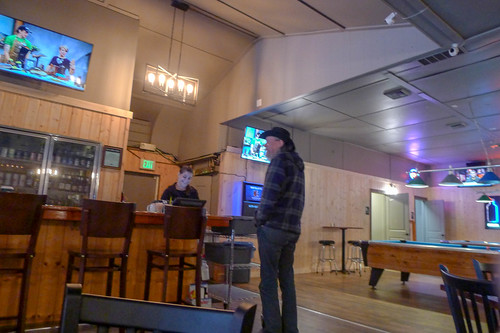 I opted for a Diet Pepsi and a pulled pork sandwich, which turned out to be quite good, as well as reasonably priced.

I asked the waitress about the place and the sign. She, in turn, asked the owner, who said she knew about the sign, but it was long gone. Oh well. The waitress gave me a bit more info about the place. She said that when the pool tables are now there had been elevated dance cages for go-go girls. The former Castle Tavern was apparently a wild place, where one might “get a knife in your gut if you weren’t careful.”

As I had my lunch several others wandered it. It was obvious that these were patrons of the former establishment who wanted to see what changes had been made. Most of them ordered hard liquor. I wonder how long it will be before this is once again a place where one has to watch one’s back.

My experience at Iron Mountain Bar showed me that some things don’t change, whether they came from North Carolina or some other place doesn’t matter. As with any other place in the US, this is a melting pot where the North Carolina culture melds with local culture and takes on a life of its own. It’s just fascinating to recognize those attributes in a new location. 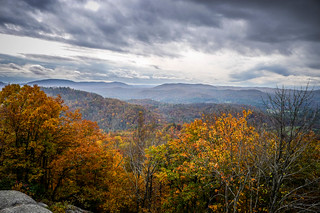