It’s Restaurant Week in Greenville! Participating restaurants offer several courses on a limited menu, usually at a fixed priced per person. Overall it’s much less than if you had selected the same options from the regular menu. This is an excellent opportunity to get out and try new places around town, and perhaps discover a new favorite restaurant.

Laura and I browsed through the participating restaurants, trying to decide on a place for Friday evening. Finally we settled on Passerelle Bistro and made our reservations.

Located at one end of the Liberty Bridge with a spectacular view of both the bridge and Reedy Falls, this cafe started out as the Overlook Grill. It was a popular spot for many years, and we enjoyed many visits. A couple of years ago the grill was purchased by Carl Sobocinski’s Table 301 restaurant empire. The location was remodeled, and re-opened as Passerelle. According to the restaurant’s website, the French word “passerelle” means “footbridge,” which is appropriate for the setting.

Glynda and I had lunch hear back before the holidays, so I’m going to to combine some of those experiences with our meal from Friday night in this review.

The overall look and feel hasn’t changed since my first review of Overlook back in 2006. The biggest draw is the patio and enclosed area with their views of Falls Park. However, it was chilly and threatening rain on the Friday we arrived, so we sat inside. The restaurant is small, with a long counter overlooking the cooking area and a small bar. 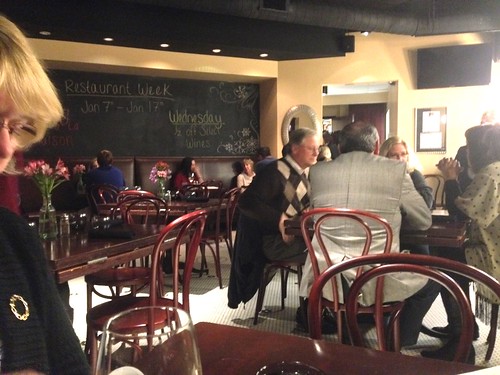 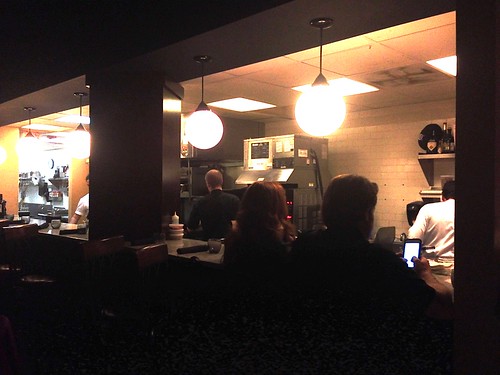 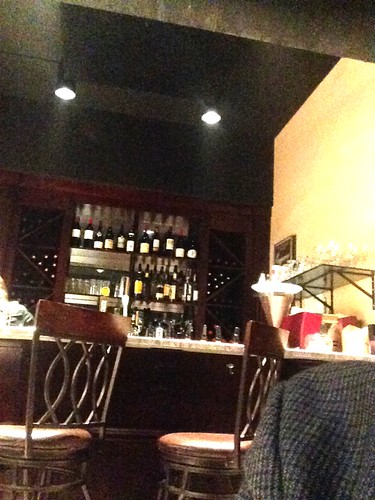 The restaurant is done up in black and tan, with one wall covered with a blackboard showing the specials.

The clientele looked mostly professional. Given the prices this is more for a special night out, and that’s reflected in the type of folks surrounding us. The place was busy, but wasn’t packed.

Laura and I really enjoy watching the cooks at Tupelo Honey and at Soby’s. We were almost wishing that we had been seated at the counter to watch the ballet of cooking going on there.

The menu changes according to the whims of the chef, but there are a few standard dishes, mostly focusing on French cuisine. For lunch there are small plates, aka appetizers, anywhere from $8-$10. These include cheeses, soup, and quiche.

The dinner menu has similar small plates and salads, but with options expanded to include escargot and calamari. You can also get mussels two ways. Prices are a couple of dollars more on the dinner menu.

For entree’s there are a variety of proteins, including chicken, flank steak, pork chops, trout, and rack of lamb. Each of these are accompanied with appropriate sides. Prices range from $17-$27. There are several dessert options starting at $8. Of course, there is an extensive wine list and full bar.

For tonight’s Restaurant Week Menu we were presented with a choice from three appetizers – escargot, beet salad, or garlic shrimp. The entree choices were mountain trout, a vegetarian Moroccan Tangine stew, or flank steak. Our prix fixed of $30 per person also included a choice from three dessert options – apple tart, creme brule, or a flourless chocolate tart.

Glynda ordered a braised lamb sandwich, and I ordered a chicken salad sandwich. Glynda’s sandwich was fantastic, very reminiscent of the Moroccan Lamb that we always get at The Lazy Goat. It stands to reason that they would share similar flavor palates since they are both part of Table 301.

My chicken salad sandwich struck me as overly ambitious to be truly good. There was a huge hunk of brie on the salad. I love brie…by itself or on crackers. However, I think the sandwich would have been best served with the chicken salad on its own, sans brie. Really, though, that’s a minor quibble, and it was quite good.

For our Restaurant Week dinner, Laura and I both ordered the garlic shrimp. Given the similarities between Glynda’s lamb and the Lazy Goat recipe, I was wondering if there were be similarities with LG’s garlic shrimp. It was very different. The flavors were quite, but I think I like LG’s better. I did enjoy dipping the bread pieces into the shrimp sauce. 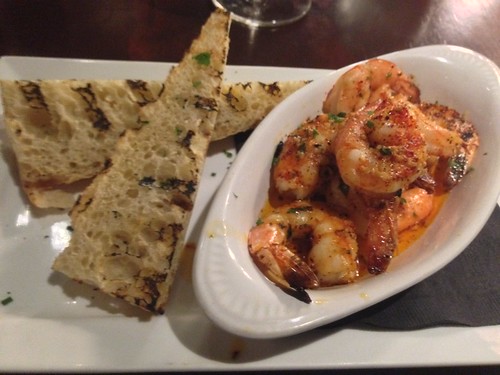 The portions were quite generous, and Laura and I could have shared an order. I would have gotten one of the other appetizers so that we could share, but I wasn’t interested in the beet salad, and Laura won’t touch escargot. (For the record, my nephew Chip and his wife Anna were there Saturday night, and Anna raved about the escargot.) 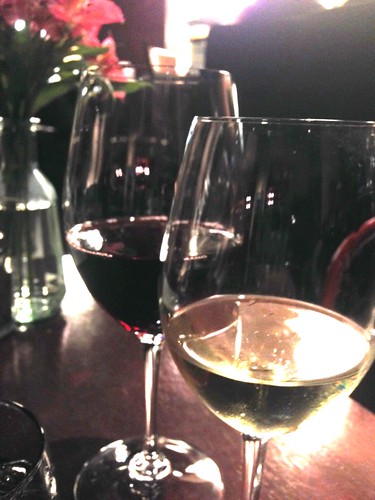 For our entrees we both got the flank steak. Again, both of us had quite a bit of seafood lately, so we weren’t keen on the trout, and the vegetarian option looked good, but wasn’t of interest. Even so, we were quite pleased with our choice. The steak was accompanied with fingerling potatoes and Hollandaise sauce. As tasty as the steak was, the potatoes and sauce were the true stars. It was all excellent. 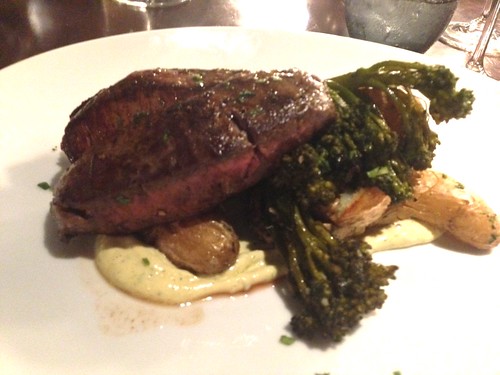 Dessert was where we diversified. Laura opted for the chocolate tort, and I went with the apple tart. Laura’s dessert was fantastic. There were bits of cherry hidden throughout, and it was topped with whipped cream. We could have easily shared the dessert. 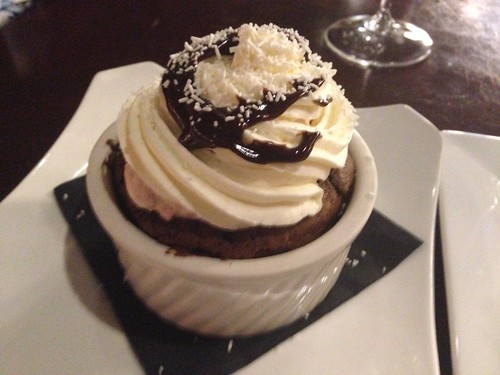 My apple tart was also quite good. The spices and flavors were excellent. If I had any complaint, it’s that the peels were left on the apples, which made it difficult to cut and eat. I think I would have enjoyed it even more if the peels had been removed. Again, it was far too much for one person. 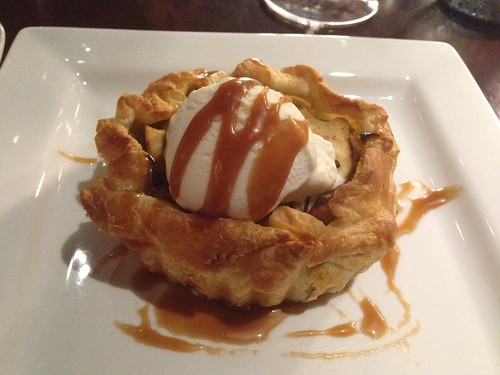 Our server, Rachel, was also the bartender, since we were seated right next to the small bar. As such, we were probably her only table besides tending the bar. She was quite knowledgeable and took good care of us. I also had several questions about drinks, which she answered with patience. Service was as commendable as the rest of the meal.

I was initially worried when Overlook Grill closed. However, it looks like Table 301 has made an excellent comeback with Passerale Bistro. The setting will always be a strong draw. Prices for lunch seem quite reasonable. Dinner is great for a special night out, especially if you share an appetizer (or skip it) and share a dessert. The flavors were fantastic. I do highly recommend it.