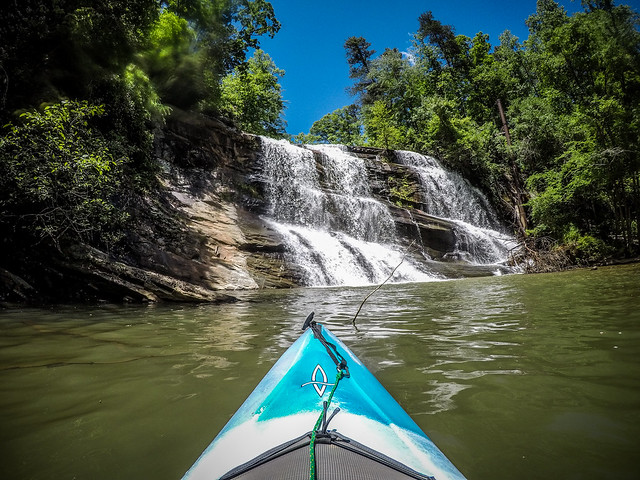 Of late my life has taken own the following pattern, at least as far as my car is concerned – Unload music gear. Load kayak gear, Unload kayak gear. Load music gear. Rinse. Repeat. In the past couple of weeks I’ve kayaked nearly 40 miles and played with six music gigs, NOT counting my regular church gig. There’s been more doing than writing, so I’m far behind with my blogging.

Several weeks ago someone posted photos of Longnose Creek Falls on Facebook. I’d only become aware of these falls in the last year or so, and these recent photos were quite compelling. The falls are on private property, but you can get to them from Lake Hartwell by paddling up Longnose Creek. Of course, water levels have to be just right in order for you to reach them.

The closest access point is Stephens County Park on the Georgia side of Highway 123. From there it’s a couple of miles up to the creek. The person posting the photo said that they found a wide spot on River Road and just did a throw-in launch, which shortened the trip considerably. I opted for that strategy, as well.

When I reached the target area my strategy made even more sense. It was quite windy and there were small whitecaps out on the main lake. Battling that for a couple of miles would not have been pleasant. Unfortunately, it would also make things a bit rougher for launching, especially from an iffy bank.

I checked out a couple of wide spots with lake access. Most of these were just access for fishermen and were too steep to haul or launch a boat. Finally I found a place just on the other side of a guard rail where River Road crosses a cove. It wasn’t ideal, but it would work.

As I was launching, somehow I managed to get my foot caught in the kayak, lost my balance, and planted my butt in the water. The boat filled with water and I had to use my bilge pump to empty it enough so that I could lift and dump the rest. I felt foolish making a rookie mistake like that. Oh well.

Once I was finally on my way the paddling wasn’t so bad. There were a few bumps from wind and waves, but nothing I couldn’t handle. Apart from the wind, the weather was spectacular.

I guess I was rattled from my false start because I didn’t bother to look at my GPS once I got underway. I paddled under a bridge and into a cove I assumed to be the entrance to Longnose Creek. There was a house at the top of a wide, cleared field and the area was bordered by farmland.

I checked out all of the nooks and crannies around the cove, but there was no passage leading away from the lake. I knew I was in the wrong spot. It was at this point that I checked my GPS to see that my true route was around a point about a half-mile away. I really wasn’t on my best game.

I paddled back out of the cove and onto the lake. At this point Hartwell is more like a wide river than a lake. A nascent island has developed in the middle of the route with vegetation separating the Tugaloo River from the rest of the lake on the eastern shore. I knew that there was a somewhat hidden entrance to the creek through this vegetation.

At first I tried to hug the bank, seeing if I could sneak in that way. The route was blocked, but I did see an interesting fishing chair on an old cedar stump.

The actual entrance to the stream was exactly where I had marked it on my GPS. The route led through a bit of brush, then under a bridge on River Road. A bow-fisher was standing on the bridge looking for prey.

Beyond the bridge the route opened onto a canopied stream. The area was covered with white fluff, possibly from cottonwood, but definitely from the trees lining the stream.

Even without falls the scenery along this stretch was stunning. At these water levels there wasn’t any noticeable current, so it was an easy paddle. Mountain laurel bloomed along the banks. The canopy of trees reminded me of the cypress swamps I’d paddled recently.

I could hear the falls long before I saw them. The stream approaches from the right, as it makes a sharp left at the bottom of the falls. I was really taken by surprise as the size and amount of water, and was wondering why I’d never heard of these until just recently.

To the right of the falls were the ruins of some structure, possibly Humphrey’s Mill. A tall pipe stood next to the fall. My guess is that it diverted water from the top through the mill.

I couldn’t find any information about the mill itself, but I was able to find an undated photo on the Oconee Waterfalls website that shows the mill still standing.

Apparently the correct name for the falls is “Fountain Falls.” I didn’t know this until later, but there is a geocache at the falls that had some additional information about the mill.

The mill has special significance to me because my great great grandfather once owned the mill back when it was in operation. The grindstone and part of the foundation is still visible. Across the creek, you can see the miller’s cottage (which is on private property so please do not go up to it). You can see the two fireplaces, the top one was for the living room and the bottom one was used to make corn liquor.

It looks like the last time the cache was found was in 2016, so I doubt it’s still there. There were two more DNF logs from 2018.

Across from the falls is a small cove with a lovely beach. I backed into it to get the best shots of the falls, all the while thinking that it would be a great place to hang out and swim. What I didn’t realize was that on the hill overlooking the beach was a massive concrete house hidden in the trees. It almost had a Frank Lloyd Wright “Falling Waters” vibe to it.

This is one of those spots where I’d love to bring my hammock and just hang out for a few hours. One of these days I’m going to have to do that. Sadly, I had to get back home. I paddled on back, taking the most direct route this time. I was able to get out of the boat without spilling this time.

Here’s the time-lapse of the trip. I started it AFTER my initial spill.

This trip is a keeper. I’m guessing that if the water levels drop on Lake Hartwell as they have in the past, the falls will be inaccessible. But for now it makes for an easy paddling trip. I would like to find a cleaner put-in, though.

I decided to check the 1825 Robert Mill’s Atlas of Pendleton District. It showed old mills, and I was curious as to whether or not Humphrey’s was old enough to be on it. The map does show Humphrey’s…right where GNIS has it on Gryer Branch rather than on Longnose Creek. The mill on Longnose is identified as Holdin’s Mill. I was still unable to find information about it, though. I may inquire the next time I’m at the Oconee Museum.