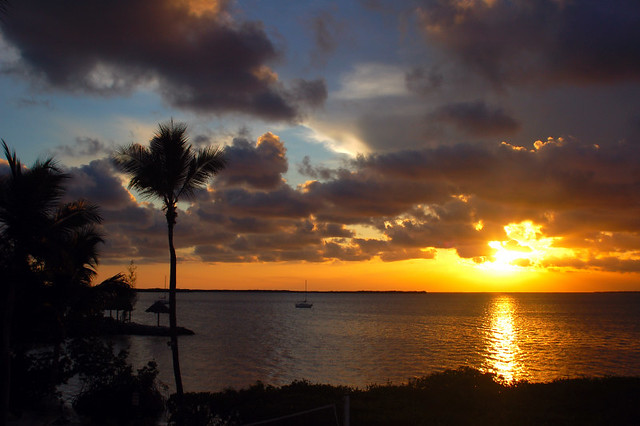 Ongoing issues with Laura’s mom’s Alzheimer’s care meant a sudden trip to Florida. Laura caught an immediate flight on Friday, but it was a concert weekend for me. So Monday morning I loaded up the car with cameras, computers, paddling gear, and musical instruments, and headed down. Here’s what happened Tuesday…

I awoke suddenly, feeling like something was profoundly wrong with the universe. I had collapsed early after driving all day and having a martini. I awoke thinking I had slept an entire night already. It was an irrational anxiety that kept me awake. I turned on the Celtic Radio station on Pandora. Rather than put me to sleep, my mind analyzed the melodies, jigs, and reels, thinking about how I might play them on my new melodica.

Sleep deprived, I go in search of coffee. The tank on the Keurig is low and needs refilling. A large jug of Tanqueray gin sits next to the machine. In my sleep-deprived, caffeine-deficient state I almost have a very interesting cup of coffee.

Laura and I head down to Port St. Lucie to visit a skilled nursing home as an alternate care facility, just in case we have to make a move. The place is friendly, but clinical. Everyone smiles – the staff, tour guide, and residents. A line of wheelchairs waits to roll into the dining room for an early lunch. The smells of home cooking and soft foods toy with my taste buds.

We arrive at Sunset Cafe in Vero Beach in search of sandwiches. The place is filling up with locals, a slightly more mobile version of what we just left in Port St. Lucie. A lone waitress scurries between the tables, getting orders wrong.

After nearly 45 minutes we still have no food. We’ve managed to get one refill on our sodas. Our waitress comes out to tell us that “the machine jammed and we lost your order.” The last time we were here a few weeks ago they gave our order to another table. Two strikes, and no more for this place. After loudly voicing our dismay we stand to leave. We pay $5 for the two sodas. Basically, we rented a table.

We were able to get a sandwich in Vero Beach at a Panera Bread with much less drama than the first place we tried. We arrive at Harbor Chase ahead of a storm. I leave the instruments in the car, and we go on in to say hello to Laura’s mom and her caretaker, Nedrah. The four of us head out to the commons room, turning the opposite direction from a male resident who has decided it’s best to be nude from the waist down.

Harbor Chase is temporarily short-staffed due to some recent changes, and facility director Phyllis is valiantly trying to keep the inmates entertained on a rainy day. I have flashbacks to my days as a fourth grade teacher when we have indoor recess. Phyllis catches my arm and says, “Please tell me you brought your banjo.”

It’s storming outside. Phyllis is asking the inmates trivia questions, usually some sort of fill-in-the-blank for a movie or song title. I decide to answer every question with the word “burrito.” “Love is a many-splendored…burrito.” “The hills are alive with the sound of…burritos.” Laura scowls at me.

The storm has let up a bit. Phyllis’s eyes plead with me to go get my banjo, so I head out to the car. Laura continues to answer trivia questions with the word “burrito” under her breath.

I bring in the banjo and melodica and get set up. The strings are hard to tune, having come from heat and humidity of the car into the air-conditioning. I play anyway, quickly exhausting my limited repertoire. Mrs. Wright claps along. The whole crowd is very forgiving. I pull out the melodica and play a couple of tunes. The inmates let me know quickly that they prefer the banjo. At least Phyllis gets a brief reprieve. She truly does care for the group, and is trying to keep things together during this difficult time.

Peter the Piano Guy shows up. He’s quite talented, and plays a combination of old standards in a ragtime style. He can play anything, as long as it’s in F# major. I grab the melodica and play along, discovering that I know bits of melodies from lots of songs, but very few complete songs. Even so, Peter and I have a good time, and the inmates seem to like what they are hearing. Yet, they are getting tired.

It’s time for Peter to go upstairs to the assisted living group. I had played banjo for that group several months ago at Phyllis’s request. He invites me to tag along and continue our collaboration. I hesitate at first, but after checking in with Laura and Mrs. Wright I head on up.

Peter is already banging away. When he spots me he waves me over and introduces me. I pull out the melodica and we make a terrible discovery. This piano is tuned an entire half-step flat compared to the one downstairs. There is no way to tune the melodica to it. I demonstrate a couple of melodies on it, then put it away.

We pull out the banjo and I attempt to retune the banjo to the piano and Peter’s open F# chord, but with limited success. My playing style (rudimentary, 3 chord) doesn’t match his at all (jazz, all over the place.) These residents function at a much higher level, and are therefore much more demanding of musical excellence. After a few more awkward moments I give up and head downstairs to find the Alzheimer’s group doing Zumba, which is appropriate for neither banjo nor melodica.

Amy is working late and going out to dinner with some equipment vendors. That leaves Laura and me alone for dinner. We decide to check out the Square Grouper in Fort Pierce. The original Square Grouper was the setting for Alan Jackson’s “Five O’Clock Somewhere” and this second location opened in the past year.

There are few cars. It’s raining, and the place is basically an open space for bands and drinking, with a small covered area over the bar. A sign reads “21+ Only. No Dogs. Don’t even joke about it.” Joking about dogs…or age? Who knows?

We head over to the bar and take seats with a view out over the inlet. Behind the bar a young brunette with her hair in a ponytail and wearing short shorts and a tight tank top comes over and says her name is Brittany. Of course it is. We order one round of drinks and conch fritters and Brittany proceeds to ignore us for the rest of our time here.

For the second time today we enter one restaurant but somehow don’t manage to eat a meal there. The fun lively crowd captured in video by Alan Jackson and Jimmy Buffett just aren’t going to materialize on this rainy evening. The fritters and drinks are OK, but expensive, and the whole vibe seems off. Nothing else on the menu really leaps out. The final straw is a waft of cigarette smoke from the other side of the bar.

We arrived at On the Edge, one of our favorite Fort Pierce dives. It’s not crowded, and we find a covered table under the tiki bar with another view of the inlet. We don’t order any additional drinks, but dinner this time.

As we wait for our food a man at the bar orders a beer and loudly proclaims that he has just had a song copyrighted today. Can he go get his GUEE-tahr and play it for us? No idea if he’s serious.

Laura has coconut shrimp and I have jambalaya. Mine is excellent. As we’re finishing up the GUEE-tahr dude arrives. He pulls out said instrument and proceeds to sing. “If you don’t like the life I’m living, you just leave this long-haired country boy alone.” Laura is appalled that I know the words and can sing along. Neither is she happy when I suggest that I can go get my banjo out of the car and play along with him. Just as well. I’d need to retune the banjo…again. 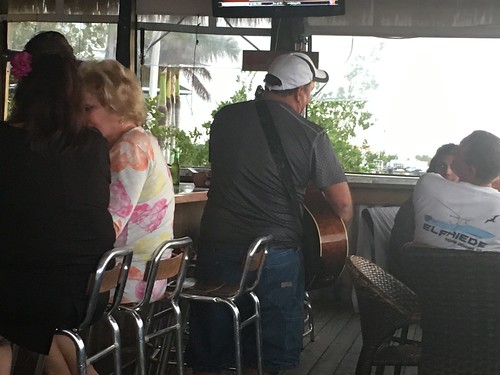 GUEE-tahr dude follows up with “Grandma’s Feather Bed”, then finally gets to his piece du resistance, his copyrighted masterpiece. It’s a song about Jim and Tammy Faye Baker set to the melody of the Beverly Hillbillies. Copyrighted. Two women at the end of the bar try to ignore him. The dude says, “I must be doing OK. People are leaving.” The waitress comes over and rolls her eyes. The manager comes up the stairs as we also make our escape. She looks over at us and says, “There’s a reason why they call this place ‘On the Edge.'” At least it was entertaining and the food was good.

Jeopardy is on. Laura and I answer the first question with “burrito.” The show seems pale in comparison to GUEE-tahr dude. I didn’t even get to play banjo with him, but he probably wouldn’t have wanted to share the spotlight. But that’s OK. It had been a long day, and once again I was beat. Three nights of very little sleep, medication for gout, and family tensions were starting to catch up to me. I think I’ll sleep tonight, and I might not even need the Celtic music.

I awoke suddenly, feeling like something was profoundly wrong with the universe. 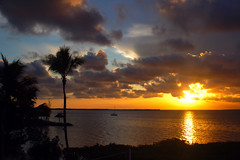