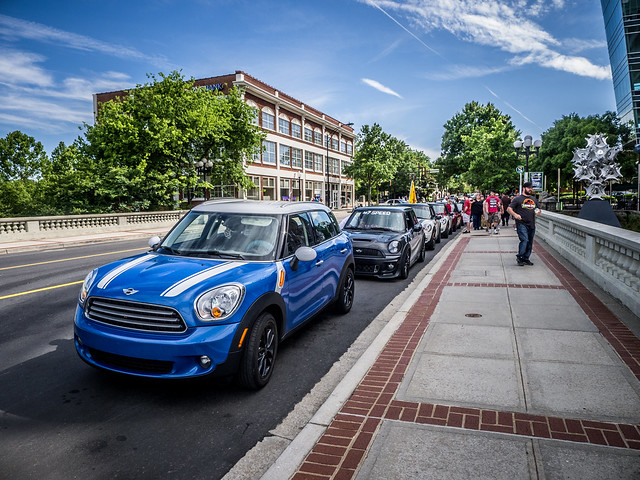 We had really only planned on doing the parade. Last year we had such a blast with the Upstate Minis that we decided to do the parade again. This year, the parade was running in the opposite direction on Main Street. Last year we had lined up on Townes Street and proceeded along Main. This time we were to line up on South Main and head north. A big party would then take place on NOMA Square.

Our call time was 4:00, but the parade didn’t start until 6:00. Laura and I got there about 4:15, and we were the second to arrive Jeff and Sherry Goodman were already there. We pulled our car in front of theirs, which meant we would be next to last in line. 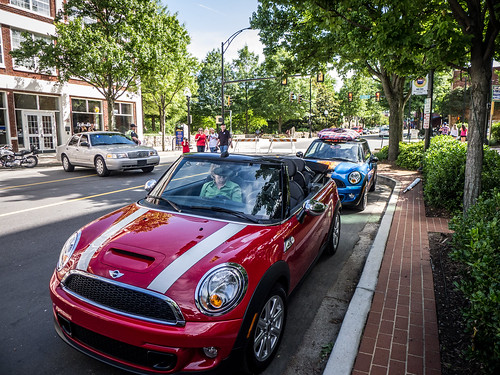 Soon other cars arrived, and we began chatting with the other drivers as we awaited the start time. We parked in the shade of the Falls Park buildings so we had some shade. The other drivers had brought various plaid items to dress up their cars in Scottish attire. We just had our regular racing stripes and the GoPro camera. 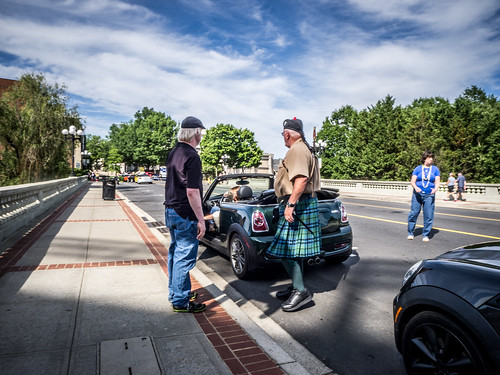 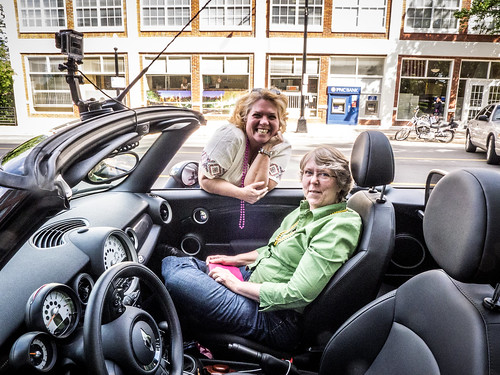 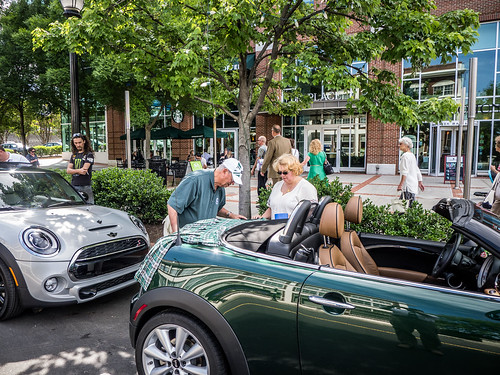 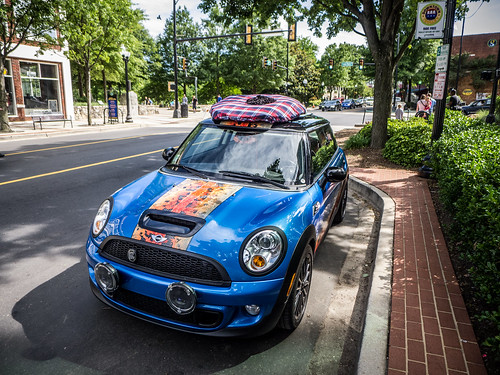 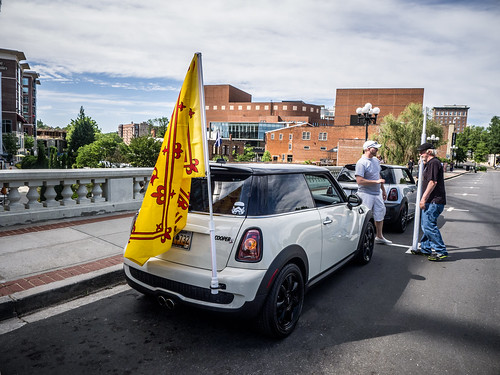 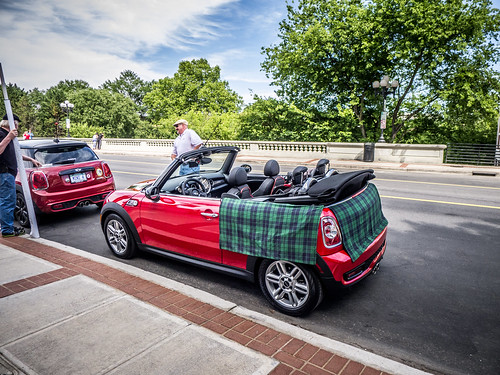 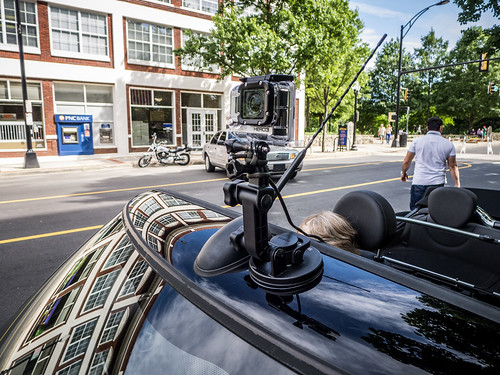 As the time approached, Jeff called all the drivers together for a brief meeting, and unveiled the new Upstate Minis banner that would lead us in the parade. 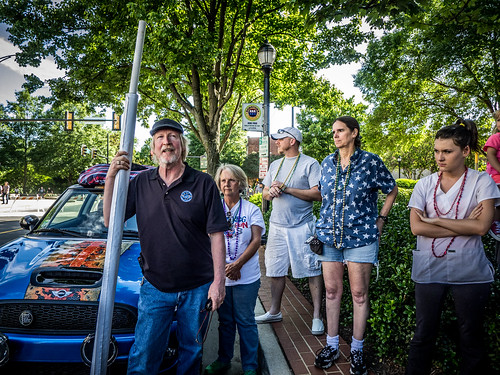 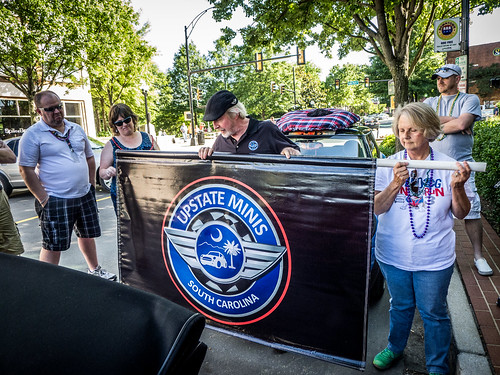 In all, fourteen cars joined our group. I think there were only ten last year, so it was a larger turnout. We moved our cars across the street and closer to the actual start of the parade. There were a few fancier Jags and Porsches trying to show us up. These would carry various beauty queens and dignitaries. 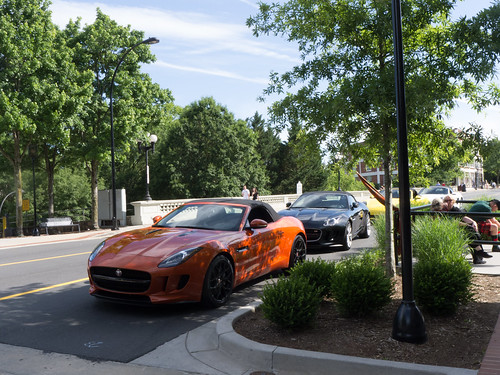 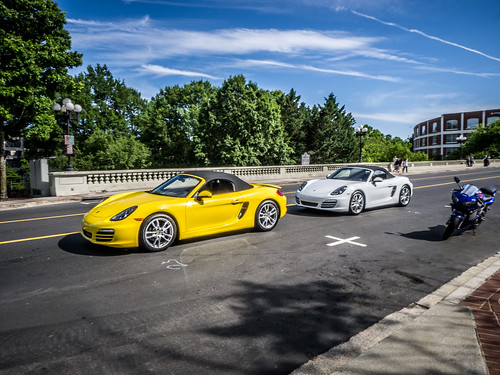 Soon we got underway. Once again, it was thrilling to have a huge portion of Greenville lined along Main Street cheering and waving at you. Most of the crowds were lined up on the left (west) side of the street in the shade. Those on the other side had to look into the setting sun. 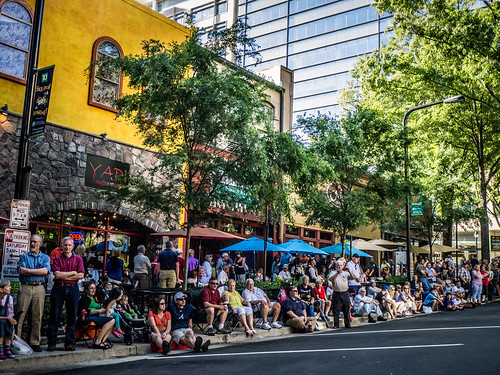 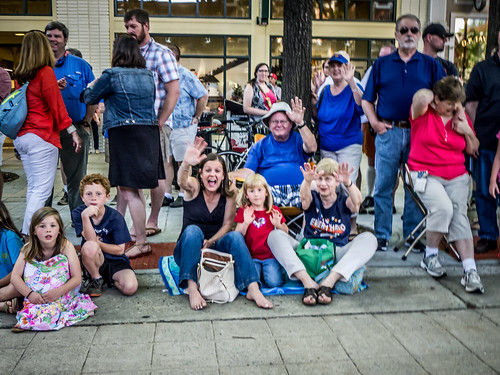 Once again, it seemed that we got more attention because of the GoPro mounted on top of the car rather than the car itself. I heard several shouts of “I want to see the video!” I’ve got video, but haven’t really done anything with it. I’m afraid it would be boring to those requesting it.

The problem with participating in a parade, is that you don’t get to SEE the parade. All we had was a view of the same car in front of us, as picked up by the GoPro. There was a bit of excitement, though, as a bride walked out into the street to have a photo in front of the Minis. Roslyn Ward-Seagraves was driving the car in front of us, and tried to take a photo with her phone, which she dropped. The bride graciously picked it up for her, then proceeded to pose. 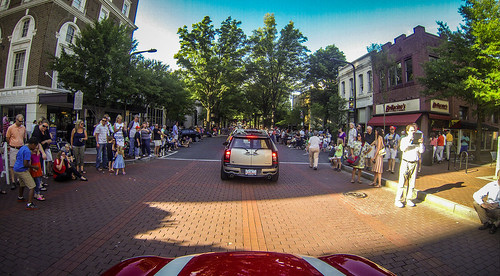 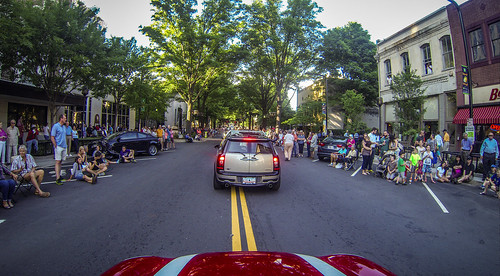 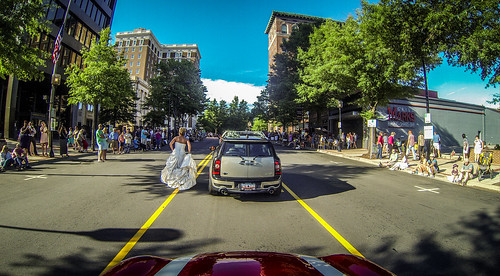 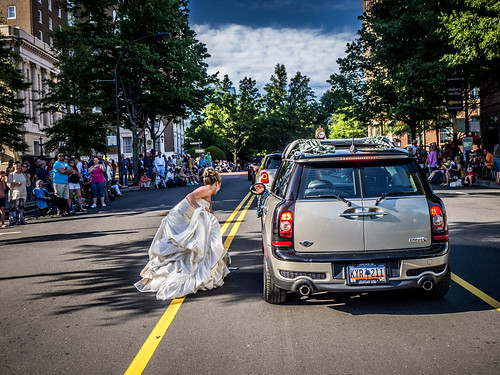 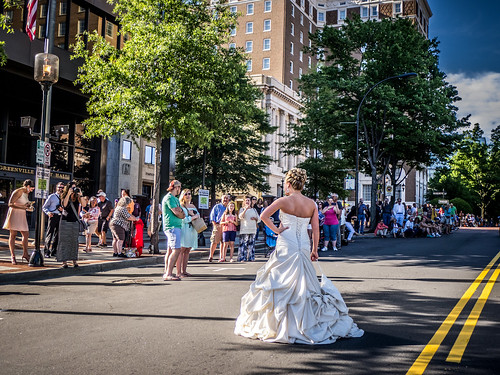 We saw several familiar faces in the crowd. Jeff had stationed himself so that he could take photos of all the cars as they passed. After his car passed, he jumped in as driver. He said it was the first time he had actually ridden in the parade. 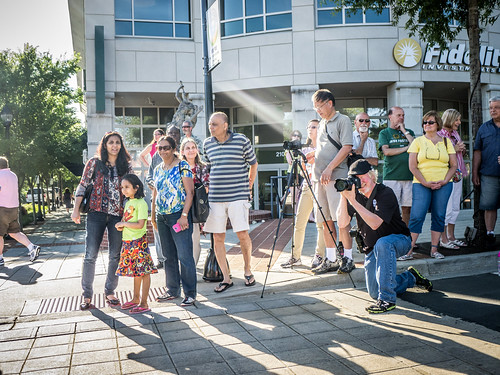 The parade itself seemed shorter for some reason. It was over before we knew it. North Main in front of the Hyatt was blocked off for the party, so we turned onto East North Street. Since we didn’t have any other decorations on the car, all we had to do was take down the GoPro and head off. The other drivers were meeting for dinner, but we opted out this time. Still, it was a great gathering, and I think this may become an annual tradition for us. We even made it onto the evening news (toward the end of this link.)

I took a ton of photos, most of which aren’t shown above. Here’s a slide show of the entire collection: