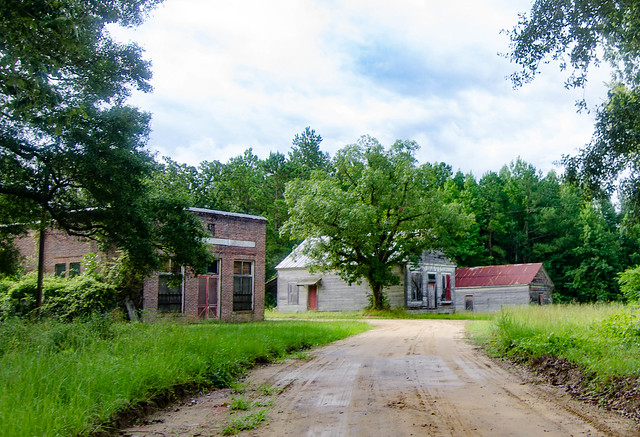 I actually had a couple of reasons for doing this trip at this time. Normally I wouldn’t head to the hottest part of the state during the hottest part of summer, but there was a time crunch. Later this week we would be trading in my venerable adventuremobile for a new one. The Subaru was just shy of 200,000 miles and I wanted to see if I could push it over that edge. This would certainly put more miles on my car.

And since there was a time crunch, I only had one day to explore. I had to be very choosy about my targets and stay focused. There would be some room for serendipity, but it was a long drive just to get to that area. Using my lists, maps, books, and other resources I mapped out several must-see spots along with some secondary targets. The must-see spots included suspected ghost towns. The secondary targets were usually old schools or interesting churches. I also wanted to drop in at the Marion County Museum to see if they had additional information about some of these locations. Even my pared-down list could easily take two or three days of exploration. I had one.

Everyone has heard of “fly-over states.” The targets I had selected were in “drive-by counties.” These are the counties one drives by quickly in order to get from one population center to the coast, in this case, Myrtle Beach. They include Florence, Lee, Marlboro, Dillon, Marion, Chesterfield, and even parts of Horry. The counties are mostly agricultural, but they are loaded with the types of things that interest me – remote swamps, winding rivers, old churches and cemeteries, and lots of history.

The drive to my first target would take a little over three hours. I got an early start and headed south toward Columbia, then onto I-20 and eastward to Florence. When I got to Florence I debated taking the cross-country route, but that would probably provide more distractions and keep me from a timely arrival at my goal. I stuck to the main Myrtle Beach route. I crossed the Great Pee Dee and passed through the interesting community of Midway. I by-passed Marion, then turned onto Highway 41-alt through the community of Centenary. I knew I’d be passing back through this area, so I made a note of places to stop, many of which were already on my list. Finally I made it to my first target.

Ella’s Grove has been a target on my list of ghost towns for a long time. I’ve seen lots of photos online. These show a small commercial center on a dirt road. It looked like the quintessential South Carolina abandoned town. I knew I had to pay it a visit.

Benjamin Franklin Davis was a Civil War vet who settled in the area in the mid-1800s. He named his small plantation “Ella’s Grove” after his wife, Gabriella. After the war he opened a small general merchandise store to serve the community. The store prospered, and his son, James Clement Davis, took over the operation. In 1915 James built a new, larger brick building for the store. He ran the store until he retired in 1952 at the age of 92. In 1975 the Florence Daily News featured an interview with Guy Davis, the then-current proprietor of the store and descendent of B. F. Davis. The 1975 article gives this history of the store:

The business was founded on Jan. 1, 1867, by B. F. Davis, the grandfather of the [then] present owner, a few miles east of the present location at Dog Bluff on Little Pee Dee River. There was no railroad transportation in the area at that time, and roads were poor, so supplies for the store had to be brought up the river on barges. A few years later, however, land transport had improved, and Davis moved his operations nearer to the population center of the community, to the present site.

I don’t have an exact date for when the Davis store closed, but I suspect it wasn’t too much longer after the 1975 article. Three buildings now occupy the site – the original wood frame store, the 1915 brick store, and a wood frame storage building. Several farm houses, including the original Davis house, sit nearby.

When I arrived at Ella’s Grove the skies were overcast from a receding summer storm. I spotted the row of buildings off of the main highway on a dirt road behind a wooded area. I drove past first, then turned on the the dirt road, approaching from the south. 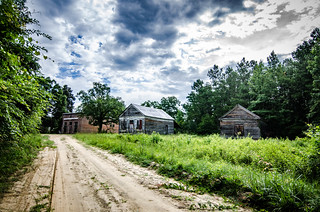 It certainly did have a “ghost town” feel to it. I pulled on up and took a few more photos. B. F. Davis’s name was still visible on an old sign on the original wood frame store. 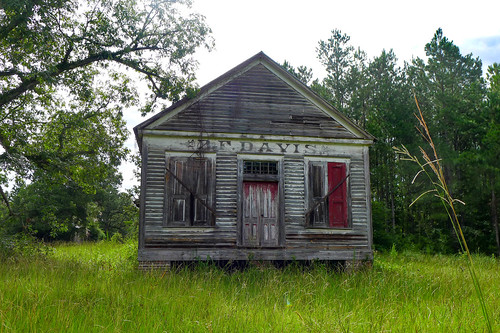 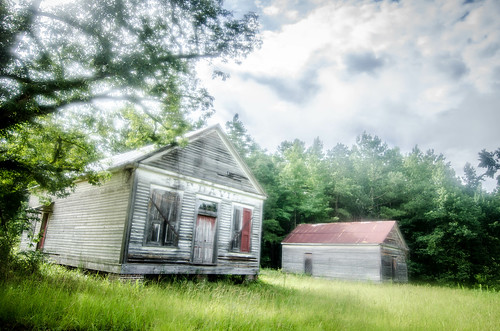 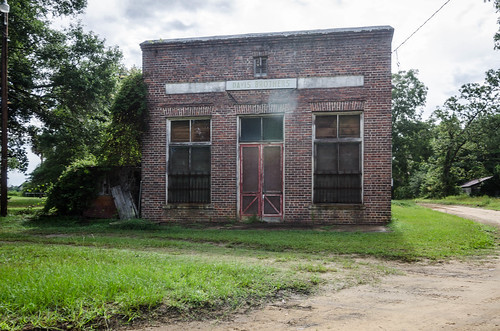 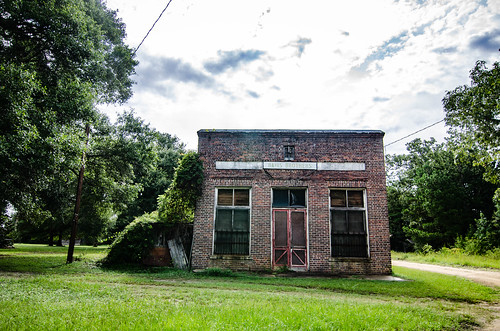 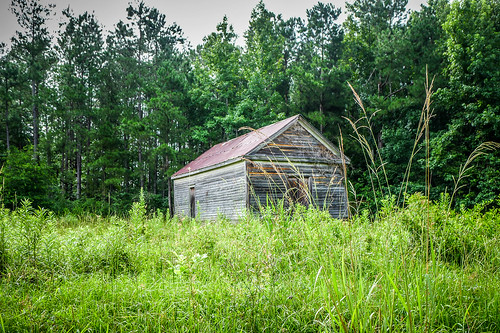 Knowing the history of the area, I began to wonder if this small set of store buildings really qualified as a ghost town. There was a post office here, but according to Carolana.com it was only in existence from 1858 until 1866, before B. F. Davis even established his store. There was neither church nor school associated with Ella’s Grove, although there were some not far away. There was no municipal infrastructure at all. Basically, this was just one family’s store on their own property.

Even so, there is something haunting about the stretch of old buildings on this remote dirt road. There is a story here, and I think that even though it lacks certain qualifications, I’ll include it with my list of ghost towns.

Less than a mile up the road, at the intersection of Highway 41 and 41-alt, is the old Palmer Cemetery and Palmer School. 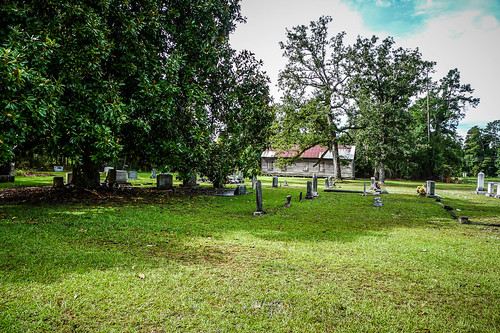 The Palmers were early settlers in this area and designated this piece of land as their family burial plot. A granite marker at the front of the cemetery states that it was established in 1841 by David Palmer and his son-in-law, William Richardson. The marker doesn’t mention the school or an associated church, but SCIWAY.net states that Palmer and Richardson also established a Baptist church, and that this was the cemetery for the church. GNIS data didn’t indicate a church at this location, so I’m depending on the information from SCIWAY. 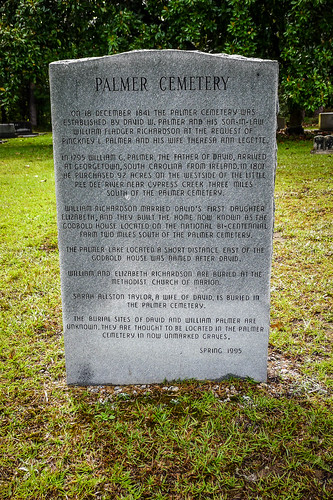 As I wandered around the cemetery the most prominent name was Davis. I found the graves of Benjamin Franklin Davis and Ella Davis, of Ella’s Grove. 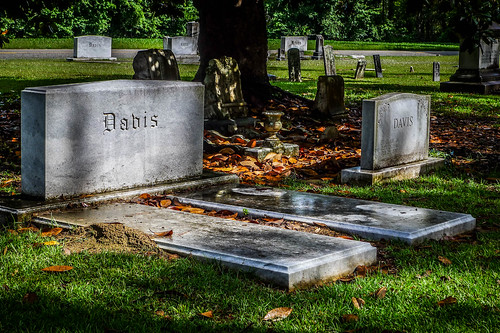 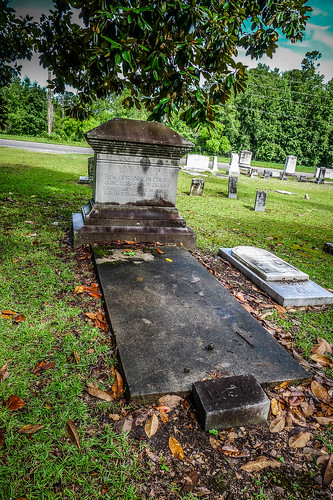 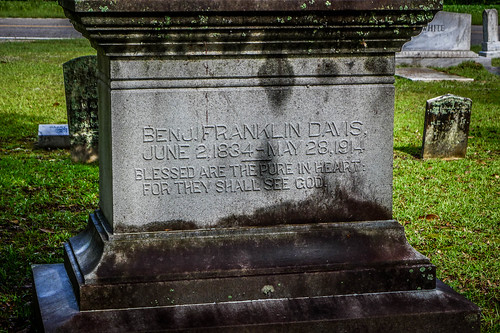 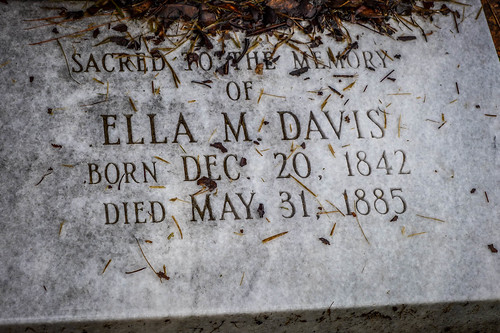 The most imposing tomb is that of James Clement Davis, who increased the Davis enterprise. His grave is in a brick vault with an unusual ziggurat roof. Birds had built nests on the concrete roof and there was a mess on the slab graves below. I didn’t investigate. 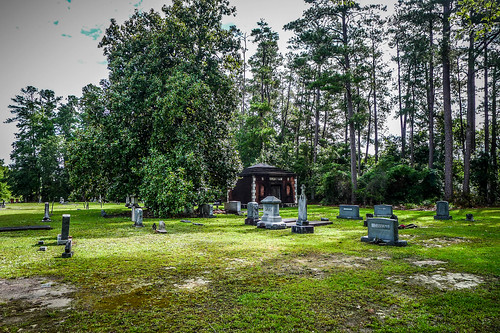 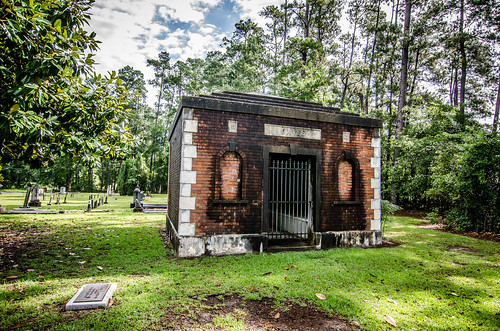 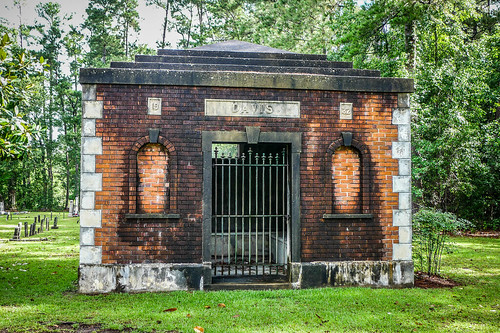 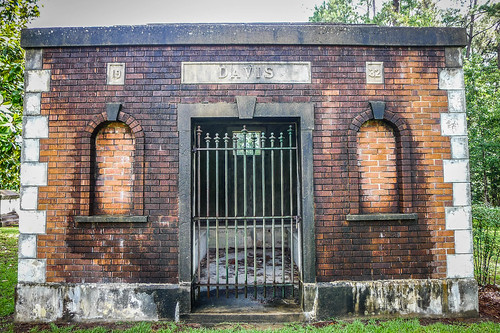 There were other historic graves, some dating from the mid to late 1800s. I didn’t see any signature stones as I walked through. It looked like some older graves had newer stones added as the older ones became illegible. That appeared to be the case with B. F. and Ella Davis. 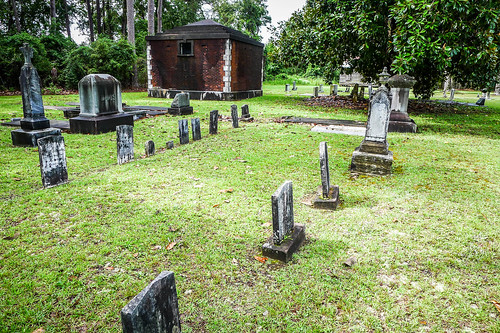 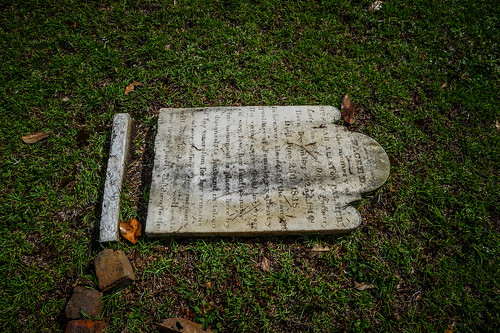 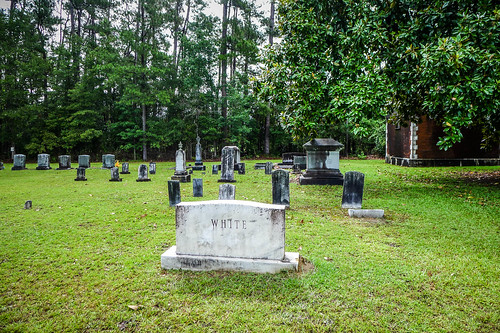 The school is a simple single-gable structure with two small rooms. It was built in 1870 and classes were ungraded. It began as a school for white students, but later resources list it as a black school.

Regardless, it was very rustic. I can only imagine what school would have been like here. According to my resources, this is the oldest school building remaining in Marion County. It closed sometime after 1920. 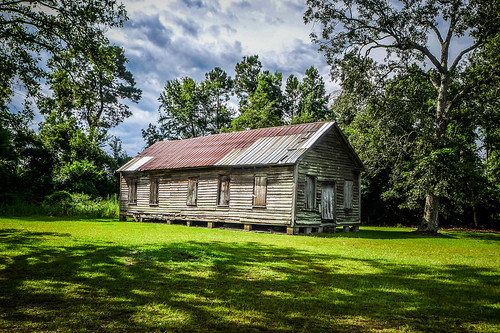 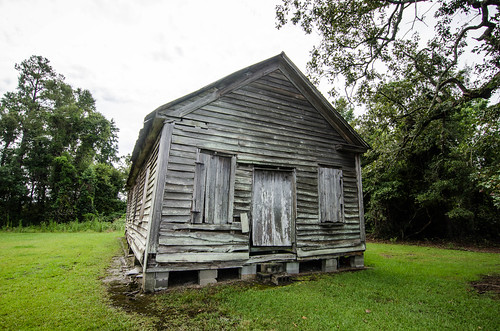 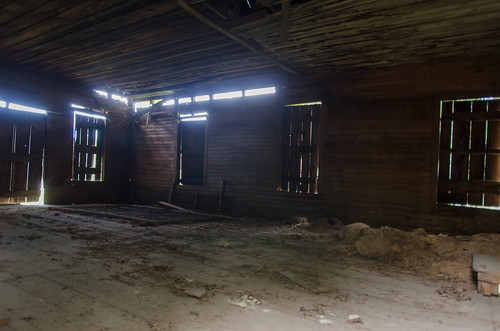 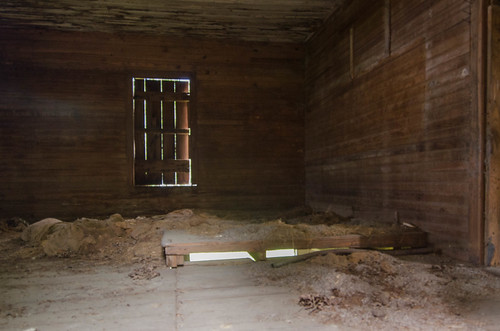 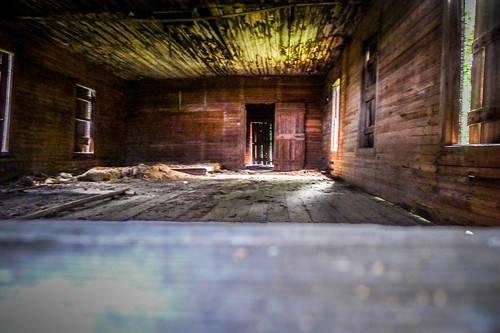 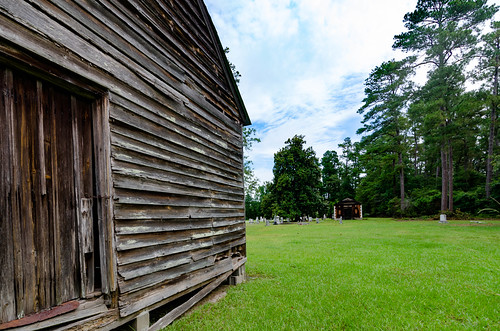 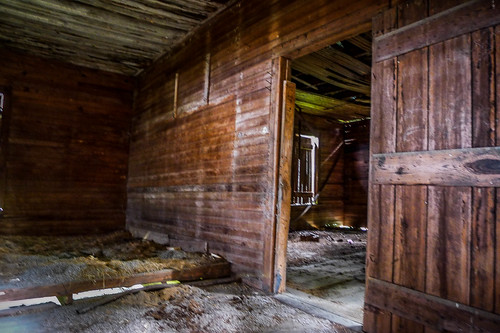 I had lots more to see, and each one of those deserves attention. So, I’m breaking this into multiple parts. Next up, I visit the community of Centenary and try to figure out if it qualifies as a ghost town or not. 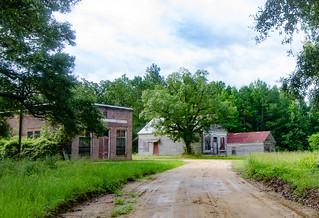 One thought on “Ghost Towns of the Pee Dee – Part 1, Ella’s Grove and Palmer”