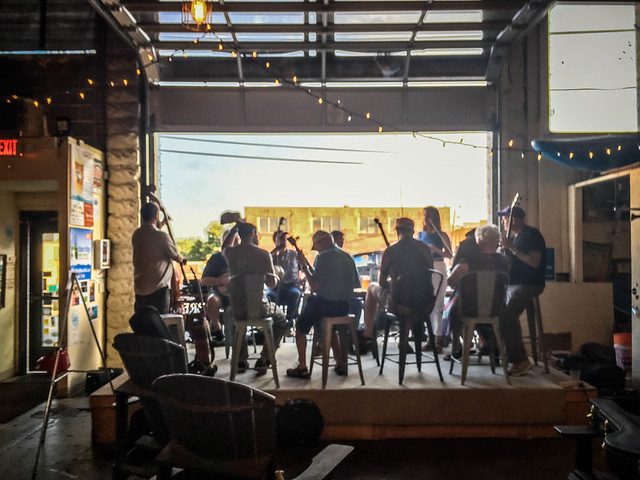 Now that I’ve started looking closely I’ve found many more music making opportunities than I thought possible in our area. This past week I was able to check out two more of those venues, one with blues-oriented rock, and the other with old time mountain music.

The first session was Sunday afternoon with the Upstate Acoustic Guitarists Meetup. This was my third event with the group. The first was the Irish session at Fitzpatrick’s a couple of weeks ago, then the new member jam session the Sunday before. This Sunday was billed as a “Summer Acoustic/Electric Jam.”

Since this was going to be acoustic/electric, I loaded up the car with just about everything I thought I’d need – amplifier, Martin guitar, bass, banjo, melodica, and all the associated gear. Even with all of that I didn’t have everything I needed.

The event took place in the home of Susan Reiner in Moore. Others were already there jamming in her basement when I arrived. I was welcomed and set up my gear in a corner of her home studio. There were already several guitarists (electric and acoustic), a bass player, and a drummer. I recognized a few of them from the previous week’s session. 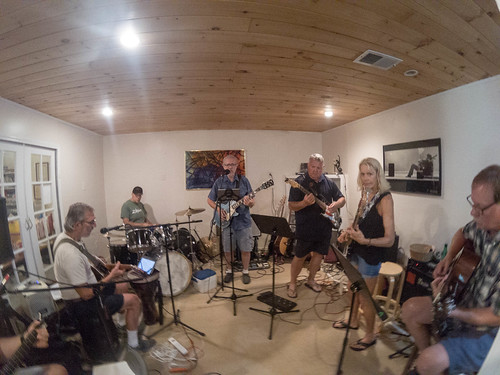 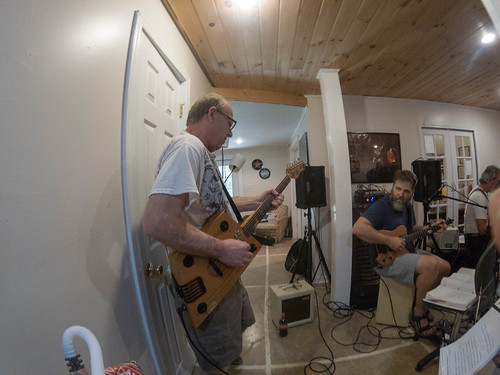 I played guitar with them on some songs, but had the best success on my melodica. Now I was really wishing I’d brought a microphone to amp the melodica. I need to figure out some sort of electrical pickup for it. Even so, I enjoyed jamming on some blues with the group on the instrument. Here is “Stormy Weather”, with Susan on vocals.

I played banjo on “Wagon Wheel” and “Take It Easy,” then switched back to guitar for awhile. I was having a blast.

Several others arrived with only acoustic instruments. Susan suggested that an acoustic-only group break off and move upstairs. I went with them. We played a few tunes and took to the piano to play “Let It Be” with the group.

We headed back downstairs and played a few more tunes and were still going strong when I realized the time. The afternoon had slipped away and it was already an hour past the time I’d told Laura we would be done. I thanked my hosts and said my goodbyes, taking to trips to haul all my gear back out to the car.

The session was loads of fun and the Upstate Acoustic Guitar group continues to be an excellent musical outlet.

I was curious what music sessions were in North Carolina. I’d found an incredibly complete listing online, but there was no way I could even sample all of them. I saw that the French Broad Valley Musicians Association (FBVMA) held weekly sessions in Hendersonville, so I decided to check them out.

FBVMA does old time mountain music. Although it uses similar instrumentation, this is not to be confused with Bluegrass or whatever the heck they play at the Pickens Flea Market. It is primarily Appalachian fiddle tunes used for dancing with a ballad or folk song thrown in here or there. It’s the same type of music I played at The Stomping Grounds the previous Wednesday.

The regular Wednesday venue for FBVMA is Sanctuary Brewing in Hendersonville. I found it on a side street about a block away from the old court house on Main Street. 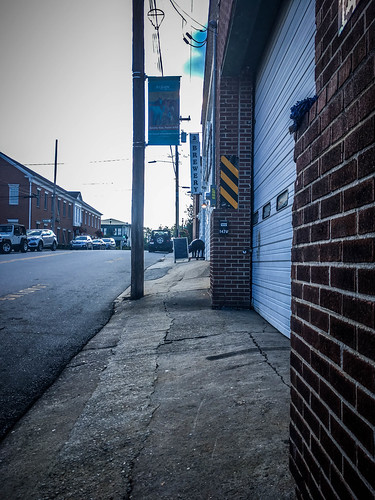 When I walked in I was confused. A woman was setting up chairs on a stage next to an open garage door-like space and a guy was getting a banjo ready. I asked if this was a performance or an open jam, and the woman, Carol, said that it was an open session. The stage was an anomaly and this was the was the first time they had used it. Normally they play in a corner.

I retrieved my instruments and grabbed a spot on the stage with the other players. There were two other guitars, five banjos, several fiddles, an upright bass, and later an autoharp player. It was tight on the small stage, but we managed.

One of the banjo players recognized me from the previous Wednesday’s session in Greer. Speaking of banjos, all were playing claw hammer on open backed instruments. These were spectacular. One guy had a solid cherry banjo that weighed a ton, but played beautifully. Another had a bridge with intricate woodwork holding the strings in place. I decided, wisely, to leave my banjo in the case and stick with guitar. 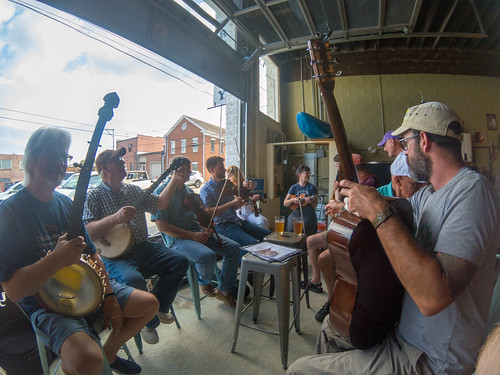 Before starting, Carol asked if we had any problem sticking to the key of D. I had no problem with it. In fact, it made things incredibly simple for me. I just had to worry about three chords most of the time, with maybe a minor thrown in here or there. The flip side was that it could get tedious if I let it. The trick was to throw in some bass runs and improvisation so that it didn’t get tedious.

We jumped right in with the tunes and it was glorious. The music rang out through the open space and spilled out onto the street. I’m sure you could hear us all the way up on Main Street. We started with tunes that sounded so familiar, but I just couldn’t place the name, such as this one.

As with so many sessions I’ve played, the choice of tune went around the circle. There were several sheets of paper in stools in the middle of the circle with a list of common songs that the group played and folks often consulted the list before making a selection. No one used any sheet music. No “dot-players” here.

Many of the titles on the sheet were unfamiliar. Mostly I just followed along with the chords, but I did recognize a few of the tunes. We played “Bonaparte’s Retreat” and I did a flat-picking solo on “Pale Wildwood Flower.” “Angeline the Baker” was one that I remembered from my sessions out west.

At some point we switched from the key of D to the key of G, which made the banjo players happy. This threw in some more intricate chord changes and I liked the variations. The music had been enjoyable, but simplistic compared to some of the Celtic tunes. I was happy to throw in a minor chord here or there.

The one drawback to the venue, apart from the cramped stage, was the heat. Fans had been going, but the largest cooling fan had been turned off because it made too much noise. There was no air conditioning. Fortunately, the venue did provide libations. There was a strip of perforated tickets in the middle of the group. If you were a player, you could rip off a ticket it and redeem it for a beer. I availed myself of a ticket and had a very nice, light Kolsch.

I played with the group for a couple of hours but the heat did start to get to me. I left a little after 8:00, but it looked like these guys could keep going all night. I said my goodbyes, making plans to return soon. Maybe I’ll be brave enough to play the banjo.

So it looks like I have found ways to fill the musical gaps. Laura complains that she could be a “musical widow.” Next week I start back with the Greenville Chorale, so that means a rehearsal Monday night, Old Time Music on Tuesday, and a Celtic session on Wednesday. I’m sure I could find something for Thursday and Friday if I wanted.

My plan is to hit a couple of these pretty hard had heavy at first to establish myself as a regular, then scale back. However, I still have more to explore. 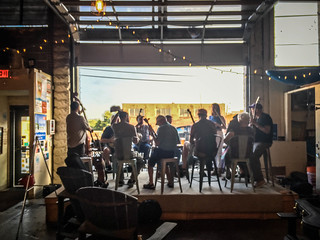