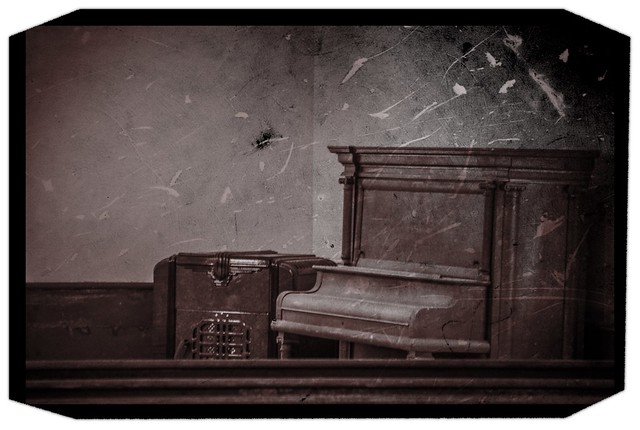 I have let things slip. Yes, it’s been another writer’s block stretch. For one thing, it’s just been too hot to get out and do much of anything. Temperatures have been reaching nearly 100º for almost the entire month. That’s crazy. By this time we should be enjoying fall weather.

I’ve been doing research and some exploration, but nothing that would make a whole blog post. I’ve posted things to Flickr and to Facebook, but not here. So, I’m going to do a catch-up/update post with a few miscellaneous items, then do several shorter separate posts.

I had written about Brad Willis’s podcast, Murder, ETC, in a previous post. Brad’s continuing investigation into the 1975 murder of Greenville narcotics detective Frank Looper has taken on a life of its own. The Emrys Foundation had invited Brad to give a talk at the Velo Fellow Pub in Greenville, and I decided that even if I had to skip a Chorale rehearsal (which I did), I was going to attend.

Brad did a great job telling the origins of the podcast and how he has meticulously gone about the process of reporting. Several of his former colleagues from WYFF were there, as well as a writing class from the Governor’s School. My friend Leonard Brown, who is heavily involved in the podcast, as was my good friend Alan Russell.

I also got to meet Charles Wakefield, Jr., who was convicted for the Looper murders and is now out on parole. He seemed like such a gentle, somewhat lost soul, that it was hard to see how anyone would think him capable of a random murder.

More importantly, Brad and I finally got to meet face-to-face. We’ve been online friends going on fifteen years now. I got a shout-out from Brad as his “invisible Internet friend.” Now I’m no longer invisible, and it was great to finally meet in person.

Helen (Hell in) Georgia and Oktoberfest

The season of Oktoberfest is winding down. According to tradition it runs from mid-September through mid-October, and not through all of October, as some might imagine. Toward the end of September I like to go on an outing to find good German food. This year Ken Cothran, Michael Brown, and I decided to head to Helen, Georgia, where it’s Oktoberfest year-round.

We headed out on a beautiful, but hot late September day. I picked up Michael in Travelers Rest, then headed to Clemson to grab Ken. From there we drove straight on over to Helen so that we could arrive for an early lunch.

As one might imagine, there are lots of options for German food in the town. The Troll Tavern seemed less pricy than some, and its location right next to the river seemed ideal.

The setting was nice, but the food was…so-so. Brats and sauerkraut are hard to screw up (though it is possible.) These were OK. But instead of German potato salad they served mashed potatoes and a simple slice of loaf bread. Oh well. At least the beer and the company were good.

Hell In Georgia is a tourist trap. Period. The kitchy architecture is only Alpine in the remotest sense and the crap inside the shops could just as easily be in Pigeon Forge or Myrtle Beach. It might appeal to someone who has never been to Bavaria or knows nothing about the region. We wandered around a bit anyway, but couldn’t take too much of it.

There are lots of tattoo shops, and they seem to be obsessed with jerky. We so no less than three jerky shops in a one-block area. Apparently, the more exotic the animal, the better.

I think that will be my last intentional trip up to Helen, unless someone else just insists that we go. There are some interesting things to see in the region outside of the town, so I won’t say that I’ll NEVER go back, but…

With my schedule as crazy as it’s been lately I haven’t had a chance to get up to Haus Heidelberg in Hendersonville for some decent German food. I did buy bratwurst and sauerkraut for a meal at home. However, I had trouble finding good German potato salad. None of the higher end grocery stores in town had it. I finally found a can of it at Publix. It was good, but still not quite right. I may still have to make a trek, even if Oktoberfest is technically over.

I still try to get over to the Pickens Flea Market every Wednesday. I kind of miss walking through the market and browsing the stuff for sale, though. I’ve been trying to get there a bit earlier to do just that. Apparently I’ve become known as the Banjo Man at the market. On three different occasions as I was browsing people came up to me and asked where my banjo was and if I’d be playing that day.

I think my banjo playing skills have improved. When I first started playing three years ago I could only manage three chords in one key. Now I can play in just about any key (with capo help) and I can play different chord inversions up the neck. I’m broadening my repertoire and I still enjoy playing the melodica. I’ve also made some good friends among the musicians at the market.

Josh and Sarah at Smiley’s

Laura and I went to hear our niece and nephew, Sarah and Josh, at Smiley’s Acoustic Cafe one Sunday afternoon. Josh and Sarah always do a great job. My sister Ann and her husband Merritt were also there, and it was great to see them. Ann and Merritt took a couple of turns with their kids on stage.

We were most impressed with the brunch options at Smiley’s. I got some excellent shrimp and grits. Even more impressive were the $2 mimosas. I think we will be back.

I got a Facebook invitation to attend the Dam Jam at the Glendale Shoals Preserve, just on the other side of Spartanburg. I’d never played with the group, but since my banjo skills were improving, I decided to give it a shot.

When I arrived, fellow explorer and blogger Mark Elbrecht was already there. He had been hiking around the area and photographing the old mill, dam, bridge, and the iron works upstream on Lawson’s Fork Creek.

The jam itself was on the old steel trestle bridge, now restored as a walking bridge.

There were more banjo players than guitar players, and most of them light-years beyond me. I met one clawhammer player, Mike Felt, who started teaching at Byrnes after I left the district and who is now pursuing a degree in Instructional Technology. He had also jammed with Josh while Josh was teaching there. We had quite a bit in common. Mike’s brother was also there playing Scruggs-style banjo.

Even though I was the least skilled, I was still able to hang with the group and even took the lead on a couple of songs. Most of what they played were old gospel songs, which I know so well. I was surprised that there wasn’t much bluegrass or country music.

Mark took photos of the proceedings. The following are his photographs.

He also shot some video. Here’s “I Saw the Light” followed by me leading “Amazing Grace.”

I stayed for a couple of hours but it was clear that the rest of them would keep going. It was just too dang hot for me. As I left I found another group doing a more informal jam in the shade at the end of the bridge. They wanted to do more bluegrass than gospel, as well as avoid the heat. While it was tempting to join in with them, I kept going.

I finished out my tenure with Hopewell Methodist Church. The last piece I did with the choir was a rocking Mark Hayes version of “Leaning on the Everlasting Arms.” Things went well for my last two Sundays at the church, which was a good thing.

My last official duty was to oversee a concert by the Upstate Gospel Pickers in the church’s outdoor brush arbor/amphitheater. I had been playing with the Pickers once a month on Thursdays, and they had decided to give several concerts. Hopewell was to be a practice concert for the group.

Eleven pickers showed up for the event. Most were guitar players, with me on banjo, one mandolin, and a bass player. The concert went well, with a few audio issues. We’ll refine that for our next two gigs.

My friends Jeff and Lori Holland have been holding some great drumming sessions, but they have been at times that I couldn’t attend. Now that I no longer have choir rehearsal on Wednesdays I was able to join them for a session at the Greenville Unity Church.

There were about a dozen drummers in attendance. I was the only one not a regular part of the church. Lori Hopkins and I were the only two that had brought our own drums. Jeff had brought his large collection of drums as well as other rhythm instruments. We played for about an hour, long enough for my fingers to start hurting. It was a great way to distract me from thoughts of choir.

The Chorale started their rehearsals on Labor Day, screwing up that holiday for us, and their concert will be at the Peace Center on October 19, the weekend of Furman Homecoming, yet again screwing up Homecoming for me. Someone needs to talk to Bing about this.

The music almost makes up for the personal inconveniences, though. We are doing the Mozart Requiem, one of my favorites. I’ve done it several times before, but this is a new version with a couple of twists and turns. The second piece on the concert is the Bach Magnificat. I’ve done this one about as many times as the Mozart. We used to do an English version of “Sicut Locutus Est” as an All-State Honors Chorus audition piece, so I know it from memory. It should be a good concert.

My next-door neighbor, John, called Laura over. I was worried that something might be wrong at their household, so I came over as well and found Laura and John sitting in their front yard surrounded by puppies. John’s son, Woody has a Ginger Lab named Daisy, and they had bred her. Daisy had seven puppies.

Daisy is a sweet dog and we try to give her treats when we see her. We had noticed that she had not been around recently and just thought that she was off with Woody somewhere. These puppies are extremely cute and made me start thinking about getting a dog (very briefly.) Woody has already found homes for just about all of them, though.

John did call me over to puppy-sit while he did some cleaning, and I was able to sneak some photos. These guys are about five weeks old, still too young for adoption, but growing fast.

Speaking of cute babies, I saved the best for last. My niece, Lauren, had her second child about seven weeks ago. Glynda and I made the trek up to Charlotte to meet Levi Murphy Stines. We had a great time visiting with Lauren, my brother Stephen, and Levi’s older sister, Ronan.

My other brother Houston and I had been the photographers at Lauren and Daniel’s wedding, and Lauren wanted me to take photos of Levi. I readily obliged.

Of course, Ronan couldn’t let her baby brother get all of the attention.

It was great catching up with family and seeing the latest addition to our family.

So that’s what’s been happening lately. I do have some other writing projects in the works and will be posting those here shortly.