I must have driven by it a thousand times – an old Pizza Hut with the distinctive architecture now converted into another restaurant.  However, this time it caught my eye.  Laura and I were on our way back from a paddling trip.  Later we would be back up this way for a play at Furman, and we needed a place for dinner.  The sign read “Lobster Stuff Shells” and my mind started pondering the meaning of “Lobster Stuff” and what that might entail.  From those musings we decided to give Bocca Pure Italian a try.  A grammatical error caught my attention and got our business.

I really couldn’t find much substantial background online. The information on the restaurant’s website and Facebook page is rather sparse. Bocca has been here a number of years, but I don’t remember exactly when. Oddly enough, I don’t remember any of our friends or Furman colleagues mentioning the place as a dining destination. We had absolutely no point of reference.

The folks at Bocca have done a fantastic job given the restrictions of old Pizza Hut architecture. The exterior has been redone in gold tones, and those same rich tones with wood accents grace the interior. The wall spaces between the unusually angled windows have been outfitted with shelving for the restaurant’s extensive wine collection. The dining area is relatively small, and the counter is in the same location as the old Pizza Hut cashier counter. 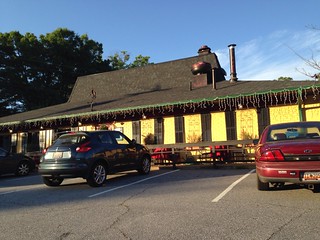 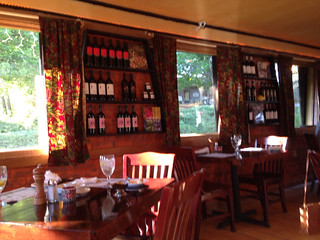 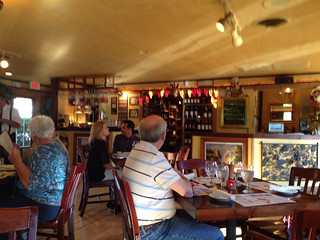 However, the counter was radically different from PH days. I didn’t get a chance for a photo, but a split in the counter allowed access to a room with a larger collection of wine and what was apparently a small wine bar. I did spot a couple of patrons there during the course of the meal. The proprietors have added additional cooking and storage space to the original building. Apparently there is a studio kitchen which can be used for cooking demonstrations.

As for clientele, it was definitely an older crowd, with ages averaging in the 60s. I guess the best description could be “relaxed affluence.” This was obviously not the spot for high schoolers and Furman kids to casually drop by for a pizza. Even so, as we dined, two young prom couples arrived.

When we arrived we were asked if we had reservations, which we didn’t. Apparently we got the last non-reservation table. We watched several others get turned away over the course of our meal. The place was packed the entire time.

Traditional Italian dishes dominate the menu. There are several antipasti selections, including Bruschetta, Ensalada Capresse, and some more unusual dishes such as Scallops au Gratin, Italian Rope Sausage, and Mussels Piccata. All of these are reasonably priced from $6-$9.

There are quite a few specialties with seafood, chicken, veal, beef and Italian sausage. These include Rigatoni, Shrimp Carbonara, Cheese Tortolini, etc. These run from $16 – $24.

In addition to these specialties there were several classic veal and chicken dishes priced at $18.50, and several specialty pizzas for $14.50.

One innovative menu item is the “Personalized Pasta” selections. You pick the type of past, the type of sauce to go on it, and the meat (if any.) Prices vary according to selection.

And if that weren’t enough, there are the daily chef specials, of which the Lobster “Stuffed” (corrected on the display board inside) Shells and a Surf and Turf.

As mentioned, there was an extensive wine selection. Prices overall were more expensive than a casual dinner out, but are in line with a nice Italian meal.

Since we ordered chicken dishes, we ordered glasses of Pinot Grigio to go along with the meals. These came out first, and were quite good. However, I should have ordered something else. The lighter Pinot didn’t hold up well to my heavier dish. More on that later.

Salads arrived first. These were simple beds of Romana with a slice of tomato, some onion, and dressed with vinagrette. They were quite good. 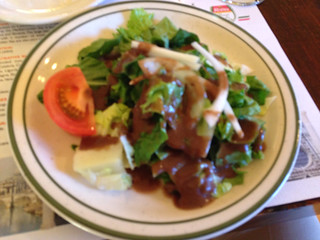 It took a bit of time, but our dishes arrived. Laura’s dish had a light lemon piccata sauce with capers, garlic chunks, green beans, and angel hair pasta. She let me have a bite, and it was fantastic – light and flavorful. 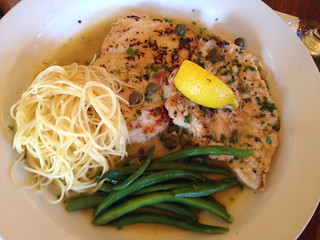 My dish was heavier, but no less delicious. My chicken was covered with sundried tomatoes, fresh tomatoes, spinach, and mozzarella. It was accompanied with linguini covered with a light marinara sauce. Mine also had the ever-present chunks of garlic. Again, my Pinot Grigio was a bit light for the dish and I would have been better off with something red. 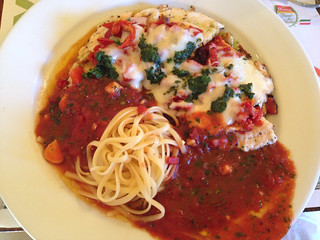 In places such as Olive Garden they grill up a bunch of chicken breasts and toss on whatever sauce is needed to create the dish. Not here. Even though we both had two thin (but large) slices of chicken breasts, each was prepared specifically for the dish.

The flavors were marvelous, and both of us cleaned our plates. Unfortunately, we had saved neither time nor space for dessert.

There were just a few problems, but none that greatly upset the course of the meal. First off, two waitresses arrived for duty about a quarter after six. Apparently one of these was assigned to us. Also, as “non-reservationists” we seemed to fall in the cracks. Other tables were told about specials and brought bread, but not us. I might have tried the “Lobster Stuff” otherwise.

We never really knew who was supposed to be serving our table, and none of the serving staff seemed very friendly. It was if we were intruders. My feeling was that from the point we were seated we were customers just like any other patron in the place. Laura made mention that we were “taking up one of their tables”, to which I replied, “Well, they seated us, and they had the choice NOT to do that,” so I didn’t worry about it.

In fairness, the place was busy with a couple of larger groups. There were several servers for the small place, but it seemed to lack…friendly efficiency, I guess. We got our food in time, and we eventually got our bread, but timing was always beyond the point where we were starting to wonder. I would hope that isn’t the case on a less busy night or when the staff shows up when it should.

The quality of the food was excellent. The dishes seemed to have an innovative flair, but with a basis in traditional Italian cuisine. It made me want to come back and try one of their specialties. Service was so-so, but I’m hoping that’s not par for the course. Bocca Italian is a bit pricy, but not out of line for a nice evening out with food quality this good.

This was quite a surprise, and it’s nice to know that food of this quality is so close to Furman. I’m sure we will be back.