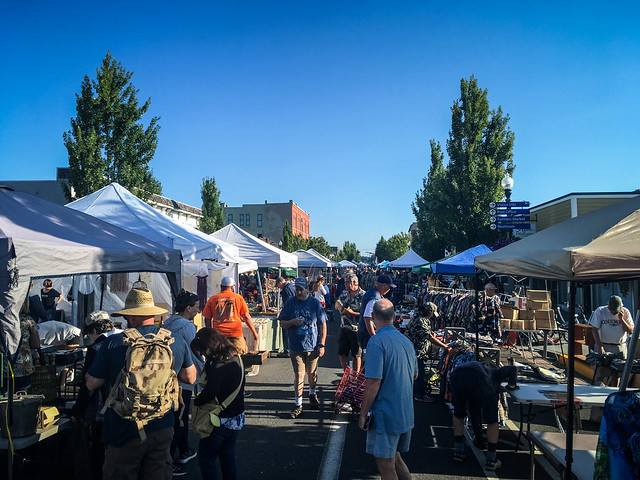 When we were living out here in Washington I bemoaned the dearth of flea markets like the ones we had back home. There just weren’t any that met on a regular basis. There were yard sales and annual events, but no weekly markets like the Anderson Jockey Lot or Pickens Flea Market. What the PNW markets lack in frequency, though, is more than made up in quality. Such was the case with the Anacortes Shipwreck Fest this past Saturday.

Some decades ago local fishermen would gather once a year to sell and swap gear in Anacortes. Sometimes this spare gear would be turned into works of found art. This grew into a tradition that involved the entire community. Now sponsored by the local Rotary Club, the Anacortes Shipwreck Fest is an opportunity for civic groups to raise money, as well as for vendors and other groups to sell their wares. It’s a huge flea market/yard sale for pretty much anyone.

Duff and I wanted to get there early, as close to the event’s 8:00 am opening as possible. We got there early, but there was already a crowd and we barely found parking. The main street was lined with booths.

There were quite a few antiques dealers.

There was some artwork and some oddities.

As the name of the event implies, there was lots of nautical items for sale.

Many of these vendors were civic groups trying to raise some money. I guess they had goods donated or had been collecting throughout the year.

Duff and I were surprised at the number of booths selling Hawaiian shirts. It’s almost as if someone told these groups, “Hey, I bet you can sell these to raise funds!”, kind of like how I’ve seen groups sell mattresses, light bulbs, and just about anything else.

It seemed like the sale went on forever. We walked the whole thing. I did find a couple of deals. First up was a Nikon Coolpix L120. This camera is similar to the one I keep in a dry box in my kayak. It’s an inexpensive camera with a zoom lens, but it takes decent photos. I got my first one so that I don’t have to carry my good DSLR to get zoom capability. For this find, I was able to get the camera for $20. I plan to leave it at the island house so that I always have one available.

I’ve only taken a few pictures, but it does a great job.

At the Skagit County Yard Sale a couple of years ago I found my Alverez guitar. I’ve been looking for a cheap guitar to leave up here so that I always have one available. I hadn’t seen anything but junk at this sale and was about to give up when I spotted a black pseudo-leather case.

The guitar inside was a Randy Jackson guitar. I’d never heard of that type. I’d heard of Randy Travis and I’d heard have Alan Jackson, but not Randy Jackson. It was an acoustic cut-away with tuner and pick-ups.

The woman at the booth told me to make her an offer on it. I said I didn’t have enough information for even that. She said she’d sell it for $50. For the case, guitar, extra strings, strap, etc., etc., I decided it was worth it. She also asked where I was from. When I said, “South Carolina,” she replied, “Oh, I thought you sounded like you’re from New Zealand.”

The guitar has never been used and was still in plastic wrap. It plays OK – not the best, but enough to get by. That’s just what I wanted, a guitar that does the job but not so well that I want to take it back across country with me.

Apparently Jackson is a bassist, record producer, and judge on American Idol (which I’ve never watched.) . He started selling this “Diamond Limited Edition Guitar” exclusively on the Home Shopping Network back in 2012 for around $300. I have no idea who really makes these guitars, but apparently I’ve got number 5245 of 10,000. Oh boy!

I think $50 was the right price, even with a built-in tuner and leatherette case. Of course, Laura’s favorite thing about the guitar was the emblem on the back.

It was interesting seeing all the things for sale and finding a couple of bargains, but it was also sensory overload. Perhaps it’s a good thing that this part of Washington only has annual or semi-annual sales and not weekly flea markets. Even so, it was still a fun day.