My mother and my sister Glynda wanted to get out and about. Mom likes to rambling and explore as much as any of the rest of our family – we came by it naturally. It was a beautiful but chilly spring day, with dogwoods and azaleas in bloom, so we decided to drive across country to Grits and Groceries for lunch.

Glynda and I had been here before. When we got here today, the interior was crowded, but we were able to find seats at a table with two ladies who were just finishing up. They were quite friendly, so it worked out.

The last time I was here I was taken to task for not trying the tomato pie. I wasn’t going to make that mistake this time, so we started with one of those. It was the size of an overly large muffin, and just enough for each of us to have a bite. I’m glad I tried it, as it was excellent.

All three of us had the pork chop special, which very tasty, but a bit tough. The meal was finished up with a shared blueberry crisp. Again, it was good, but overly sweet. I could only finish a few bites. This visit wasn’t as good as the last, but not so bad as to keep us away.

After lunch we decided to explore some more. We continued through the country, passing through the community of Antreville until we got to the outskirts of Abbeville. The last time Alan and I were down here exploring, I saw that we had missed an opportunity to see South Carolina’s tallest tower. We decided to try to find it.

On the Highway 28 bypass it was hard to miss. The Prysmian Tower really didn’t look that tall or impressive with nothing around it to give it context. 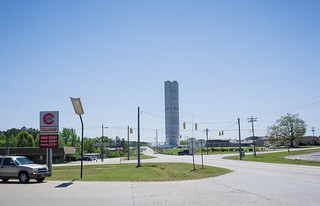 The tower is 373 feet tall, or about the height of a 30 story building, and is used in a vertical vulcanization process for making copper wire for power cords. That’s all I know about it. We tried to get another shot, but traffic was making it difficult to get a good angle. The photo below was shot through the windshield, and has some unfortunate reflections: 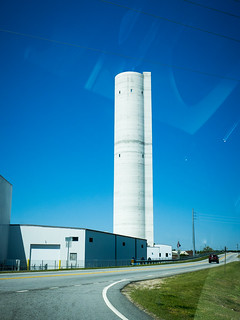 I was able to find a time-lapse video of the construction of the tower, though.

We drove through the town admiring the historic homes and buildings. I wondered what progress had been made on the overgrown Thompson Cemetery Alan and I had found. The mayor of the town, Sarah Sherwood, and a work crew were trying to clear the cemetery. What we found was that they had made fantastic progress, and the cemetery was mostly clear. Here’s a shot from our previous visit… 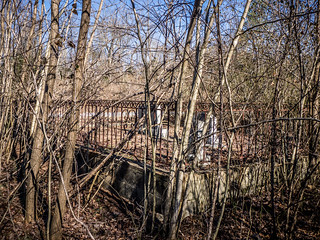 …and here’s the same area now… 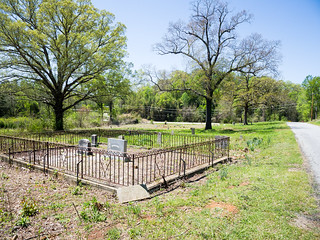 With the area cleared we spotted a couple more very interesting headstones. First up was this hand-carved headstone: 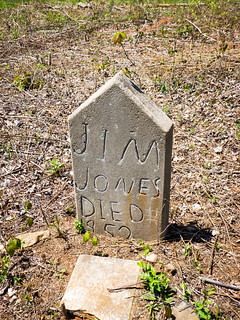 The stone is cast concrete, rather than solid stone. I couldn’t tell if the date of death was 1852 or 1952. It looks like this stone replaced another cracked hand-carved stone right below this one. Would they replace a hand-carved with another hand-carved? Also, 1952 doesn’t make sense for such a rustic carving, but who knows.

Another puzzle – This stone reads “Husband and Mother”, yet there is only one name, Alice Watt. If that applies to one person, it seems mighty progressive for late 19th century sensibilities. 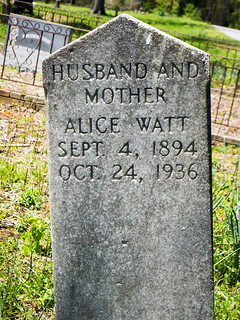 We circled back through Shoals Junction, Ware Shoals, and eventually made it back to the house. It was a nice outing on a beautiful spring day.